I’ve now hit the point in my pregnancy when it has suddenly dawned on me that we really are about to have another baby – and how soon that moment will arrive. We’re now closer to Peanut’s arrival than we are to Jessica’s death which brings the reality of it all back into sharp perspective. In all honesty, I think we’ve been in denial about it all in many ways. Jessica’s loss has been so all-consuming that we’ve not been able to focus at all on preparing ourselves for another child to enter our lives. 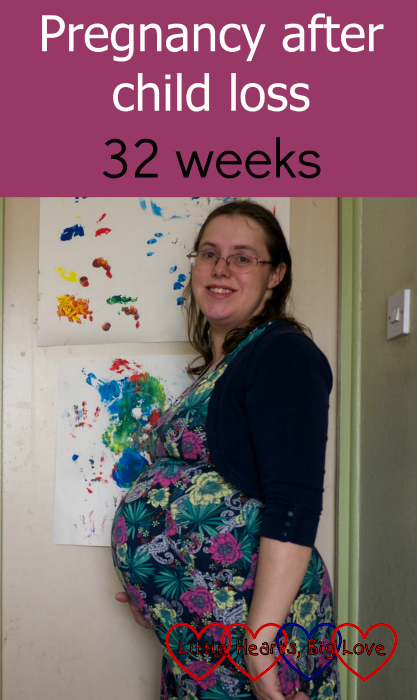 Emotionally, I still feel very detached from this pregnancy. I am sure that I will love Peanut when he or she arrives. Right now though, I find it hard to bond with this little one who is still an unknown personality when my heart aches so much for my big girl. There’s also an awareness that Peanut’s arrival in many ways represents a big shift away from our old family life. A while back, I wrote about grief being like a stormy sea and our life with Jessica being like a island that we have forever been exiled from. Peanut’s arrival will bring us to a new island – one that Jessica never set foot on.

It feels like we will have two different family lives – each with two children. A life with Jessica and Sophie that is forever in the past and then a life with Sophie and Peanut that will be our future family life. I know that Peanut will never take Jessica’s place but I’m scared of the big shift that will come with his or her arrival. Of how our lives will change again and we will be building this new family life that Jessica was never a part of. I’m worried about how I will cope with sleepless nights once again and the emotions that will come with that.

It all feels very daunting at the moment. Some of these worries would have been there anyway, but I know if Jessica was still with us, we would have been excited about it too. She would have been so excited herself; so looking forward to being a big sister again. Sophie is starting to show some excitement about Peanut arriving though which is lovely. I am sure that she will also be a lovely big sister.

Physically, I’m still reasonably comfortable most of the time. I definitely have a bit of a waddle now when I walk and my pace has slowed down a lot. I can’t quite keep up with Sophie these days when she is running around. It’s just as well that she is generally very good at staying close and holding my hand on the preschool run! I have moments of feeling a bit like a beached whale when trying to get up from sitting down – especially if I’ve been sitting on the floor with Sophie. My back and hips can be quite achy at times, particularly when I first get up and start moving about.

It’s been lovely to have the sunshine lately, but I do struggle with the heat at times. Jessica and Sophie were born in September and October so I’ve been heavily pregnant in the summer each time. Thank goodness for having lots of fans in the house! I’m also starting to find now that my feet get quite puffy by the end of the day – especially on hot days,

I’m now at the stage where everyone around me constantly comments on the size of my bump – normally to tell me how big I’m looking. I think I was bigger at this stage with Sophie though! It’s also the stage where you suddenly seem to become public property and people like to come up and pat your bump which drives me crazy. I’ve never liked that invasion of personal space anyway but being more emotionally detached this time around makes it worse.

My care has been transferred to a new consultant who is much better than the last one. He was much more compassionate and seems to be good when it comes to explaining options and making sure that I know where I can access support. One thing I did notice was that he made recommendations without using the word “allow” which was reassuring. There’s a big difference between giving women informed choice and telling them they’re not “allowed” to do certain things.

The growth scan measured Peanut as being a similar size to Jessica at the same gestation. The consultant was a little concerned that Peanut’s growth had dropped below the centile line from last time. However, when I looked again at the measurements from the previous scan, it turned out that the other consultant had plotted them in the wrong place on the chart and that Peanut’s growth is actually following the same centile line after all. Peanut was also breech on scan so I’m hoping that he or she will turn around before deciding to arrive! 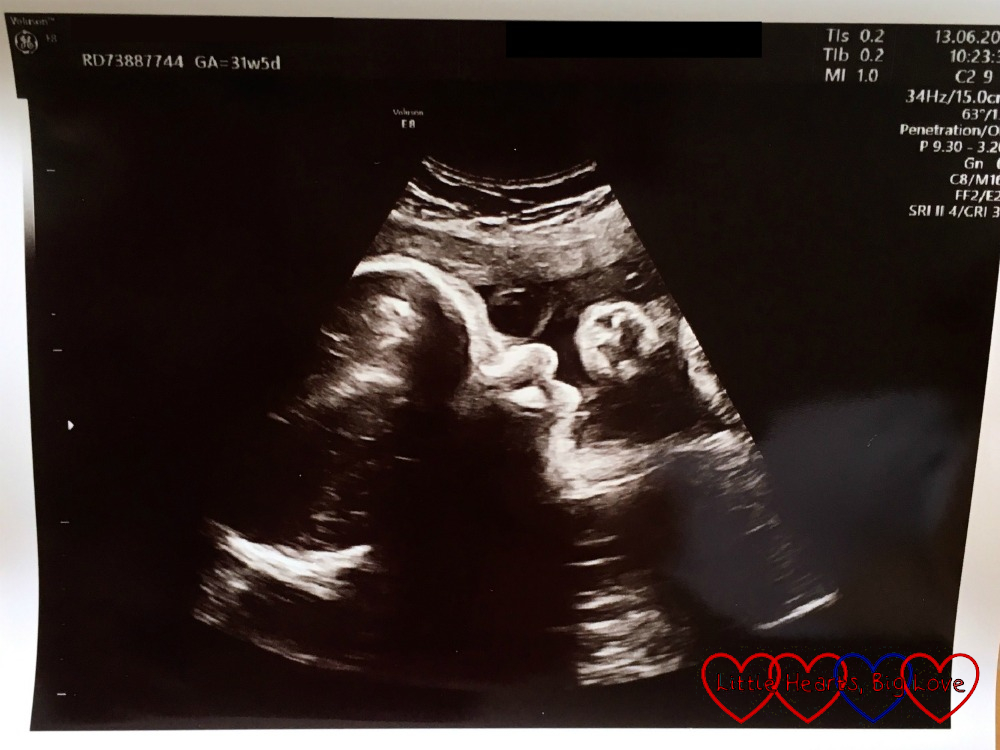 Hubby and I were also referred for genetic testing as we have found out that Jessica had a small deletion on one of her chromosomes. The geneticist didn’t think it was significant with regards to either her heart condition or her death though and it’s unlikely to cause any concerns with this baby. It will be about six weeks before we get the results of the tests though.

Peanut is definitely a little wrigglebottom! I get lots of big kicks and wriggles and he or she has hiccups several times a day. The hiccups always make me think of Jessica and bring back memories of her in-utero surgery.

I’ve been in contact with my lovely health visitor, who helped me through having post-natal depression with Sophie. She will be looking after me again which is reassuring. My lovely independent midwife friend has also referred me to the local perinatal mental health team to try and make sure I have some support in place before Peanut arrives.

Overall, things seem to be progressing well. I just need to start preparing myself for this little one’s arrival. The baby clothes are still in the loft along with everything else and we still need to buy a car seat and new mattress for the Moses basket.

If Jessica had still been here, I know we would have been much more organised. We still haven’t sorted out the spare room ready to turn it into a new bedroom for Sophie. Her bed and Jessica’s are still in our room as they have always been. We need to move one of them to make space for the Moses basket. I know that we could always dismantle Jessica’s bed to make room but I can’t bear the thought of doing so. I’d rather move Sophie’s bed into the spare room but we can’t do this until we finish clearing it out. Hopefully we will manage to get ourselves organised and do the things we need to before Peanut arrives!

One thought on “Pregnancy after child loss – 32 weeks”