Legoland has always been one of our favourite places to visit. Our days out there are much more infrequent now that we no longer have annual passes though. Sophie’s preschool often has a Legoland day out in the summer term though which is always fun. For Sophie, it was an opportunity to have a fun day out with her friends in a place full of happy memories. 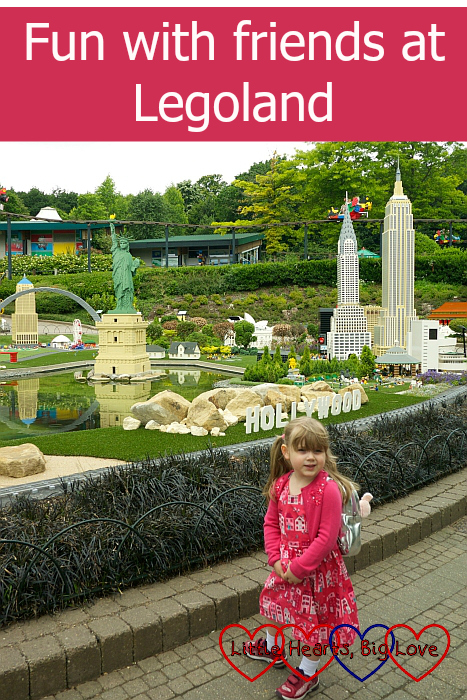 I have to admit that I did get quite tearful as I drove up the hill to the car park. I remembered how excited Jessica used to get about going to Legoland and how happy she was about getting to stay in the hotel back in February.  We had so many wonderful Legoland days out with her and Sophie and I knew that there would be memories of those moments around every corner. 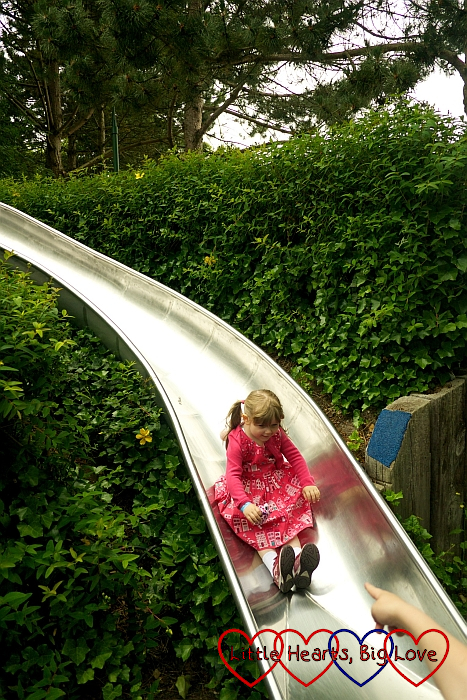 I had prewarned Sophie that there might not be many rides that I would be able to go on with her. I was pleasantly surprised that there were more rides that I could go on though than I had anticipated. We started off with a trip on Sky Rider – a monorail ride with views over Miniland. We rarely went on this ride on our previous days out. This was partly because Sophie was too small for it until last summer, but also because I thought it was a two-person ride. One adult can actually accompany two children on this ride so we could have gone on it on the days when it was just me, Jessica and Sophie. 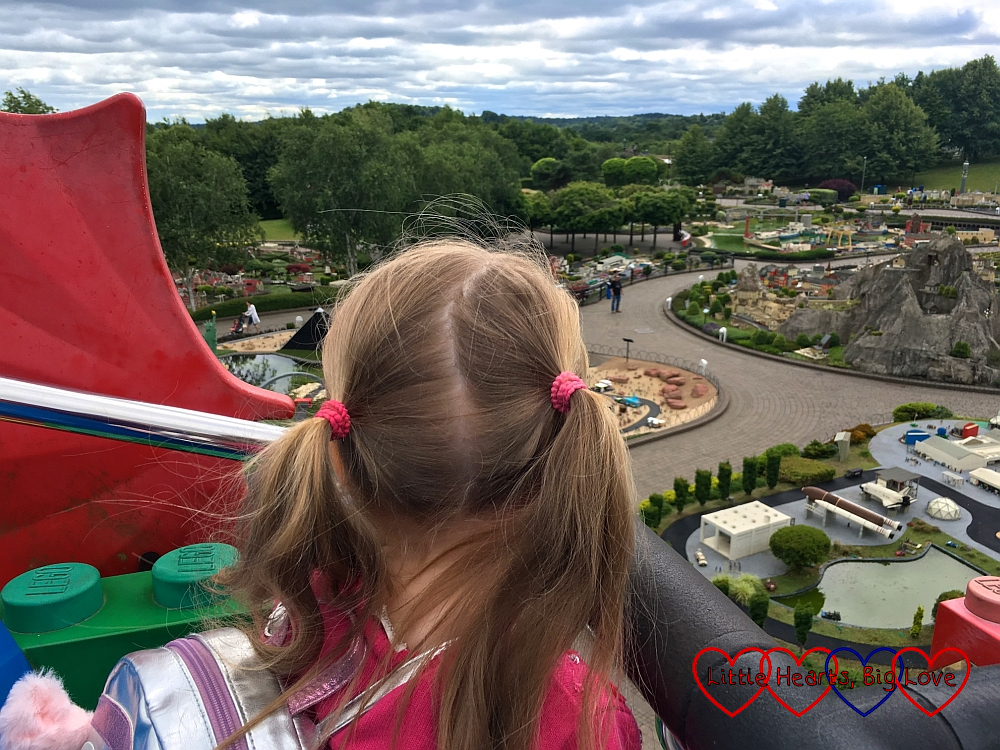 Sophie was keen to head to the Brickville play area at Duplo Valley. We passed through Miniland on our way and had a quick look around the new areas – Miniland USA and Miniland Explore the World. 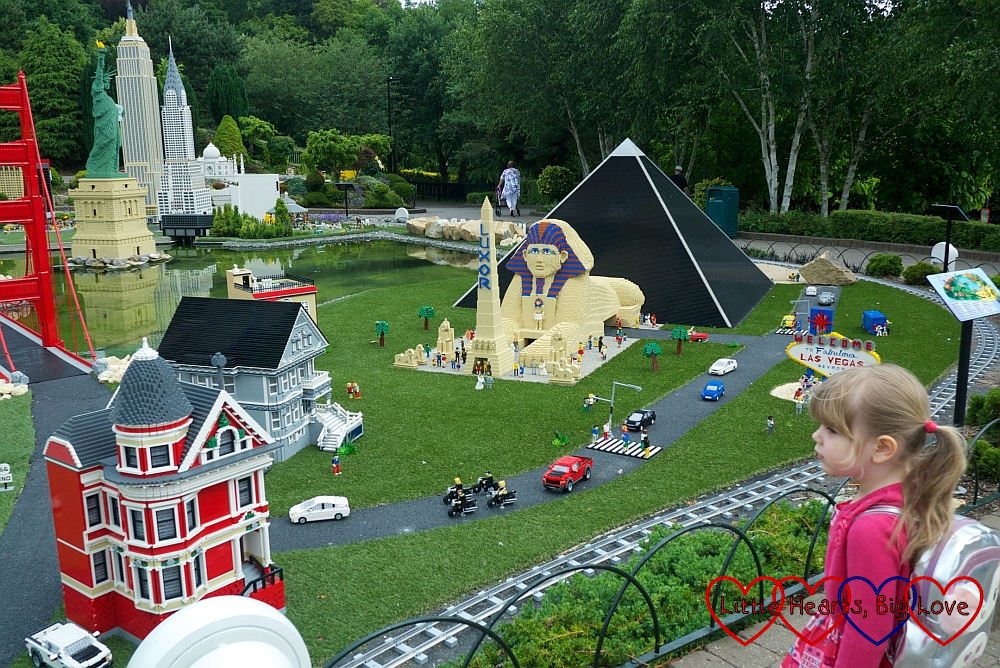 I do love how watching Go Jetters has helped Sophie learn about different landmarks around the world and become interested in seeing them! 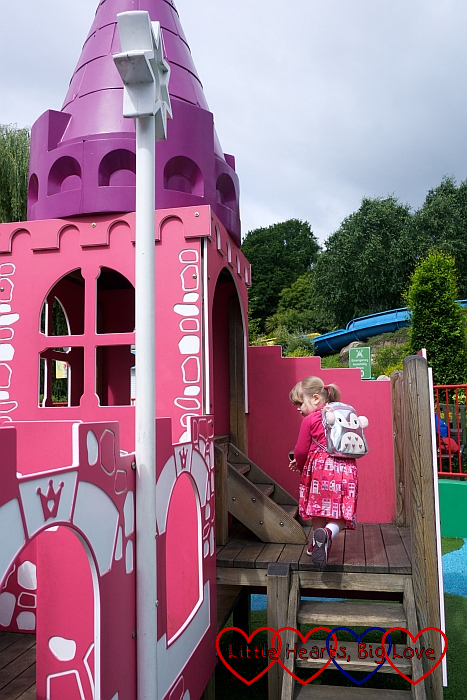 After Sophie had finished exploring the play area at Brickville, we headed over to Fairytale Brook. This gentle boat ride with fairy tale scenes recreated in Legoland is one of her favourites. Jessica always found the Aladdin’s cave tunnel a bit scary though and could only be persuaded to go on it occasionally! Sophie made me chuckle on the way round as she pointed to Hansel and Gretel.

I have no idea where she got those names from!

The Duplo Valley puppet theatre was our next stop – the perfect opportunity to sit and have some lunch while watching the Elves and the Shoemaker. As we waited for the show to start, a little robin came over to say hello. It was another one of those moments that feel a bit like a little sign from Jessica reminding us that she is still with us. 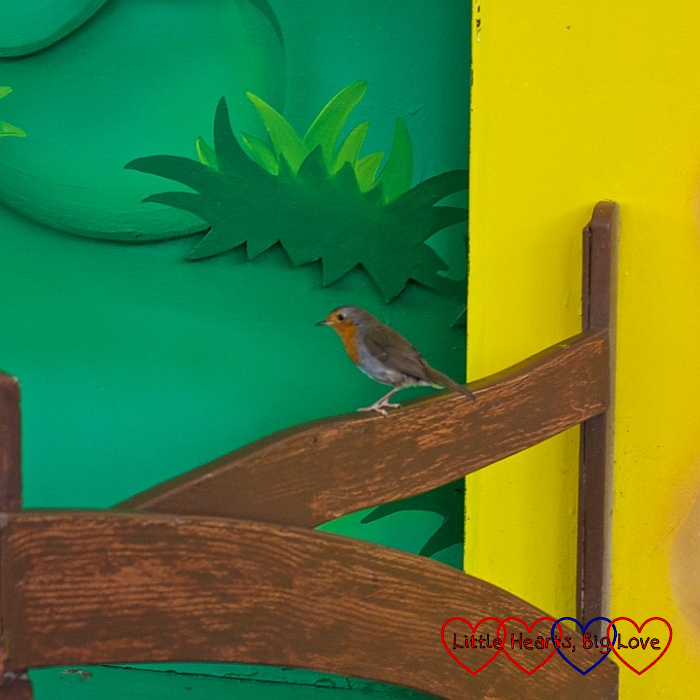 We bumped into a couple of Sophie’s preschool friends at this point and headed over to the Atlantis Submarine Voyage ride with them. They loved this ride so much that we ended up going on four times in a row! 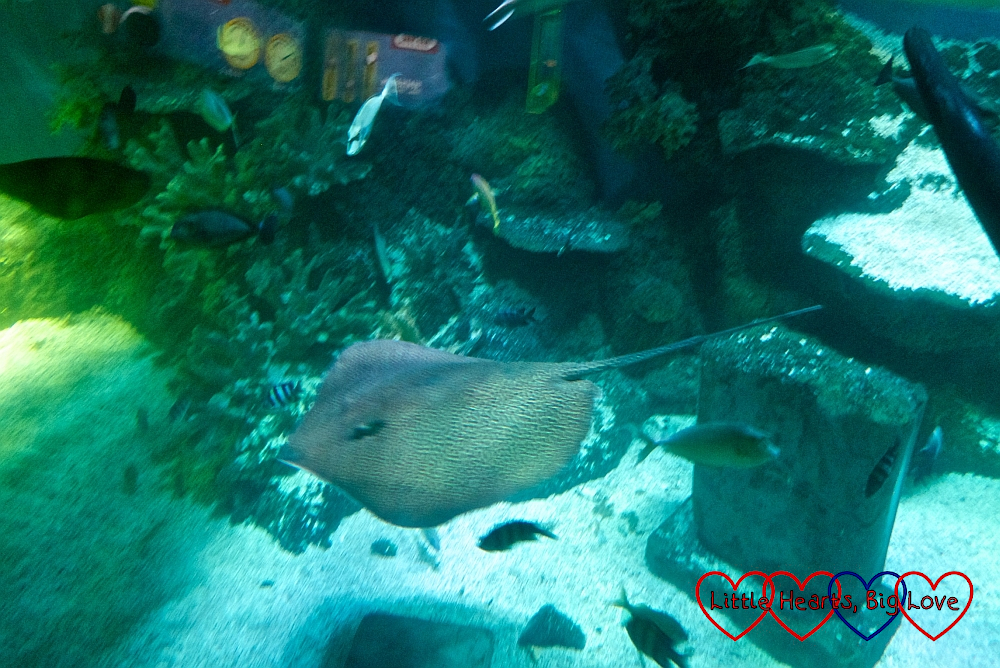 Having met up with friends gave Sophie the opportunity to go on a couple of rides that I couldn’t have taken her on. She loved being able to go on the Spinning Spider with her friends. This was another ride where she was able to stay on and go on again!

Later in the afternoon, her best friend’s mum took her on Raft Racers. I felt a little sad though watching Sophie going down the waterslide on a dinghy. This had been one of the rides that Jessica had been desperate to go on last summer. However, as it’s a two person ride and I had been on my own with the girls that day, I couldn’t take her on it.  The exit for the ride is quite some distance from the entrance so it wasn’t one where I could have gone on twice, leaving one child with the ride attendant each time and swapping over. It was just the kind of ride that Jessica loved. Sophie loved it so much that she went on it twice. 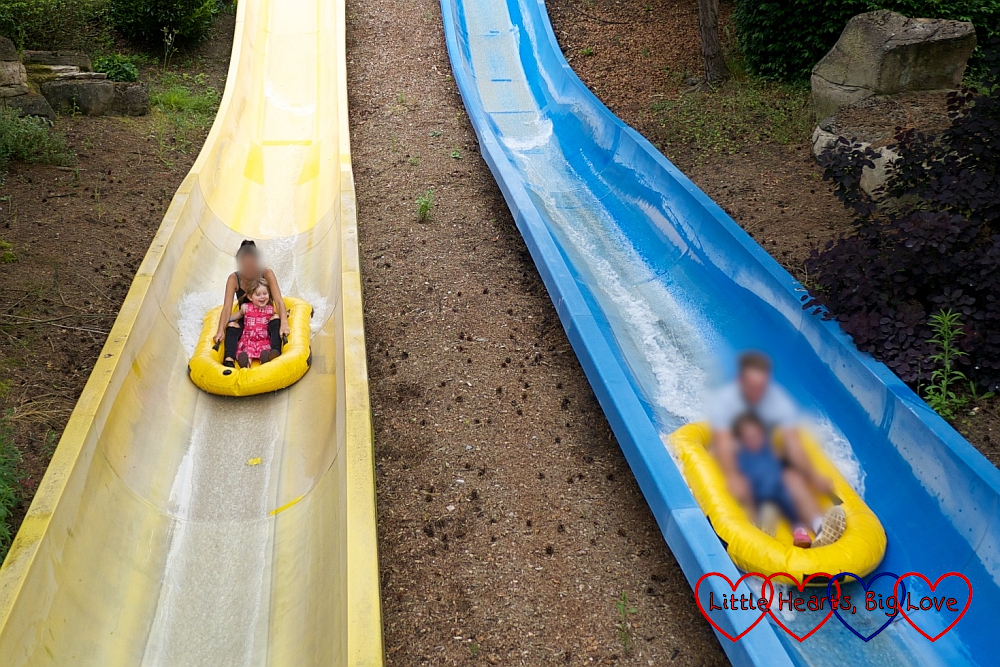 Seeing the Lego Friends show was also another emotional moment for me. This was one of the things we always had to see whenever we went to Legoland, and of course we always had to pose with the Lego Friends girls for a photo afterwards. The Best Friends Forever song was a firm favourite on our playlist at home, and was one of the songs on the playlist at Jessica’s funeral. It was lovely to watch Sophie dancing along and having so much fun, but it did make my heart ache so much for my big girl too. 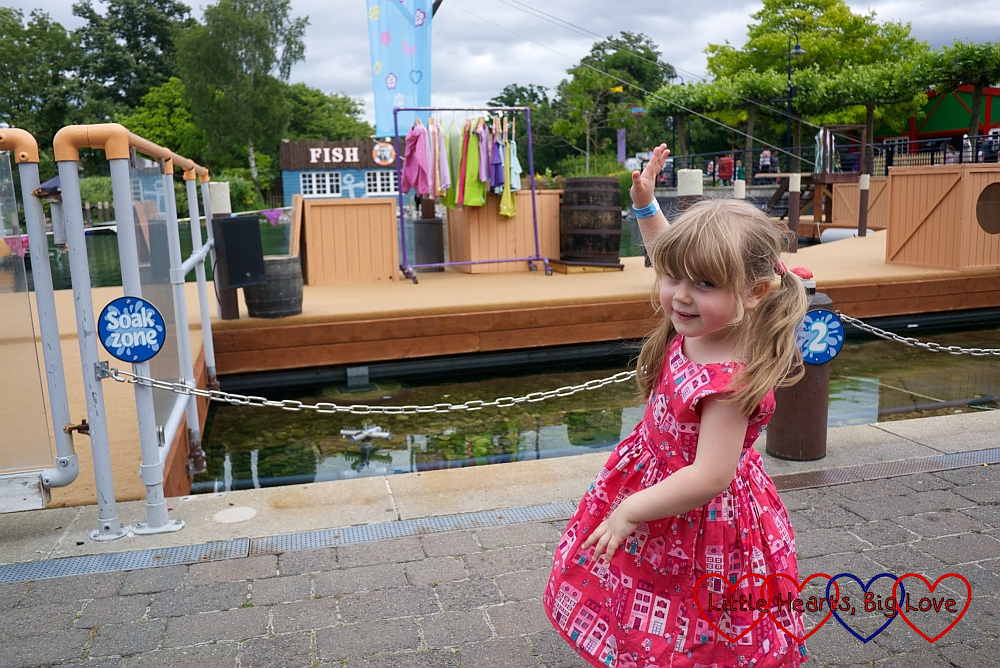 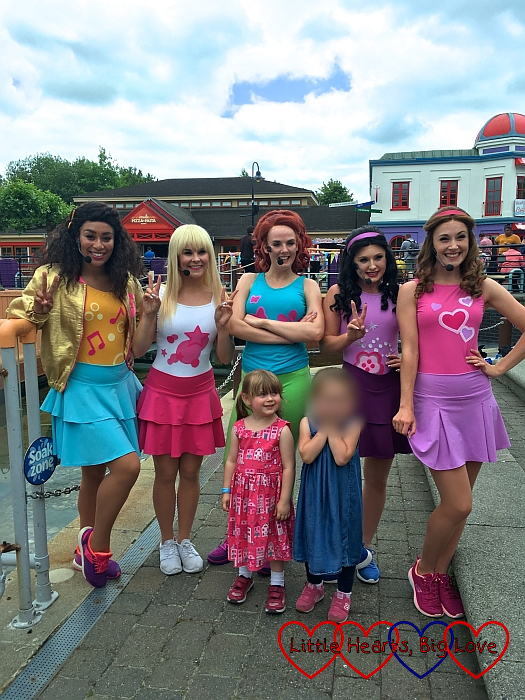 I was very impressed with Sophie’s driving on the L-Drivers cars. Each time she went around, she chose to go through the narrow part of the track and steered her way beautifully through it. Even when the other children were colliding in front of her, she managed to steer around without hitting the kerb once. There was one moment though where she came out of the narrow section and turned the wrong way. It did make me chuckle to see her driving towards all the other cars (whilst managing to avoid them all!) briefly before an attendant came over to turn her around again! 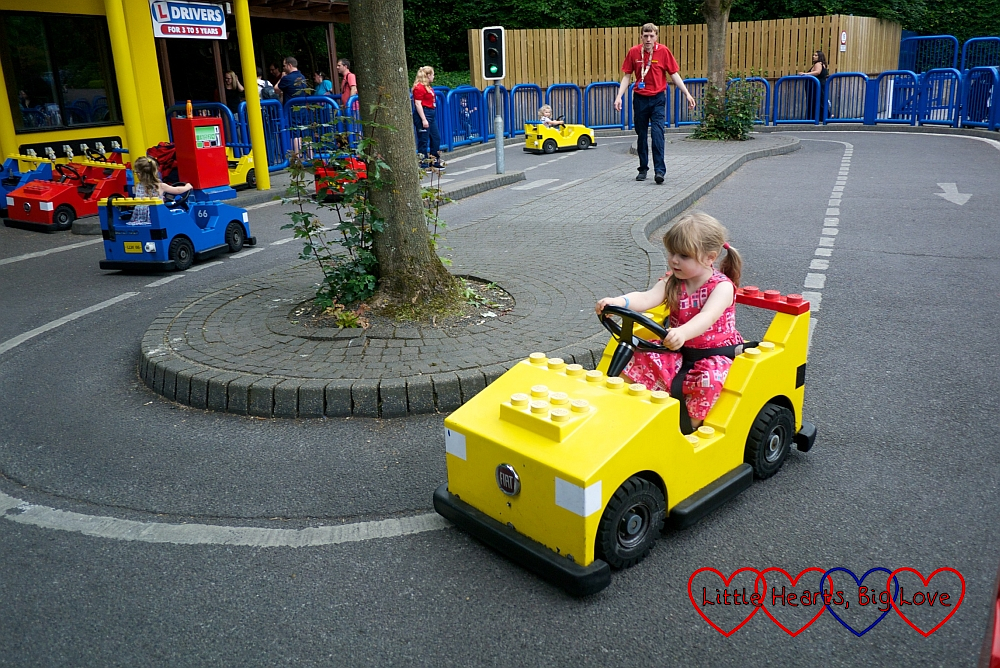 Sophie enjoyed watching the Ninjago show in the afternoon at Miniland. We also loved having a closer look at all the new areas. Sophie loved all the new models that had appeared, recognising many of them, such as St Basil’s Cathedral, Sydney Opera House and the Forbidden City, from episodes of Go-Jetters. I was pleased to see that the Holland area of Miniland with the train running through it was still there though as this had been a favourite area with the girls and I wasn’t sure if it had been replaced by any of the new areas. 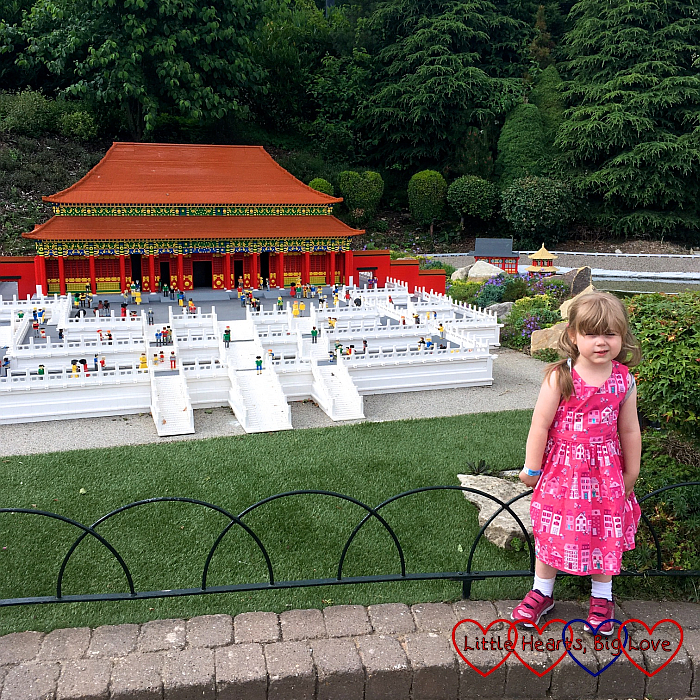 We headed back to Duplo Valley at the end of the afternoon to watch Rapunzel at the Duplo Valley puppet theatre and to enjoy a few more rides on Fairytale Brook and the Duplo Train before the park closed. 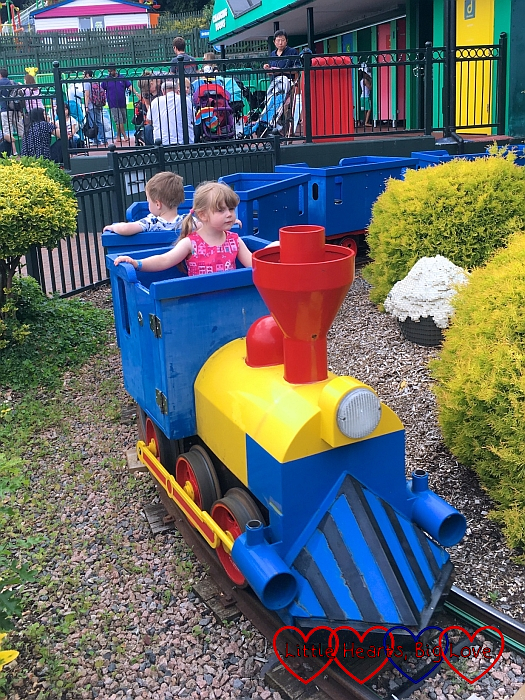 We always used to take the Hill Train back up the hill as it was much easier. It was closed on our last couple of visits due to being refurbished and still hadn’t opened so we had to walk back up instead. I found it quite hard work walking up the hill after spending most of the day on my feet. It was quite a relief to be able to sit down and grab a quick bite in the Hill Top Café before heading home. I was also quite glad to be able to put my feet up when we finally got home as well!

13 thoughts on “Fun with friends at Legoland”