We’ve driven past the Legoland Hotel many times on our trips to Legoland. Having a night’s stay there has always been quite a tempting idea. A stay in the hotel is quite expensive though. Admittedly it includes theme park entry, but we only live half an hour away so really couldn’t justify the cost of staying overnight in the hotel when visiting the theme park. However, the hotel prices are much cheaper out of season when the theme park itself is closed. During the February half-term, there is a themed Junior Builders’ Week with various activities taking place. At £37.50 per person for a night’s stay, this seemed a good opportunity to finally have a stay at the Legoland Hotel. 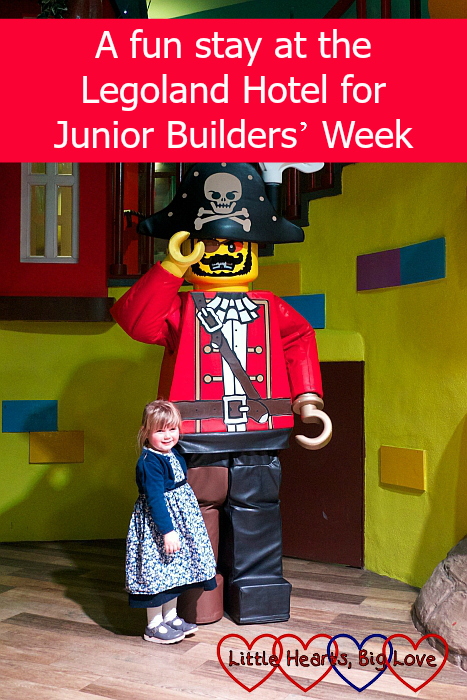 We booked our stay online. There was a choice of different themed rooms. The girls love Lego Friends but these rooms are more expensive than the other themed rooms. We chose a Kingdom themed room instead. The room price includes breakfast in the Bricks restaurant but dinner is not included. We decided to book dinner in the Bricks restaurant which cost £68 for the four of us. Reservations need to be made in advance for dinner and breakfast. It was easy to select our time slot and reserve our table online.

The hotel has a swimming pool and a time slot for this also needs to be booked in advance. We weren’t able to use the pool on our visit as Jessica was still not allowed to go swimming after her heart surgery. 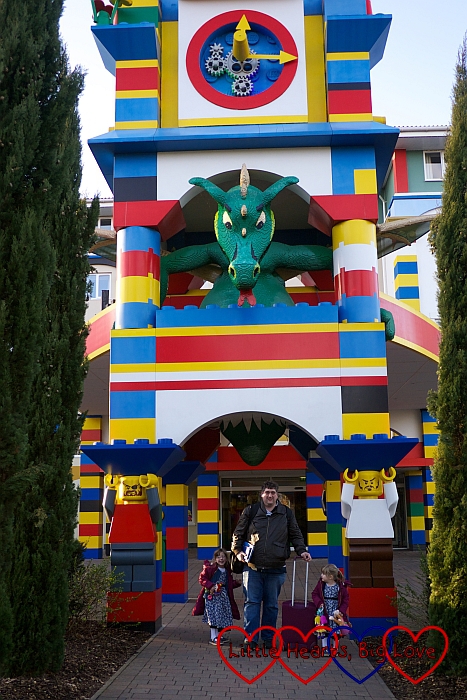 We decided to surprise the girls and not tell them where we were staying. They were so excited when we arrived and the penny dropped. It didn’t matter that the theme park was closed, they were still excited just to be staying at the hotel. They loved walking in under the fire-breathing Lego dragon. The entrance to the hotel didn’t disappoint. There were Lego brick pits and life-size Lego figures to look at plus Lego dragons, airships and aeroplanes flying above their heads. 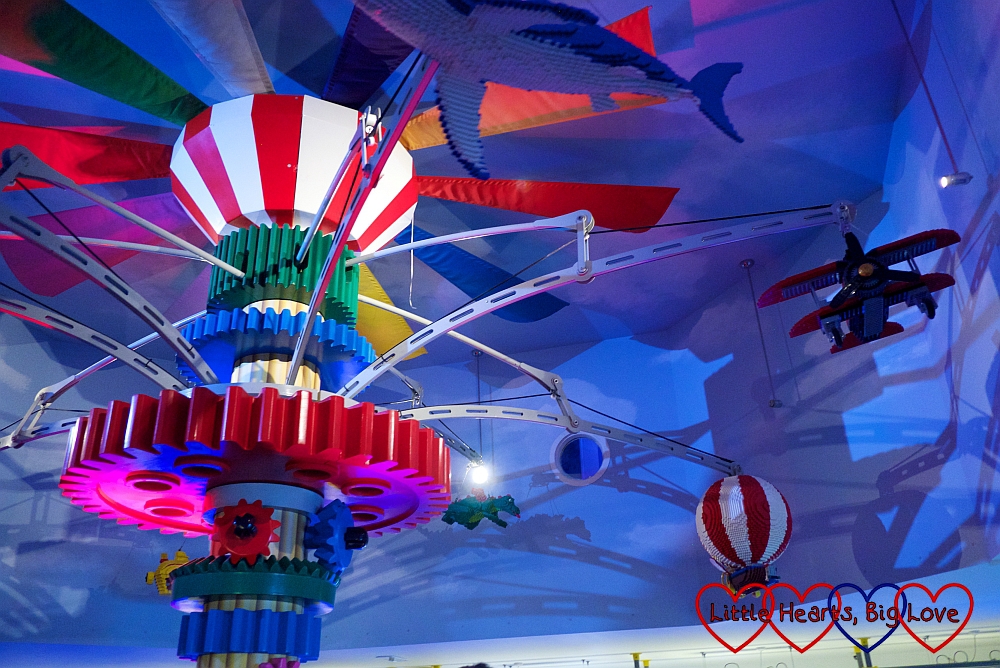 We were able to check in to the hotel from 3pm. We were given wristbands which we needed to wear to access the activities in the hotel. The girls also received a bag each containing two Lego sets, a Lego Minifigure blind bag, a pop badge and a Junior Builders’ week checklist. 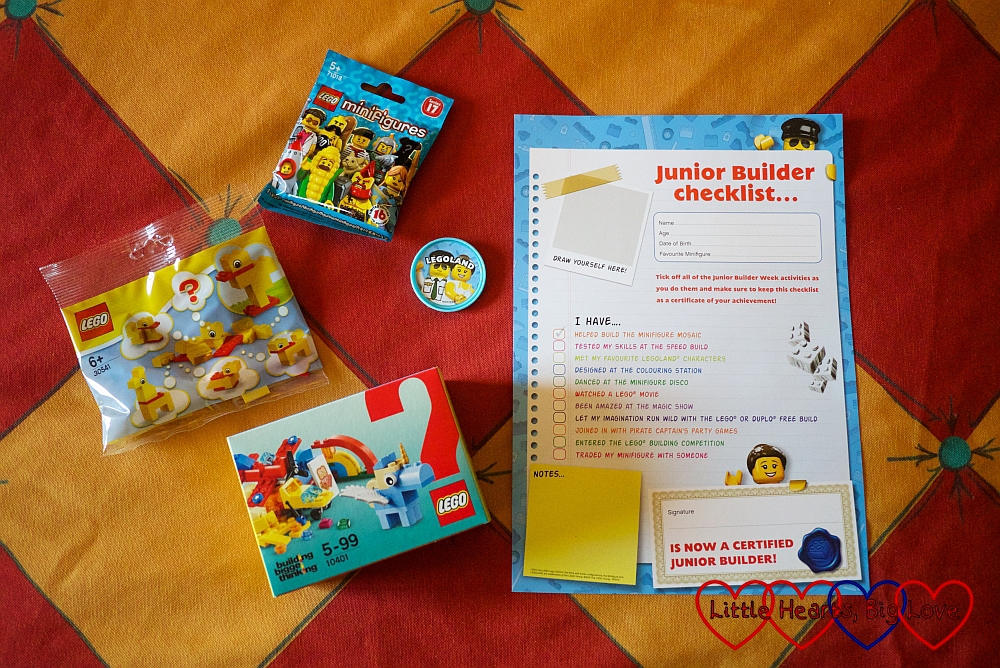 Our room had separate sleeping areas for the adults and children. Our sleeping area had a double bed with a banner above it and a Lego shield on the wall, plus a desk and a TV. The girls’ sleeping area had bunk beds with shield carvings and they had their own TV. There was a locked chest in the corner with a sheet of clues to solve the combination for the lock. Inside the chest was another Lego set each for the girls. 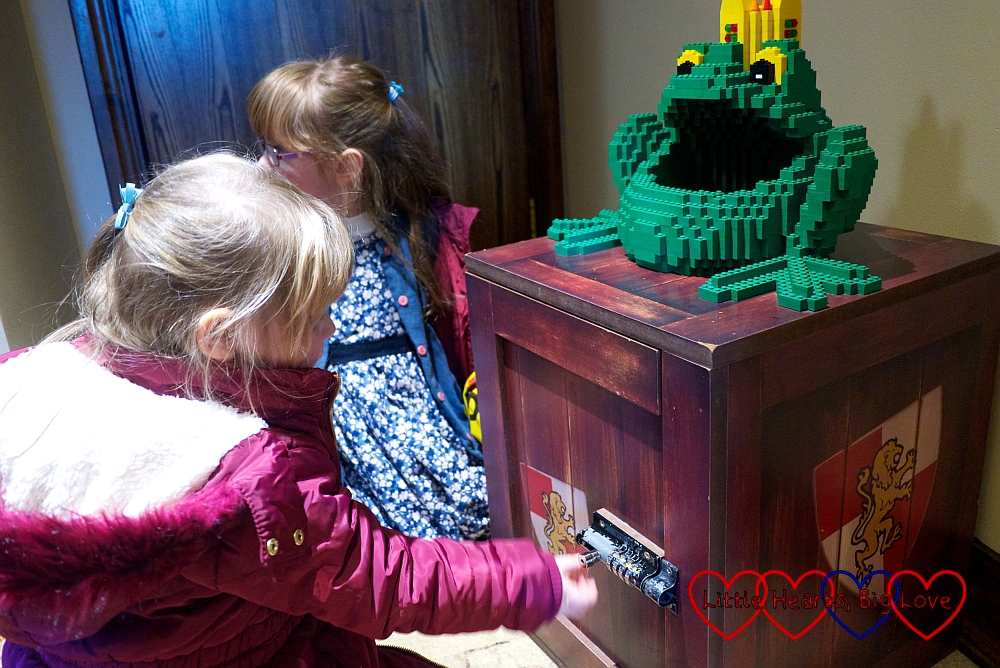 I loved the little touches in the room – the themed wallpaper and carpet, the small Lego figures of frogs, dragonflies and other creatures around the room and the Lego-themed toiletries in the bathroom (including Lego brick shaped soap). The toilet also had an inbuilt child seat. 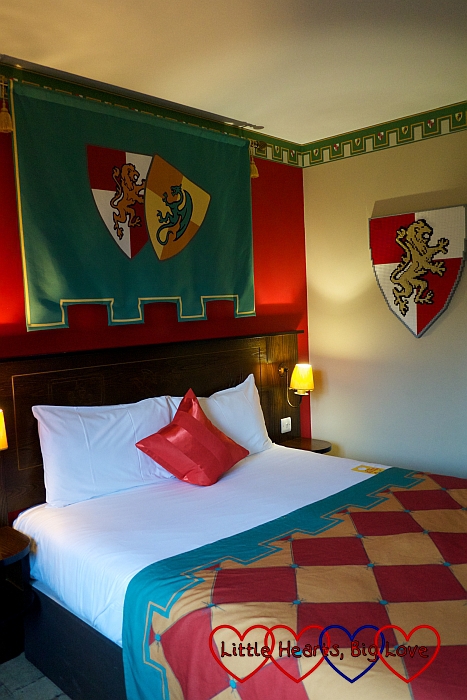 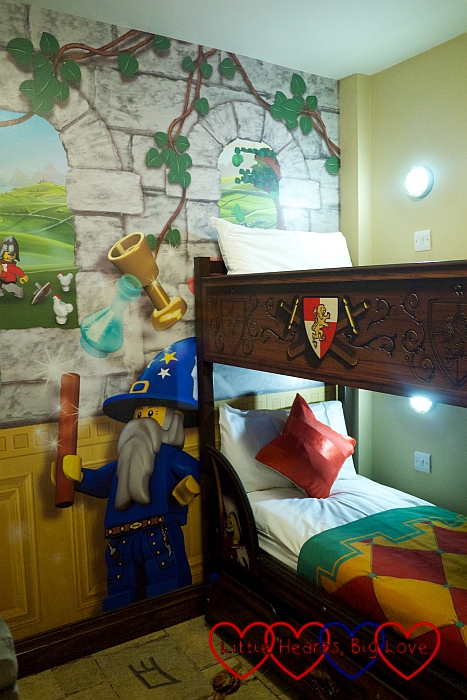 The girls were soon engrossed in putting together their Lego sets. I suspect they would have happily spent half the evening in our room just playing with these had we not had to tear them away from it to go and have dinner!

Eating at the Bricks restaurant

The Bricks restaurant is a self-service buffet restaurant. The children’s options were in the centre of the food area at a perfect height for the girls. There were plenty of different food options available, including Lego brick-shaped chips. The Lego chips did look cool, but none of us were really that keen on them although the rest of the food we had was delicious. The only downside was having a bit of a wait for the ice-cream machine as it needed refilling just at the point when the girls were ready for dessert. Thankfully there were plenty of other options available. There were also free refills of soft drinks and hot drinks. Other drinks were also available from the bar for an extra charge. 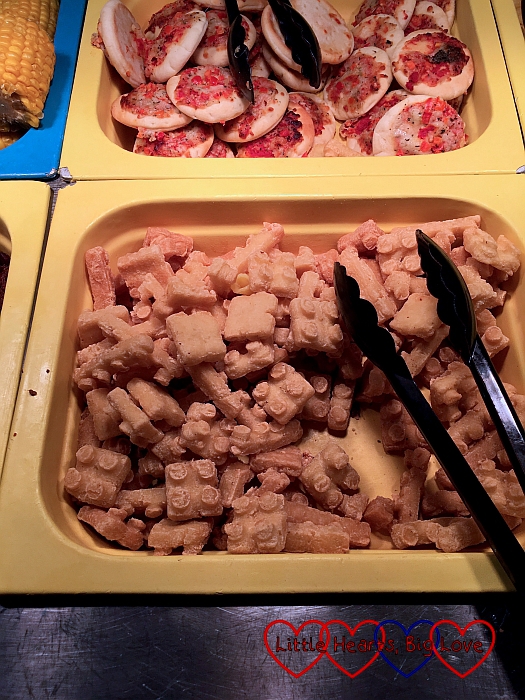 The girls were given a Minifigure colouring sheet each and encouraged to colour in the paper tablecloth which they quite enjoyed. It helped keep them occupied while they waited for the ice-cream machine to be ready again! 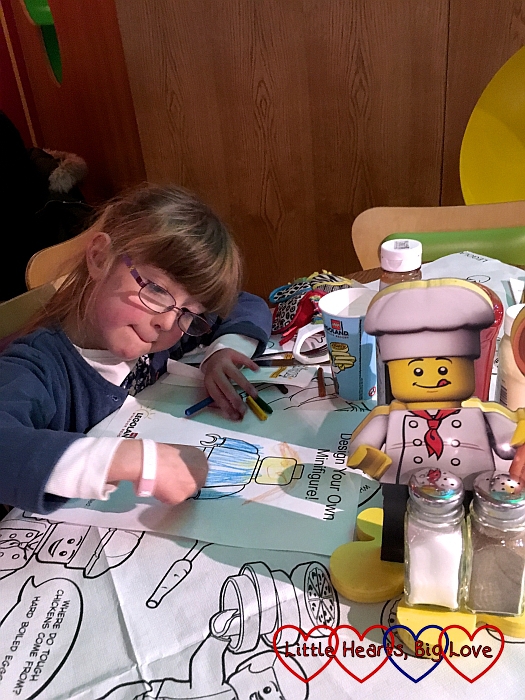 Breakfast the next morning was a similar set-up. There was plenty of choice with cooked breakfast options, cold meats and cheese, cereals, porridge, pastries and smoothies available. As with the previous evening, the children’s options were in the centre. The girls enjoyed being able to easily choose what they wanted.

The evening’s activities on the Atrium stage started with being able to meet some of the Minifigure characters and pose for photos. This was followed by the Pirate Captain’s party games which the girls joined in with after we’d finished our dinner. Next up was a magic show followed by a disco. The girls quite enjoyed the evening’s activities although they found the magic show a little too long and were quite tired by the time the disco started. 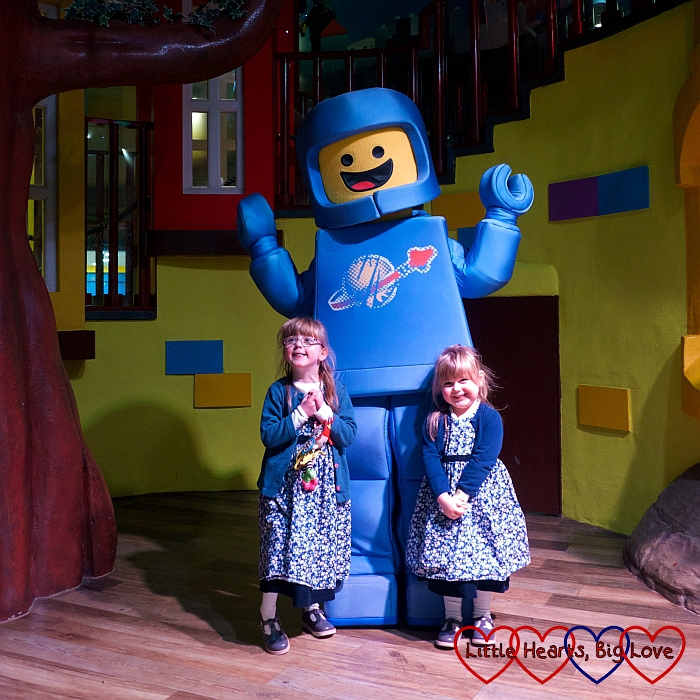 There was also some brick pits around the Atrium stage area and a PlayStation games area. The PlayStation area was a big hit with the girls as they love playing the Lego Dimensions game at home. 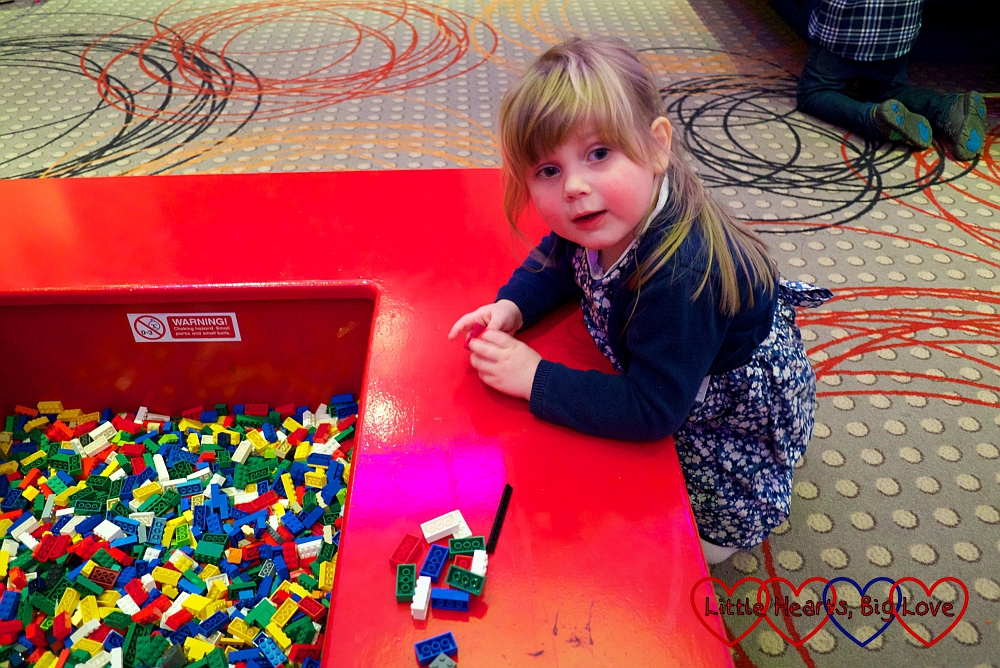 The Lego Lounge area in the hotel was also open throughout the evening. There was another PlayStation games area here plus a Movie Den and Brick Pit areas. Jessica and Sophie were quite taken with the Lego man sitting in the Lego Lounge reading his newspaper. 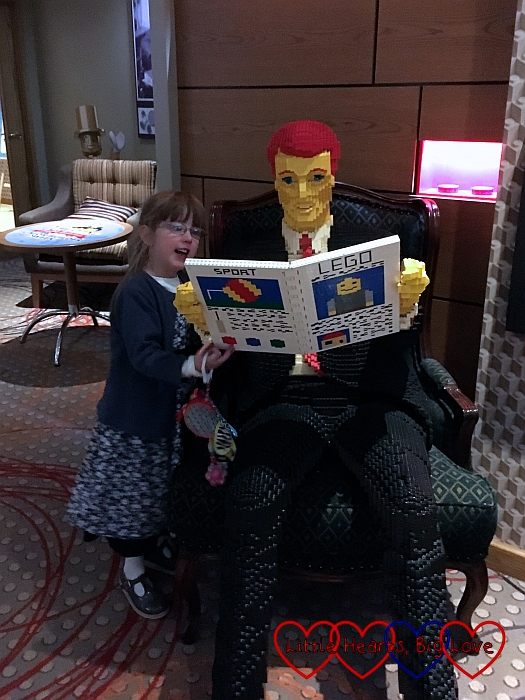 We had to check out of room by 10am but could stay in hotel until 2pm to carry on with the Junior Brick Builders’ activities which were taking place. These activities included speed building, helping to build a giant Minifigure mosaic, free building in the Brick Pits and Minifigure colouring. 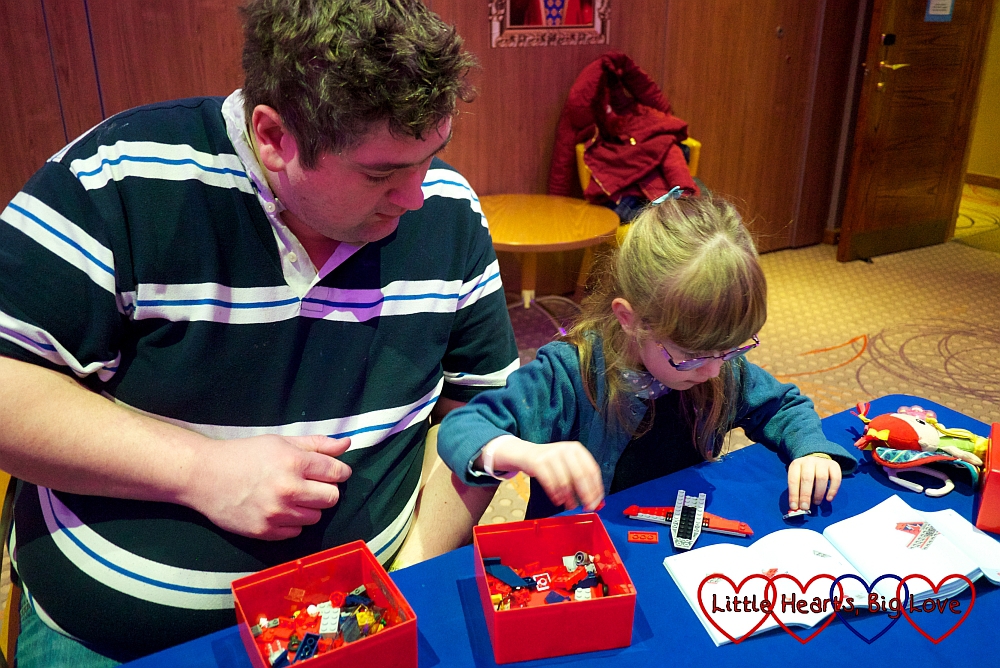 The mosaic building sessions were very busy at first so we started with the speed building. We were given 15 minutes to put together a Lego plane. The session is aimed at over 5s but Sophie coped quite well with trying to build the Lego plane with a little help here and there. 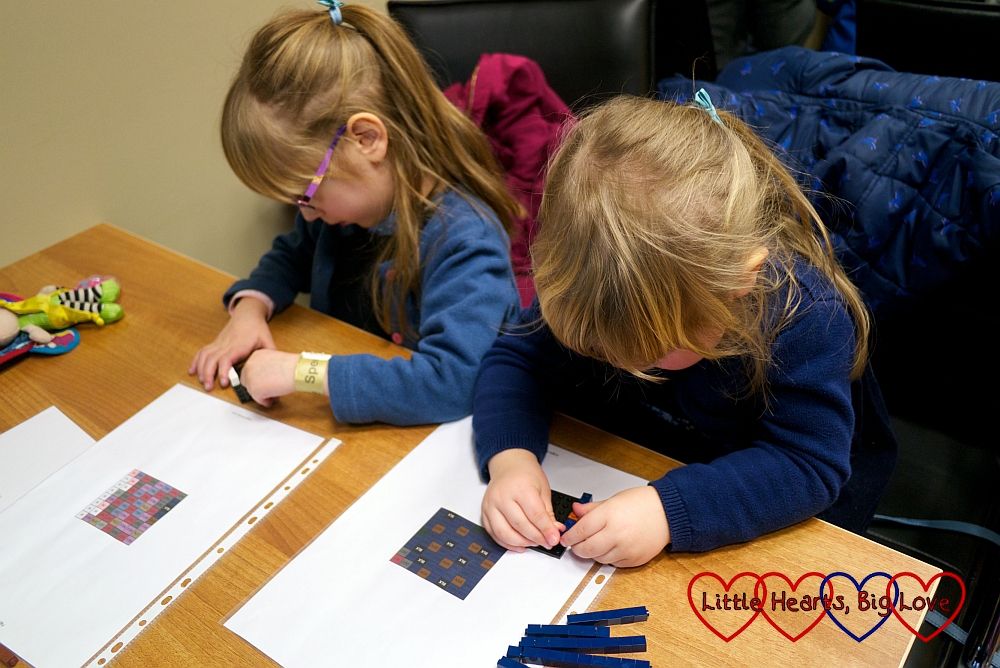 We’ve done some mosaic tiles before although not for a while. I was quite impressed at how much better both girls are at doing this now. They both managed to follow the guide and build their tiles with very little help from us. Once we’d finished our tiles, they were added to the board outside to start forming the giant Minifigure picture. We’d booked our stay at the start of Junior Builders’ Week so we just got to see the start of the giant mosaic. 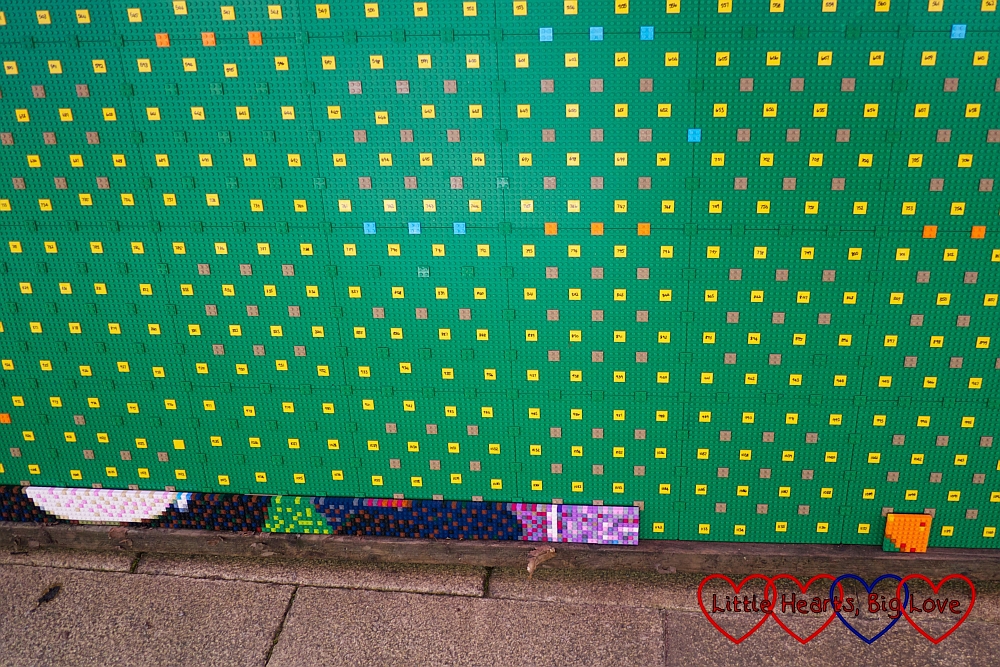 The girls loved our stay at the Legoland Hotel so much that they wanted to know when we could go again. As much as hubby and I enjoyed it, we still feel we couldn’t justify the cost of staying there during the main theme park season. We would certainly consider going back again for Junior Builders’ Week next February half-term though. Hopefully next time we will also be able to try out the swimming pool! 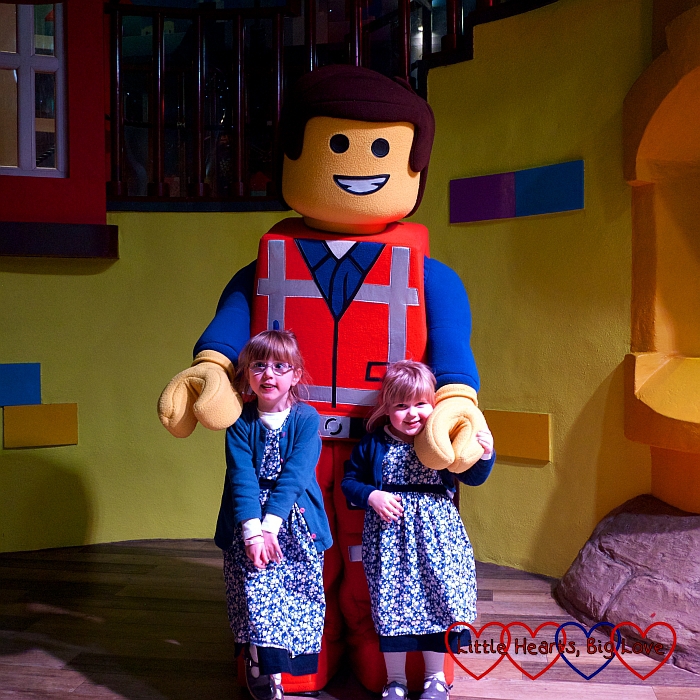 We paid for a stay at the Legoland Hotel for Junior Builders’ Week and I have chosen to share our thoughts on our stay. I have not been compensated in any way by Legoland for writing this review. All thoughts and opinions are my own.