“If I was seeing this in a newborn baby, I would be advising against surgery as it is so unlikely to be successful.”

I was 22 weeks pregnant with my first baby. Two weeks’ earlier, at the 20 week scan, my world had fallen apart. Our baby girl had a serious and complex heart defect. Now we were meeting the consultant from the surgical team in London for another scan to discuss our available options. Our baby girl needed to have surgery after birth in order to have any chance of survival. Now we received the devastating news that her heart defect was so severe that she was extremely unlikely to be a suitable candidate for surgery. Instead, we would be offered compassionate care – making her comfortable until she passed away. She would probably only live for a few hours.

The consultant was still talking, telling us about the kind of care we would expect to receive after our baby was born, but I was barely taking it in. Then he added something else:

“I should probably mention that there is a children’s hospital in Boston that performs in-utero surgery for these kinds of conditions. It’s quite on the edge and radical though. I really don’t think it would be suitable in this case, but I felt I should mention it just for completeness.”

The consultant’s tone was dismissive.  We shook our heads, and didn’t ask any more.

“I’m sorry I couldn’t give you better news,” he said, and with that, we were shown out into the corridor.

We stood there staring at each other for a moment. Neither of us wanted to break down in the corridor. We needed somewhere safe, somewhere private, somewhere we could be alone. My first thought was the hospital chapel. Somehow we managed to hold back the tears until we reached it. Then we broke down, overwhelmed by our grief and the thought that as soon as we got to say hello to our baby, our little Jessica, we would start the process of saying goodbye. In that moment of complete and utter brokenness, I clung to one thought. The only thing that I felt could give me any strength to endure the path ahead – the feeling that God was so much bigger than all of this; that somehow we would endure. We prayed desperately for a miracle. 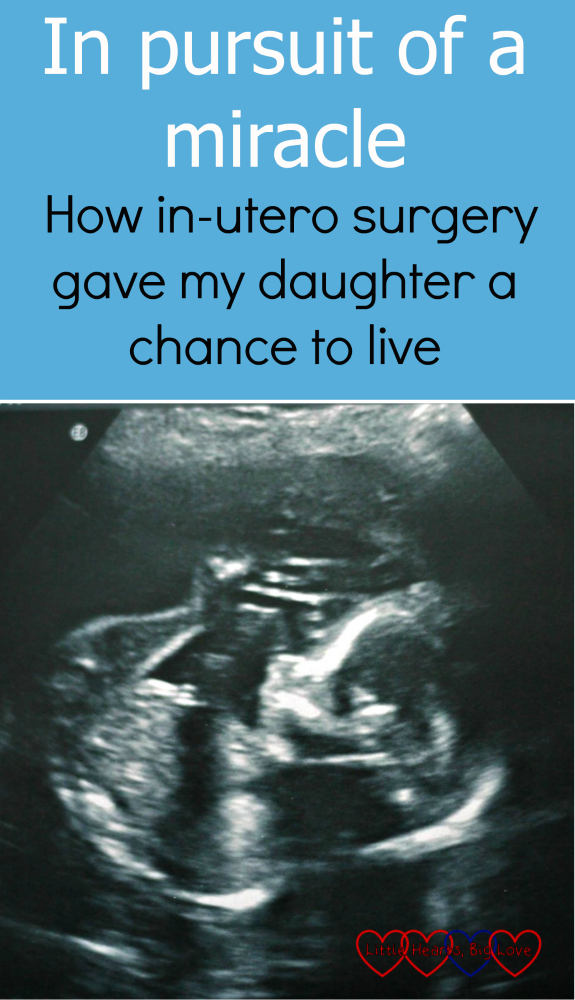 A glimmer of hope?

Over the next few days, I found myself coming back to the consultant’s words about the children’s hospital in Boston. At first, I dismissed it. The consultant had seemed so sure it would be the wrong thing for us. It would be incredibly expensive – how would we ever afford it? Then I remembered my prayer in the waiting room before the appointment. I had prayed that we would leave with some hope. Was this the glimmer of hope I had prayed for?

Michael and I discussed it. We felt that we needed to at least explore the idea and make contact with Boston Children’s Hospital. We felt strongly that we needed a very clear sign to follow this path if it was the right one.  It would be incredibly expensive, but we trusted that if it was God’s will for us to go to Boston, then somehow the money would be provided. We asked God to make it clear whether this was His will for Jessica and that if it was His will then the surgery would be successful. For the first time since the 22 week appointment, I started to feel that there was hope for our daughter.

We contacted one of our consultants in Oxford to discuss a referral to Boston. She listened sympathetically, but expressed doubts over it being a suitable option. However, she agreed to discuss it with the team before our next appointment which was just a few days away.

At first it seemed the news at that next appointment was even worse. The severity of Jessica’s heart condition meant that there was a significant chance her heart would fail during my pregnancy. Our consultants reminded us of all the things we needed to seriously consider. Not just the financial cost, but the risks of the surgery, the uncertainty of how long we would need to stay, finding accommodation, the lack of social support. Still, I felt that if this was really the right choice, then somehow all these things would fall into place. I reiterated that if going to Boston could help Jessica, we wanted to pursue it.

There was a moment of hesitation. Then one of our consultants told us that he had discussed our situation with a colleague, Dr Wilson. Dr Wilson was currently on sabbatical in the States but had been back in Oxford for the previous weekend.  He had some experience of performing fetal surgery, although not the particular procedure we were exploring, and was due to return to Oxford briefly in a few weeks’ time. I would be 28 weeks’ pregnant when he returned – the ideal time for the fetal surgery. Dr Wilson was willing to attempt the procedure, if we were willing to accept the risks. It might not be successful, or Jessica might not survive it. Even if it was successful it could cause premature labour and Jessica might be born before post-birth surgery would be possible. It was risky, but it felt like the answer to our prayers. 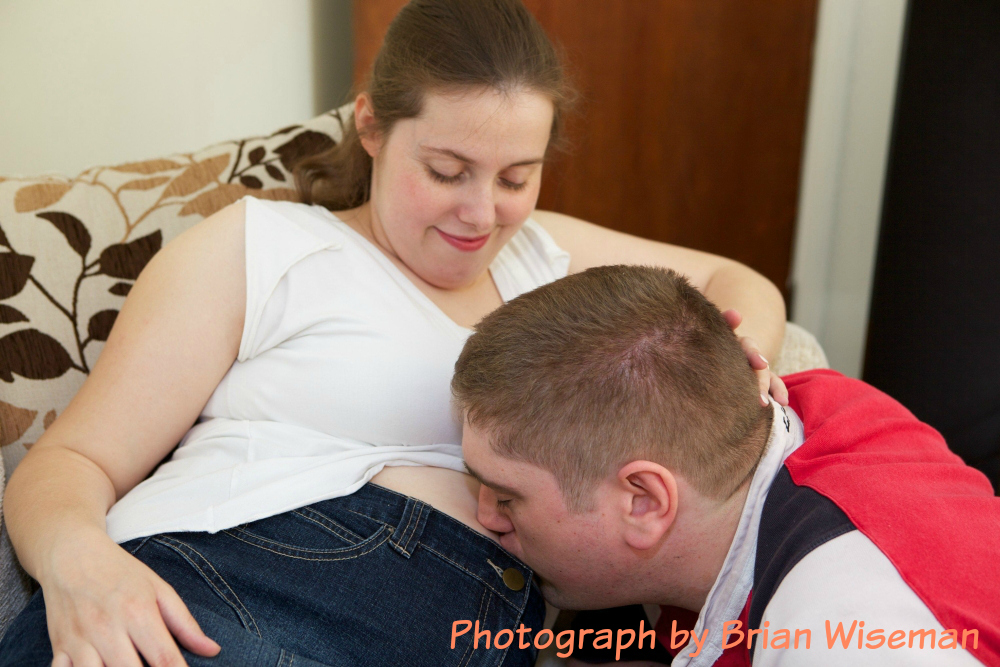 A few weeks later, we went to Oxford for the surgery. The procedure involved inserting a needle through my bump into Jessica’s umbilical vein. She would be given anaesthetic to sedate her though this needle. Dr Wilson would pass a wire through the needle and use ultrasound to guide it through the vein and into Jessica’s heart. Once inside the heart, a balloon would be passed along the needle and inserted into the hole between the top two chambers (the atria). The balloon would then be inflated to enlarge this hole and improve the blood flow into the left side of Jessica’s heart. I would have a local anaesthetic and would be awake throughout. This was a huge relief. I had been haunted by the thought of being given a general anaesthetic and then woken up with bad news.

The risk of Jessica not surviving the procedure was “higher than ten percent and lower than fifty”. It sounded scarily high. We had no choice. It was Jessica’s only chance of survival. We took a deep breath and signed the consent form.

The consultant took us into a very large scan room where everyone was prepped and ready for the procedure. There were seven consultants in all – each with a very specific role in assisting the surgery. Jessica was in an awkward position though. The atmosphere in the room was tense. It took several attempts to get the needle into the umbilical vein. Jessica kept trying to kick it out. Eventually the needle went in and Jessica was sedated. The movements stilled. I prayed that I would feel those beautiful movements again.

Getting the wire to pass through the needle proved to be very tricky. For almost two hours, the team tried unsuccessfully to pass the wire through. I stayed as still as I could, silently praying that Jessica would make it through. Michael kept squeezing my hand. Out of the corner of my eye, I could just about see the monitor. I kept my focus on that tiny little heart that continued to beat. After two hours, the team decided to call a halt to the procedure and try again the next day.

Jessica was fine but she would have to go through it again. As the anaesthetic wore off and she started to wake, I felt her hiccup. It was the most beautiful feeling in the world. The thought of having to go through it all again was frightening, but I knew that I had to. I had to give her that chance.

The next evening, the team tried again. At first, it seemed much the same as before. Jessica was in the same position, making the procedure more difficult.  Dr Wilson tried again and again to pass the wire through the needle and guide it into the heart. Each attempt proving unsuccessful. The moments ticked by. Once again I found myself praying as I stared at the tiny heart on the screen. Please let it work… please let her survive it…

“We’re just going to have go straight into the heart,” Dr Wilson said eventually. His tone implied it was ‘kill or cure’ time. I closed my eyes and prayed hard. The needle went in. This time he managed to guide it into the right place. He inserted the balloon and inflated it. I could hear Jessica’s heart rate increasing. Another inflation. And then the wire was out again, and it was all over. I could hear the sound of Jessica’s heart beat on the monitor, slowing down to normal levels and settling again. A wave of thankfulness washed over me. It was over and Jessica was still alive!

Later that evening, I felt the sensation of her hiccupping and moving again. I wanted to sing for joy as I thanked God again and again. This was the miracle we had so desperately prayed for. Our baby girl had a chance to survive. We had taken the first step on the journey. There would be many more to come, but we had hope.

We (and our wonderful cardiac team) went out on a limb. Today, I see the sweetest fruit of that moment of stepping out in faith. My beautiful girl, full of joy, laughter and smiles. So many memories created; so many wonderful happy moments to treasure and enjoy. We thank God every day for the precious gift of being able to watch Jessica grow and thrive.  For now she is healthy and doing well.

The road ahead is still a challenging one. There will be more heart surgery in the future. Our little girl’s life will once again be in the hands of the surgical team. We will put our trust in God and pray for Jessica to survive. Each time, it is a little harder than before but we hold fast to hope. Focusing on enjoying the moments we have now and hoping and praying with all our might that we will have many, many more of them. 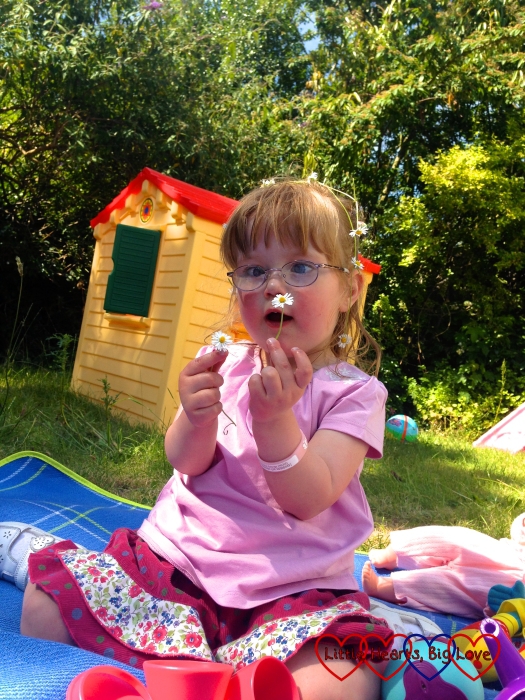 Written in response to the prompt:

“Why not go out on a limb? That’s where the fruit is.” Mark Twain

62 thoughts on “In pursuit of a miracle: how in-utero surgery gave my child a chance to live”