Last week, my husband and I are were kindly invited by Action Medical Research to attend their Dine with Davina event in Southampton and share Jessica’s story. It was lovely to get dressed up and have a day out together, enjoying a delicious three-course meal, and to be able to talk about Jessica is always a joy. 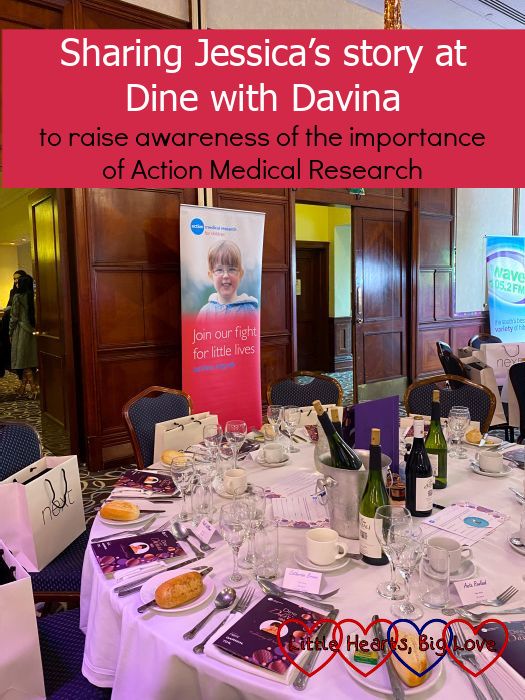 Dine with Davina – the event

Dine with Davina is an annual ladies’ lunch fundraiser, hosted by Davina McCall. We were greeted by the Action Medical Team on arrival and escorted to the VIP drinks reception, where we enjoyed a glass of prosecco before having our photo taken with Davina. We browsed the stalls which had some great items for Christmas gifts and picked up some Christmas cards. It was lovely to see Jessica’s little face looking down at us from one of the banners around the room. It’s such a beautiful photo of her. 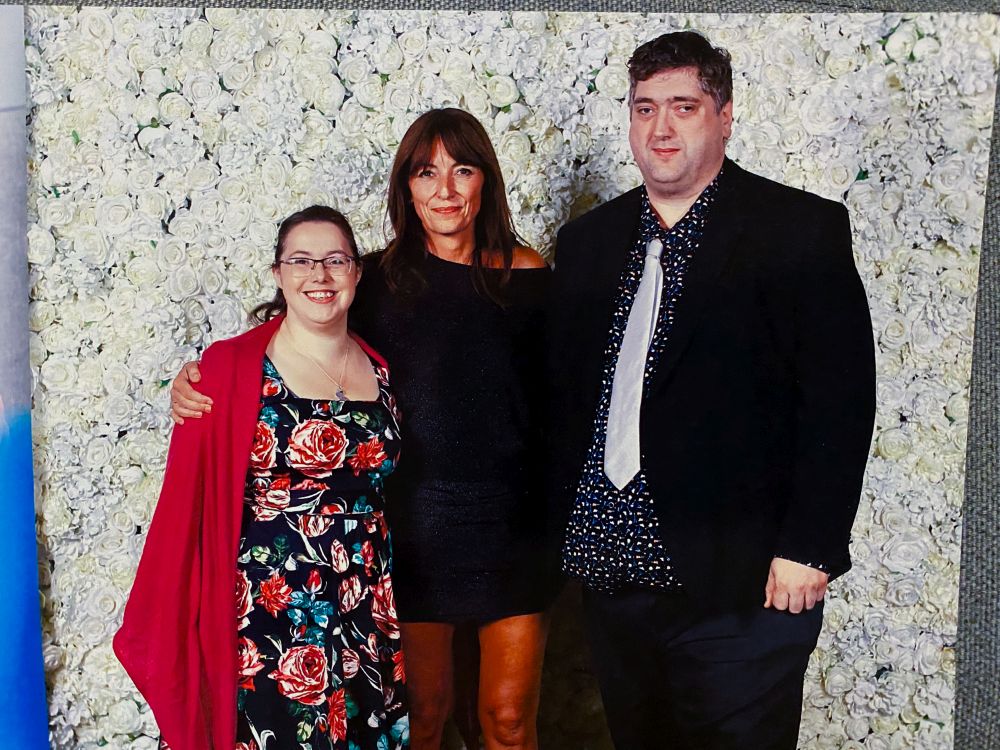 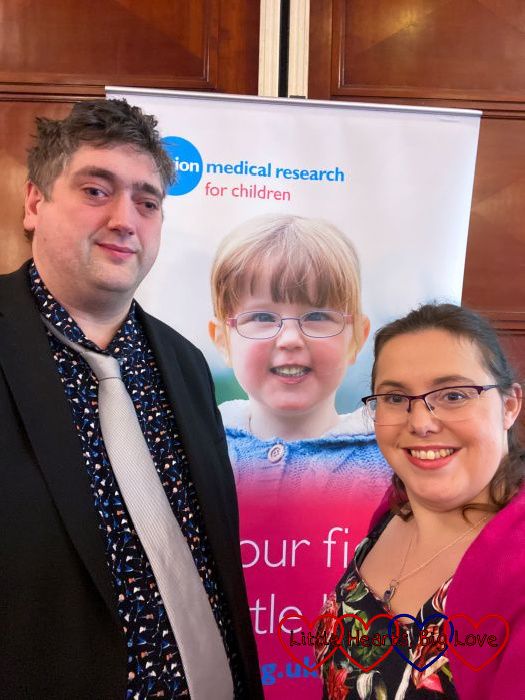 We were sitting at the top table with Davina McCall, her boyfriend Michael Douglas, her mum Gaby and aunt Becca, Paula, the Action Medical Research Fundraising Manager, singer Jordan Williams and radio presenter, Mark Collins, who were all lovely and friendly. After the starter, Davina shared some updates from her life over the last couple of years. Jordan then took to the stage to interview some of the team from Raring to Row, who are planning to row the Atlantic in 2022 to raise money for Action Medical Research. 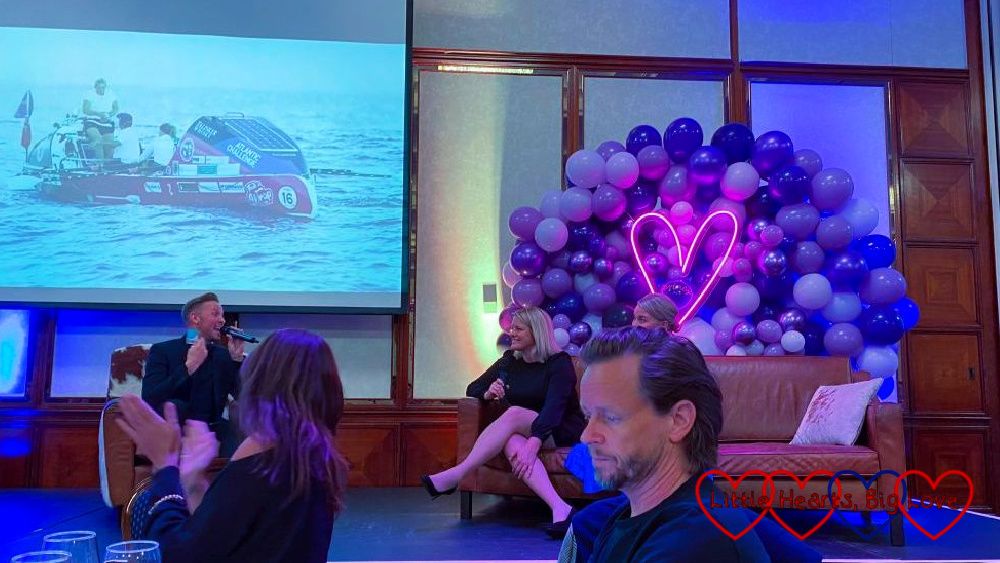 Their journey will take them from La Gomera in the Canary Islands to Antigua, rowing 3000 miles unsupported across the Atlantic Ocean. At the moment there are three team members (and they’re seeking a fourth person to join the team), Kevin, Helen and Gemma (who will become the first woman to row the Atlantic twice). This will take them around 50 days, during which they’ll have two hours on and two hours off to rest throughout. At the midway point, the nearest human being to them will be on the International Space Station. It looks like an incredible thing to do – quite frankly, just watching the video giving a glimpse into what they’re about to do made me feel a little seasick! If you’d like to follow their journey, you can find them on Instagram here. 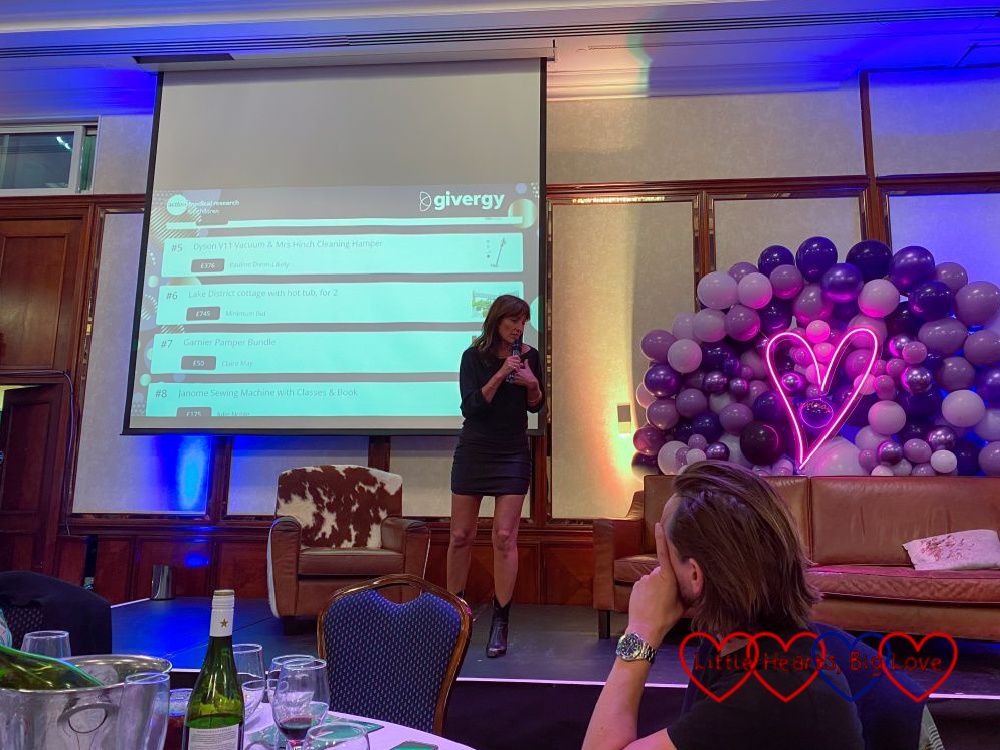 After dessert and another update from Davina, it was my turn to take to the stage for a chat with Jordan. I’d re-watched Jessica’s video the evening before to prepare myself but it was still emotional seeing her on the screen – all those beautiful photos and video clips of her. I was a little nervous, but Jordan was very good at putting me at ease and it is always a joy to be able to talk about Jessica. I spoke about the joy she gave to people during her life, about my blog and why it is important to me to share Jessica’s story and our story. 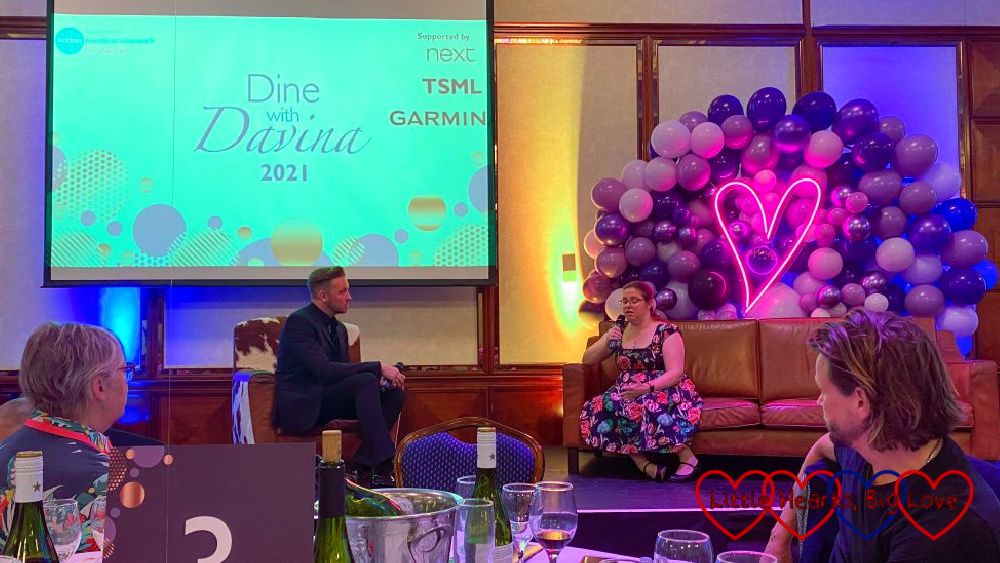 The lunch finished off with a fundraising auction hosted by John Cameron (there was also a silent auction which had been running throughout the day). The items in the auction included a dress and shoes originally worn by Davina, a haircut and style Michael Douglas’s salon and an opportunity to join in a training day with the Raring to Row team. I then drew the winning tickets for the two raffles for a diamond necklace and a signed Paddington Bear and then Jordan took to the stage again to sing for the start of the evening entertainment. We stayed for a short while and had a little dance before heading back home to Sophie and Thomas, who were being looked after by Grandma. 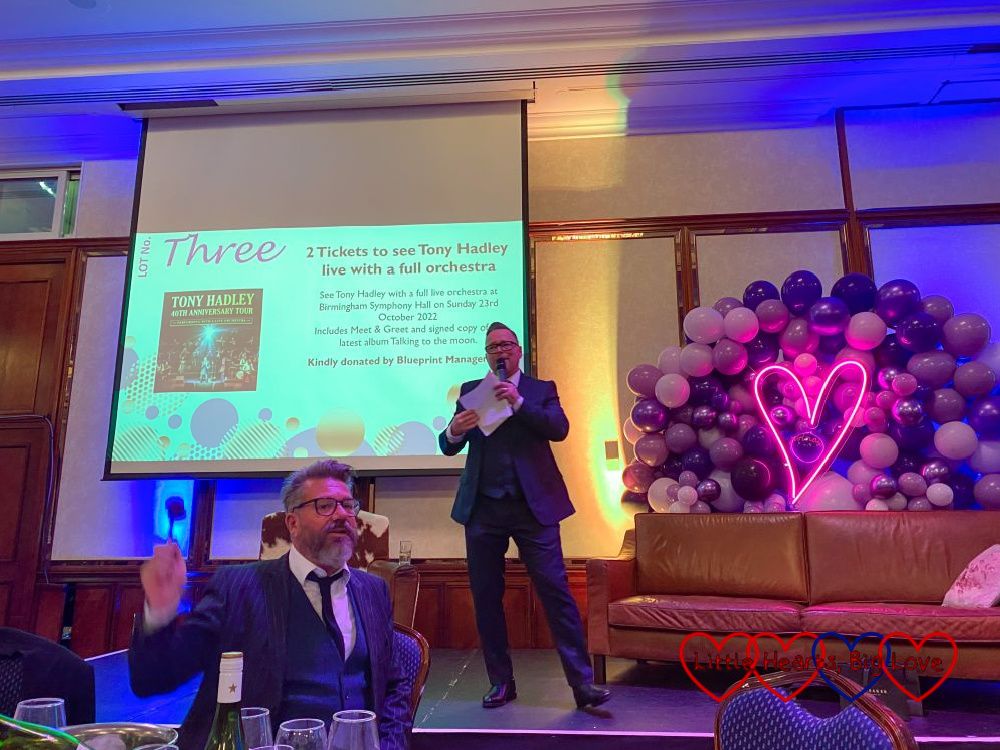 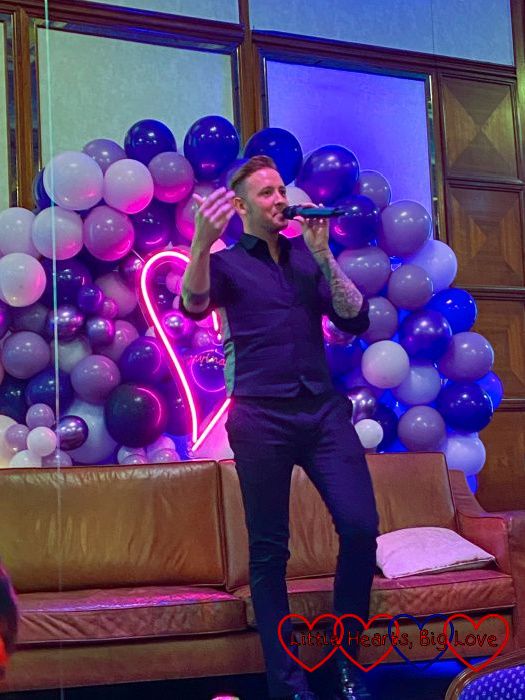 Why supporting Action Medical Research is important to us

We’ve been involved with Action Medical Research for several years now, originally working with them to raise awareness of a research project that focused on developed 3D computer models of babies’ hearts to help improve surgical outcomes.

Without all the research that had been done in the years before Jessica was born, we wouldn’t have had those six and half wonderful years that we had with her. A few decades ago, children born with the type of heart defect that Jessica had would had died shortly after birth, and sadly there are many babies that don’t survive, even with all the advances in surgery for congenital heart defects. We were told when I was 22 weeks’ pregnant that Jessica’s prognosis was very poor, that she was unlikely to survive the surgery she needed after she was born. We were offered hope, thanks to some a pioneering heart surgery carried out while Jessica was still in the womb. 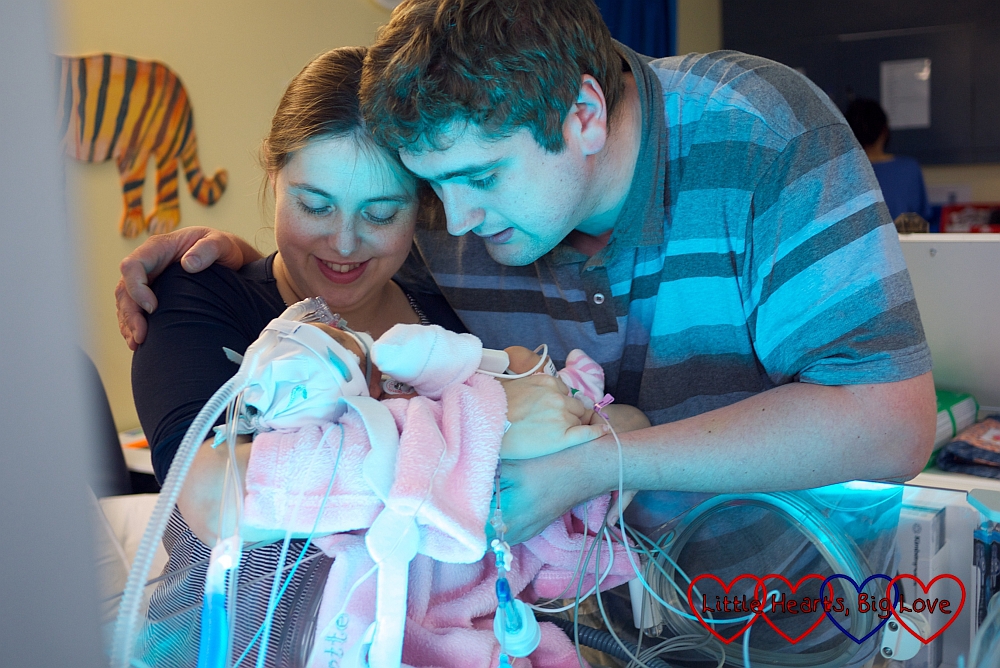 It means a lot for us to be able to still share Jessica’s story in order to help other families. One of the many things that is hard about being a bereaved heart family is that our story often represents the reality that many heart parents would rather not think about. That instead of being able to give hope to others, our story reminds them of the fear that they live with. Child loss is something that no parent should ever have to face. But for far too many parents, it is the reality that they live with. As bereaved parents, our voices are still important. Although our stories may not give hope, they are still able to help others.

Although it was Jessica’s story I was sharing, I also had another family very much in my thoughts. Friends of ours from our am-dram days in Southampton whose 16-year old son sadly died from cancer later that day. It breaks my heart that another family now has to endure the pain of having to live without their child. Last month was Childhood Cancer Awareness Month and one of the things I learned from my friends spreading awareness of this was how few drugs there are for treating childhood cancer, most of which were originally approved for adult use only. The newest of these is 30 years old. This is why medical research for children is so very important. Through better research, more children will have the chance to survive into adulthood and to be able to live full lives.

Being able to see our children grow and thrive is such a huge blessing. Having to live life without your child is something that no parent should ever have to face. Increased research leads to improvements in treatments which means fewer families who are forever incomplete, fewer families grieving the loss of a much-loved and wonderful child. And this is why the work of Action Medical Research is so important to me and why I will continue to share our story and help support their work by doing so.

Thank you Action Medical Research for a lovely afternoon and for the opportunity to share Jessica’s story. 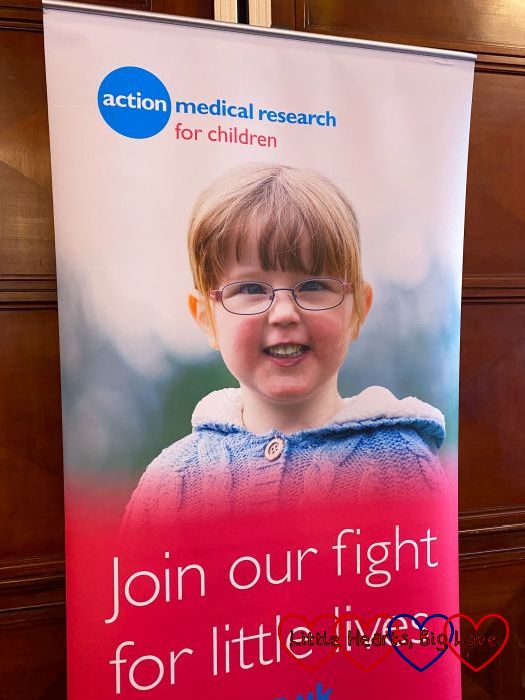 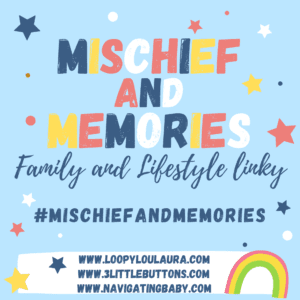