I suspect it might have been another routine appointment for you. For us, it was a day when our world fell apart. A day when we received news that no parent ever wants to hear. It is doubtful that you would even remember us amongst all the families you must see on a daily basis. I know I will always remember you though, and the way in which you told us that there was almost no hope that our daughter would be suitable for the heart surgery she would need in order to survive.

I remember being shown into the scan room, lying on the bed and the silence in the room as the sonographer scanned me. There were no reassuring words, no comments about what was being seen on the screen. You wandered over from your desk a couple of times to look at the screen, muttering inaudibly to your colleague before returning to your desk. I knew it would be explained afterwards. We’d been warned at a previous scan that the doctors would talk amongst themselves during the scan and explain their findings afterwards.

I assume you had decided we were familiar with this process as other than being asked to get up on the bed and expose my bump so the scan could take place, nothing had been said to me or my husband. From the moment the scan started, I think I had ceased to be a person. I was just a bump. At least that’s how I felt at the time. 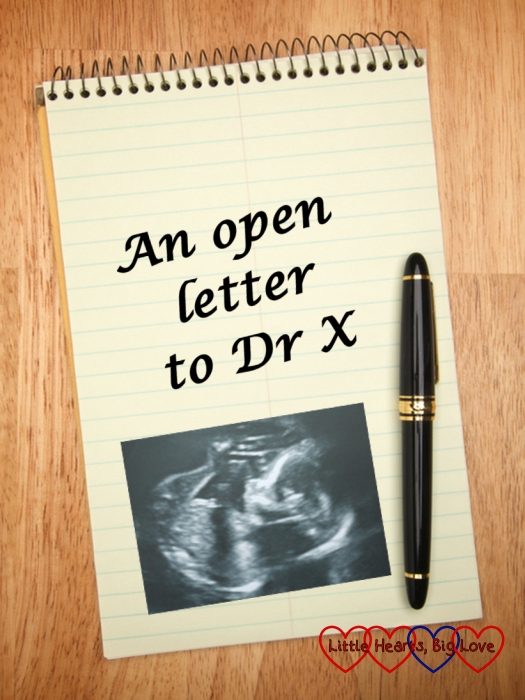 The scan over, you calmly explained that our daughter’s heart defect was so severe at this stage that she was highly unlikely to be a candidate for surgery after she was born. You told us that if you were seeing her anatomy in a newborn you would be advising against surgery. Your next words shocked me to the core:

“I assume you’re intending to terminate.”

Vehemently I shook my head and told you no. I felt so strongly that it was not for me to decide when my daughter’s life would end. I had felt her moving, felt so much love for her already. Even if there was no hope that she would survive for long after birth, I could not choose to end her life myself. In amongst my devastation, I felt angry that you had made that assumption. To offer it as an option was one thing, to assume it was our intention was quite another.

You looked a bit taken aback by my response, but proceeded to tell us that our child would be offered compassionate care. She would probably only live for a few hours. You hesitated and then, in a dismissive tone, mentioned the fetal surgery that Boston Children’s Hospital carried out. You didn’t think it would be suitable and it was a bit radical. However, you felt you should mention it for completeness. I thank God fervently that you did feel prompted to mention it though. That throwaway comment led us to investigate the option further. We were later offered the fetal surgery that gave our baby a chance for life and gave us that tiny glimmer of hope.

You apologised for not giving us better news and showed us out into the corridor. You and your colleague wandered off cheerfully chatting away together.  We were left in a bare hospital corridor, feeling utterly devastated and trying hard not to break down in amongst all the people passing by. The contrast between your cheery banter as you walked away and our desolation was so very stark.

I understand professional detachment, but there was so little compassion showed that day. We were given no space to take in the news. There wasn’t even a box of tissues on the table as you told us the news which broke our hearts and shattered our world. We were just another couple coming to a clinic appointment. We hadn’t been prepared for such bad news. Both of us had fought to hold ourselves together as you explained the prognosis.

Perhaps that explains the lack of compassion.  Did you just see us as calm and stoic rather than being afraid to let such enormous depths of emotion out in front of a stranger? If you’d seen us a few moments later having managed to find the hospital chapel; the only place where we could think of where we could grieve with some degree of privacy, you would have seen just how utterly distraught we were at the news we had been given.

We’ve had many other appointments before and since that one. We’ve had bad news on many of them. Bad news which was always given sympathetically, always with space to absorb. We’ve been given time to ask questions and a few moments of privacy to allow us to cry together. The experience from your clinic appointment that day stands alone.

Several years have passed since that appointment but with reviews of children’s cardiac services and new standards being set, I find myself thinking of it more and more. We transferred our surgical care to a hospital that was prepared to give our daughter a chance. It’s a smaller hospital which currently doesn’t meet the target numbers being proposed and therefore is under threat. If it closes, our care will almost certainly transfer back to your hospital which does meet those numbers.

Your hospital is a good hospital, I know. It saves the lives of so many babies and children. I have a lot of respect for those wonderful doctors and nurses who work there. But, in all honesty, I’m not sure I’d ever want to set foot in it again. My memories of that day are still painful to recall and our experience does not seem to have been a unique one. Others have also told me that they felt their care was very impersonal. I wonder if being a bigger hospital increases the degree of detachment between doctor and patient?

I am sure that you are a good doctor, that you give great care to your patients. But please stop and remember that the person you are treating and their family are human beings with feelings. A little empathy and compassion when giving bad news would go a very long way.

Written in response to this week’s prompt: ‘a letter’