Living life without Jessica is the hardest thing I have ever done. Some mornings I wake up, and wonder how on earth I can endure the day ahead. Some days are bearable; but on other days, the reminders of all the little things that we have lost come thick and fast.

Losing Jessica is a devastating loss, but it wasn’t just Jessica that we lost the day she died. We lost who we were, our hopes and dreams, our ‘normal’ life, our innocence. The belief that somehow if we did the right things, prayed hard enough, we could keep our children safe. We lost our completeness, our future family moments. So many little losses that keep unfolding as time goes on. Each little subsequent loss is a stab in my heart, bringing that ever-present ache for Jessica back to the forefront. Some of them might seem trivial, but the storm of grief is unpredictable and sometimes something seemingly insignificant can trigger an unexpected torrent of emotion. 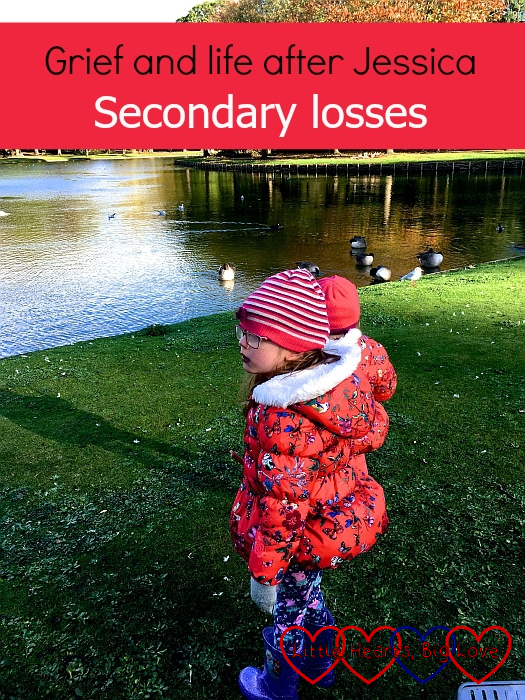 The loss of friends and community. People who were once part of our everyday lives; the parents I chatted to at the classroom door. Suddenly no longer being part of groups and the loss of part of my own identity as a result. A connection snapped in an instant. And as hard as you try to hold that connection together, the fact remains that the link between you is broken and keeping it often requires too much effort to maintain.

Some people try to maintain it; for others it is easier to let it go completely. My grief is too much; my reality a reminder of every parent’s worst nightmare. They don’t know what to say; how to act. And so they avoid. I see them look away, afraid to meet my eyes. Pretending they don’t see me so they don’t have to make conversation. I get it, I really do. Doesn’t mean it hurts any less though.

That feeling of always being on the outside looking in. Not quite part of the world in the same way we were before. I find it hard these days to make small talk with people. I’m aware of how much I’ve hidden behind my children and how much my social interactions revolve around them. Now when I meet other parents at groups, I rarely initiate the conversation because I know eventually they’ll ask how many children I have. And it’s not that I’m uncomfortable talking about Jessica – it’s that I know that they’ll suddenly become awkward and not know what to say, or say something well-meaning but insensitive.

Conversation can be hard. I want to talk about Jessica, but there are no new memories to share. It’s clear that some people feel very uncomfortable if I mention her. Sometimes, I sense an unspoken implication that I should stop going on about her; that I should be moving on by now. Like I could ever move on. Like there’ll ever be a time when she isn’t in my thoughts and I don’t want to talk about her. I hate the fact that I can’t talk about Jessica as easily as I do about Sophie and Thomas.

The links to our life with Jessica that gradually disappear one by one. Each time we lose a link, it feels a little like losing Jessica all over again. I have to mourn each of these losses before I can readjust.

The loss of all those future moments. All the things that can never be. Never getting to see two little girls at school together. Never seeing Thomas being adored and looked after by two big sisters. Forever wondering what life as a family of five would have been like in reality; how my trio would have been together. 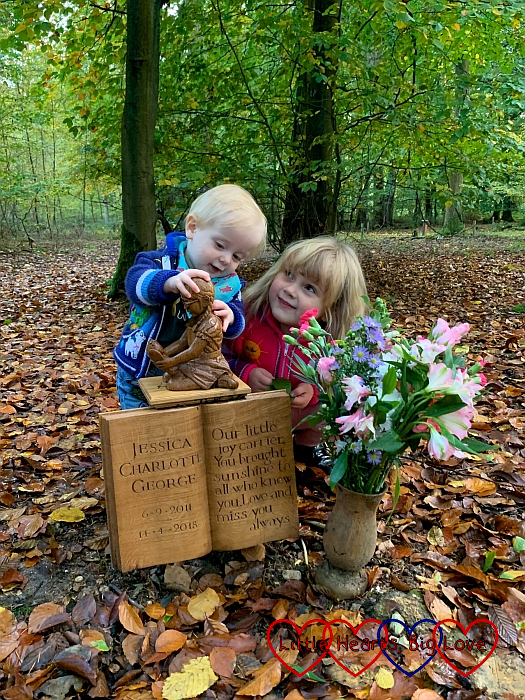 For Sophie, there’s the loss of her constant playmate, a sibling who was close in age. She’ll never have that kind of sibling relationship again. She and Thomas have a beautiful bond, but it is a very different one to the one she had with Jessica.  Her place has shifted – she’s gone from being the little sister to being the one that leads the way. When Jessica died, it felt like life shifted backwards by two years – we went from having a six-year-old and four-year-old to just having a four-year-old. Now we’re back to life with a six-year-old and starting to experience firsts with Sophie that we never experienced with Jessica.

The loss of ourselves. We’re no longer the same people we were before Jessica died. Sometimes it feels like we’re getting to know each other again as a couple, both of us still trying to navigate this world of child loss. We grieve in different ways – sometimes we grieve together; sometimes we pull apart. Wanting to support each other, but not having the emotional reserves to be able to do so. Knowing that we need each other. My husband is the only other person who completely understands my pain at losing Jessica. We have travelled this journey together; we share memories of Jessica that no-one else can share.

Then there are the strange losses that I never would have anticipated. Loss of words. Silly little things sometimes. Like on the bad days, when my husband leaves the house and I say “have a day” because to say “have a good day” feels unachievable. Or when I say to Thomas “aww you love your Sophie” because sometimes it hurts to say “you love your sister” when it should be “sisters”. Not being able to refer to “the girls” when talking about doing something with the children because it is now just “the children” or “Thomas and Sophie” and never “Thomas and the girls”.

The pain of losing Jessica is something that we have to face every single day. Every day we wake up, and every day Jessica is still dead. Sometimes we anticipate the storm of grief; sometimes it blows up as if from nowhere. There are days when I feel like I am wading through treacle, failing at life and motherhood; the simplest of tasks feeling overwhelming. There are days when I can smile and laugh, and appear “normal” again.

Life without Jessica is so very hard. I try to focus on the positives, try to live my life as Jessica would want me to. Taking it moment by moment, accepting the storms when they come and allowing myself to mourn each loss as it makes itself known.

10 thoughts on “Grief and life after Jessica: Secondary losses”