The heart family day out at Paultons Park has always been a highlight in our summer calendar. Last year, we missed out on it due to being in limbo over whether Jessica would have surgery over the summer. We ended up taking Jessica to Paultons Park later in the year for a birthday treat instead. Sadly, that was to be our last visit there with Jessica. 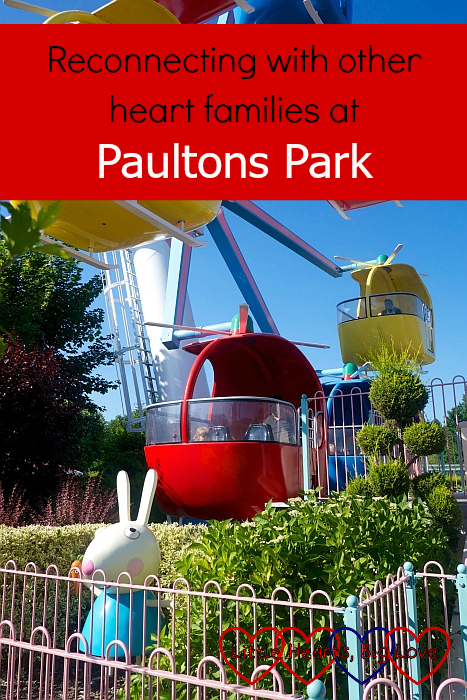 One of the things that I have struggled with since Jessica died is losing my identity as a heart parent. As hard as I knew it would be to return somewhere that held so many memories of days out with Jessica, I wanted to have a family day out again with the other heart families. To still feel that we were part of that community and to catch up with some of the friends we had made during our hospital stays. Losing a heart child affects everyone in the heart family community. It brings home the fear that we all live with as heart parents. I knew that this could be hard for our friends to cope with. Would we still be welcomed or would people avoid us?

I needn’t have worried. From the moment we arrived, we were greeted by another heart mum who gave us all a hug. Everyone we spoke to expressed their condolences but there was no awkwardness, no feeling of an elephant being in the room. Talking about Jessica was as natural as it had ever been. We were all heart parents, sharing stories about our heart children as we had always done. It didn’t matter whether they were with us physically or carried in our hearts. Of course, there was sadness that Jessica wasn’t there with her friends, but it meant so much to us to feel so welcome and know that we were still part of the heart family community. 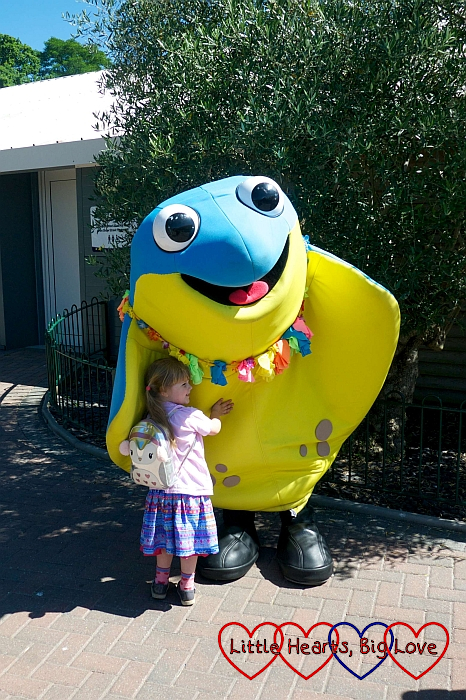 We’ve tended to start off at Peppa Pig World on previous visits. This time we decided to leave it until the afternoon in the hope that the queues would be shorter. We started off at Critter Creek instead where Sophie enjoyed a train ride on Professor Blast’s Expedition Express. 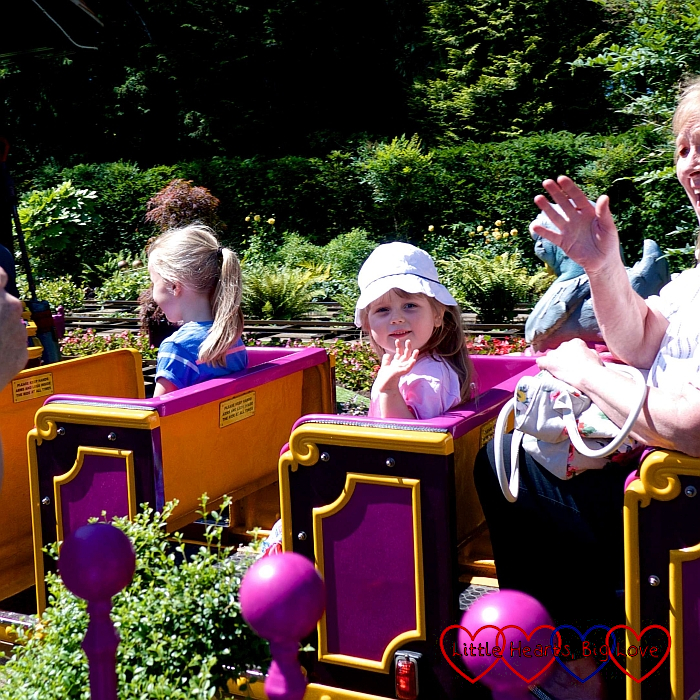 We then made our way over to Water Kingdom splash area stopping along the way to see a Tyrannosaurus Rex at the Alive Dinosaur Encounter. Thankfully it seemed to be quite a friendly one! 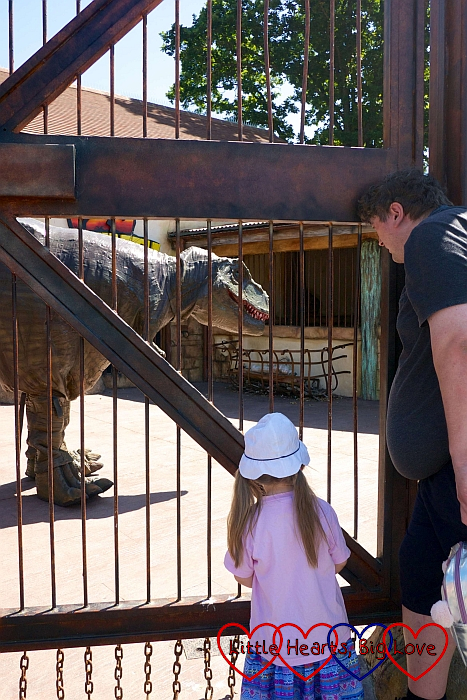 Sophie had a wonderful time playing in the water fountains in the splash area. We sat in the shade, chatting with another heart family while watching the children keeping cool in the water. I have to admit I was very tempted to join them there though! 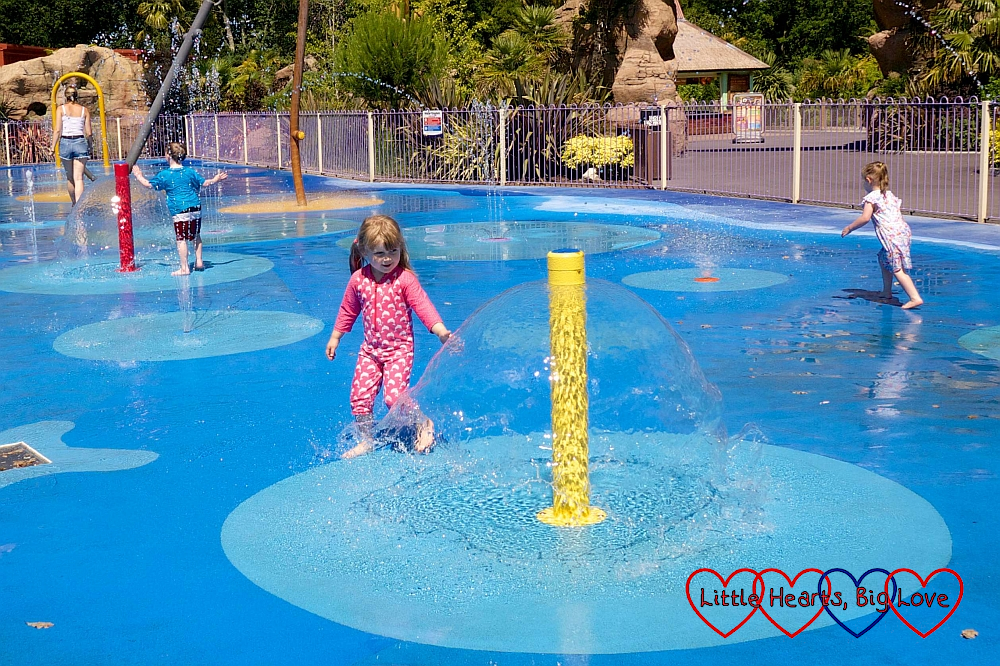 Playing in the splash area occupied most of the morning. There was just enough time afterwards for Sophie to have a ride on Seal Falls before it was time to meet up with the other heart families for a picnic. Watching Sophie on Seal Falls brought back a lot of memories. She and Jessica loved going on this ride together. It was one of their favourite rides outside Peppa Pig World. 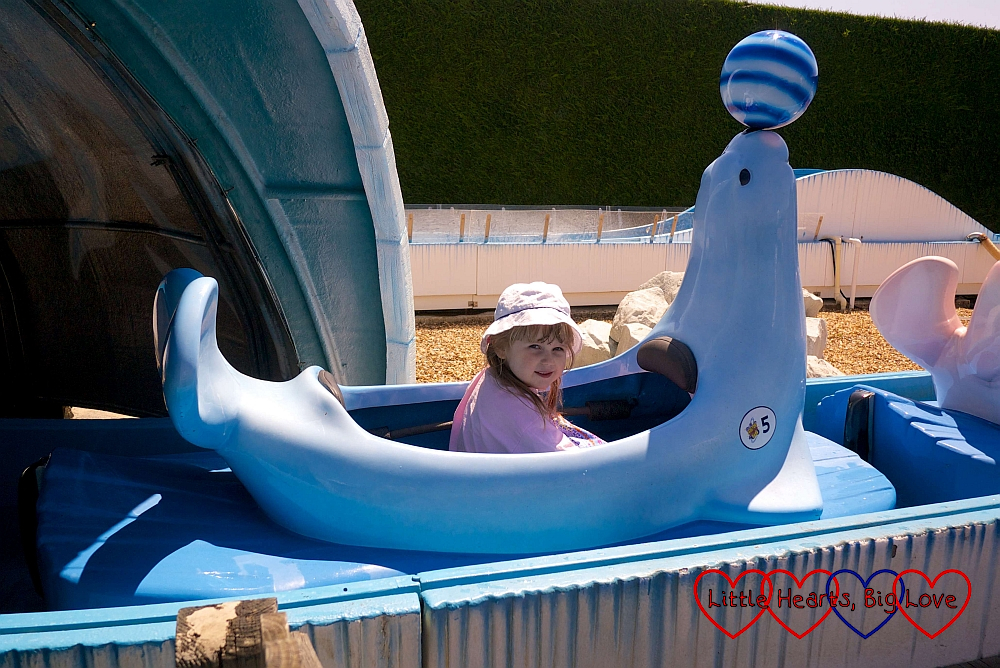 One of the things I love about Paultons Park are the pretty gardens. These are lovely to walk through when heading between different areas. They also provide perfect spots for having a picnic. We met up with the other families near the Japanese Garden. Our busy morning seemed to have tired Sophie and Daddy out though! 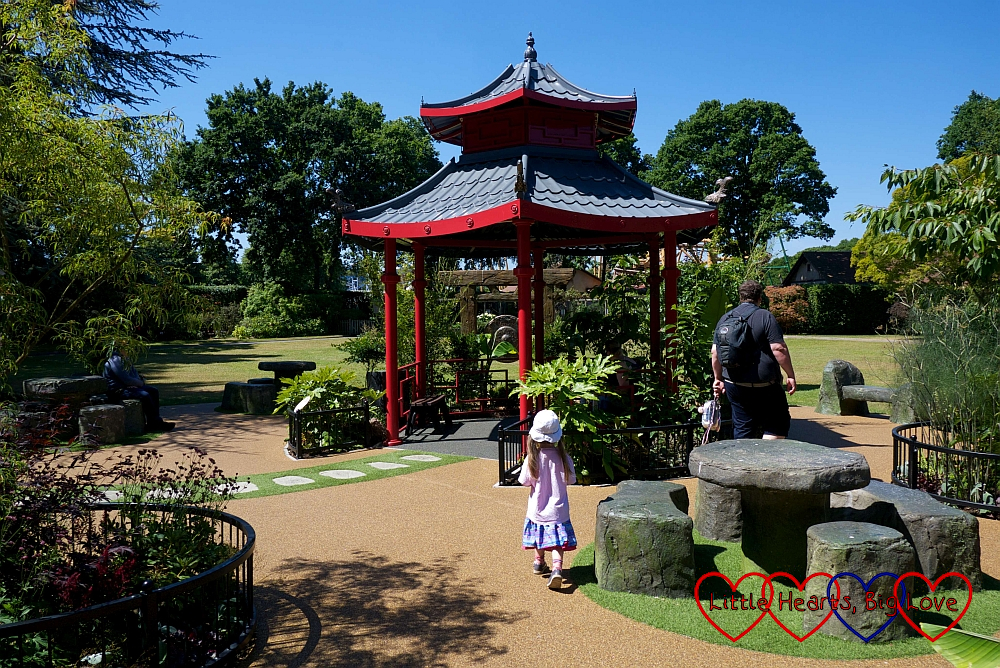 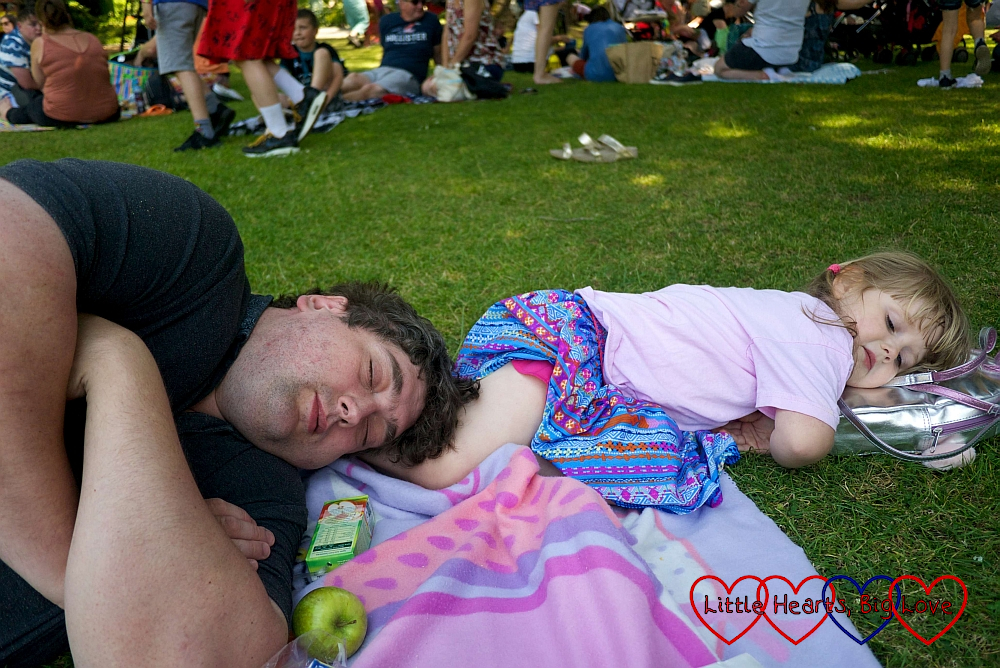 It was lovely to see Sophie making friends with the other children. There were a couple of little girls in particular that became her new “best friends”. Watching her walking hand-in-hand with her new friends reminded me so much of how she and Jessica were together. I even heard her telling one of her new friends about Jessica in her usual matter-of-fact style: “I have a sister called Jessica, but she isn’t here anymore.” It was lovely to hear her talking about Jessica again although it did also make me aware once more of how much she must miss her big sister and the beautiful bond they shared. 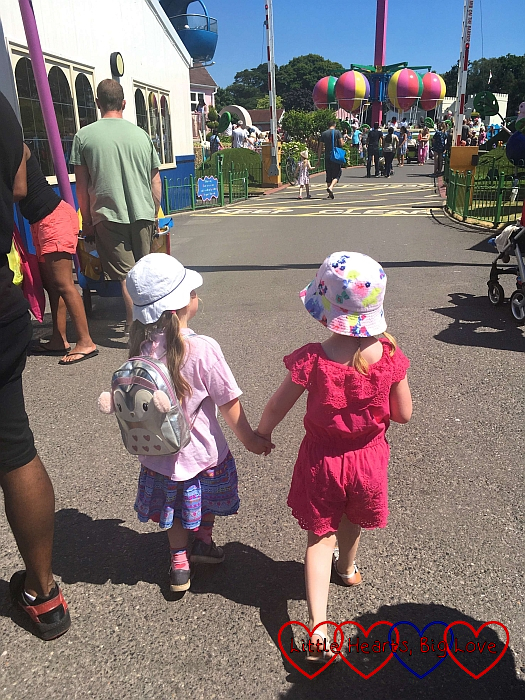 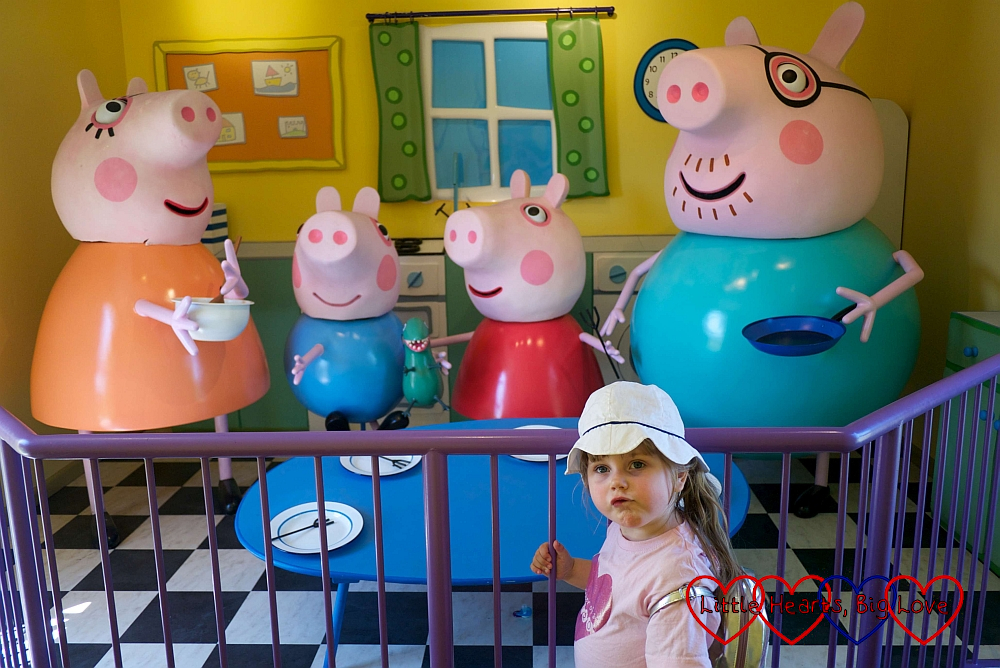 Sophie was keen to try out the two new rides at Peppa Pig World. As expected, these had the longest queues but we didn’t have to wait more than 20 minutes for either which wasn’t too bad. Sophie loved looking at the views across Peppa Pig World from her carriage ride on The Queen’s Flying Coach Ride. 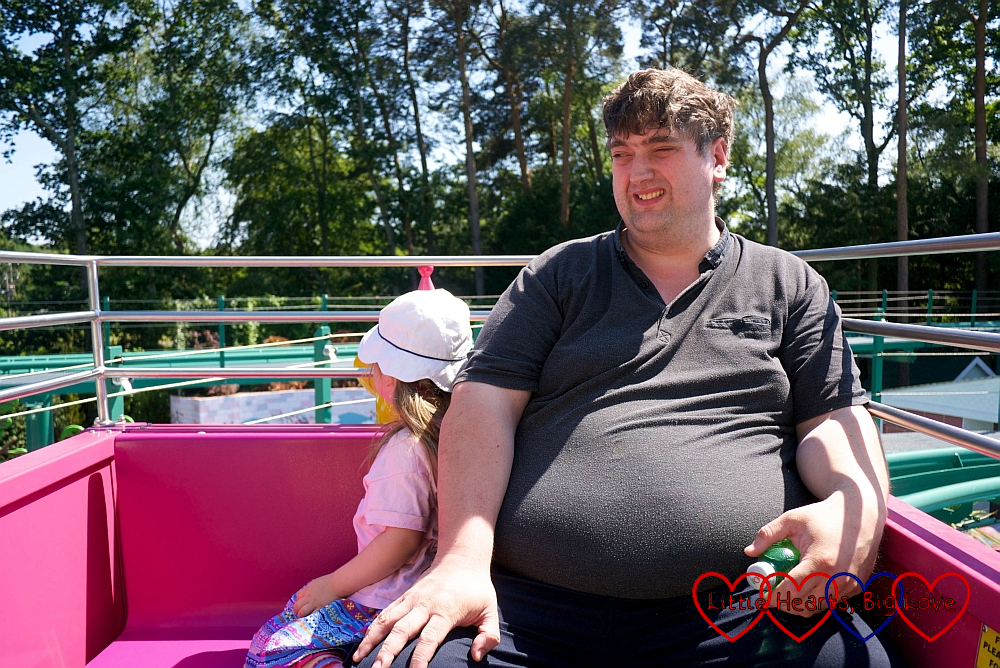 Hubby took Sophie on Grampy Rabbit’s Sailing Club ride as this one wasn’t recommended for pregnant women despite looking like a very gentle boat ride. 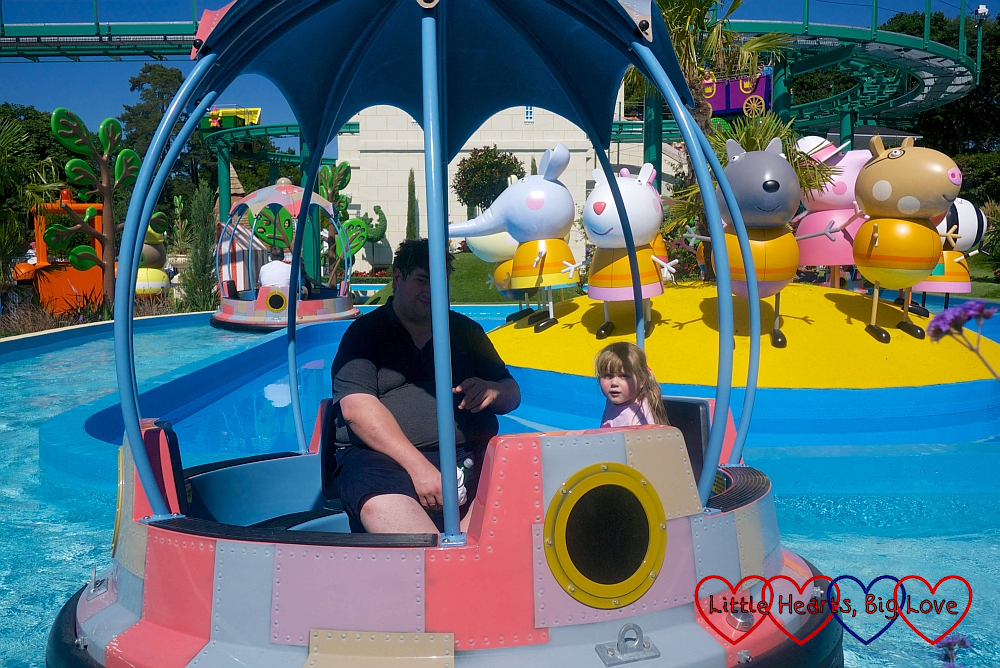 It was very hot waiting in the sunshine. I was quite relieved when hubby suggested going to George’s Spaceship Play Zone afterwards to try and get out of the sun and cool off while Sophie had fun in the soft play. It was certainly much cooler in there than it was outdoors! 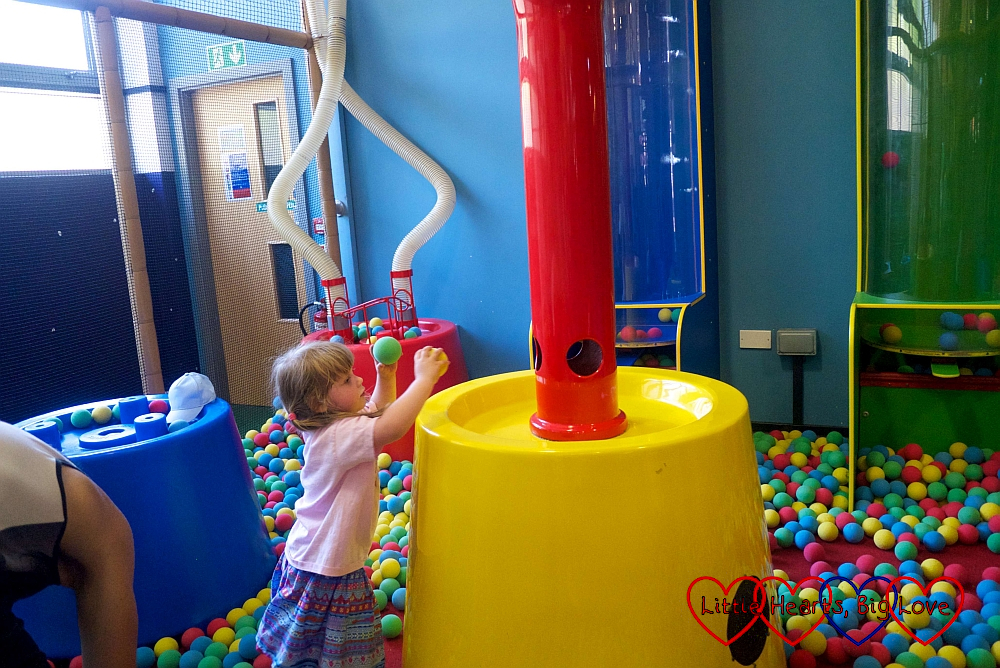 Once we’d all cooled down, Sophie and hubby headed over to George’s Dinosaur Adventure ride. I made sure I stayed in the shade this time while waiting for them! 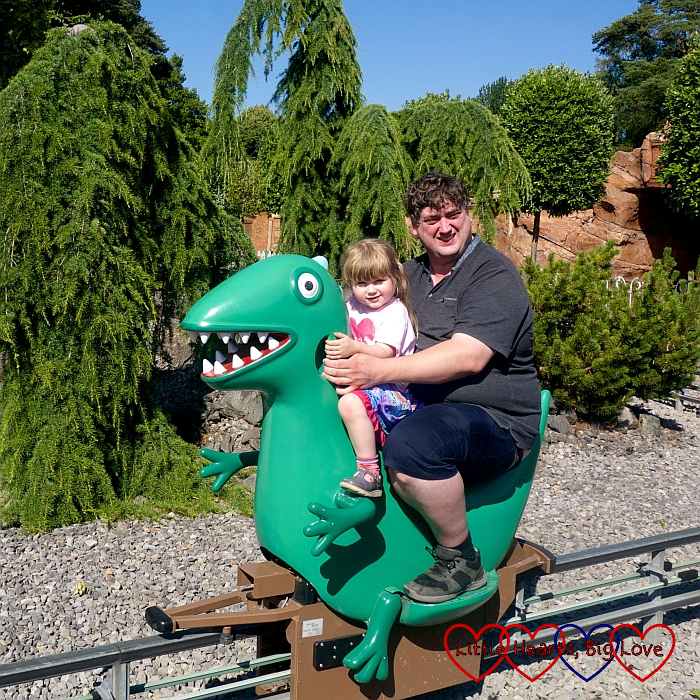 Sophie bumped into one of her “best friends” from earlier in the day at Daddy Pig’s Car Ride. She and her new friend enjoyed going on this together. It was one of the few rides that I could go on too! Her friend’s mum then took them both for a ride on Grandpa Pig’s Boat Trip before it was time for Sophie’s friend to go. 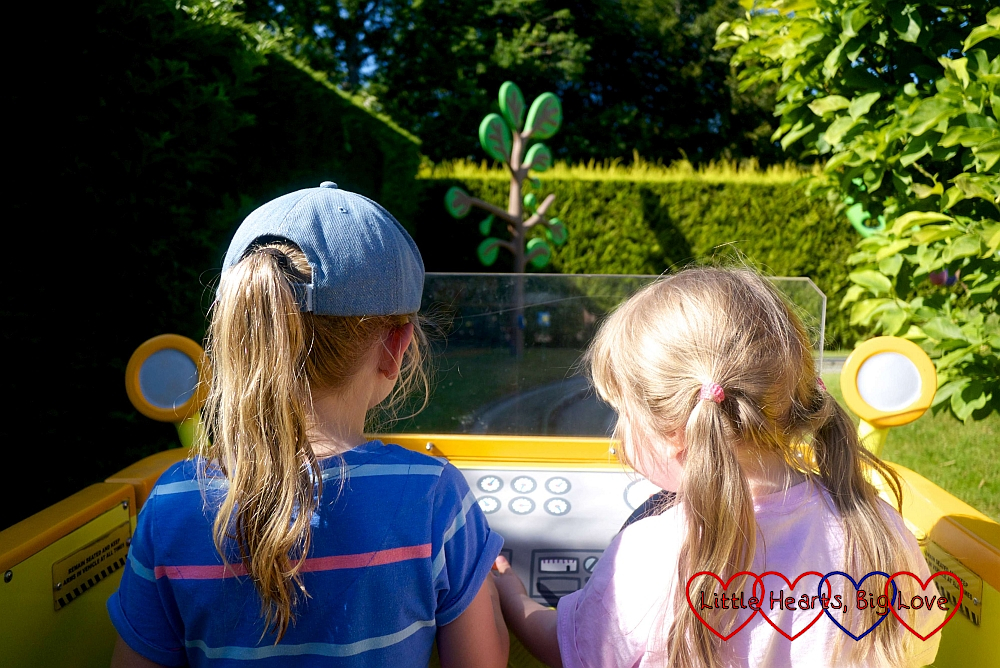 Hubby and Sophie finished off the day with a ride on Peppa’s Big Balloon Ride and Miss Rabbit’s Helicopter Flight. As we’d found before, the queues were very short at this time of day so it was worth leaving them to the end.

I was so glad that we’d been able to have a day out with other heart families again. I did find the day quite emotional at times. As with Legoland, there were memories of Jessica everywhere we went and my heart ached so much for my big girl. It was good to be able to talk about her so freely and easily though and to be reassured that we are still part of the heart family community. Sophie particularly enjoyed making new friends and hopefully we’ll get to see some of them again at another meet-up.

20 thoughts on “Reconnecting with other heart families at Paultons Park”