Each year, Families of Ocean Ward organise a day out at Paultons Park for the heart children who have been treated on the ward, and their families.  It’s become one of the highlights in our summer calendar – the girls get to spend a day at Peppa Pig World and we get to meet up with other heart families too.  This time around, we also had Auntie Fizz and cousins Ebony and Erin staying with us, which made it even more fun. 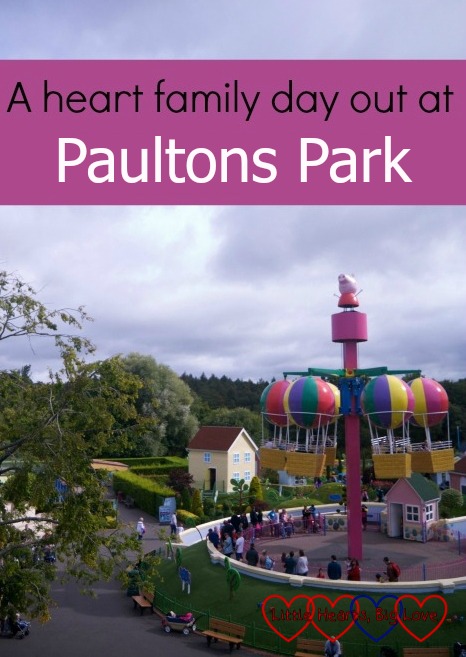 We arrived early at Paultons Park to pick up our tickets and headed straight for Peppa Pig World and the Windy Castle ride.  Hubby was a little too enthusiastic about spinning our gondola although Jessica and Sophie seemed to enjoy it even if Mummy wasn’t quite so keen!  Auntie Fizz, Ebony and Erin joined us on Peppa’s Big Balloon Ride while hubby headed to Daddy Pig’s Big Tummy Café for his favourite strawberry milkshakes. 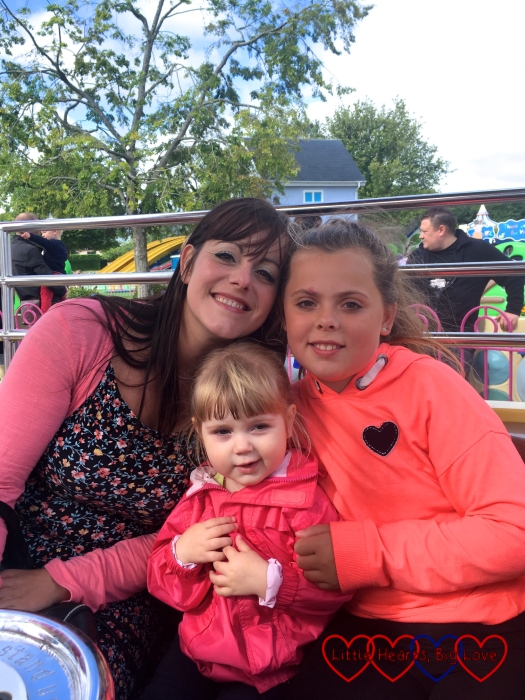 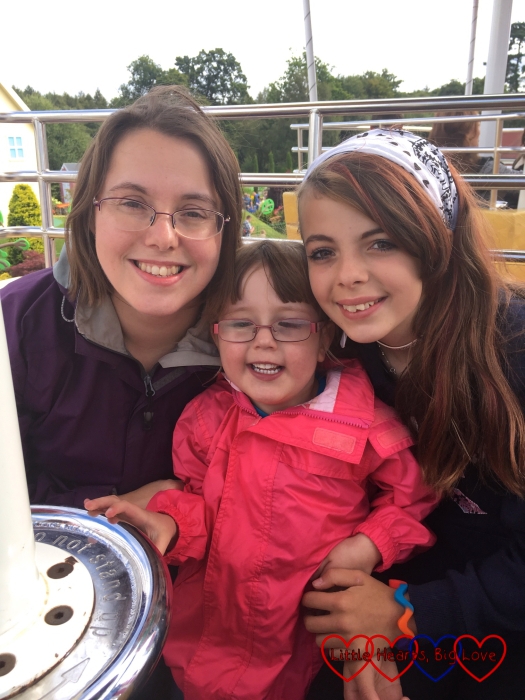 We stopped for a photo with Peppa and George outside Madame Gazelle’s schoolroom before getting in the queue for George’s Dinosaur Adventure.  Auntie Fizz and Daddy stayed outside to watch us on the ride but as we reached the front of the queue, we realised that both Sophie and Jessica needed to go on with an adult.  While Ebony and Erin were big enough to go on by themselves, they weren’t old enough to be able to take either of the little ones on the ride.  Cue some frantic shouting and gesturing to Auntie Fizz to come back over and take Sophie on the ride while I went on with Jessica! 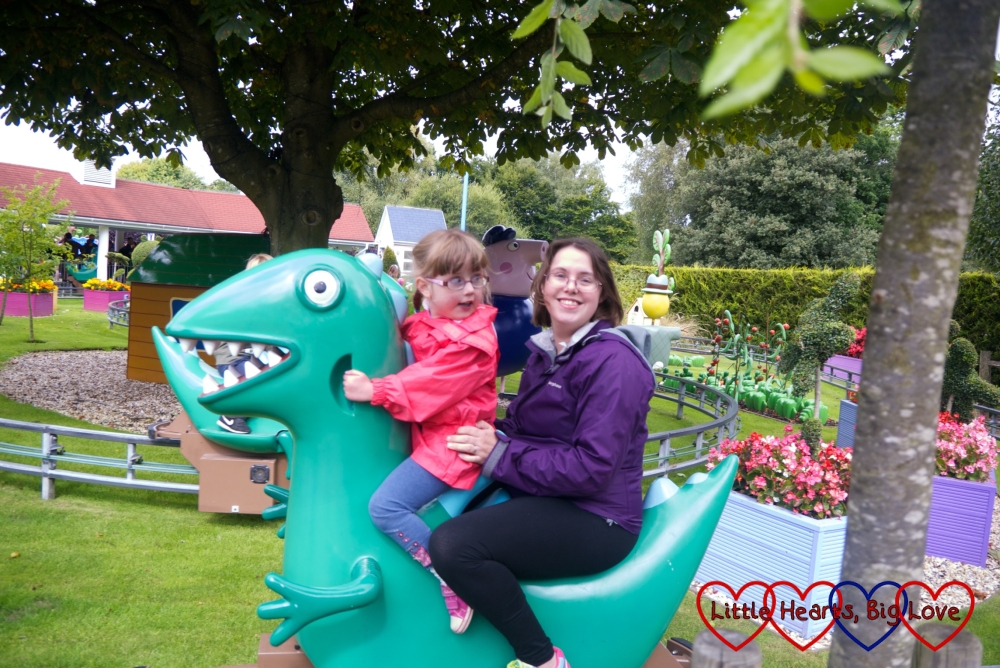 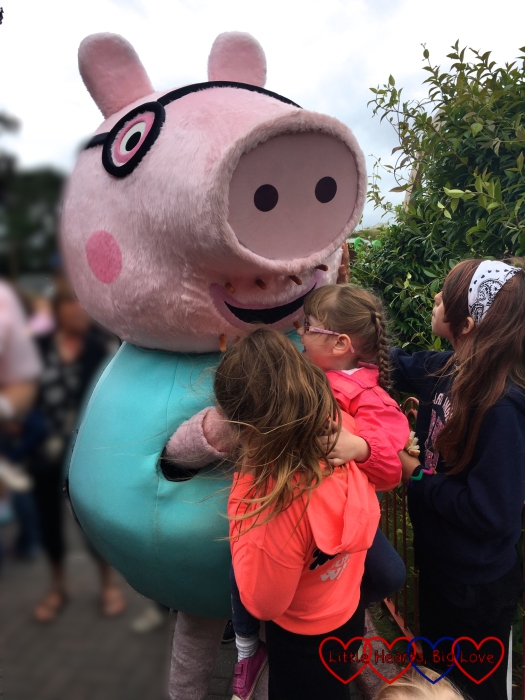 We’ve tended to stay in Peppa Pig World during our previous visits to Paultons Park as Jessica and Sophie love it so much there.  Having the two older girls with us though was the perfect excuse to head off to some other parts of the park and find some rides that we hadn’t tried before. 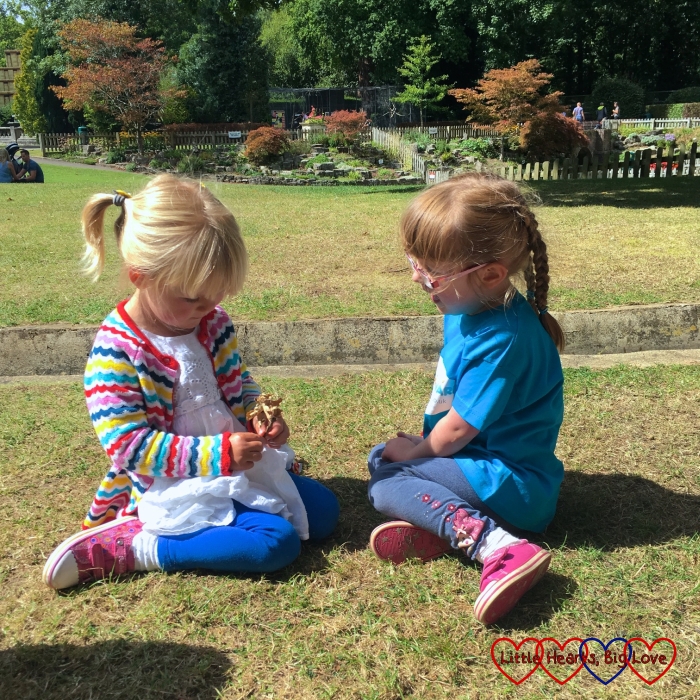 In the meantime though, it was time to stop for lunch and meet up with the other heart families.  We managed to catch up with another heart family who we’ve been in touch with for several years – their daughter has the same heart condition as Jessica and it was lovely to see the two little girls sitting and chatting together.  There was a little stream next to our picnic area and it wasn’t long before the girls had taken their shoes and socks off to go for a paddle. 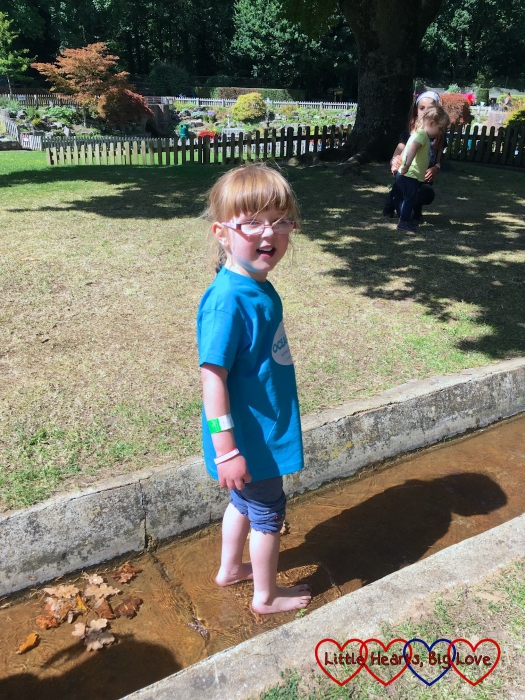 While hubby took Jessica and Sophie off to play in one of the play areas, I took advantage of the opportunity to go on the Flight of the Pterosaur – a suspended dinosaur rollercoaster – with my sister and nieces.  It’s been quite a long time since I last went on a rollercoaster and it was fun to be able to do it again. 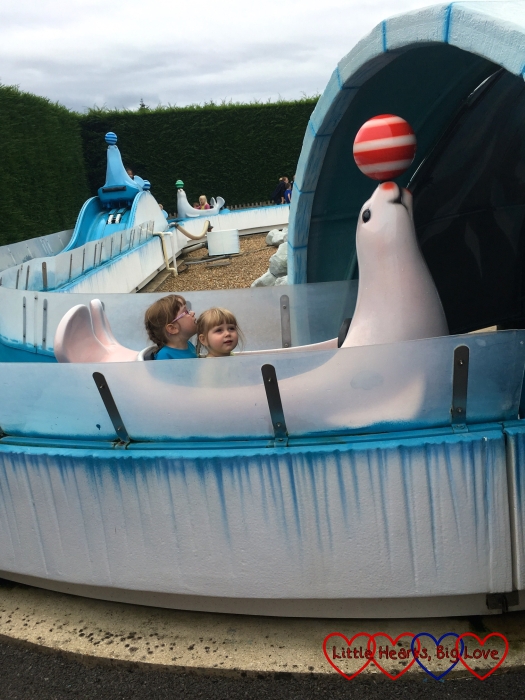 We found a couple more rides that Jessica and Sophie could enjoy.  They loved Seal Falls, a mini log flume ride aimed at small children.  Ebony and Erin were quite disappointed that they were too big to go on it with them! They were a little too big for the next ride – the Digger ride – too, but the ride operator let them go on with the little ones and all four girls seemed to be enjoying themselves! 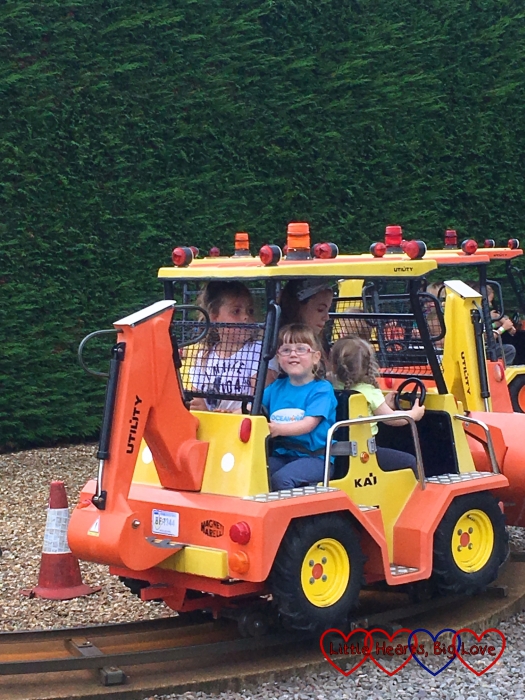 Jessica wanted to go to the splash area next and the two older girls wanted more rollercoasters so we split up for a while.  I wasn’t sure how long Jessica would cope with the splash area as it was starting to get a cooler and rainy but she and Sophie were quite happy running around in the rain, jumping in the fountains and splashing about.  Thankfully, there was a big people dryer nearby so that when Jessica did start getting cold and needed to come out, it was easy to warm her back up. 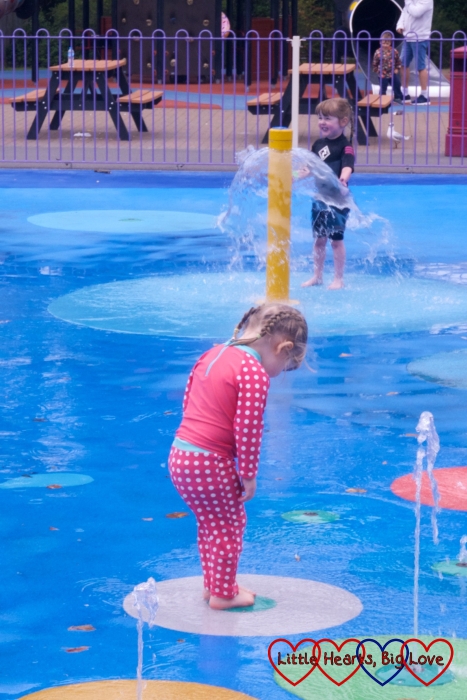 Having got dried and warm again though – naturally Jessica’s choice for our final ride of the day had to be the Raging River log flume ride.  Thank goodness for waterproofs though – we didn’t get as wet as I thought we might! 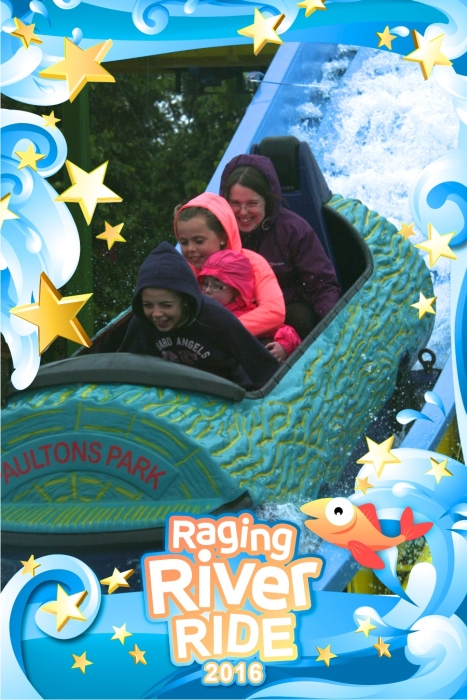 It was lovely to have a family day out and to explore some of Paultons Park outside of Peppa Pig World too! There are still areas of the park that we’ve yet to visit though – maybe we’ll get to explore them next time.