I can’t quite believe that I’m now firmly into the third trimester of this pregnancy. Physically, the second trimester was a fairly easy one. Emotionally it has been the hardest time of my life. I remember being on holiday when I was around 22 weeks pregnant; sitting on the sofa with Jessica lying with her head on my bump and telling me that Peanut was kicking her head. I was looking forward to hitting the 24 week milestone – “viability”. By the time I hit 24 weeks, I no longer cared about that milestone because Jessica was gone. 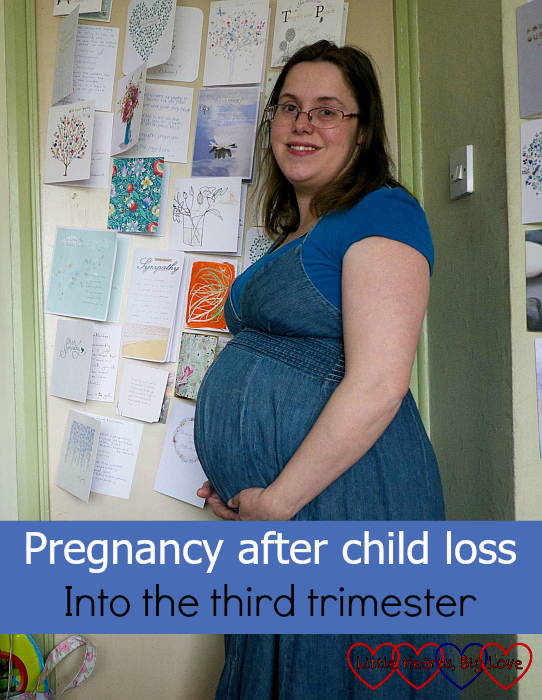 Losing my much-loved first child while pregnant with a much-wanted third has been a huge emotional rollercoaster. I have gone from being excited about this baby to feeling a whole mixture of emotions about it. One of the things that influenced our decision to have a third baby is that we never wanted Sophie to be on her own should anything happen to Jessica. It is utterly heartbreaking to already be in the position where that has become our reality.

I know that probably sounds wicked and awful and I don’t mean it to be. I don’t want anything to happen to Peanut. Sometimes I have moments of being scared about any potential bad outcomes with this pregnancy. There is no guarantee that all will be well. Having experienced tragedy and loss does not make us immune to more. I am also scared that I will find it hard to bond with Peanut as I did with Sophie.

I was fairly comfortable throughout the second trimester – to the point that I could almost forget I was pregnant at times. I definitely can’t forget it now! Peanut seems to use my bladder as a football at times and I’m starting to get some Braxton Hicks which can be a little uncomfortable at times.

I’ve started getting restless legs in the evening and occasional cramps when I wake up. My lower back and hips can be achy at times, although I have a wonderful chiropractor who works magic with this. I suffered from SPD with my previous pregnancies, particularly first time around, and she helped a lot with easing this. So far, I’ve not had too much pelvic pain this time around thankfully. I have started to have symptoms of carpel tunnel again though which I had with Sophie. I’m not yet at the point where I feel the need to dig out the wrist splints, but I know I have them if needed.

My bump has certainly popped out a lot more in the last few weeks. I still feel like size-wise it is all quite similar to my pregnancy with Jessica. Looking at the comparison photo though, I seem to be between Jessica and Sophie size-wise.

I had a growth scan at 28 weeks and Peanut seems to be a nice average size at the moment. The sonographer was lovely at the scan appointment. Hubby explained about us recently losing Jessica and she took the time to really listen. She also handed this information over to antenatal clinic so that we wouldn’t have to wait in clinic for too long.

Unfortunately the consultant was not so good. She opened the conversation with “I understand you’re in a bad mood today” which is an awful way to start a conversation whatever the situation. She showed very little compassion or empathy and it is clear from the notes that she didn’t really listen either. I’ve written a letter of complaint which the hospital are dealing with at present. They have confirmed that I will not be seeing that consultant again.

Thankfully, I’ve since had a booking appointment with my friend and former colleague who is going to be my independent midwife again. Having someone who knows me well; who is empathetic and caring and who understands my wishes for pregnancy and birth makes a huge difference. I’ll continue with the growth scans at the hospital for now as having low PAPP-A means there is a higher risk of preterm labour and low birth weight. All being well though, I’m hoping to have a home birth again.

Peanut has been lovely and active. Those movements are now big enough that I can see my bump moving at times. We get lots of kicks and wriggles, and times when Peanut has hiccups. Whenever Peanut has hiccups though, I can’t help but remember when Jessica had in-utero surgery at 28 weeks. The first sign of her waking from the anaesthetic was her having hiccups and it was the most beautiful feeling in the world.

Overall, things seem to be progressing well and hopefully will continue to do so. I’m trying to enjoy my pregnancy as much as I can. I loved being pregnant with Jessica and Sophie and it feels strange to be so emotionally detached with this pregnancy even though I know that it is understandable.

There doesn’t seem to be a lot of information or support out there for pregnant women who have lost an older child. Everything I have come across so far is very much aimed at women who have experienced stillbirth or neonatal death. It is great that there is so much support for those bereaved mothers but I wish there was more out there for mums like me.

6 thoughts on “Pregnancy after child loss – into the third trimester”