When does parenthood begin? That moment when everything changes; when that person we once becomes someone new; someone whose decision-making and thoughts are changed forever. Does it begin with the birth of a new baby – when we “officially” become mummy and daddy? Or does it start further back with two little lines on a white stick?

For me, the big shift when I went from “me” to “mummy” came when I was 20 weeks’ pregnant. The day we first found out about Jessica’s heart condition. The day we became heart parents.

Whilst the needs of my baby had naturally come before my own since the moment I found out I was pregnant; this was the point at which I knew I would do anything for her. The moment when decisions were no longer about me, but about her. Putting my own fears aside and trying to be strong. From that moment on I was “Jessica’s mummy” and I knew that no matter what the outcome of my pregnancy was, that was who I would always be.

Parenthood changes us forever. It changed me in so many different ways. I became stronger, softer, less selfish. I discovered a capacity to love that was greater than I had ever imagined. All my feelings suddenly seemed amplified. 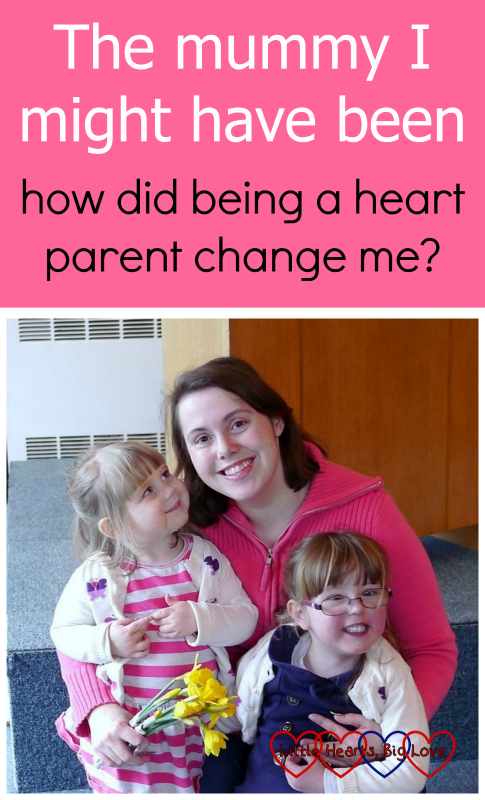 My journey through parenthood has always been tied up with being a heart family. I have never known what it is like to parent without that backdrop of hospital stays and check-ups, the fears and worries that come with having a child with complex medical needs. I have never really known “normality” – I have always been a heart mummy. Even though I am parent to a heart warrior and a heart-healthy child, the parent I am is, and will forever be, influenced by that.

Sometimes I wonder whether I would have parented differently had I not been a heart parent? That need to live in the moment and to make the most of it has had a big impact. Some things I suspect would have been the same. I probably would still have chosen to be a stay-at-home mum. The children would probably have still been allowed to climb into bed with us regularly. My parenting style would no doubt have still leaned towards attachment parenting.

I probably would have more relaxed; taken more for granted. We might not have done quite so many things as a family. That strong feeling of needing to make memories; make the most of the time I have with my babies has certainly influenced the things we do together.

Being a heart mummy has probably been a factor in some of our less conventional parenting decisions. The decision to embrace a family bedroom is probably a key one. I would have tried harder to encourage the children into their own beds in their own bedroom. My fear of the future has certainly influenced my lack of resistance to bed-sharing. That fear of the what ifs, of not wanting to ever be in a position of looking back and wishing I’d kept her closer, cuddled her more. Of being acutely aware that she won’t always be mine to cuddle close; that childhood days are fleeting. Doing my best to prevent the moments from slipping through my fingers.

Who would she have been, that mummy who didn’t have the rollercoaster ride? I will never know. She might have parented differently from this mummy sitting here now, but one thing I know for sure. She would have loved her children every bit as much and that is what matters most.

42 thoughts on “The mummy I might have been: how did being a heart parent change me?”