Raising awareness of congenital heart defects and working with heart charities to help improve outcomes for heart children is something that is very important to me. Each year, I get involved in Heart Week in February to try and raise money for heart charities. For the last couple of years, I have been involved in Tiny Tickers’ fundraising campaign. Tiny Tickers is a charity which works to improve early detection of heart conditions. This in turn, helps to improve outcomes for those babies who are born with a congenital heart defect (CHD).

As many of my readers will know, my eldest daughter Jessica has a complex CHD which was detected at her 20 week scan. She had her first heart surgery just eight weeks later, while she was still in the womb. The procedure was risky and pioneering, but gave her a chance of survival. By the time she was seven months old, Jessica had undergone three open-heart surgeries as well as various other procedures and had spent many weeks in hospital. She will need more heart surgery as she gets older.

Had Jessica’s heart condition not been picked up at her 20 week scan, she would not be here today. As devastating as it was to be told that our baby had a complex heart condition at that scan, we are immensely thankful for it. The sonographer who spotted Jessica’s heart abnormalities is just one of many people we are eternally grateful for; one of many wonderful medical professionals who have helped to save Jessica’s life.

Did you know that 1 in 125 babies is born with a heart problem? Over 5000 babies with a CHD are born each year in the UK. Some of these will have had their heart conditions detected during pregnancy; others shortly after birth but more than 1000 of them go home every year with an undetected, life-threatening heart condition.

Babies with undetected heart defects will often fall into the early stages of heart failure – significantly impacting their long-term quality of life and associated risks of heart failure, including brain damage.  The sooner their heart defect is detected, the sooner they can receive the treatment they need. Detection of heart defects during pregnancy means plans can be made for the birth to take place near to a children’s cardiac unit if necessary. Babies get treatment from the first possible moment. Parents are given time to prepare, to process their baby’s diagnosis and to obtain the support they need.  Early detection also means fewer dangerous and costly emergency admissions to hospital.

CHDs are responsible for 1 in 13 infant deaths in the UK. They are the most common and deadly birth defect in babies. Improving early detection and ensuring that babies get the treatment they need as soon as possible helps to save lives.

Mel got pregnant with Arthur in October 2014 and experienced all the usual excitement and anticipation of what was to come.

But at the 20 week scan, her sonographer said “I’m sorry – I think there is something wrong with the four chambers of the heart.”

Two days later, Mel had the diagnosis – her baby had Transposition of the Great Arteries. It all became very real, very fast. Surgery was necessary but 99% of children survive it, and early detection of her baby’s condition meant that everything could be controlled and planned.

On 11th June 2015, Arthur arrived and six days later, he had open heart surgery to correct his defect.

Mel says, “To be honest, seeing his little body post-surgery was probably the scariest part of the whole experience. He was swollen everywhere and his puffy features meant that he was virtually unrecognisable as Arthur. 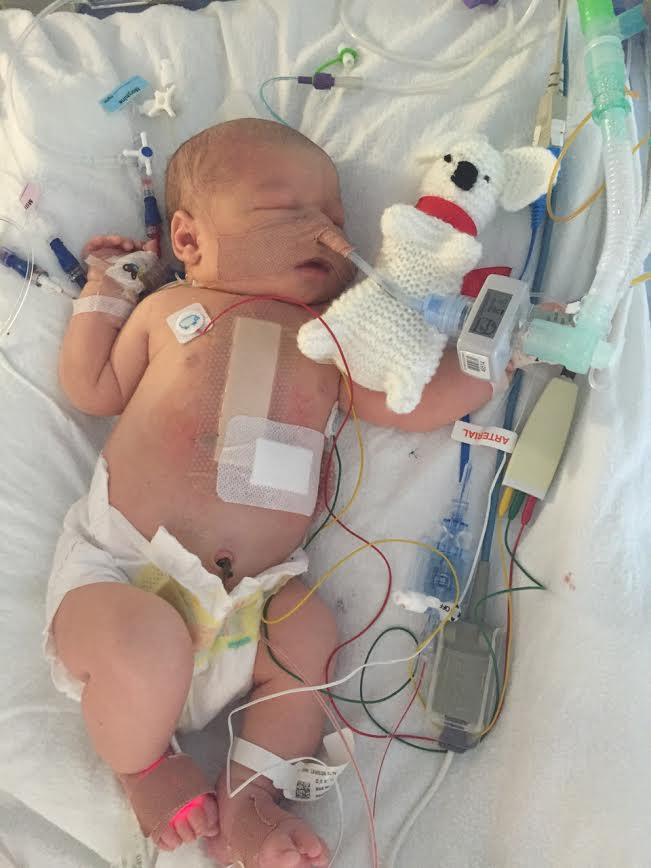 But day by day, he got stronger. The swelling reduced and he was feeding and gaining weight. I was able to take on the ‘normal’ mother duties – nappy changing, holding his hand, singing to him. On the sixth day, we were transferred up to the ward, and by the time he was 16 days old, we were home.”

That was almost 18 months ago and Arthur and Mel have barely looked back since. Arthur has had one cold and a viral infection in that time. Not bad going for any toddler! He is strong and resilient, full of energy, with a wonderful scar on his chest that he can tell his children and grandchildren about one day.

Mel continues, “I will never forget the brilliant medical teams who looked after Arthur and me, but especially the sonographer who saved his life. It was only through her diligence and skill that Arthur’s condition was detected – and I want all babies born with TGA to have the same chance. That is why Tiny Tickers’ work is so important. They train sonographers to be better able to detect these heart conditions and it is vital and lifesaving work.

Ultimately, Arthur is going to lead a normal life. He’ll play sports and there may be limitations later, but that’s ok by me.” 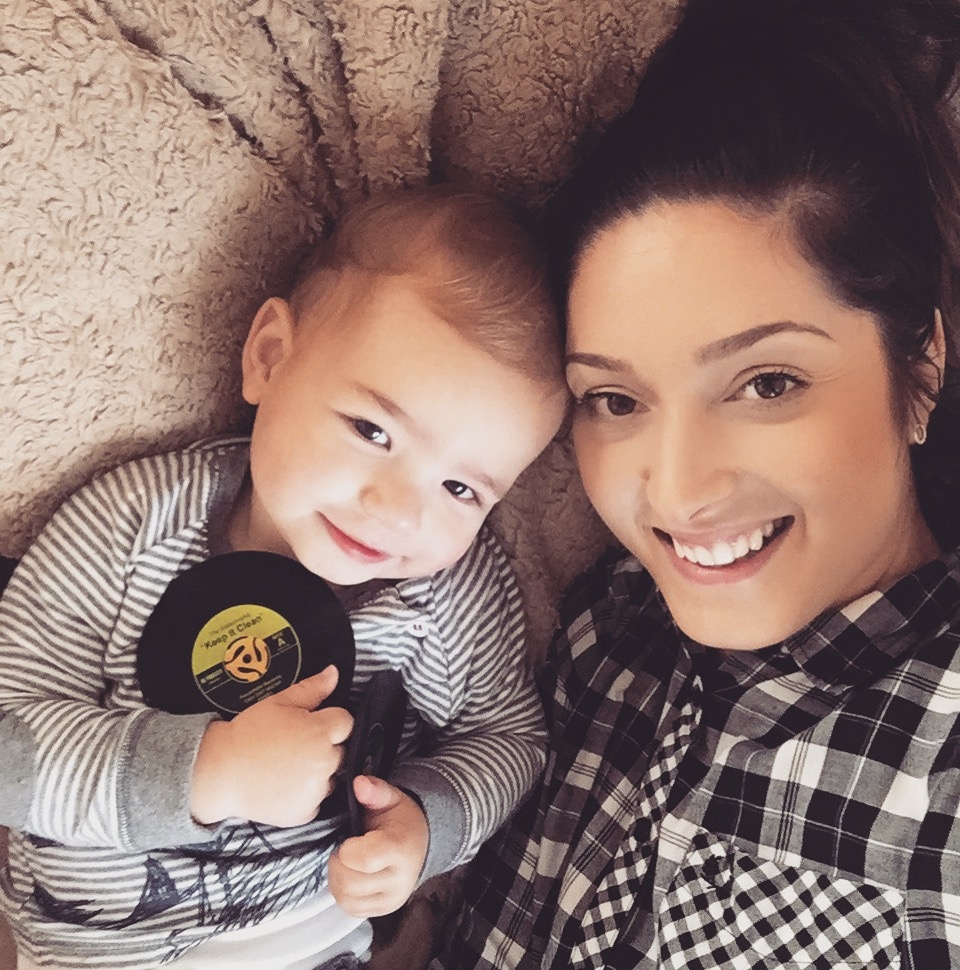 How you can help

This year, Heart Week takes place from 12th-17th February.  You can sign up for a free fundraising pack from Tiny Ticker by clicking here. 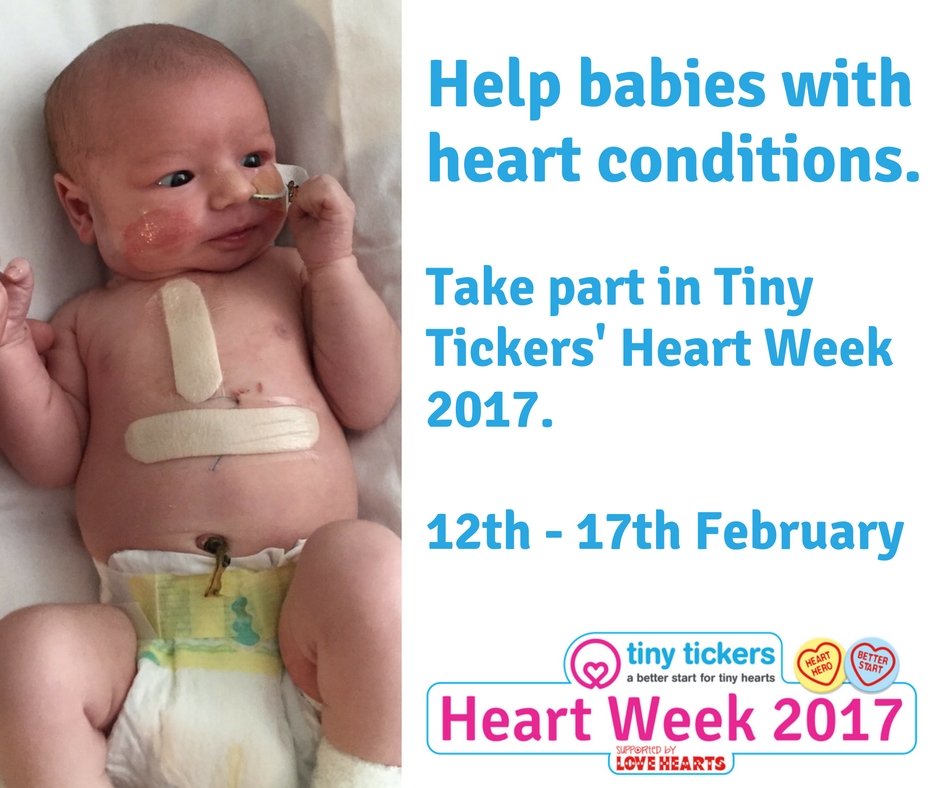 The fundraising pack is full of suggestions of ways in which you can raise money during Heart Week. Here are some of our previous fundraising activities: 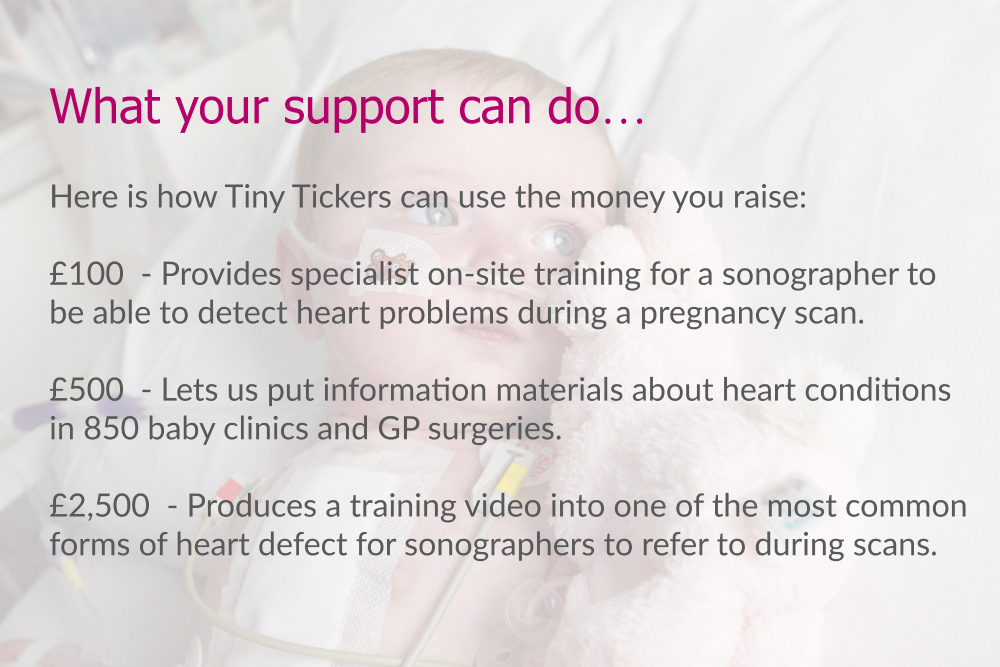 Hope you can join me in taking part in Heart Week 2017 and help Tiny Tickers in their work to save more heart babies’ lives.

I wrote this post because of my previous involvement in fundraising for Tiny Tickers and my own desire to raise awareness of congenital heart defects. This is a cause which is very close to my heart. I have not been compensated in any way for writing and sharing this post. Tiny Tickers is a registered charity (charity no. 1078114)