Sophie has been longing for snow since December. It doesn’t snow very often where we are though, which has been disappointing for her. Last Sunday, the snow finally made an appearance though. She was so excited to look out of the window that morning and see that her wish had finally come true. We certainly made the most of it while it lasted, fitting in nearly all of our favourite snow-day activities. 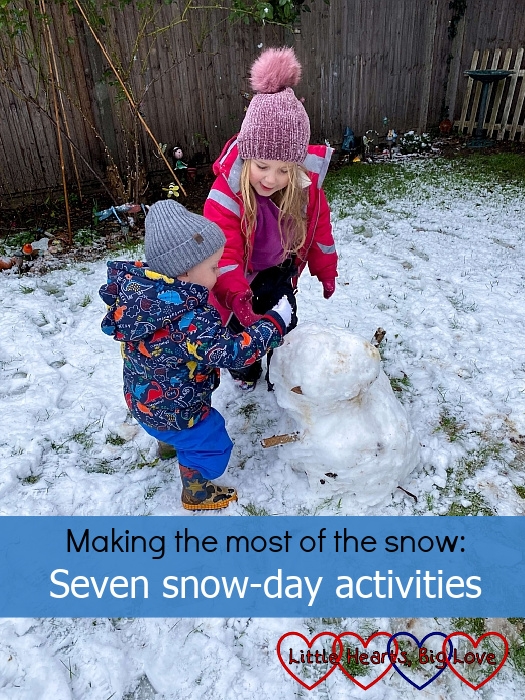 1) Enjoying the magic of falling snow 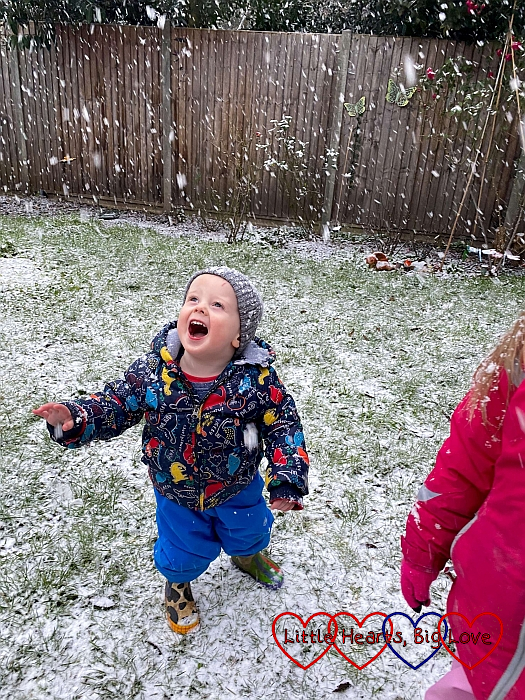 Trying to catch snowflakes on your tongue is fun too. Sophie enjoyed doing that as well as seeing the snowflakes covering her hair and coat. 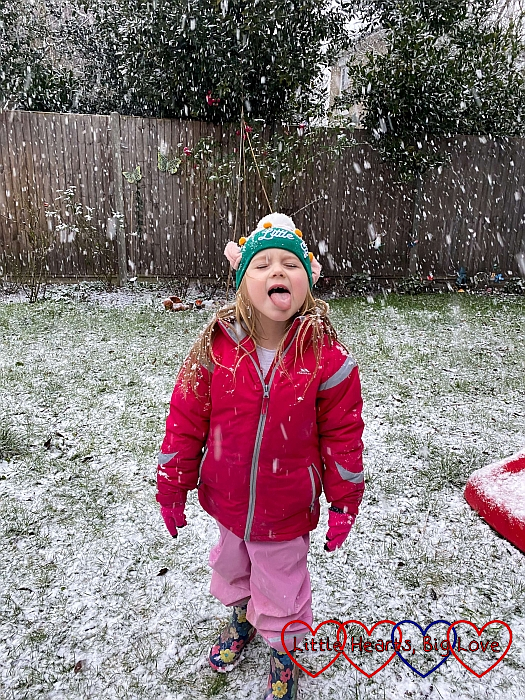 This is always the one thing we have to do when it snows. Even if there’s only enough snow to build a teeny-tiny snowman. Thankfully this time, there was enough for several snowmen. We had two in the back garden and a whole snow family in the front garden. 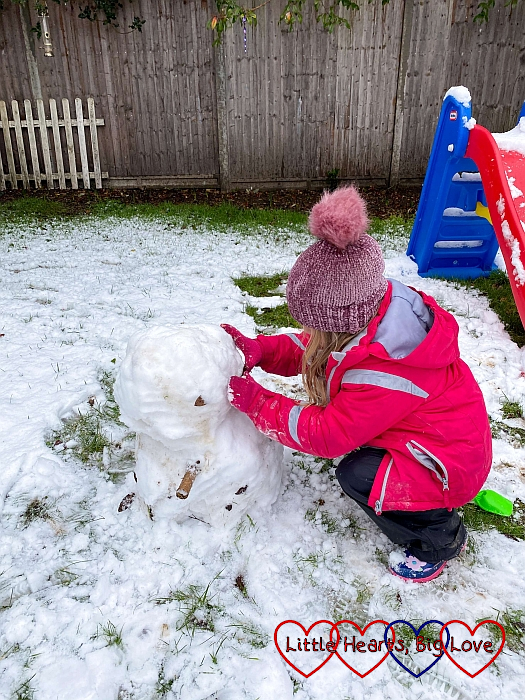 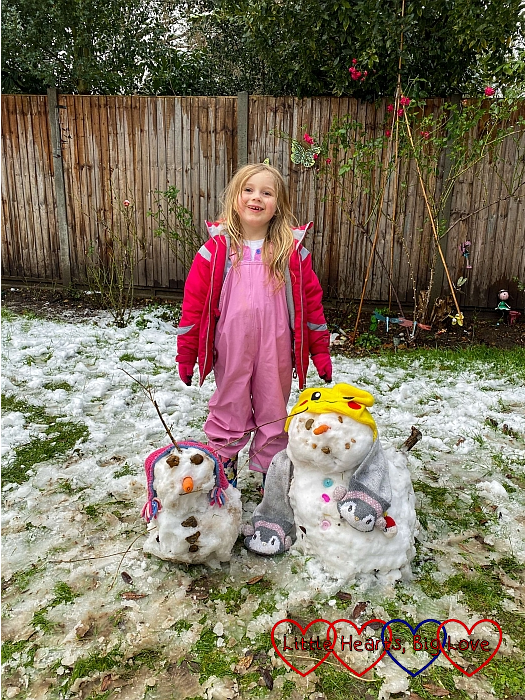 I loved how Sophie recreated our family in snow. Here we are – our family of five. Daddy and Mummy at the back; Jessica, Thomas and Sophie at the front. Sophie was particularly sad when these ones melted a couple of days later. 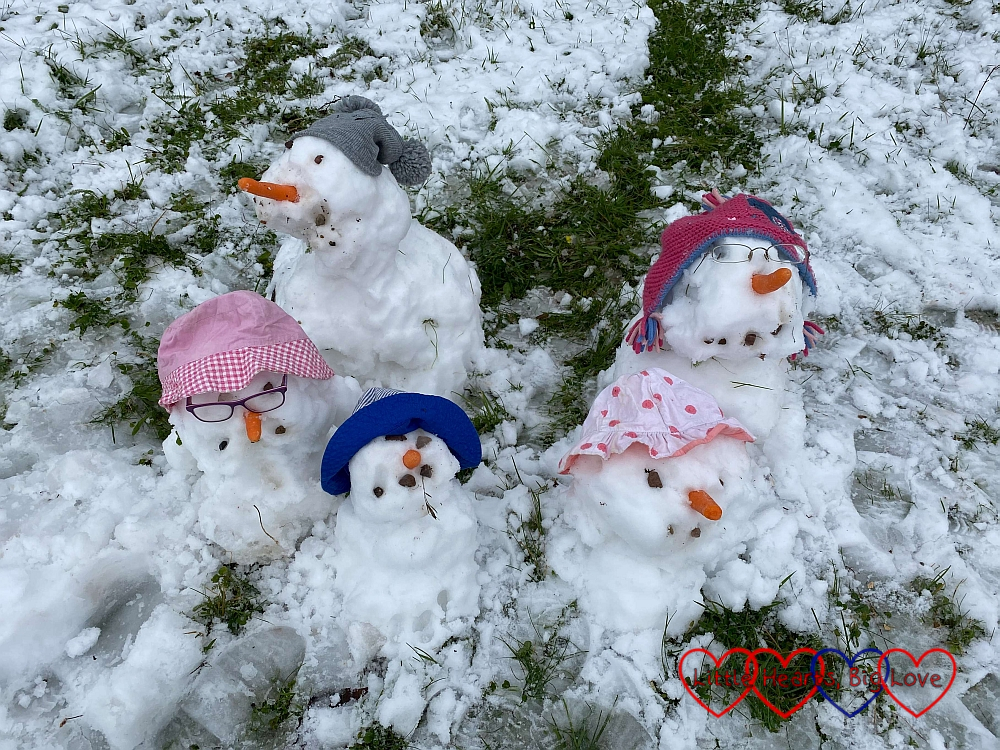 Sophie loves lying down in freshly fallen snow and making snow angels. She did try again after building her snowmen but it’s not quite so effective having cleared patches of the garden! 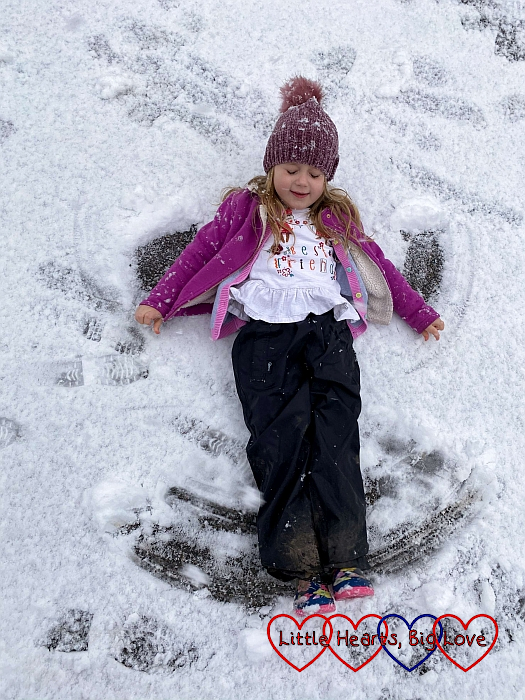 We dug out the toys from the sand box to make snow castles and sea creatures in the snow. Thomas found this a little easier than trying to make a snowman. It also helped keep him amused with a different activity while Sophie was trying to build her snowmen and wasn’t so appreciative of him trying to “help”. 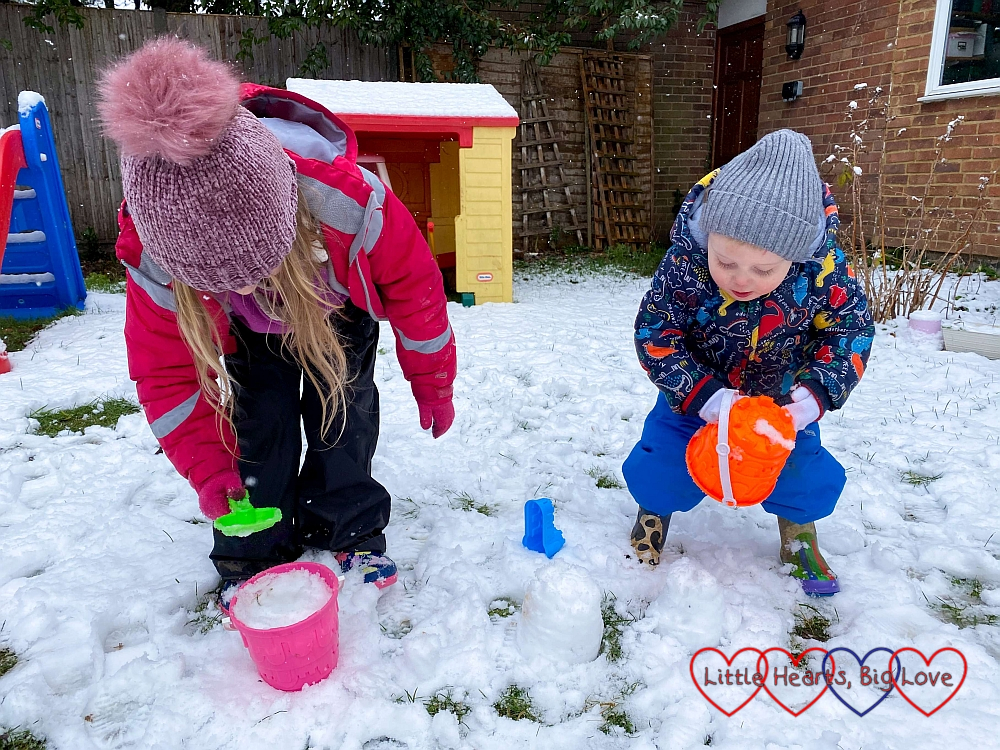 Snow painting is a lovely simple activity which is so much fun to do. We fill small bottles with a mixture of food colouring and water, make a hole in the lid and then squirt the coloured water on to the snow to paint it. Sophie had fun making colourful patterns in the snow and writing her name, followed by Jessica’s and Thomas’s. 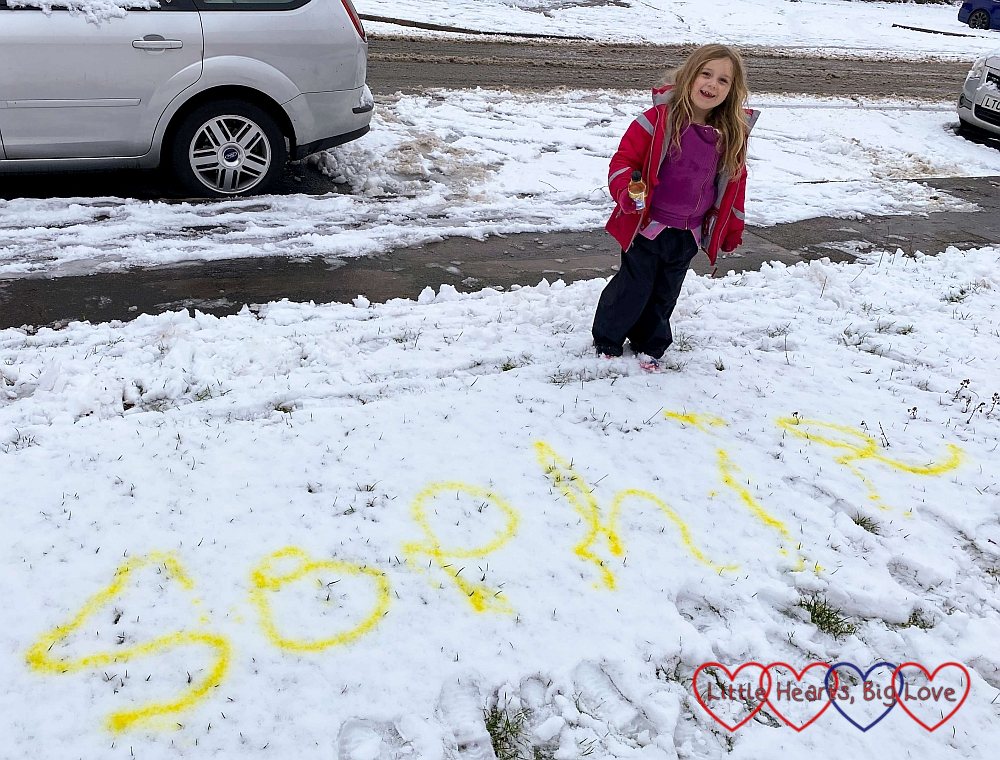 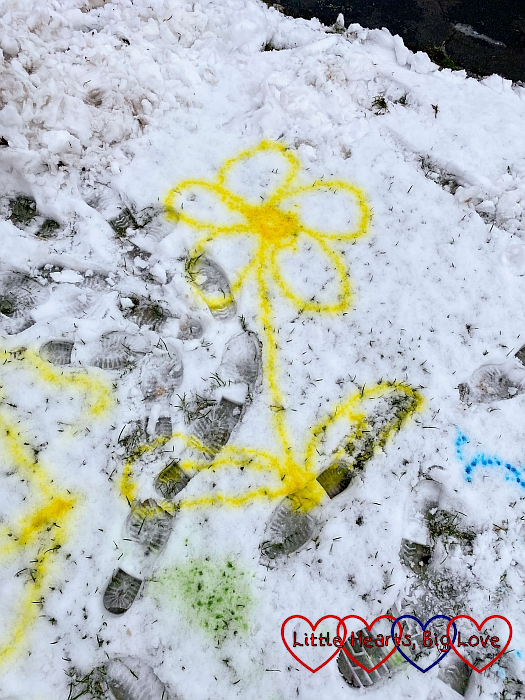 There wasn’t a lot of snow left on the ground by the time we got around to this, having built seven snowmen, so we had to go for a mini igloo. It’s another lovely simple activity – we made snow bricks using a small container and gradually built them up to create our mini igloo. Sophie’s doll seems to be quite happy with it (although I must admit I feel cold just looking at her!). Thomas loved the snow bricks too. 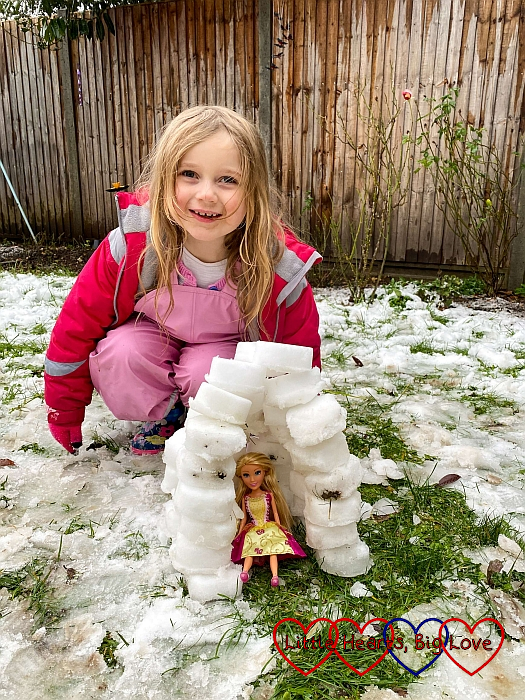 We kept our igloo white this year, but you can also combine this activity with snow painting to make a colourful igloo.

Making frozen bubbles isn’t technically a snow-day activity as it doesn’t need snow – just temperatures below freezing. It was only just cold enough for our bubbles to slowly freeze, but they did look very pretty on the snow. I love the way that they slowly crumple when they pop. 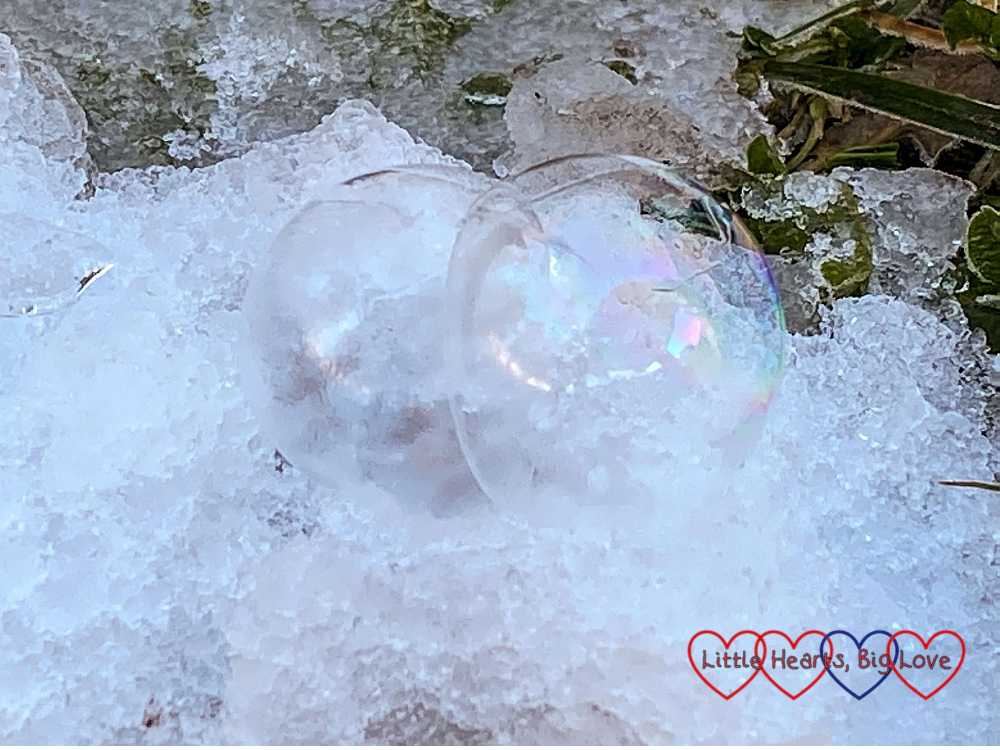 The snow only lasted for a day but we certainly made the most of it while we had it! Have you had snow this winter? What are your favourite things to do in the snow?

6 thoughts on “Making the most of the snow: seven snow-day activities”