I love seeing snow through my children’s eyes. To them snow is magical and fun and exciting. And as long as I don’t have to travel anywhere in it, I quite enjoy the rare occasions that we get snow. This week we’ve had snow for several days which is almost unheard of. It’s been lovely to watch my girls getting outside and having fun in the snow. 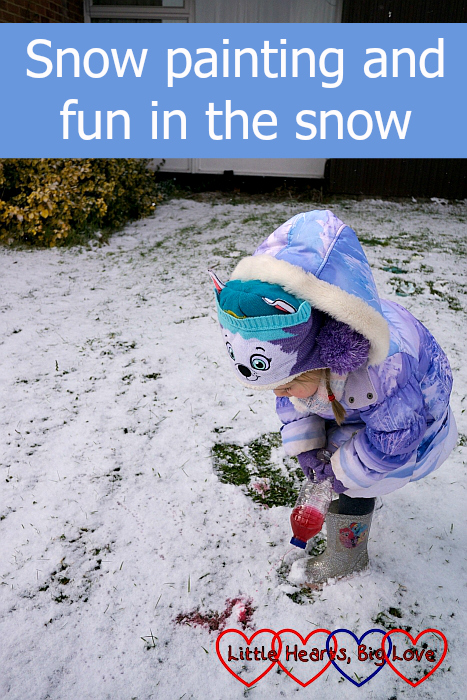 Normally, the first thing the girls want to do in the snow is to try and make a snowman. This snow is the wrong kind for making snowmen though. It’s something that I never really grasped before. Normally when we get snow, it’s fairly wet snow which is perfect for building snow. This week, because it’s been so cold, the snow is quite dry and powdery. 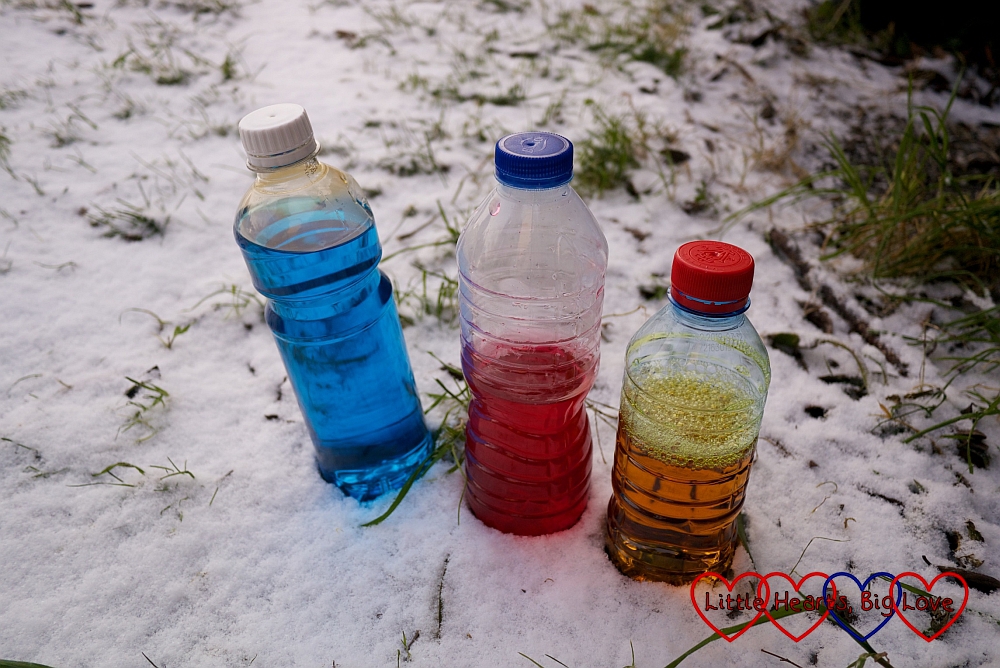 As we couldn’t build a snowman, I thought it would be fun to try some snow painting instead. I filled up some bottles with water and food colouring, made a hole in the lid using a corkscrew and then the girls were free to have fun. 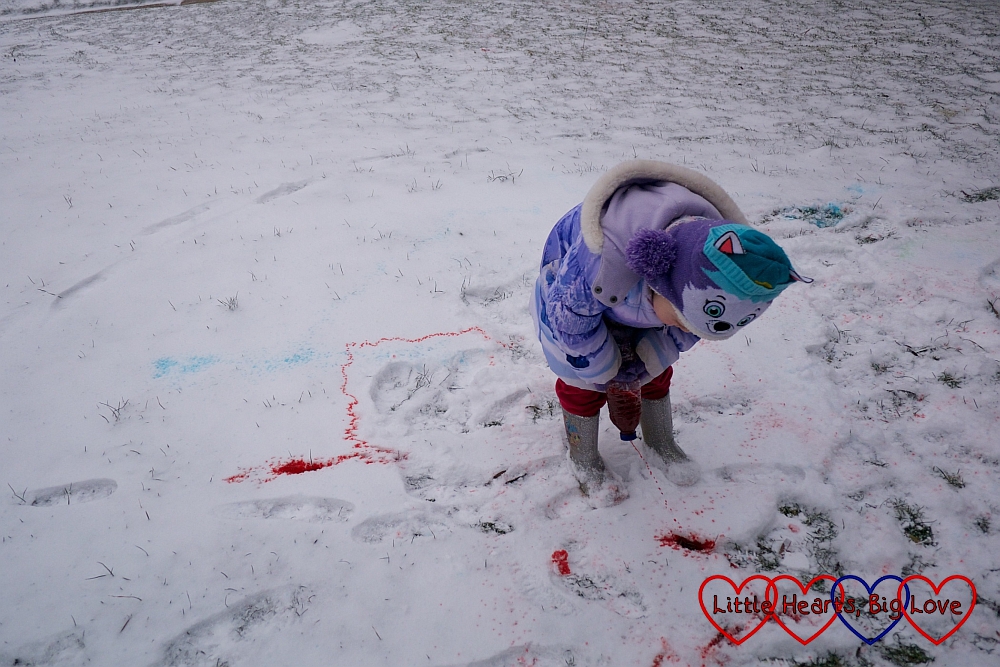 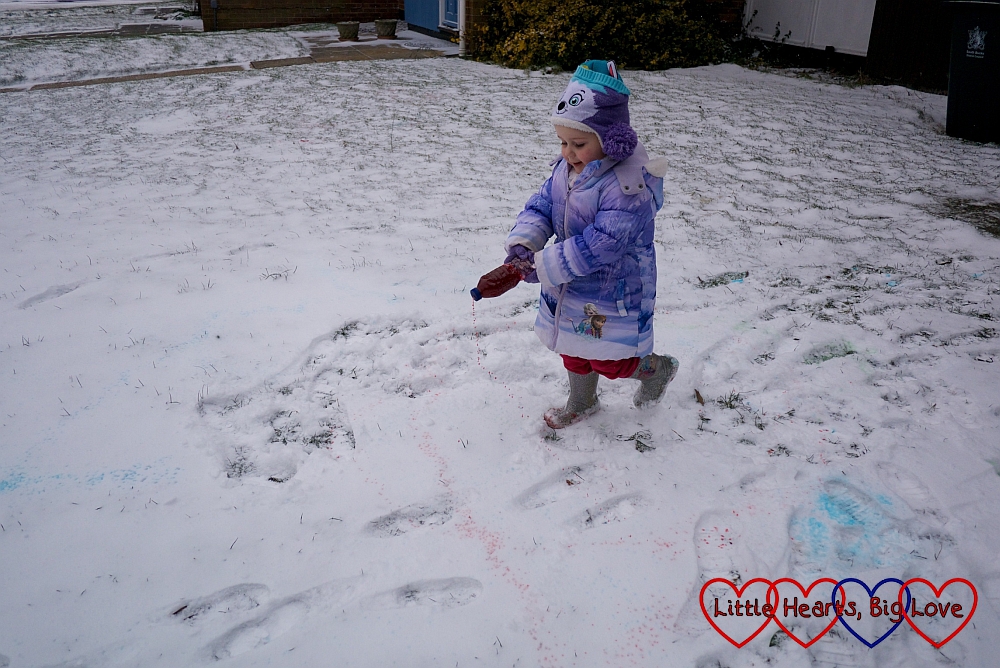 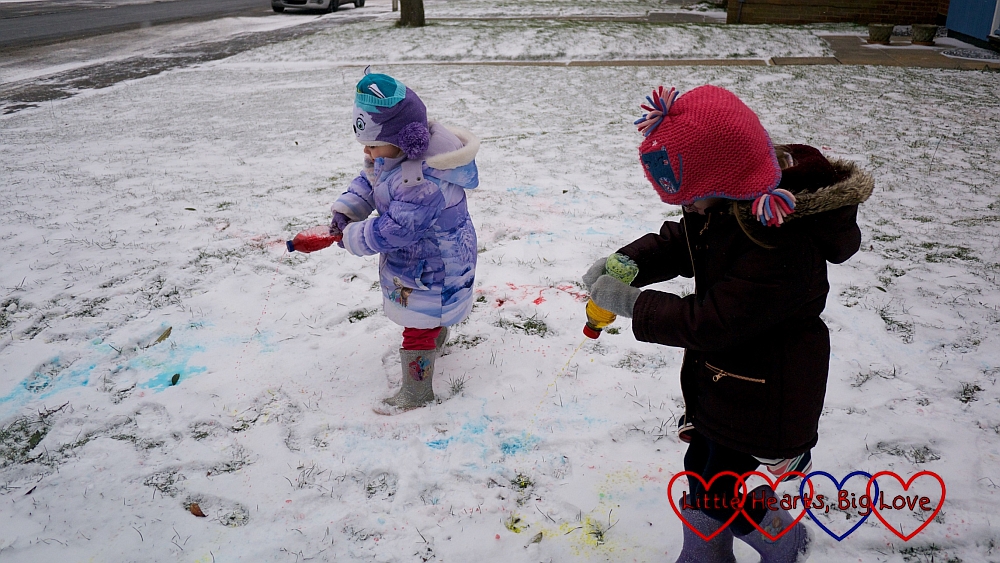 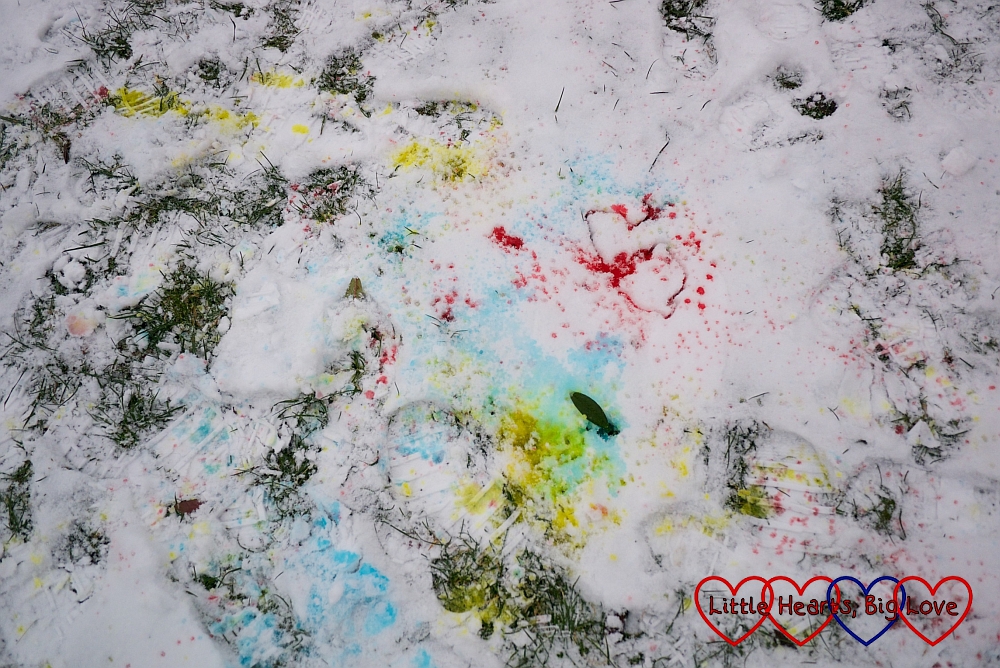 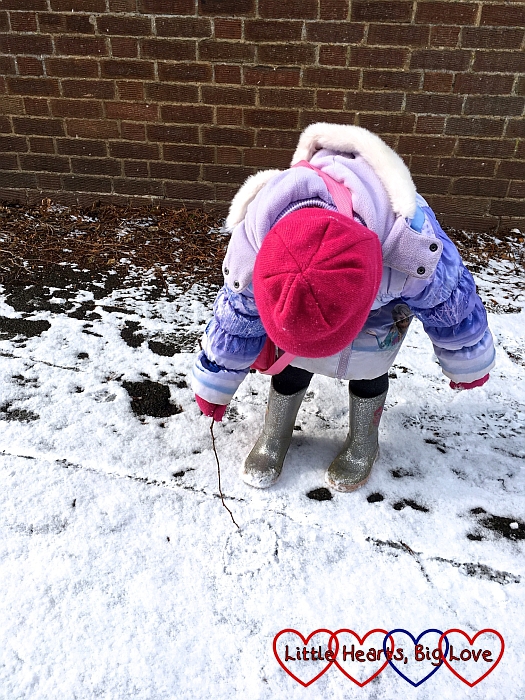 We’ve been trying to make the most of the snow over the few days it’s been here though – getting out for about 10-15 minutes at a time. The bottles have been refilled a few times for more snow painting. Sophie has also enjoyed drawing in the snow with a stick and Jessica had fun making snow angels. 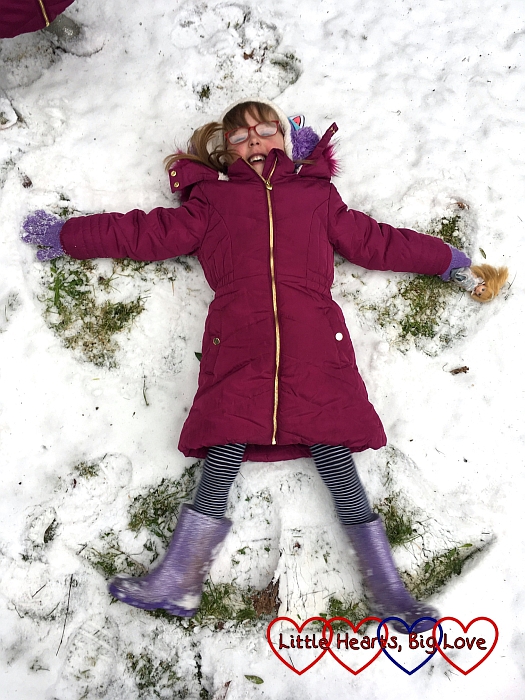 The snow might have been a bit too powdery for making good snowballs but it didn’t stop the girls trying to have a bit of a snowball fight! 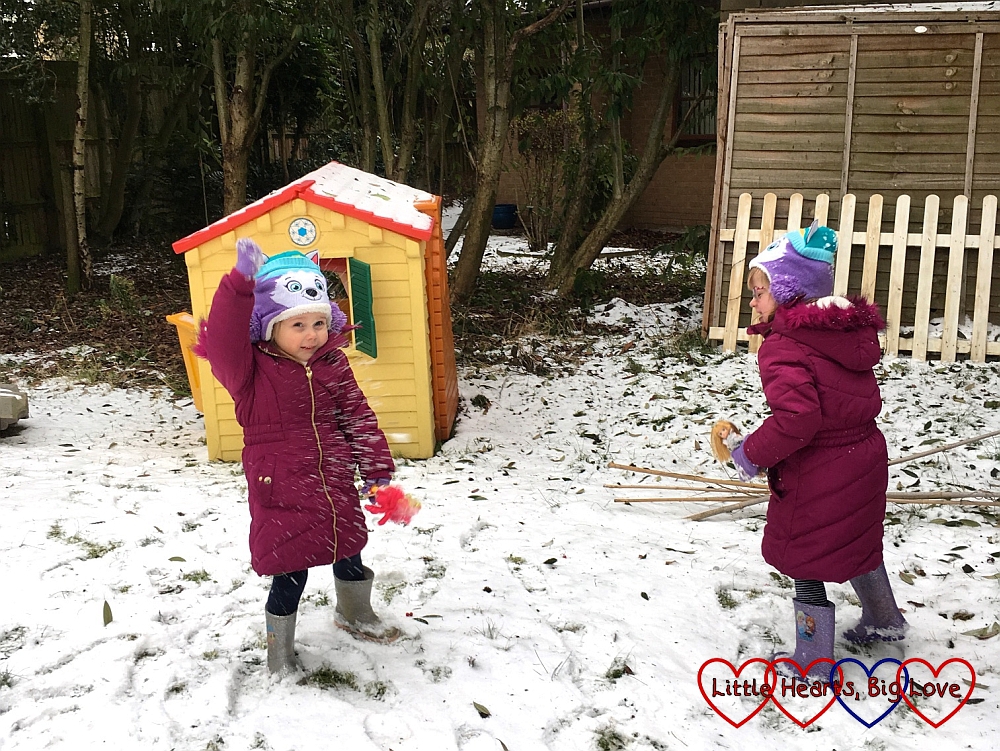 Last time we had some snow, I made “ice diamonds” by filling balloons with water and food colouring and putting them in the freezer. The girls loved them so much that I couldn’t resist leaving some out in the garden for them to find. 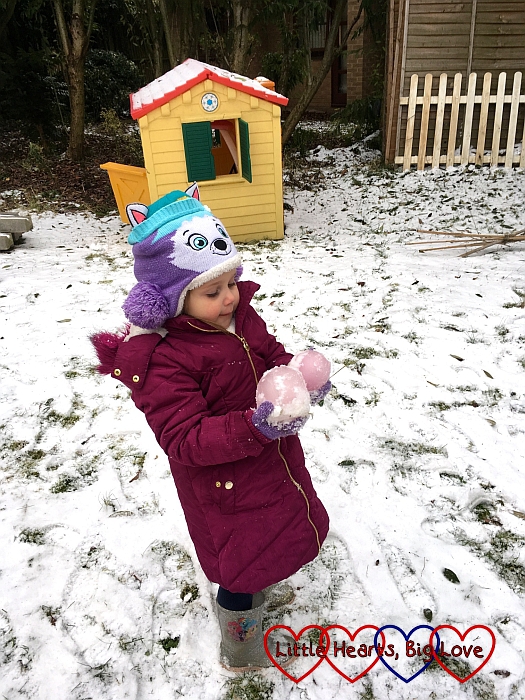 I’d read about snow ice-cream on Mum Turned Mom’s blog a while back and this week was the perfect opportunity to give it a try. I’d bought some condensed milk in preparation for this and left a couple of roasting trays out on the garden table one afternoon when it was snowing heavily to collect some fresh clean snow. I think I might have added too much condensed milk to my snow as it melted very quickly producing “ice cream soup” rather than ice cream but it was still very yummy with sprinkles on top. If I get another opportunity, I’ll be a little more sparing with the condensed milk. The girls enjoyed it anyway, even if it was a bit on the runny side! 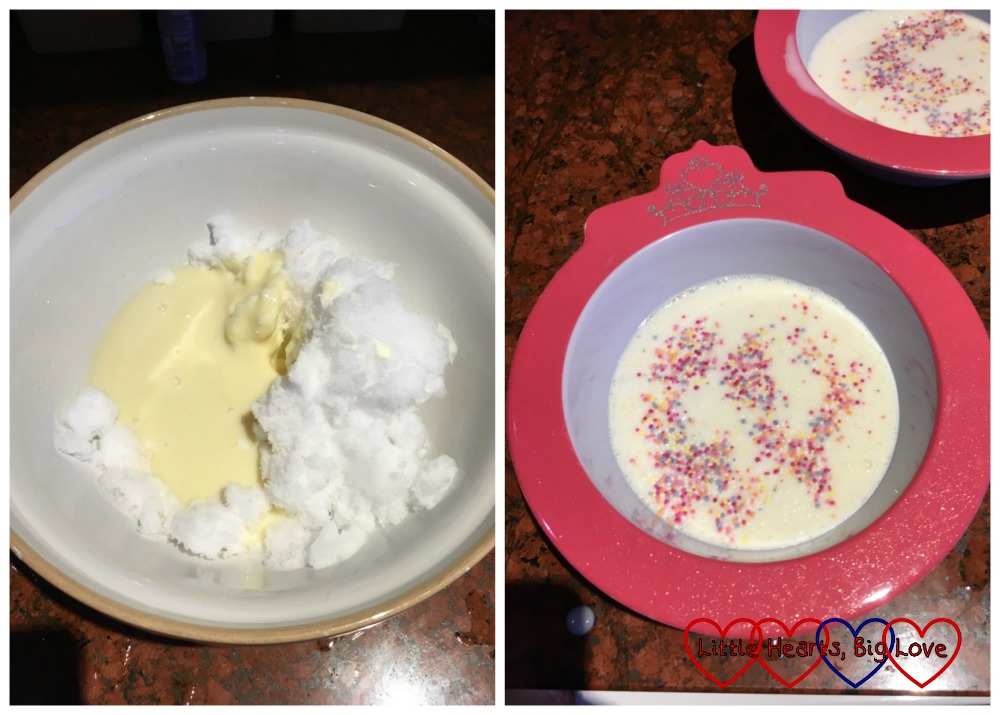 30 thoughts on “Snow painting and fun in the snow”