So much of what I read about child bereavement focuses on grieving mothers. I read things like “there is no pain greater than that of a grieving mother” and while I understand why people write that, it also makes me cross. The pain of a grieving mother is often acknowledged but what about the dads? My husband’s pain on losing our daughter is not a lesser pain than mine. He was her parent as much as I was. He had a wonderful bond with her and he would have died to protect her every bit as much as I would have. 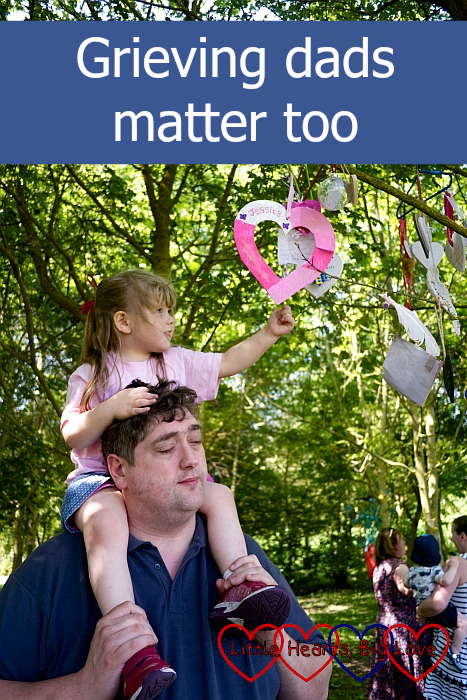 Jessica was in her daddy’s arms at the moment she suddenly collapsed. It was her daddy who was the last one of us to hold her as he carried her from our bed to the floor so I could start CPR. In that awful hour that followed, he felt as powerless as I did – perhaps more so because in those moments before the paramedics arrived, he was the one watching me try desperately to bring our little girl back.

I have many moments of asking myself if I failed Jessica; if there was anything more that I could have done to prevent her death. As her mother it was my job to look after her, to help her grow up and thrive, to keep her alive and well. Hubby has the same feelings. It was his job as her daddy to protect her and keep her safe. In those awful moments after she collapsed, neither of us were able to do what all our instincts told us we should be able to do – to keep our little girl safe and to protect her from harm.

I have seen the pride and love in my husband’s face when watching Jessica having fun or achieving something. I have seen his anxiety and fear during our days in hospital, waiting for surgery or watching Jessica recover in PICU. I saw his agony when the doctors told him there was no more that could be done to save her. I saw him take a deep breath at her funeral and hold his emotions together so he could pay tribute to the little girl we both adored. I have seen my own pain mirrored in his face a thousand times.

I am thankful that my husband is not one to bottle up his feelings; that he doesn’t feel like he has to be the strong one. He has always been a man for whom tears are not a sign of weakness, but just a natural expression of emotion. He gives his strength to his family by walking alongside them and by being there. Reminding us that we are a team rather than by pushing aside his own feelings. He misses our little girl every bit as much as I do.

For me, the daily reminders of her loss might be more constant. I am at home most of the day. I was the one who was lucky enough to have all the time with our girls. Just because hubby spent less time with them doesn’t mean he feels the loss less than I do. It still devastates him to come home at the end of the day and not hear Jessica’s excited cry of “Daddy! It’s Daddy! Hooray, Daddy’s home!”

Having to be away for work is harder for him now. I used to send daily photos of the little things the girls and I were doing. There will forever be a little girl missing from those photos. Not to mention that emptiness that hits him once more on his return home. The reminder that a little girl who used to count the sleeps until Daddy came home and be so overjoyed at his arrival home is no longer here to greet him.

We will both miss Jessica every single day for the rest of our lives. Our little girl was our world and she brought us so much joy. Losing Jessica affects my husband just as much as it affects me. The pain of being a grieving parent is incredibly hard to bear at times. We may feel that pain differently at different times. There are moments when the pain of loss hits hard and is as raw as it was at the start of this grief journey. Other moments are kinder but the ache is still there. Sometimes I comfort my husband; sometimes he comforts me and at other times we comfort each other. But our loss is still the same. We are both bereaved parents, missing a little girl who we loved more than life itself.

5 thoughts on “Grieving dads matter too”