I had a conversation with an acquaintance recently, triggered by a discussion about whether I was planning any more children. The conversation went something like this:

Her: “Well, two children is enough.”

Me: “No, not two really. Three. I don’t have one of each. I have two daughters and a son.” 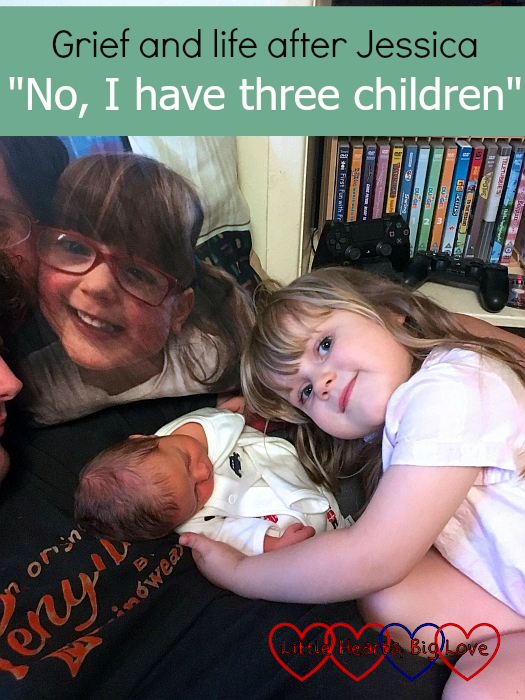 This is one of the hardest things about being a mother of three children with only two living. That constant battle to remind people that my eldest daughter existed. That she is still part of our family, and will always be part of our family.

I hate the fact that sometimes people “forget” about Jessica. That parenting my dead child means having to fight against her existence being erased.

With people who don’t know us well, or didn’t know us before Jessica died, it is perhaps understandable to some extent. I won’t deny Jessica’s existence though. I would rather pretend she hadn’t died when speaking to strangers than to ignore the fact that she lived.

Jessica lived. Her life had meaning; her life mattered. She was loved; she is still so very loved. She is as much my child in death as she was in life. Just because she is not here with me does not give you the right to erase her from our family unit.

I have three children. Not “two really”, not “one of each”.

I didn’t cease to be Jessica’s mummy when she took her final breath.

She didn’t cease to be part of our family when we laid her to rest.

Just because she is not physically here does not mean she is completely gone.

The fact that my daughter died does not mean she no longer “counts”. It is incredibly hurtful to suggest so and it makes me incredibly angry when I hear that.

It is right up there with “at least you have two others” or the implication that Thomas’s arrival has made up in any way for the loss of Jessica. As though having other children makes me miss the one I lost any less. Yes, my other two children give me a reason to keep going and give me a focus but that emptiness and longing for Jessica is still very much there.

She is my child every bit as much as her siblings are. That will never change.

I am a mother of three. Whether you perceive me to be so or not. My daughter existed. She was, is, and will always be my child. And I will fight for the rest of my life to make sure that her memory lives on.

16 thoughts on “Grief and life after Jessica: “No, I have three children.””