LEGOLAND Windsor has always been a favourite place to visit with my children. We used to go regularly in the days before Jessica started school thanks to having a preschool pass. There are plenty of things that younger children can enjoy there. We took Thomas for the first time shortly before his third birthday and he thoroughly enjoyed himself. We were limited to rides without height restrictions (and those Sophie could go on by herself) but we certainly packed plenty into our day out. Here are the things we enjoyed: 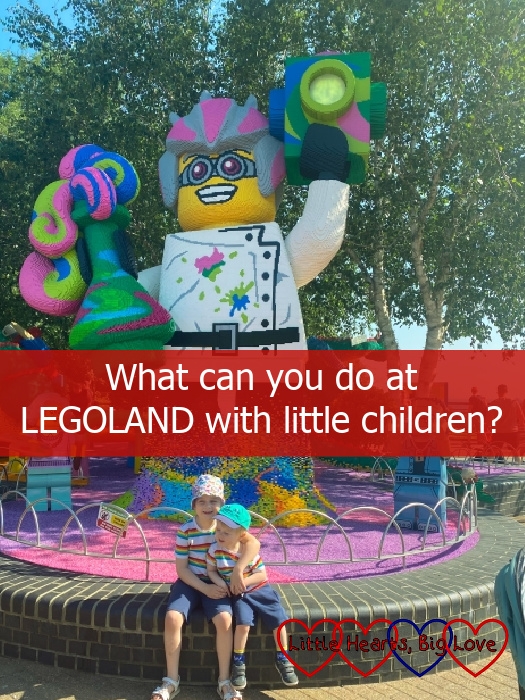 Fairy Tale Brook is a lovely gentle boat ride taking you around fairy tale scenes recreated in LEGO. There’s a tunnel towards the end where the genie from Aladdin makes an appearance. Sophie and Thomas both enjoyed the whole ride, but Jessica used to be a bit scared going through the tunnel. I’m not sure if it was because it was a bit darker or due to the genie’s booming voice saying “your wish is my command!” 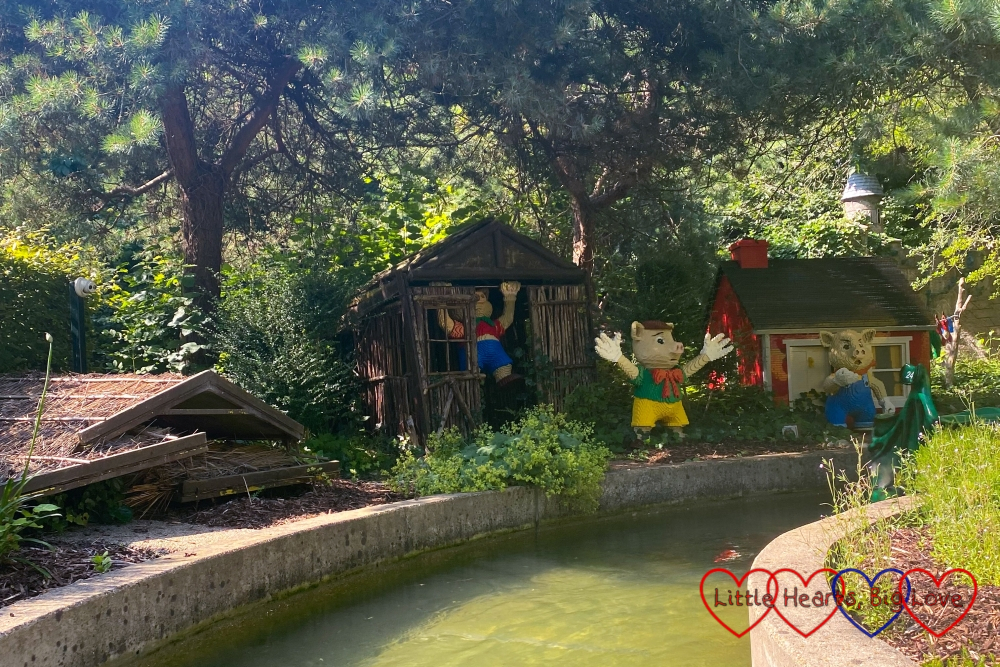 There’s a photo opportunity at the end of the ride. This is generally one of the quieter rides at LEGOLAND queue-wise. Most of the times we’ve been, the queue has been less than five minutes long.

The DUPLO Express is a lovely gentle train ride for little ones. Children under 0.9m need to be accompanied by an adult in one of the train carriages. Sophie is a bit big for this ride now but she enjoyed being able to sit at the front and “drive” the train. 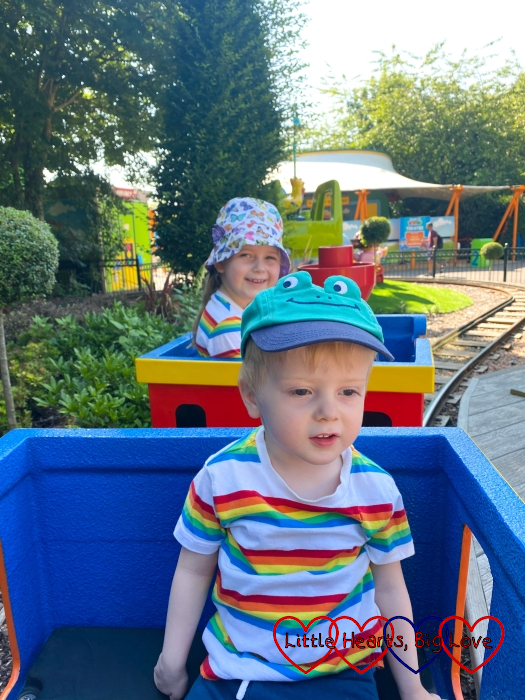 LEGO City Deep Sea Adventure takes you on a trip under the sea to discover a lost underwater city. The children loved watching sharks and other fish through the submarine windows. 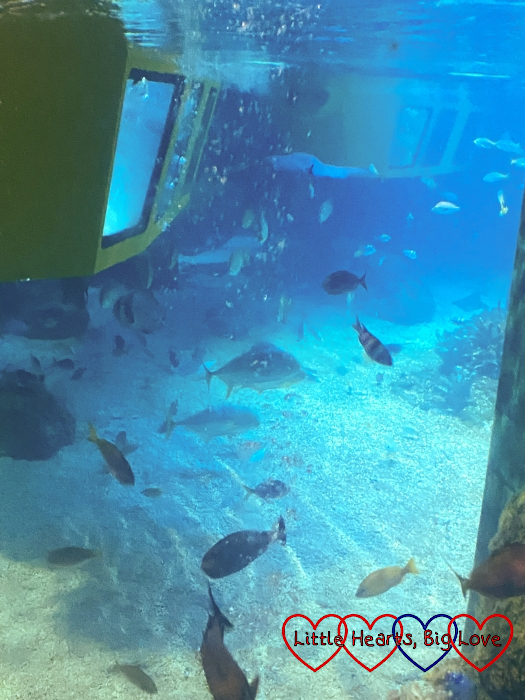 There’s a photo opportunity just before the ride where you pose in front of a green screen. I quite like these ones – they tend to be better quality photos than the ride ones. 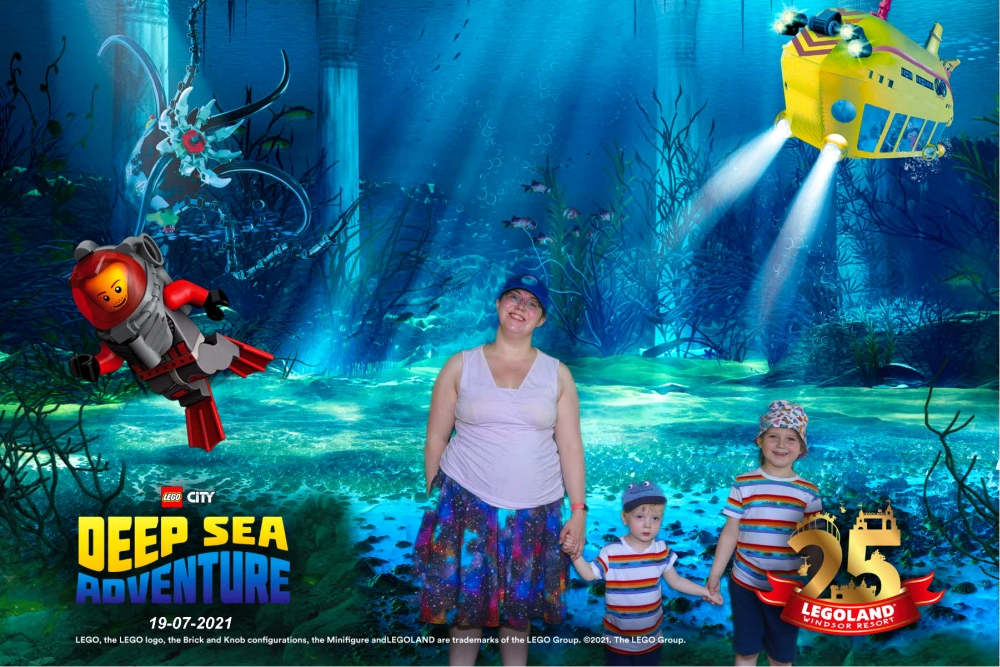 The LEGO Friends show was always a must-see on our days out with Jessica and Sophie, along with the photo opportunity afterwards. We saw it so many times and posed for so many photos with the “LEGO fairies” (as Jessica called them) that they recognised and remembered the girls each time we visited. It used to be a longer show when the LEGO Friends performed in the same space as the Pirates of Skeleton Bay show. This time we just saw the LEGO Friends performing one song in a small area near the LEGOLAND Express. I’m not sure if this is a longer-term change or due to Covid measures. 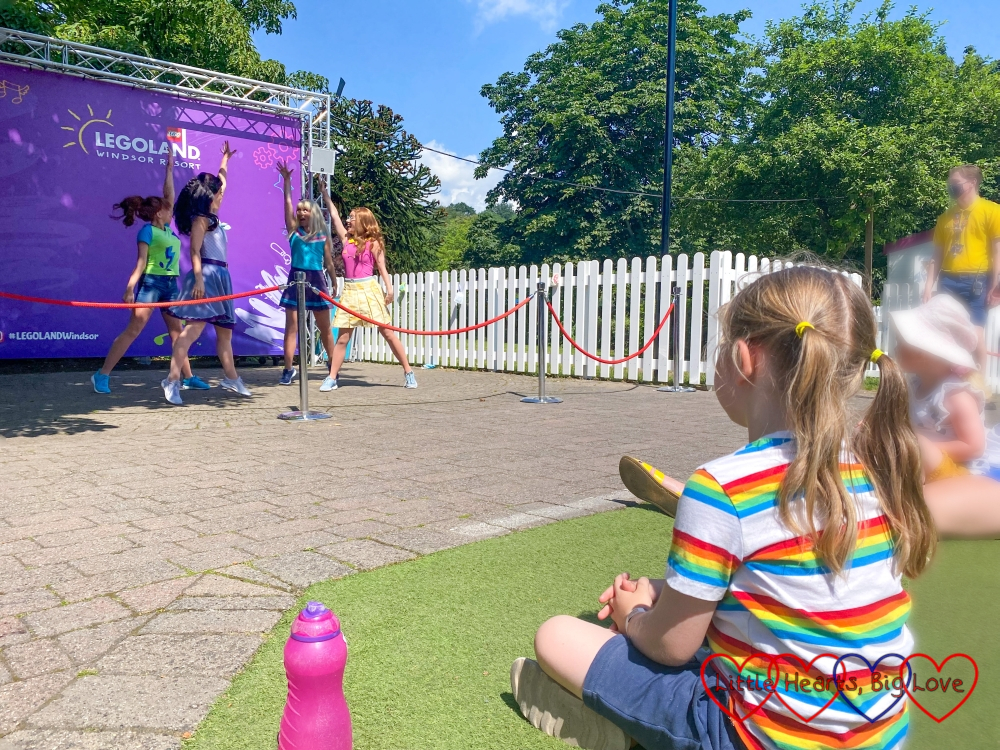 The puppet shows at the DUPLO Valley Theatre have always been a firm favourite with my girls. There were two shows available on the day we visited – ‘The Elves and the Shoemaker’ during the first part of the day and then ‘Cinderella’ later in the afternoon. It was a good place to stop for our picnic lunch while we waited for the next showing of ‘The Elves and the Shoemaker’ which both Sophie and Thomas enjoyed.

As it was a hot sunny day, I made sure I’d packed swimsuits so the children could splash around and cool down at Splash Safari. This is a fab splash area aimed at younger children featuring big DUPLO animals and lots of water features. Unsurprisingly this was one of the busier areas we encountered during the day but there was still plenty of space for Sophie and Thomas to splash about in. 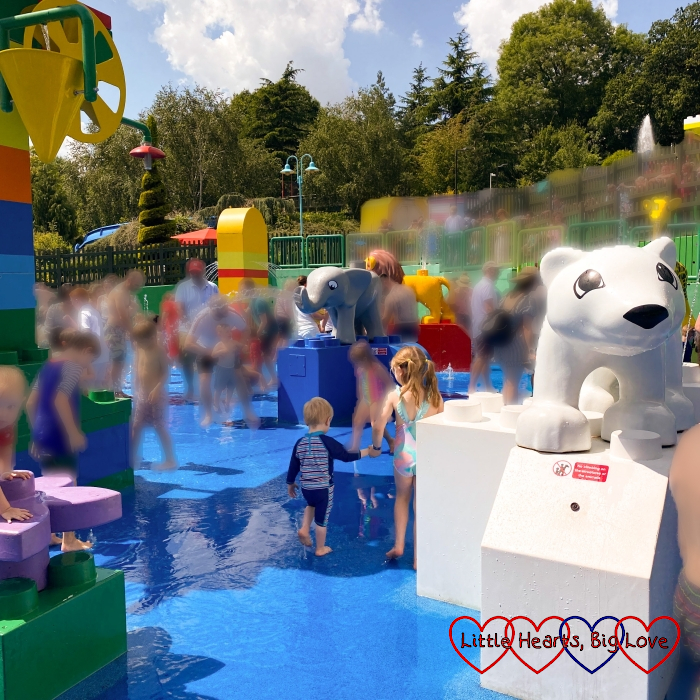 DUPLO Playtown is a children’s play area in the middle of DUPLO Valley. There is plenty for little ones to explore. Thomas particularly enjoyed the princess castle and the rocket play area (although I found it a bit unnerving not being able to see where he was inside the rocket structure). He loved the tunnel slides too although I had to steer him away from the open slide as the metal surface of this was very hot with the sun beating down on it. 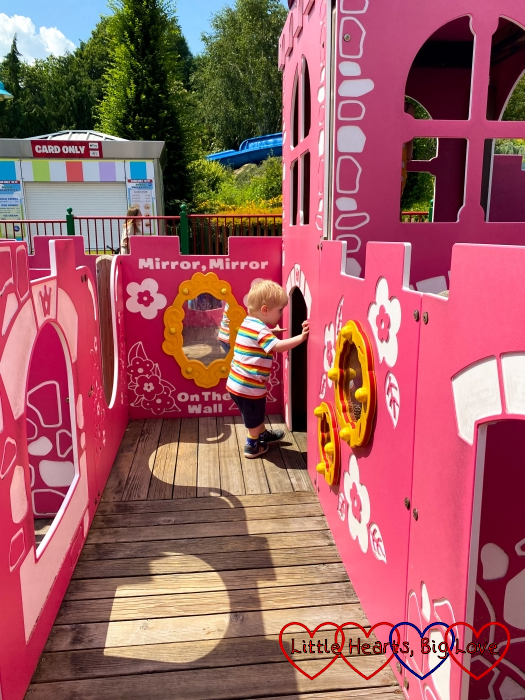 Sophie loved driving the boat at Coastguard HQ and managed to safely steer us past the LEGO elephants before they sprayed water at us! This is one of the busier rides and was our longest queue of the day at 50 minutes. Thankfully we’d stopped to buy some ice-cream just before joining the queue which helped to keep the children distracted from the long wait. 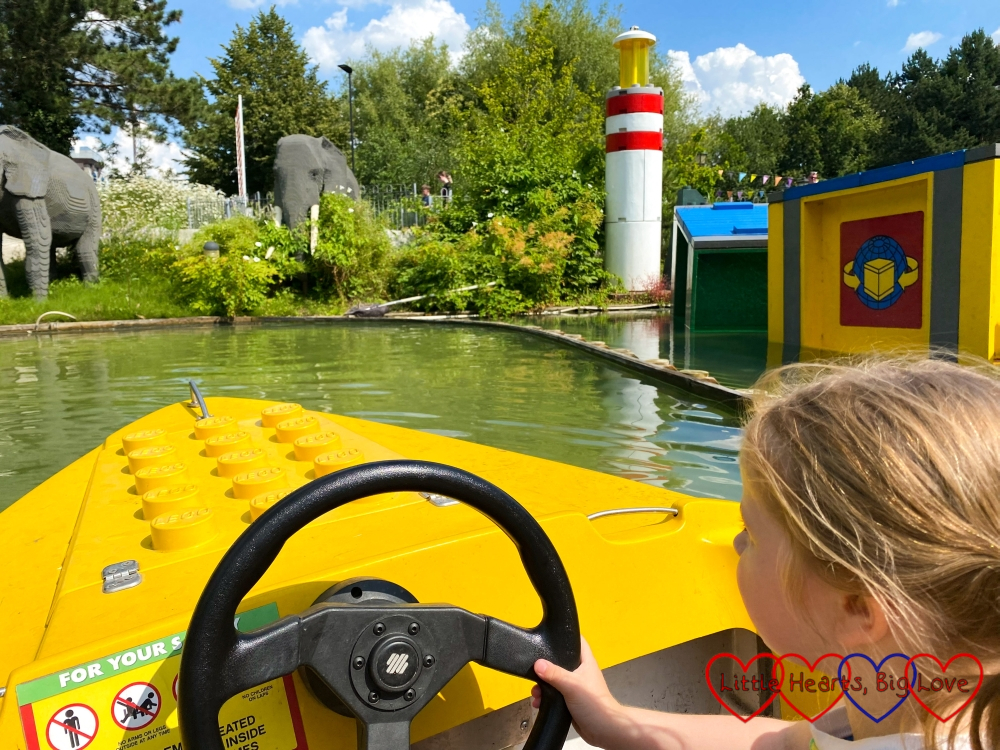 Aero Nomad is a gentle ferris-wheel style ride with six desert basket gondolas. Sophie loved getting a good view across the Pharoah’s Kingdom area of the park from the top of this ride. 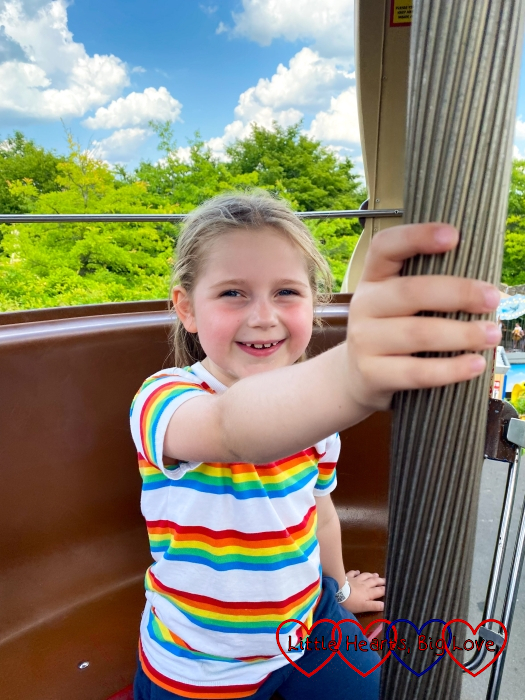 Laser Raiders is another popular ride with a longer queue time. This was our second-longest queue at 40 minutes. Sophie enjoyed being able to sit at the front of the car and shoot at the targets with the laser gun. I’m not sure Thomas quite grasped the idea but he seemed to enjoy the ride. None of us were particularly good at hitting the targets though! Laser Raiders is another ride with a photo point along the way. 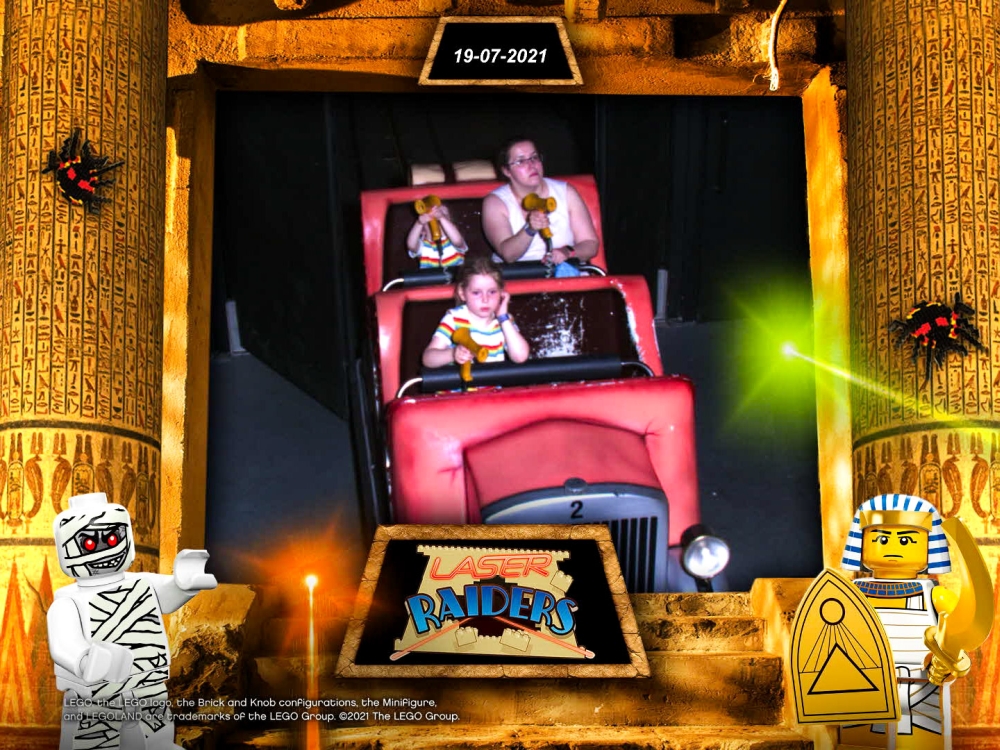 We always love looking around the various landmarks and scenes recreated in Miniland. The last time I went, a lot of the areas in Miniland were looking quite tired and in need of some TLC, but there have clearly been some improvements since then. Sophie is a big fan of watching Go Jetters on CBeebies so she loved spotting some of the landmarks she’s learned about from that. I love spotting the little details along the way and little topical additions to Miniland, such as the England men’s football team in front of Windsor Castle with a “Well done England” banner flying above them. 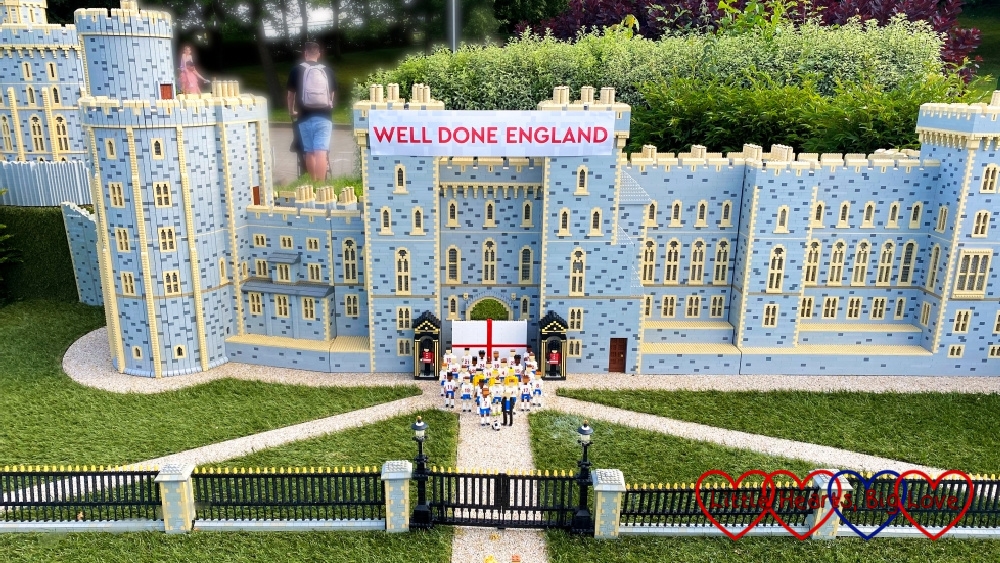 Thomas had a brief look around Miniland when we first arrived but had fallen asleep in his buggy by the time we revisited it later in the afternoon. While he was sleeping, Sophie got to enjoy a couple of rides on her own – riding the flying chairs on Thunder Blazer and getting her driving license at the LEGO City Driving School.

As you can see, we had a very full day out and there were still a few other attractions without height restrictions that we missed, such as Desert Chase, Balloon School, Castaway Camp and the Pirates of Skeleton Bay show. 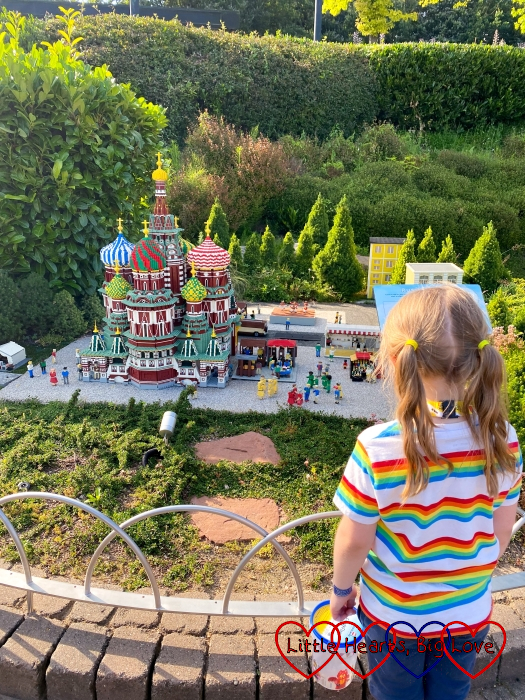 We visited after restrictions were relaxed. While social distancing and wearing face coverings were no longer mandatory, people were generally staying distanced in the queues and there were some people wearing face coverings in the queues in indoor areas. Hand sanitiser was also available at each of the rides. I had been a little anxious about visiting after the restrictions were relaxed, but on the whole it didn’t feel too crowded in most of the areas we visited and we kept mostly to outdoor attractions which felt safer.

We had a fun day out overall and Sophie and Thomas both thoroughly enjoyed themselves. As is often the case with days out like this, it was quite bittersweet for me. There were so many memories of days out with Jessica enjoying her “favourite LEGOLAND ever!” wherever we went. She would have loved being there with her brother and sister. It was nice to hear Sophie revisiting some of her memories of visits with her big sister though. 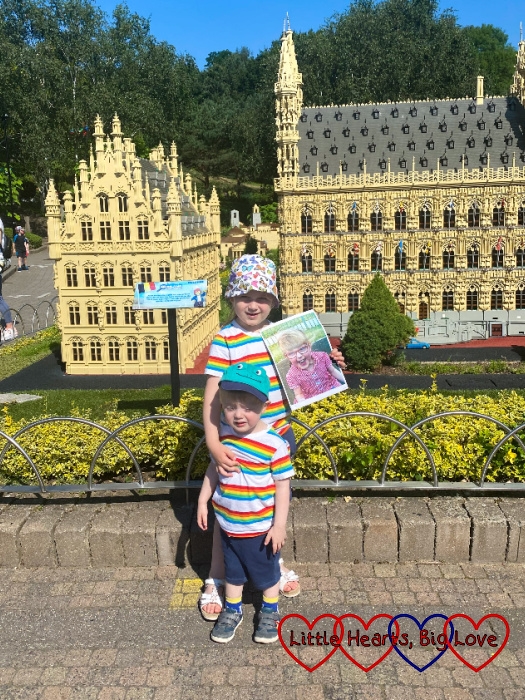 Visiting LEGOLAND – what you need to know:

Opening times vary throughout the year. Booking tickets online in advance is much cheaper than buying tickets at the gate, with online ticket prices starting at £29 per person. Standard parking costs £7 when booked online (£8 on the day).

On weekdays during term-time, you can buy a preschooler ticket online. This covers entry for a child aged 4 or under plus an accompanying adult for just £25.

Ticket prices and information are correct at the time of posting. For the latest information and prices, or to book tickets click here.

4 thoughts on “What can you do at LEGOLAND with little children?”