Most of the time our family life ticks along quite normally and then every so often, we hit a little bump which brings a realisation that what’s normal for us may not be that normal after all.  Yesterday morning was one of those times.  A phone call from school to say that Jessica was unwell and could I go and pick her up.  Unwell in this case translated as being blue and jittery.  When I got to school, Jessica was lying down on the floor in her classroom, wrapped in her coat to warm her up with the teaching assistant holding her hand and telling her a story, while watching her closely.  Jessica’s lips and cheeks were purple although thankfully she no longer appeared jittery.

It was one of those moments when I am truly thankful for living close to both the school and the doctors’ surgery.  Within a few minutes of me picking Jessica up from school, we were at the doctors’ surgery waiting to be seen.  Jessica’s colour had picked up by the time we saw the doctor, who listened to her chest, looked in her ears and throat and checked her sats. Jessica seemed well apart from having a cold.  It seemed that the likely cause of her going blue and jittery was due to her desaturating briefly as a result of running around while full of cold.  A reminder of how a cold can hit her hard at times.

Those few minutes in the GP surgery made me realise again how different our “normal” can be.  It was the slightly stunned reaction to Jessica’s normal oxygen saturation levels (sats) being around 80% that triggered the realisation this time.  I’ve become desensitised to how abnormal Jessica’s sats are. It’s only moments like this that make me aware of this and a whole host of other little things that are part of our normal. 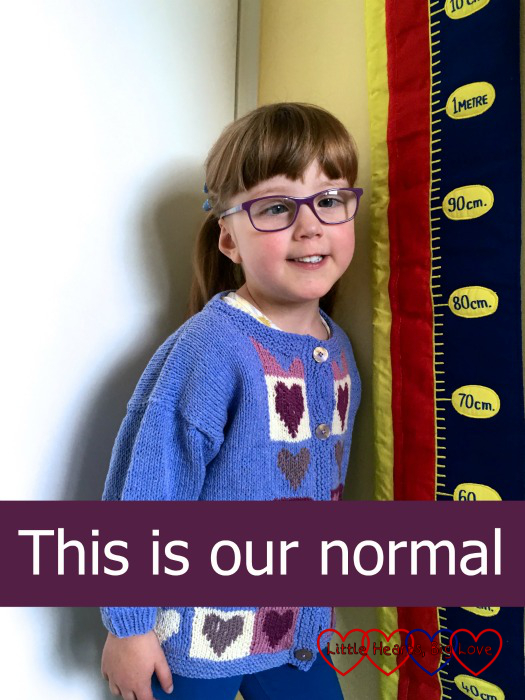 For us, normal is:

One of the hardest things for me with Jessica starting preschool, and then school, was having to trust someone else to keep a close eye.  I’ve had five years of this normal – I have a good idea of what is normal for Jessica, what is concerning and what I need to do about it.  It takes a lot of trust to hand that over to school and I’m thankful that so far, they seem to have reacted quickly to any concerns. What’s also important though is that, although the teachers might be keeping a closer eye on her, as far as Jessica’s day-to-day life at school is concerned, everything is completely normal.

29 thoughts on “This is our normal”