The Three Little Pigs is a story that has really captured Jessica’s imagination at the moment and so this game seemed perfect for her. As soon as Jessica spotted the ‘piggies’ on the front, she got quite excited and while Sophie had her afternoon nap, we sat down to play together. 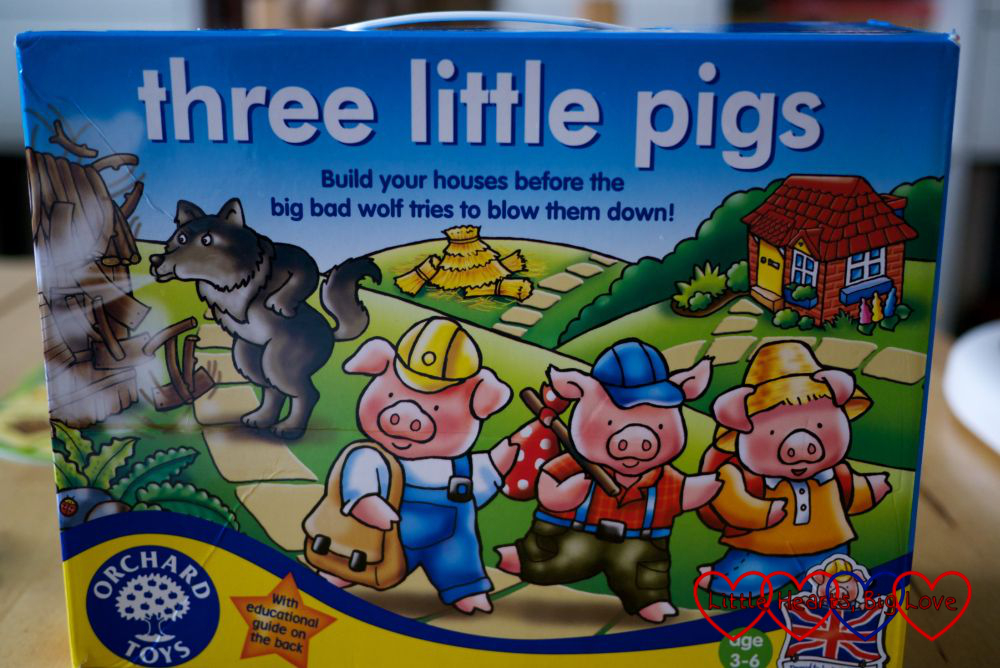 The pieces for the board are shaped like jigsaw pieces and Jessica enjoyed putting this together while I read the instructions on how to play the game. Each player has a three little pigs counter and works their way around the board, trying to build three houses made from straw, sticks and bricks without the big bad wolf blowing their houses down. Once the three houses are complete, the player needs to head to the middle of the board and reach the safety of the brick house in order to win the game. 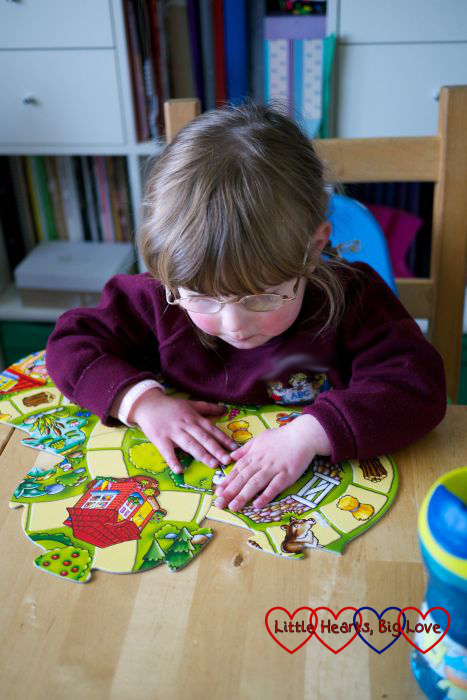 I found the three little pigs counters a little hard to slot into the plastic stands without damaging the pictures on them but otherwise setting up the board and house pieces ready for play was straightforward. Jessica chose a red counter for herself and a blue one for Mummy and we started the game. 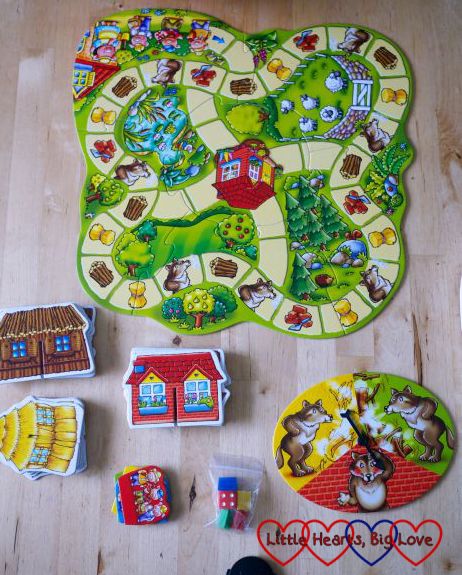 It’s the first time we’d played a board game together at home but I think Jessica may have played games using dice at preschool as she grasped the concept of throwing the die and counting the spots with very little help from me. She needed a little help with moving her counter as tended to count the space she was already on as 1 and was also more likely to just head for whichever space she wanted to be on next rather than the one she was due to land on! 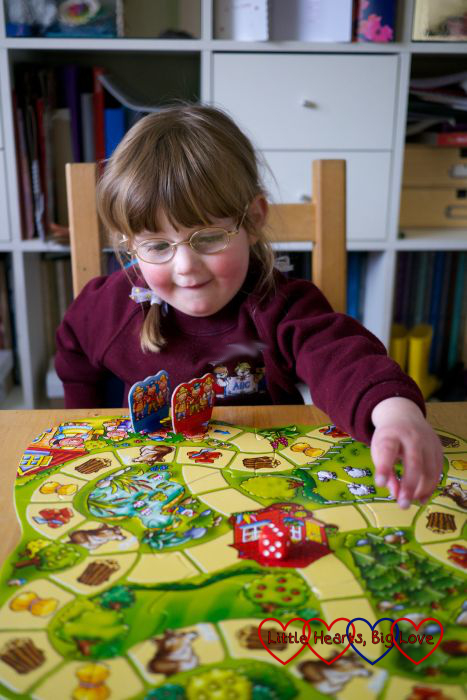 Each of the three houses is formed from slotting two pieces together. Each piece is collected from landing on a square showing the building materials for the house (straw, wood or bricks). If the player lands on the big bad wolf, they have to spin the wolf spinner (which Jessica loved doing) whilst saying “I’ll huff and I’ll puff and I’ll blow your house down!”. If the spinner lands on a straw or wood house, then the player can take a house piece of that type from another player. If it lands on the brick house, the wolf can’t blow it down and the game continues. 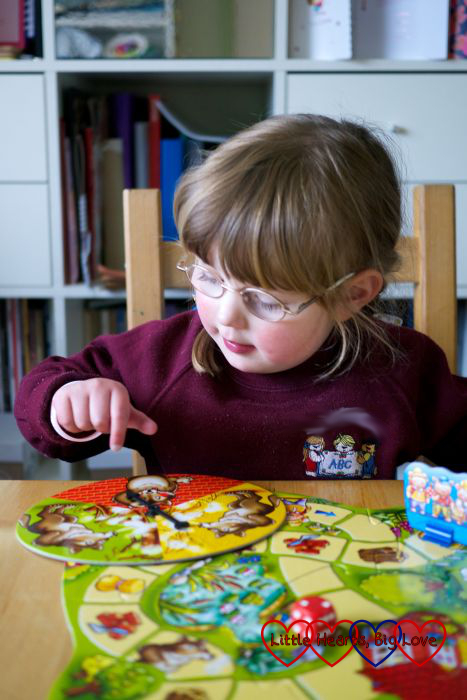 Once the houses are complete, the player needs to head to the middle of the board, throwing the exact number to get to the brick house in the centre. The first time we played the game, Jessica threw the correct number on her first go after completing the houses but the second time she just threw the die and decided that she would just go straight to the brick house anyway! 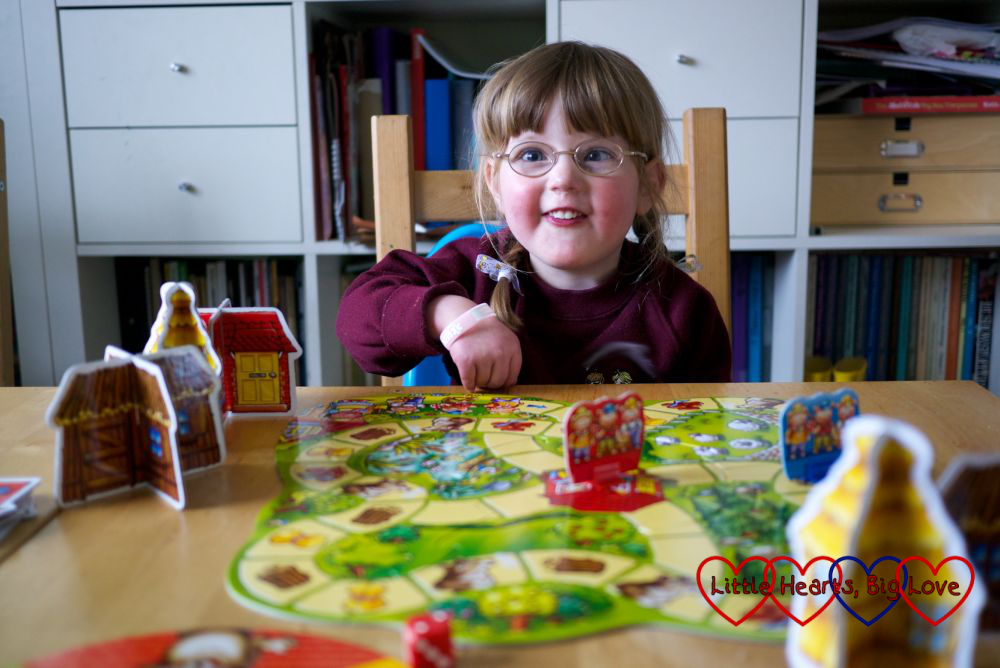 The game is aimed at 3-6 year olds and is for up to four players. Jessica, at 3.5 years old, had no problem understanding the gist of the game and how to move around the board and build the houses even if the specific details of how to win were a bit lost! It’s certainly something we’ll be playing again and again. 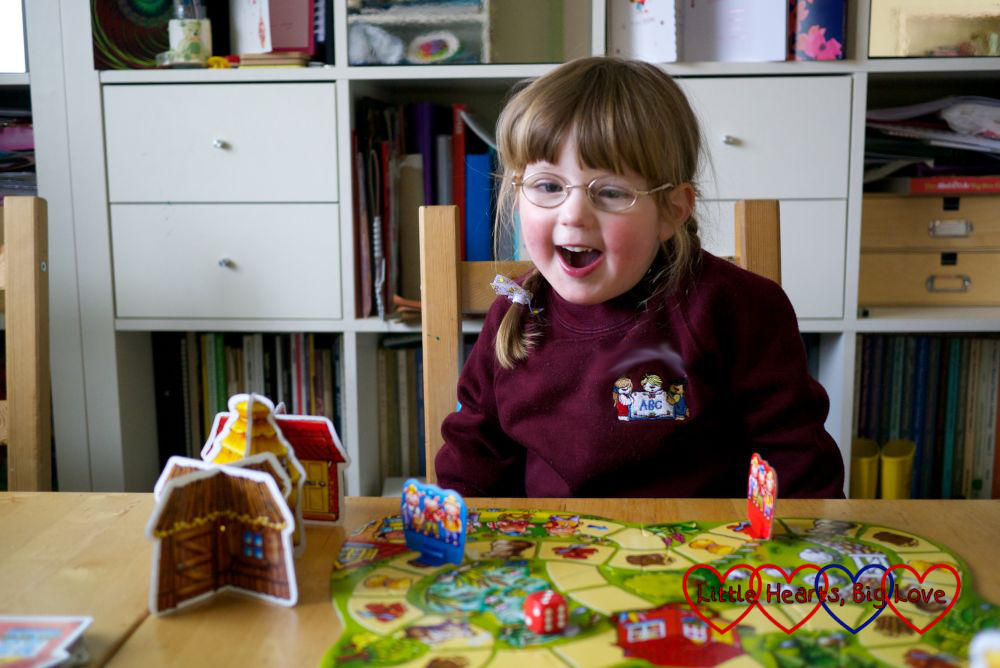 The Three Little Pigs game is available from Orchard Toys at £11.75. There are also a few other board games on their website which are based on children’s stories and so I suspect we’ll be creating a collection of board games later on as we introduce Jessica to more of the stories!

We received this game as a present for Jessica from one of her godparents. I have not been compensated for writing this review. All thoughts and opinions are my own.

20 thoughts on “Review: The Three Little Pigs board game”