We’ve been preparing a little more for Peanut’s imminent arrival over the last couple of weeks. There’s now space in our bedroom for the Moses basket and we’ve been busy decluttering the spare room ready to turn it into Sophie’s new bedroom. The carpet is due to arrive at the end of this week which has forced us to clear all the clutter out. I’m still not sure I feel quite ready yet for Peanut to arrival but at least I’m feeling more prepared now. 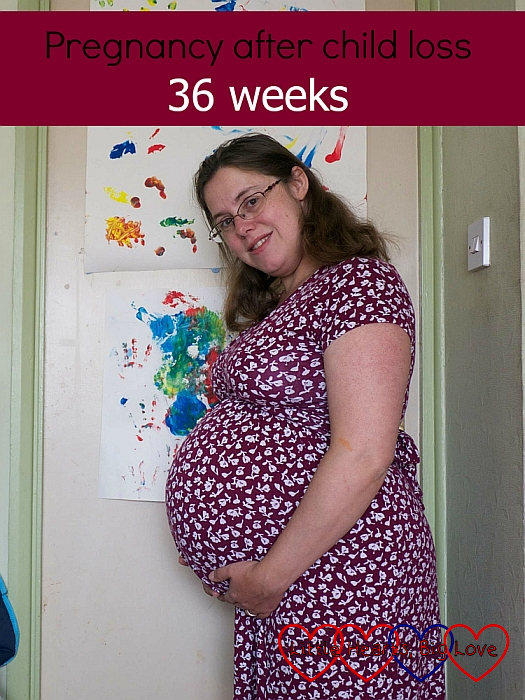 I had such a lovely moment last week when I felt a big rush of love for Peanut for the first time since Jessica died. It was in the middle of the night – hubby was asleep with his hand resting on my bump and Peanut was having a wriggle. I could hear Sophie’s breathing as she slept in her bed and every time she moved, there was a little rustle from the doll she had taken to bed with her. It sounded so much like the noise Jessica’s doll Kerry would make if Jessica moved in her sleep and for a moment it felt like all three of my children were right there with me and I felt so connected to all of them. It made me realise that Peanut’s arrival doesn’t take anything from Jessica’s place in our family – she will always be there with us.

That lovely moment has helped me get through what has been a tough couple of weeks on the emotional front. We’ve had various hospital appointments relating to all three children – Sophie broke her wrist; we met with the consultant who looked after Jessica in A&E on the night she died to discuss the events of that night; and we’ve had quite a few antenatal appointments for various reasons.

I’ve been having a lot of Braxton Hicks contractions over the last few days, some of which have felt quite strong at times. I remember this from the last few weeks of my pregnancy with Sophie – there were quite a few times when I wondered whether or not I was going into labour due to the frequent Braxton Hicks.

My feet are still very puffy and can feel quite uncomfortable at times. I’ve found the puffiness quite frustrating – I have one pair of sandals with velcro straps that fit but the velcro keeps popping open every few steps because my feet are so swollen. I ended up having to buy a pair of flip-flops several sizes bigger than my usual size just to be able to find some kind of footwear that was wearable!

I’m definitely feeling much slower and heavier now – it feels like quite an effort to get up if I’ve been playing on the floor with Sophie or sitting on the floor next to her bed at night.

I feel like I’ve grown quite a bit over the last couple of weeks although bump-wise it still feels closer in size to when I was pregnant with Jessica.

Peanut is still breech at the moment. I’ve had another growth scan which shows that Peanut is growing well – still a little smaller than average but following the growth curve nicely. We were referred to the breech clinic for a discussion about trying to turn Peanut and have an appointment later this week for an ECV. In the meantime, I’ve had some moxibustion to try and help encourage Peanut to turn. Hubby has been continuing with this over the last few days although so far Peanut seems to be quite comfortable in the breech position. 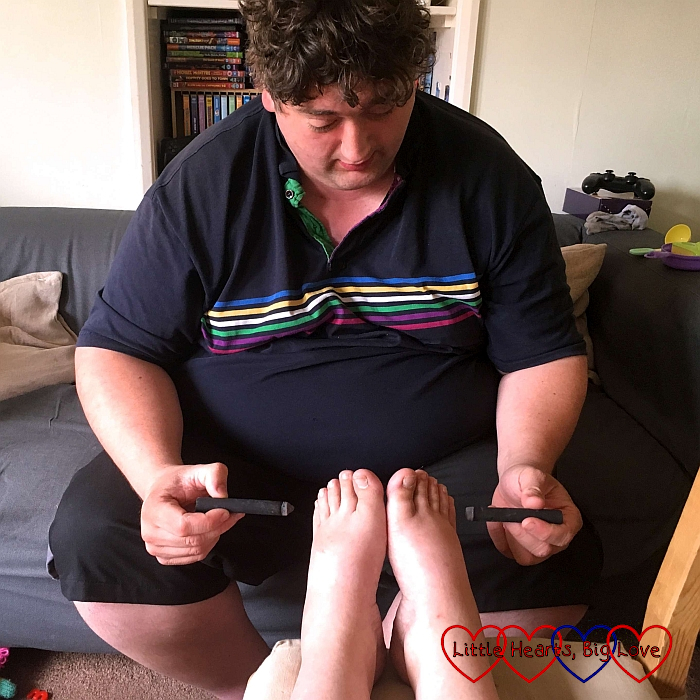 I’ve had a couple of appointments with my independent midwives and the birth box is ready in the garage should I choose to stay at home. I’ve also packed my hospital bag though – still keeping my options open at the moment!

Peanut is still lovely and wriggly – especially during the moxibustion sessions. Now if I can just get him or her to wriggle all the way round and go head down that would be perfect!

At the moment, I feel a little bit in limbo as my birth plans depend on whether or not Peanut is going to turn. One of my friends has given me her birth pool. I need to get a liner for it but I’m holding off until after the ECV. If Peanut turns head-down then hopefully I’ll have a home waterbirth as I did with Sophie. If not, then I need to consider my options for a breech birth. I still keep hoping that we can get Peanut to turn though!