Placentaphagy – the act of eating one’s own placenta (or their baby’s placenta depending on who you assign ownership to) has been in the news lately after Colleen Rooney tweeted a picture of the capsules made from her son Kit’s placenta. Eating a placenta is something that many people would consider to be quite revolting, so why would you do it? Here are some of the reasons why I chose to consume my baby’s placenta after giving birth: 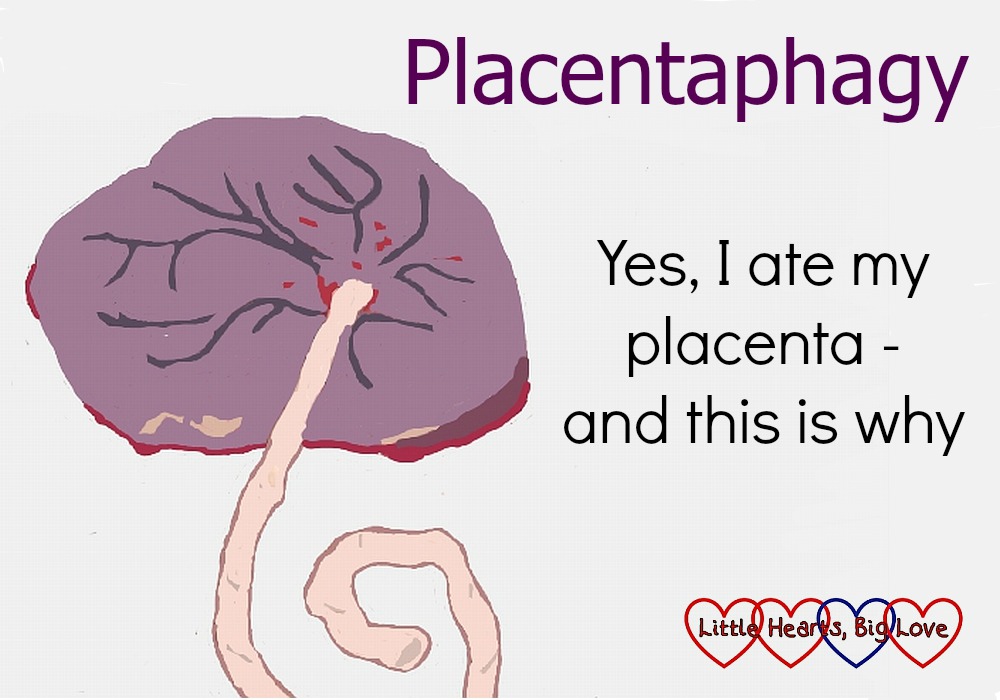 I’ll hold my hands up – this was the main reason I did it. I knew it wasn’t unsafe to eat and I was curious to know what it might taste like. I quite enjoy steak tartare and order my steak blue so the prospect of eating raw placenta wasn’t particularly off-putting. I’d been an independent midwife before I had children and had encountered a couple of women who had consumed their placenta raw in a smoothie. I decided to do the same (the recipe is at the end of this post if anyone is interested!). I have to admit, it tasted pretty much like a normal smoothie. It was a bit thicker perhaps but I really couldn’t taste the placenta at all.

Placenta contains high levels of corticotrophin-releasing hormone, which is known to reduce stress. The scientific evidence for placentaphagy reducing the risk of postnatal depression is inconclusive. However three-quarters of women interviewed in one study did report improved mood after eating their placenta.

In my case, eating my placenta didn’t stop me getting postnatal depression though.

There is some thought that eating the placenta helps to replenish nutrients lost during childbirth. Again, there is very little evidence to support this. Whilst I was less tired after Sophie’s birth than I was after Jessica’s (when I didn’t eat my placenta) there were other factors that would have affected this. I rested in bed for a week after Sophie’s birth instead of spending hours by the side of an intensive care cot. I also didn’t have the worry and stress of having a baby critically ill in intensive care having had open-heart surgery second time around.

Some women have reported increased lactation after eating their placenta. My milk supply was better second time around. However, there were so many other differences that it’s almost impossible to say whether eating my placenta had any impact on this.

Whilst placentaphagy is rare in humans, it is very common amongst non-human primates and other mammals. There is evidence of the benefits of placetaphagy in animals, such as increased interaction between mother and baby; analgesic effects; opiod effects which facilitate care-taking behaviour and a suppression of pseudopregnancy (fake pregnancy) in the postnatal period. Whether any of these benefits also apply to human mothers eating their placentas is unknown.

If you are interested in consuming your own placenta, there are a few ways you can do it:

The Independent Placenta Encapsulation Network website has more information about how to store placenta for encapsulation plus more information on ways to eat placenta. If you are planning to eat your placenta raw, it should be eaten sooner rather than later as it can only be kept in the fridge for 3 days. I had originally intended to eat my placenta after Jessica’s birth. However, as we ended up spending four weeks in hospital, there was no opportunity to do so. I did have a lovely friend though who kindly stored the placenta in her freezer though. We took it home and buried it in the garden instead (which we also did with what was left from Sophie’s). We bought the girls a namesake rose each which was then planted over their placentas.

If you are tempted to try a placenta smoothie, here is the recipe that I used:

Place all in a blender and whizz up!

27 thoughts on “Placentaphagy – yes, I ate my placenta and this is why”