“I’m just a mummy”. Four words that can slip all too easily off the tongue. Four slightly apologetic words. Four words that diminish that all-important role of raising your child. Why is it that being a mummy is so often seen as such a negative thing? Being tutted at as you try to manoeuvre a buggy through a narrow aisle in a shop or getting frosty looks when eating out with small children because for some reason they haven’t learned that they should be seen and not heard – there are times when being a mummy can feel very much like you are a second-class citizen.

Becoming a mummy is an amazing experience. I still remember the euphoria I felt after giving birth to my first child.  The sense of wonder and awe that I had grown this beautiful little person, birthed her and was her mummy. It felt like the world’s greatest achievement. I was wasn’t just a mummy, I was a superwoman. 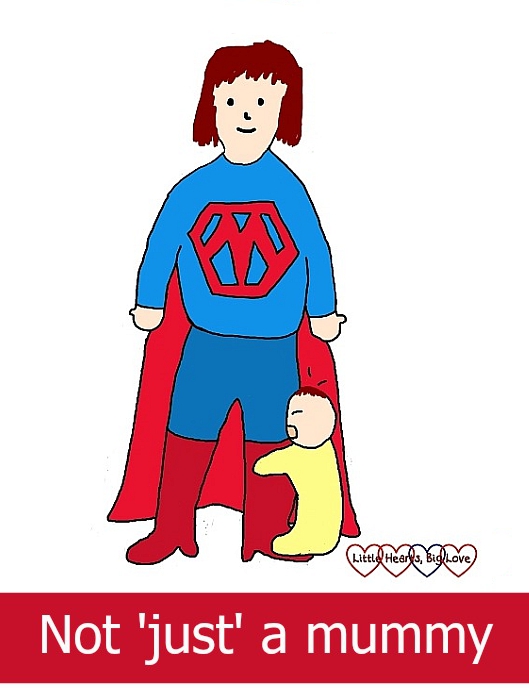 And yet somehow as the challenges of motherhood took their toll, that feeling of awesomeness slipped away and was replaced by a feeling of inadequacy. I wasn’t a superwoman anymore, I was just exhausted, getting through the days as best I could. I became “just a mummy”, doubting whether I was even doing a good enough job.

Inadequacy is a feeling many of us struggle with. Being a mummy is hard work – the most rewarding work in the world, but incredibly exhausting and challenging. The isolation of being a stay-at-home mum – “just a mummy” – with the implication that you are not making enough of a contribution to society; the guilt that comes with being a working mum – guilt for not always being able to be there for your children enough and guilt for letting the side down at work when a sick child means having to take a day off. Whether we stay at home or go to work though, we are all mothers, doing the best we can.

Motherhood is a joy and a privilege. It is overwhelming, exhausting and sometimes intensely painful. It is beautiful and terrifying, requiring strength, sacrifice and more love than you ever dreamed possible. Bringing up a little one is the most important job in the world. A job with demanding bosses, long hours and very little thanks, paid in love, hugs and sticky kisses. A job that requires us to be more than we thought we could be.

I am more than just a mummy. I am a cook, cleaner, teacher, referee, mediator, taxi driver, magician and children’s entertainer all rolled in to one. I keep track of the family calendar, juggling appointments, playdates and other important events in my head. I am constantly multi-tasking, making one pair of hands do the work of several. I can detect a full nappy at twenty paces, stop a toddler whine in its tracks with a single look (sometimes!) and stop tears with just a kiss.  In my children’s eyes I am the best thing since sliced bread, the one who can make everything better just by being there.  I am not perfect, nor do I need to be. As long as my children are fed and clothed, loved and happy, I’m doing a good job.

I’m not just a mummy. I’m a Supermummy and so are you.