​​I suppose there was once a time when going for a scan was exciting. When it was an opportunity to see my baby again, something to look forward to. I don’t really remember that though. The first scan with Jessica wasn’t exciting. It was an early scan due to a first trimester bleed. A scan where I prayed that I would be reassured that my baby was still there, still growing, had a heartbeat. A scan that I was anxious about. Thankfully it was a reassuring one.

The private scan I’d booked two weeks later was an exciting one I think. Our baby was still a secret between me and hubby and he was going to see it on scan for the first time. I’d been reassured by the earlier scan and don’t remember feeling anxious about it at all.

With the 12 and 20-week scans, I might have been excited, but I was also slightly nervous. Being a midwife at the time meant I knew too much. I knew that scans were to check that the baby was developing normally. They were there to look for concerns, rather than being an opportunity just to see the baby. 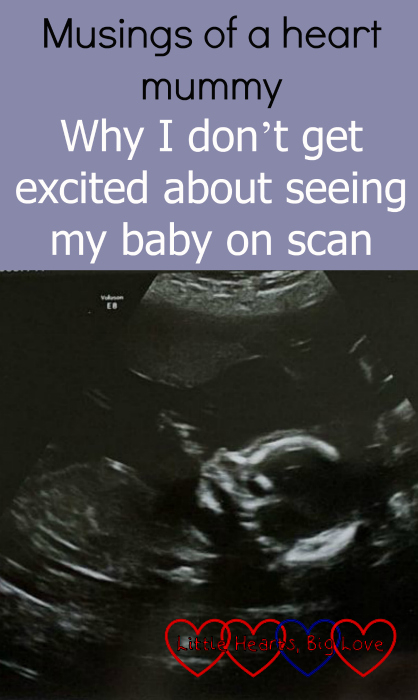 The 20-week scan changed us forever. I will never forget that moment of being told that our baby had a complex heart condition. A moment when our world came crashing down around us. I remember the shock, the fear, the thought that our baby could die. There were many scans from them on. With each one we prayed for encouraging news. Some of them gave us hope; at others the prognosis seemed to worsen.

Ever since then, I get anxious about going for scans. Being in the room where that 20-week scan brings those memories flooding back. I am acutely aware of the sonographer’s tone of voice, of silences, of how many times they measure something. Fearful that I will be told once again that something is wrong.

The thought of going for a scan alone fills me with dread. This week we had a fetal cardiac scan for Peanut. Hubby could not come with me and I wasn’t able to move the appointment. I didn’t want to go alone. I had kind friends and family members who would have come with me if they were able to do so. And yet, as thankful as I was for their kindness in considering whether they could come, I would have declined any offers to do so.

It might seem strange that I would prefer to face something I dread alone rather than accept support. However, having support at a scan has to be the right support, for the following reasons:

1) It feels a bit too intimate

Going for a scan feels like quite a intimate thing to me. I’m exposing part of my body and someone is looking closely at the inside of my unborn baby. Other than the necessary healthcare professionals, it just doesn’t feel quite right to have someone other than my hubby, or perhaps my mum, there for that kind of moment.

2) Having to manage my own response

If I receive bad news, I don’t want to feel like I have to put on a brave face. I don’t want to have to hold back my own response because I don’t feel comfortable crying in front of someone else or reacting in any other way that feels natural to me.

Although there are times like this that I might decline offers of support, it doesn’t mean that I’m not grateful for those offers. Knowing that people care enough to offer it does help. There are also many other times where that offer would be very much welcomed and accepted.

In the end, I went alone to the fetal cardiac scan. Yes, I was scared and anxious, but as can often be the case, the fear of doing something is worse than actually doing it. I knew the doctor doing the scan – she was a key part of Jessica’s care antenatally and we still saw her regularly until a couple of years ago. It was lovely to see her again and to update her with how well Jessica was doing. Best of all though, it was a huge relief to hear the words “the baby’s heart looks completely normal”.

Hearing that things are normal on a pregnancy scan is probably something many people take for granted. For me though, it feels like the most wonderful news. I may never get excited about going for a pregnancy scan, but they can still bring me joy nonetheless. Those six little words on that fetal cardiac scan report – “demonstrated normal cardiac anatomy and function” – are the best words I could have asked to hear. 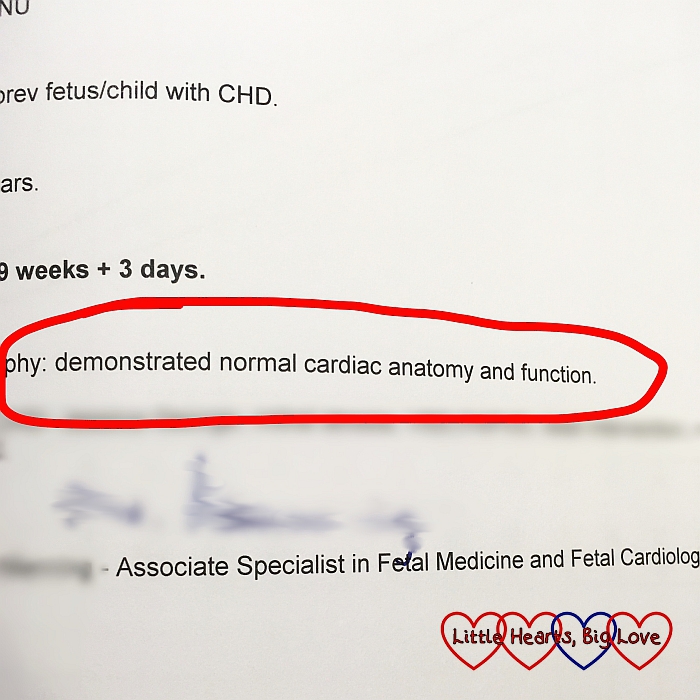 18 thoughts on “Musings of a heart mummy: why I don’t get excited about seeing my baby on scan”