We love doing sculpture trails although most of the ones we have done have been some distance away. I was very happy to see that one was happening a little more locally with painted lions appearing around the Windsor area. The Lions of Windsor and Maidenhead 2019 trail features a pride of 46 colourful lions, aiming to raise money for local charities in commemoration of the 200th anniversary of Queen Victoria’s birth. 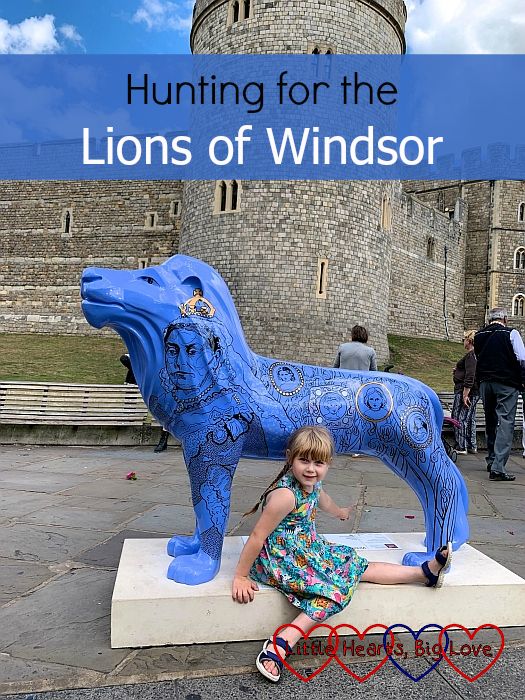 We’d been holding off starting our hunt for the lions in the hope that Daddy could join in too. It’s been a busy time on the event front though. We’d ticked off everything else on our summer activities list and with the summer holidays about to end, we realised that we would just have to go without him.

We started off our hunt in Windsor town centre, spotting our first lion – Singto – in the window of Thai Square. The Duck Tour ‘bus’ was waiting at the bus stop nearby. Sophie was quite excited to see it. We finished off Jessica’s last summer with a trip on the ‘Duck bus’. Sadly Sophie doesn’t really remember it (although she does remember driving past the petrol station and seeing the Duck bus filling up!) but my memories of the trip are very precious ones. 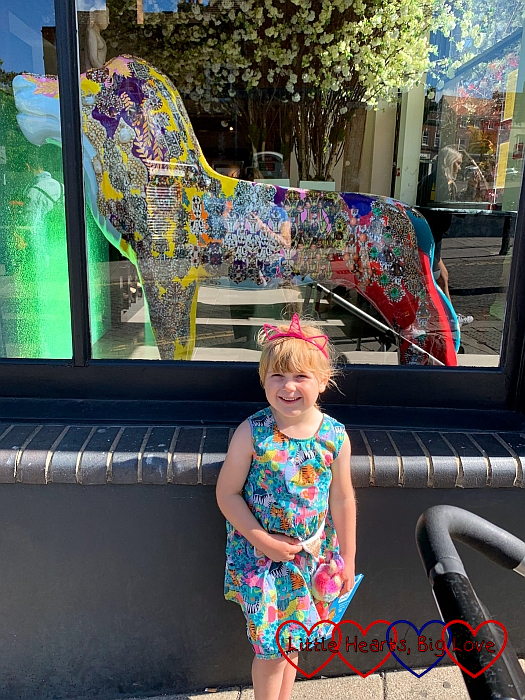 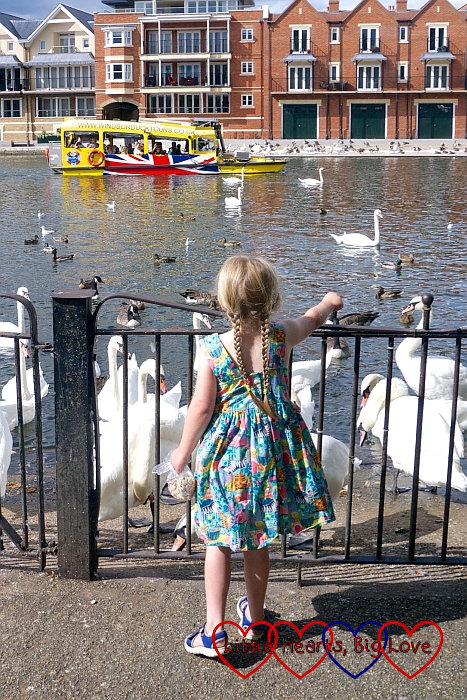 Unlike the other sculpture trails that we have done in the past, there is no app for this one. I’d printed off a map from the website but didn’t find it very easy to navigate with. We managed to find a few more lions though before we passed one of the places where you can buy a trail map (for a £1 donation). This was much easier to use and it also helped having all the names of the lions to tick off as we found them. 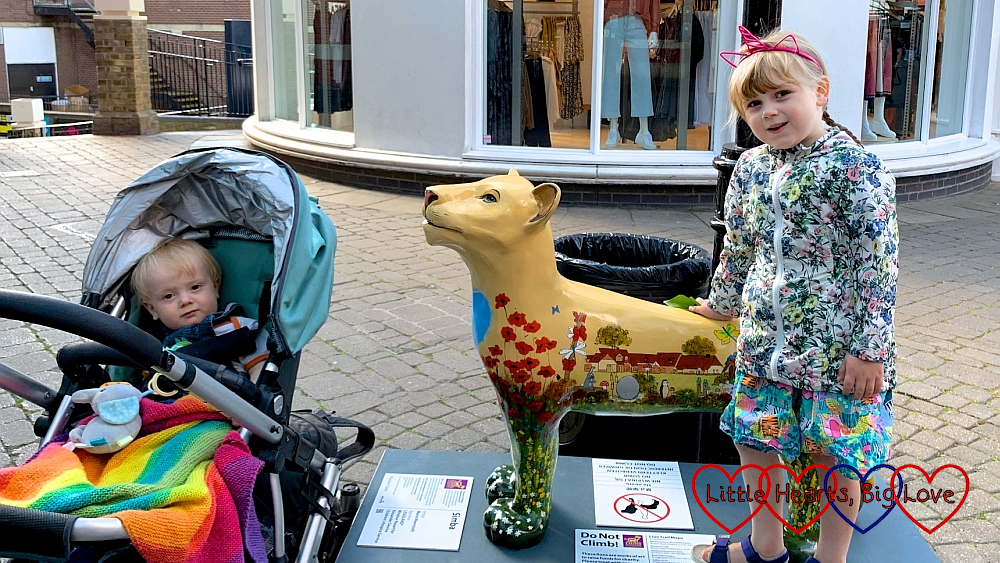 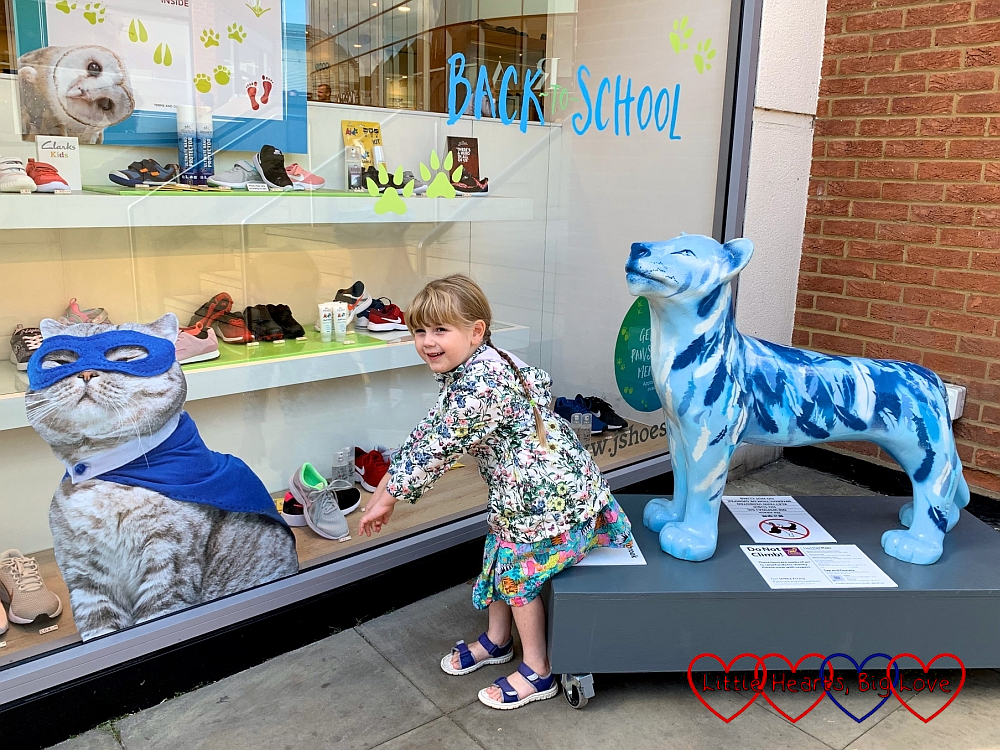 Most of the lions in Windsor town centre are clustered quite closely together. There were a couple that were a bit further out but all were within easy walking distance, including those in Eton which is just across the bridge on the other side of the Thames. We managed to tick off 35 out of the 46 lions before needing to drive further out. Some of the lions were easier to find than others – Leo-nardo was one of the trickier ones for us to find as it is down a side alley. There are also a few that are displayed in shop windows or are only outside within shop opening hours. 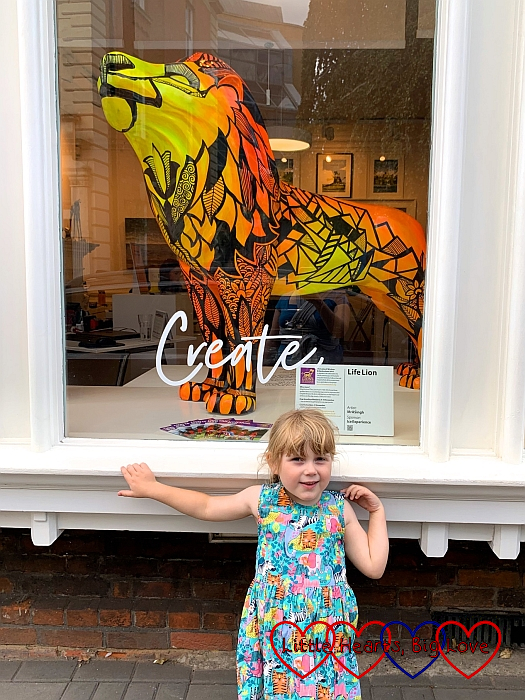 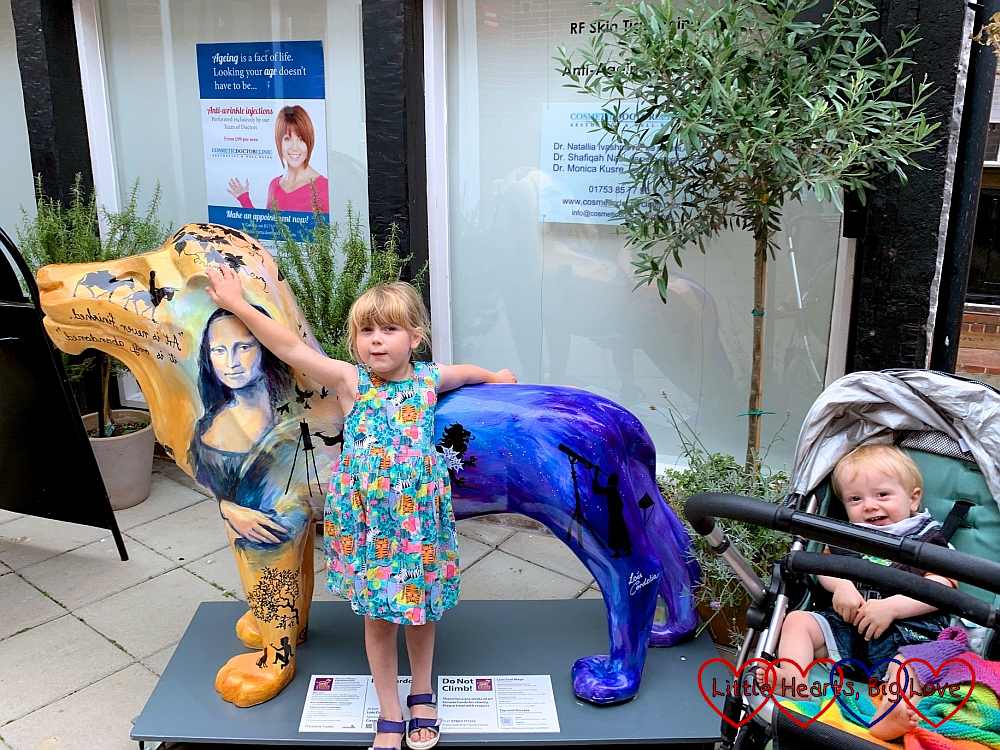 Sophie’s favourite lion was Lagoon, outside Brown’s Brasserie. She loved her colourful tropical themed coat. We passed Lagoon a couple of times while trying to find some of the other lions and each time Sophie went back over to give her a cuddle. She wished she could take her home. There is a charity auction for the lions after the sculpture trail finishes. I am sure they will go for much more money that we would be able to afford to bid though! 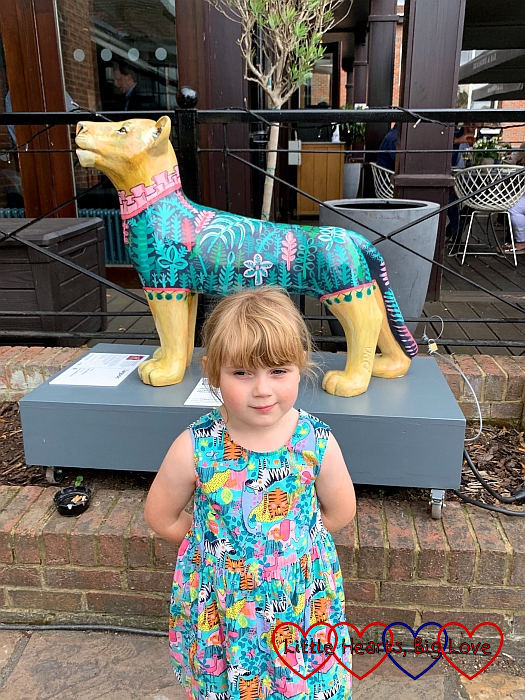 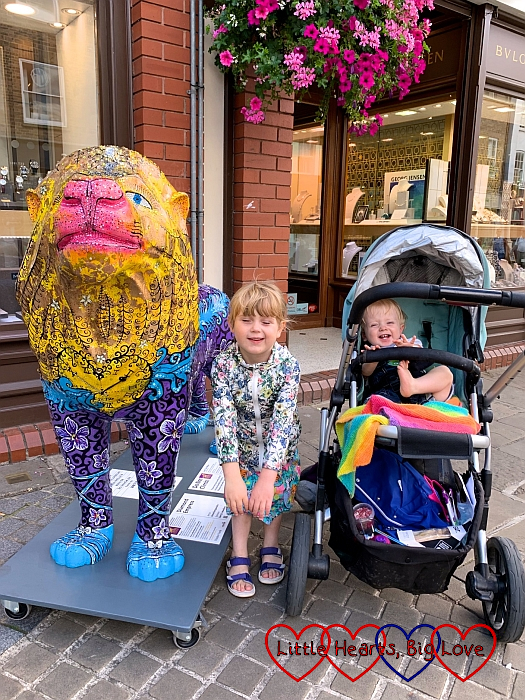 Some of the lions in Windsor are grouped in pairs. We found one pair – Archie and Nulli Secundus – outside the Lions of Windsor pop-up shop where you can buy a range of lion-themed merchandise. The shop is open on Fridays, Saturdays and Sundays, 11am – 5pm. We did the Windsor lions on a Monday when the shop was closed. 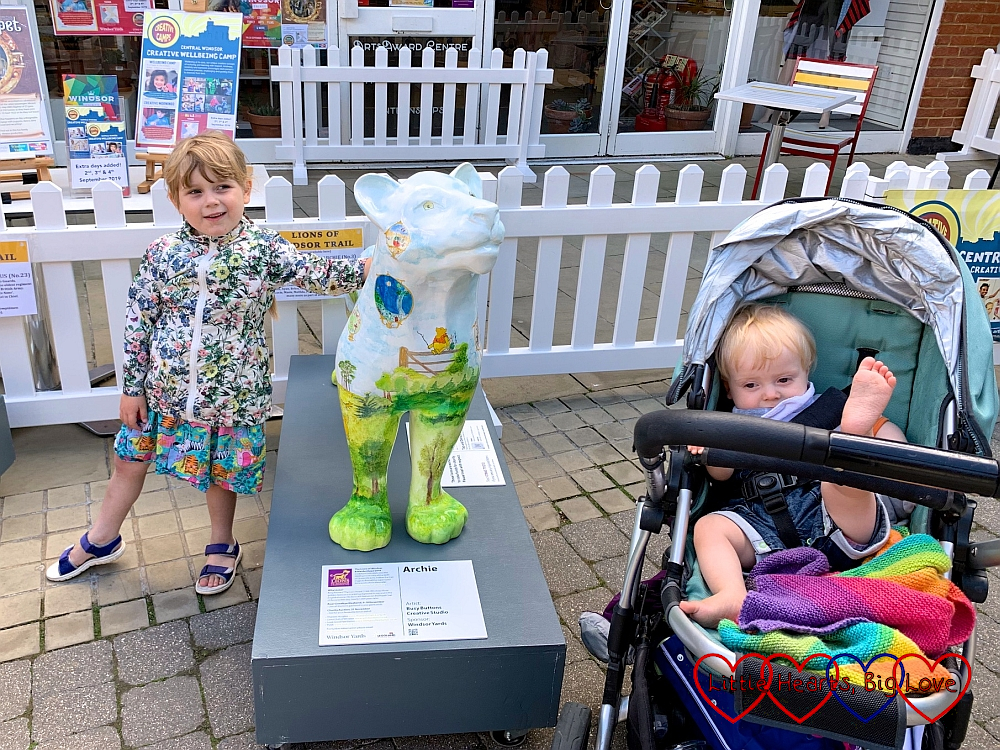 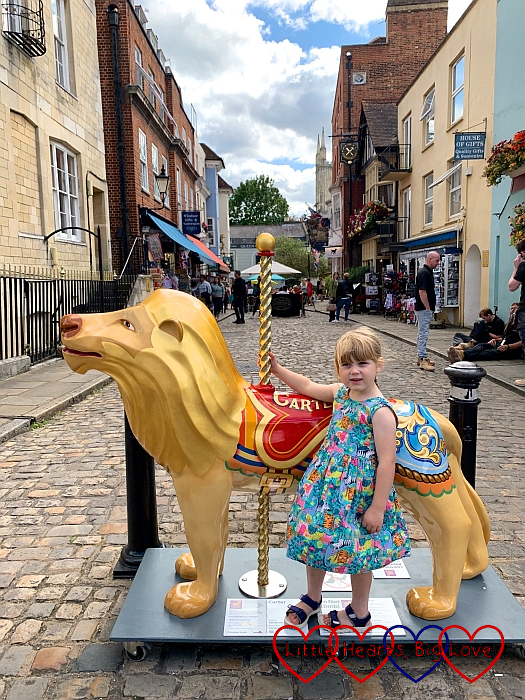 We found the last of the Windsor town centre lions – Alfie – outside the Windsor & Eton Brewery on the Vansittart Estate. On the way back to the car,  Sophie spotted some little fun fair rides in Alexandra Park. As much as she was enjoying the lion hunt, she was ready for a break. The fun fair rides were a good place to stop for a while. 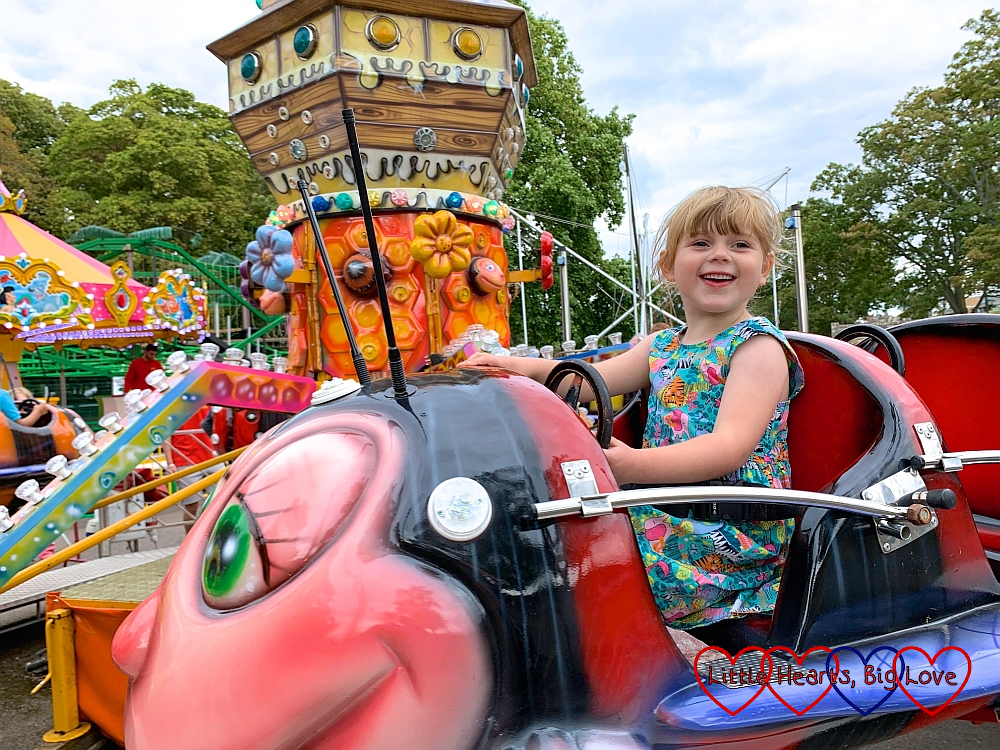 The last three lions around Windsor were further out – two in Old Windsor and one in Datchet. We drove to Old Windsor first where we found Royal Blue in the garden of the Fox & Castle and Prints Owen of Old Windsor in the window of Hands-On Art Adventure. Our final lion was Kris, outside Kris Cruisers along the river in Datchet. 38 lions down, 8 left to find. 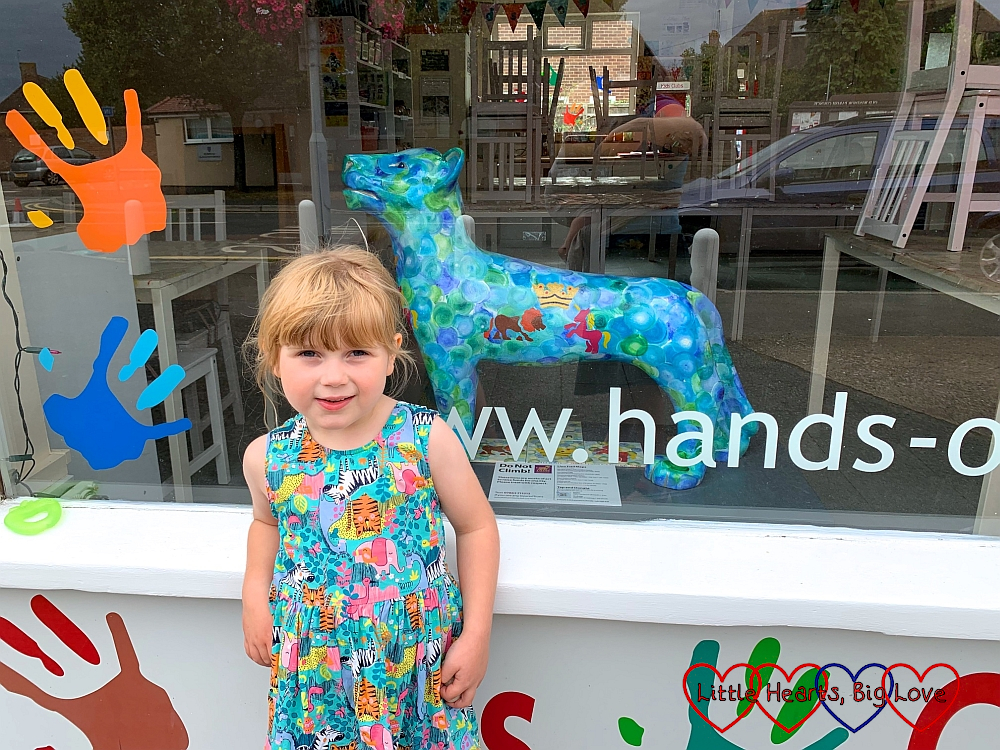 It was a few days before we had another day free to finish our lion hunt. We headed first to Ascot to find the two lions there. Annoyingly, I realised en route that we had left the map at home. Our first lion of the day was Roary, outside Ascot railway station. Sophie loved the sparkly handprints on this lion. I had hoped that we could pick up another map at Ascot railway station. However, it was a Sunday and the ticket office was closed. The paper map would have to wait until we got to Maidenhead; in the meantime, I was using the website to check where the next lion was in Ascot and hoping that I didn’t miss one and have to go back again! 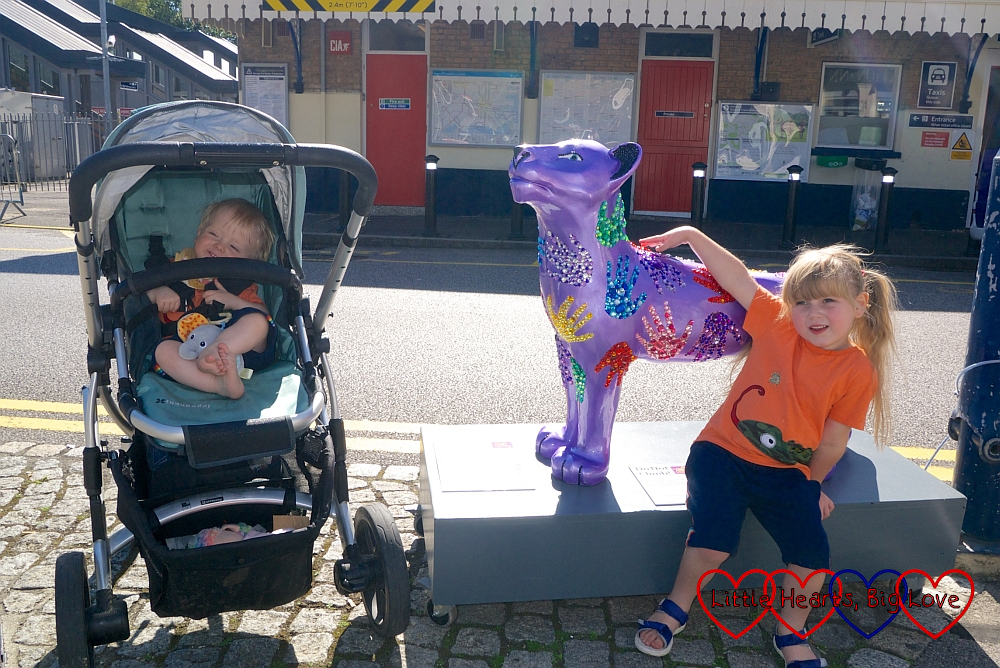 The other Ascot lion was George, who was a short walk away, outside Ascot racecourse. Then it was back to the car to drive to Maidenhead to find the lions in the town centre.

We ticked off three at once – Tree of Life, Upendo and Hakuna Matata (couldn’t resist breaking into song with that one!) – outside Three Mobile in the High Street where we also managed to pick up a new trail map. I was quite relieved that we hadn’t missed any lions between Ascot and Maidenhead. 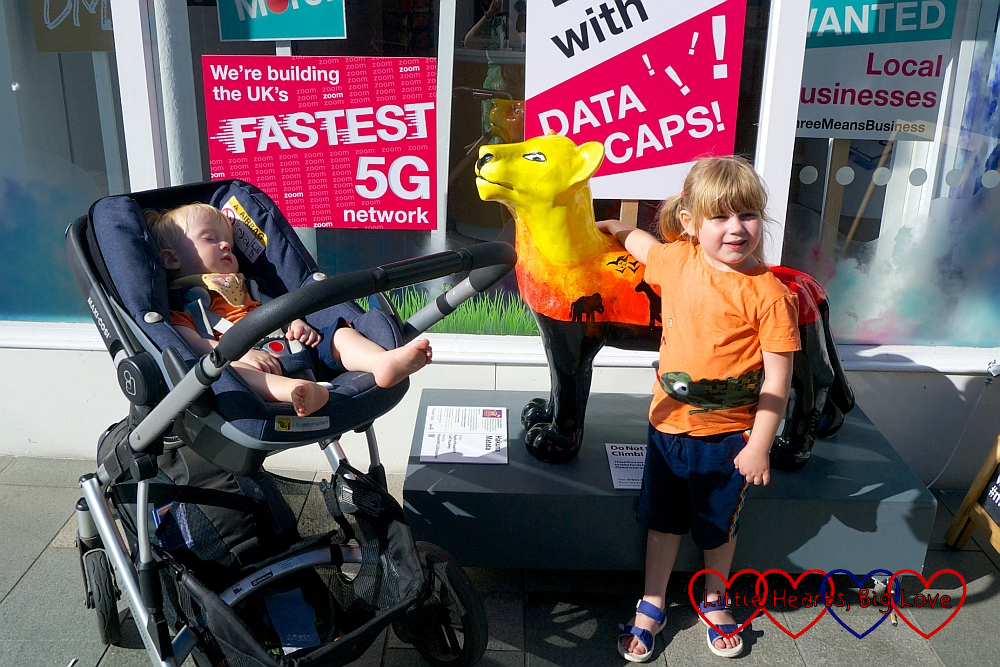 There were two more within easy walking distance – Lion Movement and Idalia – before we went back to the car to head to Boulters Lock for the last lion on the list – Circle of Life. Another sculpture trail completed! 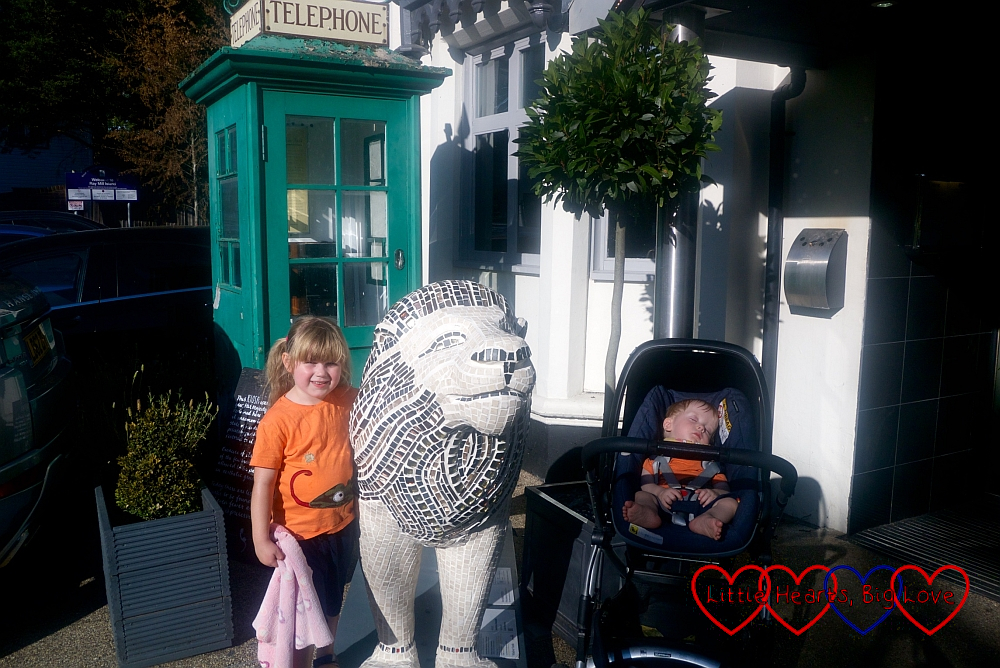 The Lions of Windsor and Maidenhead 2019 sculpture trail is on until 27th October. For more information, click here.

One thought on “Hunting for the Lions of Windsor”