This week could best be described as just being one of those weeks, becoming a little more

towards the end of the week thanks to a unexpected trip to A&E for me. Towards the end of dinner on Thursday, I suddenly started to feel quite unwell which resulted in me needing to call my mother-in-law (who thankfully lives a mile away) to come over and see to the children as I was completely incapacitated. The violent bout of illness lasted around an hour but left me with a very itchy bumpy rash all over and NHS 111 advised going to A&E. My father-in-law kindly took me there whilst my mother-in-law stayed behind with the children. Several hours later and thankfully feeling much better, I was sent home with antihistamines without any clear idea of what exactly had caused it all. Hopefully it won’t be repeated.

This week has also seen me struggle to keep the black dog in check – mostly down to being much more sleep-deprived. Sophie has not been sleeping well – we had one day when she resisted naps throughout most of the day and then didn’t seem to want to settle for the night either – it was 2am before she finally caved in to the tiredness and went to sleep! Most nights this week have been a bit of a battle on the night-time with Sophie deciding on a bedtime after midnight. We’ve had the bottom two molars appear through this week so I’m blaming it on those (plus the cold both girls have had recently hasn’t helped either). The first four molars are now all through so fingers crossed that we have seen the worst of it for now and that things start to settle down again.

We’ve also been having fun with trying to obtain one of Jessica’s meds through our local pharmacy. The manufacturer is currently out of stock with no indication being given of when they will be back in stock. We have a week’s supply at present but have had to phone around other pharmacies locally to try and obtain the meds plus then go back to the GP for another prescription (as the first one was part-filled and so we can’t use that). Fun times.

I’ve also returned the health forms to preschool for Jessica to start in January – the preschool are great and have been asking lots of questions about the kinds of things that they need to look out for and how best to support Jessica with her complex health needs and the cardiac liaison nurse has been involved in some of the discussion but it has made me realise again how complicated Jessica’s heart condition can make things! I’m very thankful though that the preschool are making sure they are really well informed.

And as wonderful as my eldest daughter is, this week has definitely seen the emergence of the ‘threenager’ – she has an iron will and is not afraid to assert it! We’ve definitely had some drama queen moments there although when she’s lovely, she’s utterly adorable. After a particular frustrating couple of hours of toddler contrariness, my irritation melted away as soon as she threw her arms around me for a cuddle and declared “Ah, I love my mummy!”

Dramatic moments aside though, here are some of the more positive moments from the week:

Out and About:
We had a lovely afternoon at the park on our way back from dropping the various forms off at preschool. It was the first time that Sophie has really been able to wander around at the park and she had a lovely time exploring. Jessica has also recently learnt how to jump and get both feet off the ground so she enjoyed the trampoline at the park. 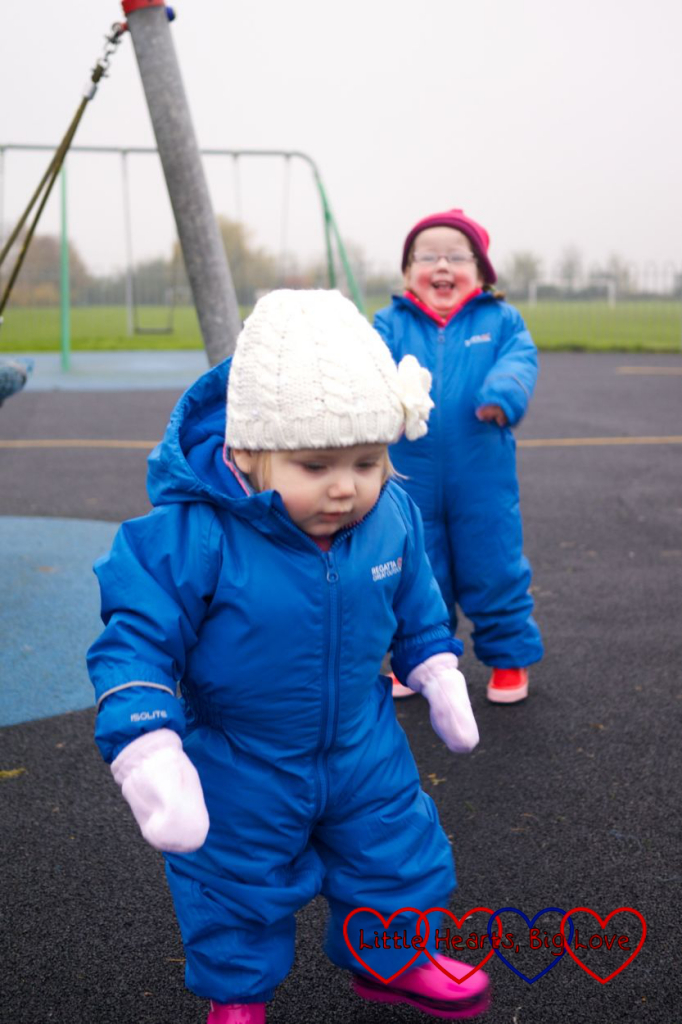 Fun at home:
We’ve spent time at home doing some more Christmas cards this week and Jessica and Sophie have had lots of fun playing with all the animals in their toy zoo. 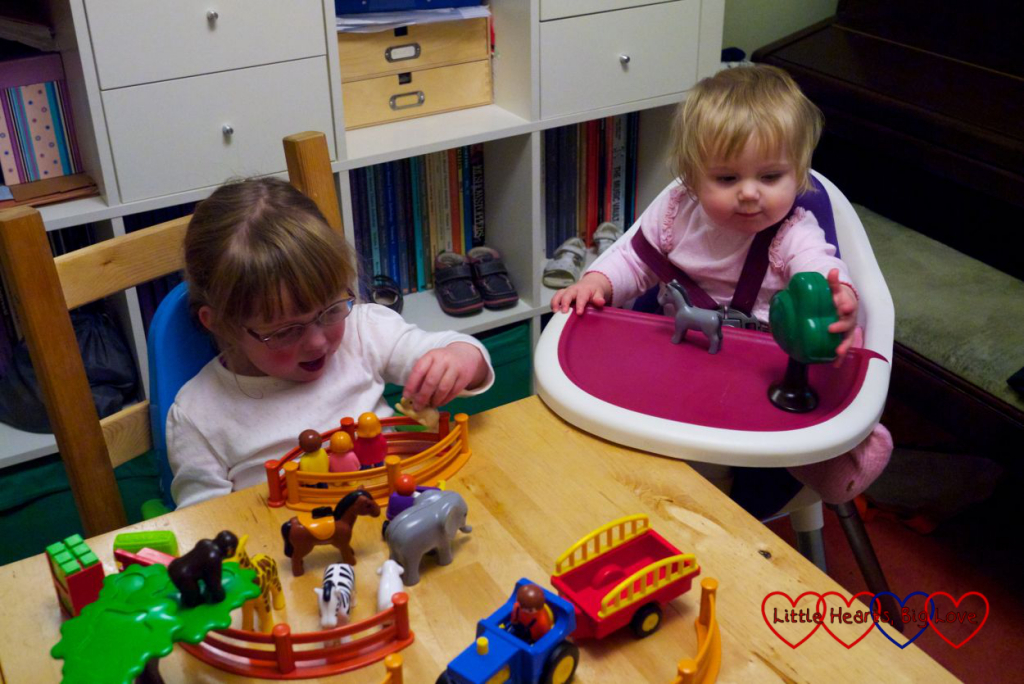 Time for me:
Not a lot of me time this week as you can imagine with Sophie’s erratic bedtime – just about managed to find some time for blogging but that’s been it. I did get a ‘night off’ when Grandma came to babysit so I could go to a church meeting though! I guess the four hours sat in A&E without the girls were some kind of ‘me’ time but not exactly quality though!

My happiest moment:
Seeing the lovely new clothes that Grandma bought for Jessica and Sophie from the RHS Wisley Christmas craft fair – we have some lovely reversible skirts and bodywarmers from Seesaw Children’s Clothes and Ruth Lednik. I especially like the reversible elephant print skirt that Jessica got. 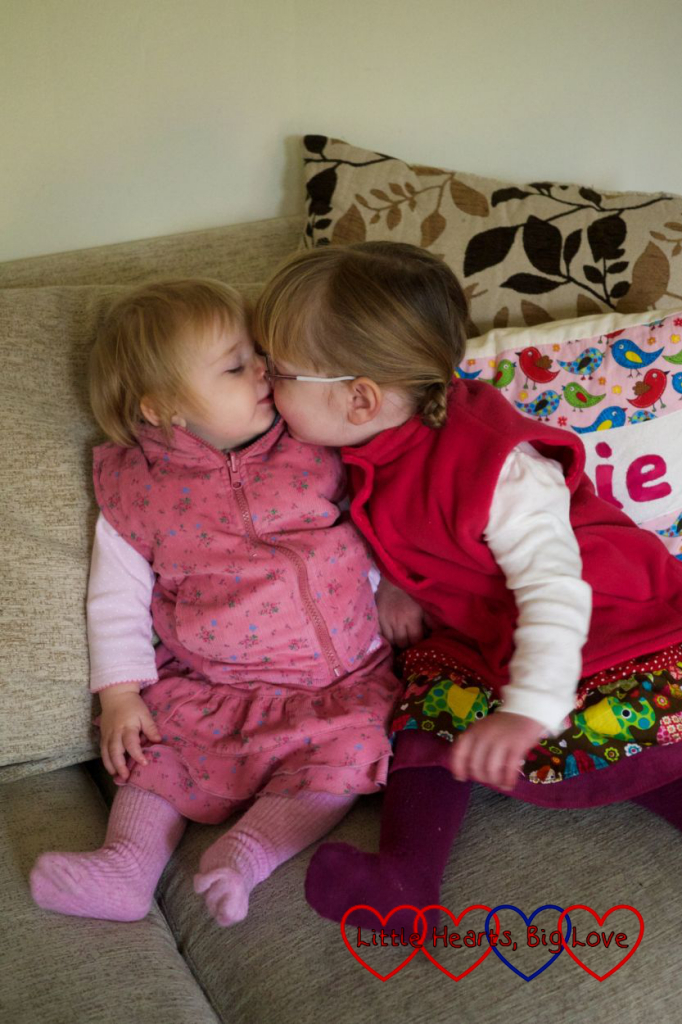 Next week I would like to:
I have a couple of cushions that I need to finish asap so I will definitely be making time to get those done. I also need to make a start on the Christmas shopping! Plus continuing with the decluttering would be good – I managed to blitz the big cupboard in the kitchen this week and felt much better for doing so.