With my twin sister and her two daughters having come to stay for a few days, we thought we’d have a day out and take all four girls to Legoland for the day. 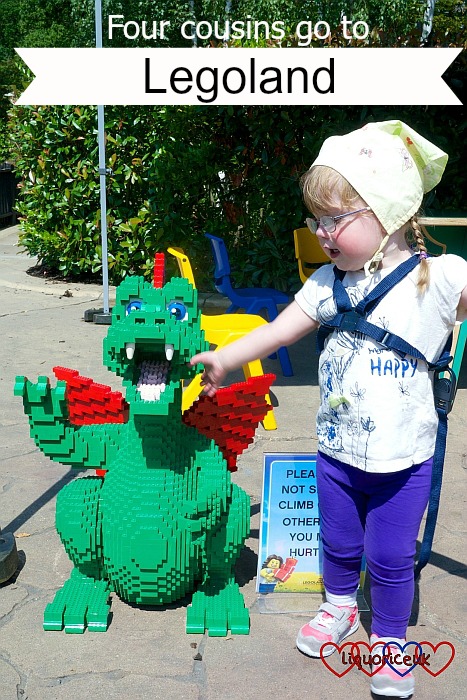 I’ve been quite a few times now with Jessica and Sophie but having the two older girls (my nieces are aged 8 and 10) made for quite a different day out. Much less gentle meandering through the park with lots of time in the play area in Duplo Valley or watching the pirate show (which Jessica loves) and much more whizzing around trying to cram as many rides in as possible. And we certainly did manage to cram them up!

The park was a little less busy than I’d anticipated, with it being the summer holidays (although I suspect the morning’s thunderstorm may have put off some people despite the weather having brightened up). We took the Hill Train down and then headed for Pirate Shores and our first ride of the day – the Jolly Rocker – a rocking boat ride – which had very little queue. As my sister dislikes rides with lots of swinging or spinning, I got to go on the ride with my nieces – a rare treat! We had seats right at the end of the boat which made it even better. 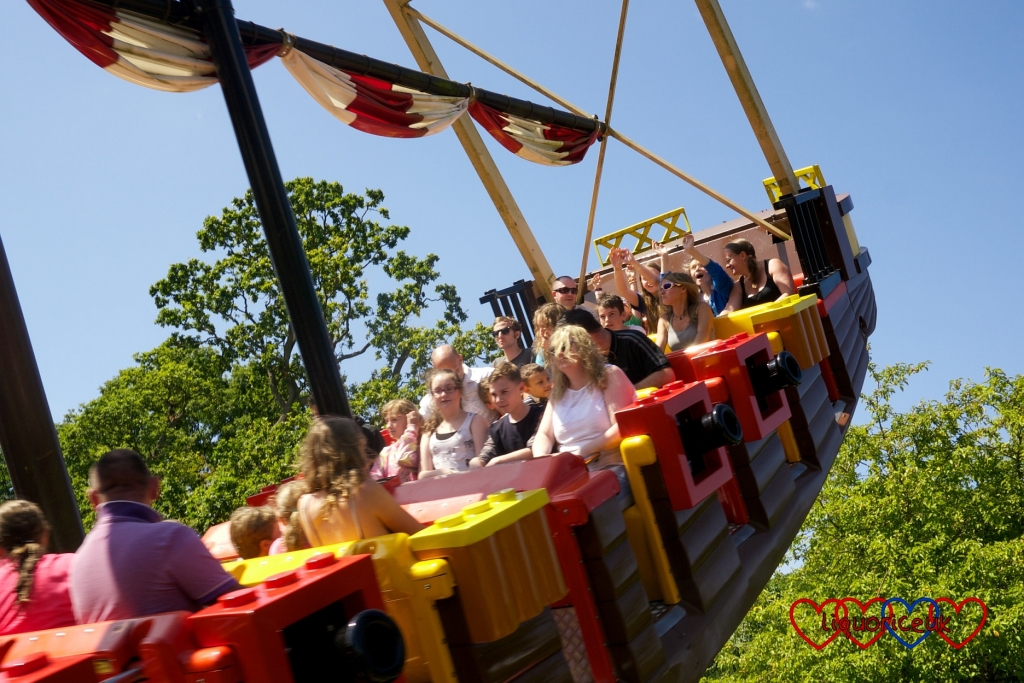 We then headed further down the hill to the Knights’ Kingdom where my sister and nieces made a beeline for The Dragon rollercoaster whilst Jessica, Sophie and I headed for somewhere to sit down with a drink (and a chance for Sophie to have a feed) whilst we waited for the others to work their way through the queue. We then headed for Castaway Camp, a play area for the older children with lots of big slides, rope bridges and climbing where we sat and had a picnic lunch. Sophie was quite content to sit and watch although Jessica wanted to explore a bit more. It wasn’t a great area for her though as she was too little to go on anything there. We considered going on Pirate Falls but with the queue time being 45 minutes, decided to hold off and find something with much smaller queues.

The Spinning Spider fitted that criteria – hardly any queue at all and another chance for me to go on a ride! My nieces loved being able to spin the car around and around. Even better when Auntie Twinny took over and made it spin even faster! We got a little soggy as the rain started up again at this point but thankfully the shower was short-lived. Next stop was Kingdom of the Pharaohs and Desert Chase – a carousel ride. This time Sophie and Jessica could join in and sit on the horses (whilst being held on by an adult) for the ride. Sophie wasn’t too sure at first but once the horse started moving up and down, she seemed quite happy. The two older girls then went on the Thunder Blazer chair-o-plane ride, another ride with hardly any queues. The Laser Raiders, the laser quest ride in this area was on our list of rides to try but again, there was a long queue and so once again we headed off in search of smaller queues elsewhere with a brief stop at Pirate Goldwash where the girls panned for gold. The gold panning was one of the attractions not included in the entry price – it was £3.50 per pan and the girls got a medal each when they handed in the gold they had found. 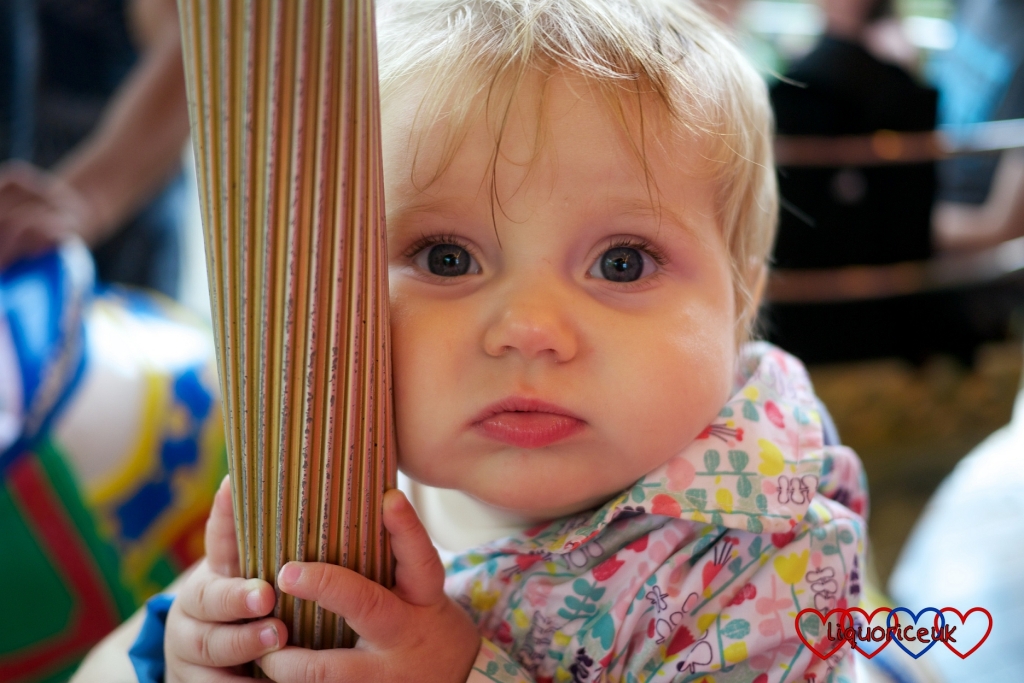 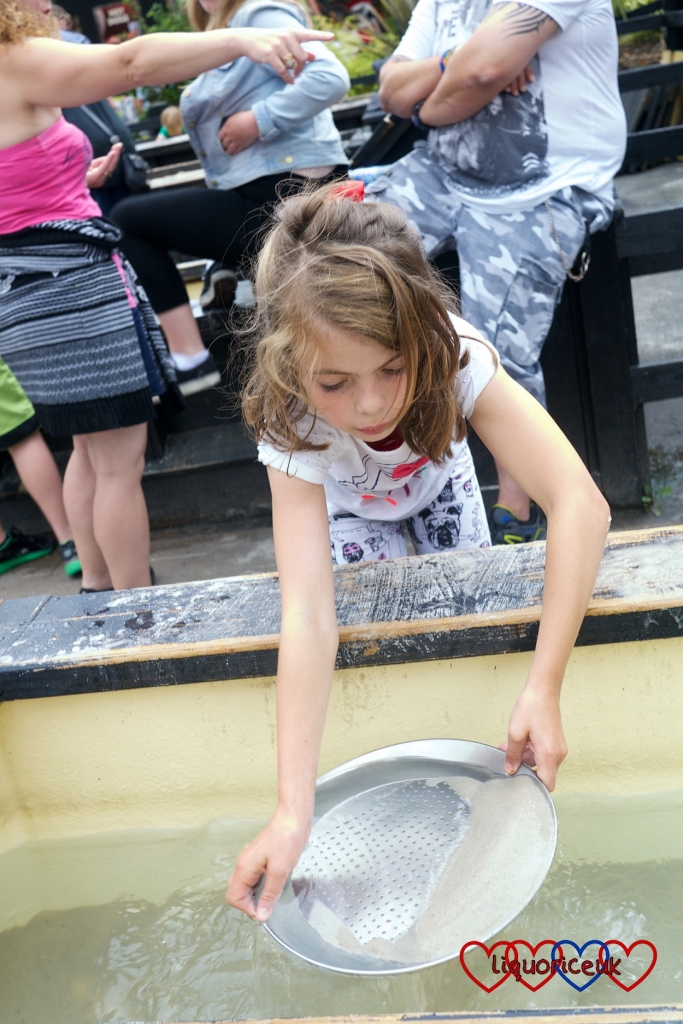 Driving School was a winner with the older girls. Being able to drive a car each around the track and then being able to buy a photo ‘driving licence’ each was a definite highlight of the day as far as the two older girls were concerned – they were very excited about their driving licences! 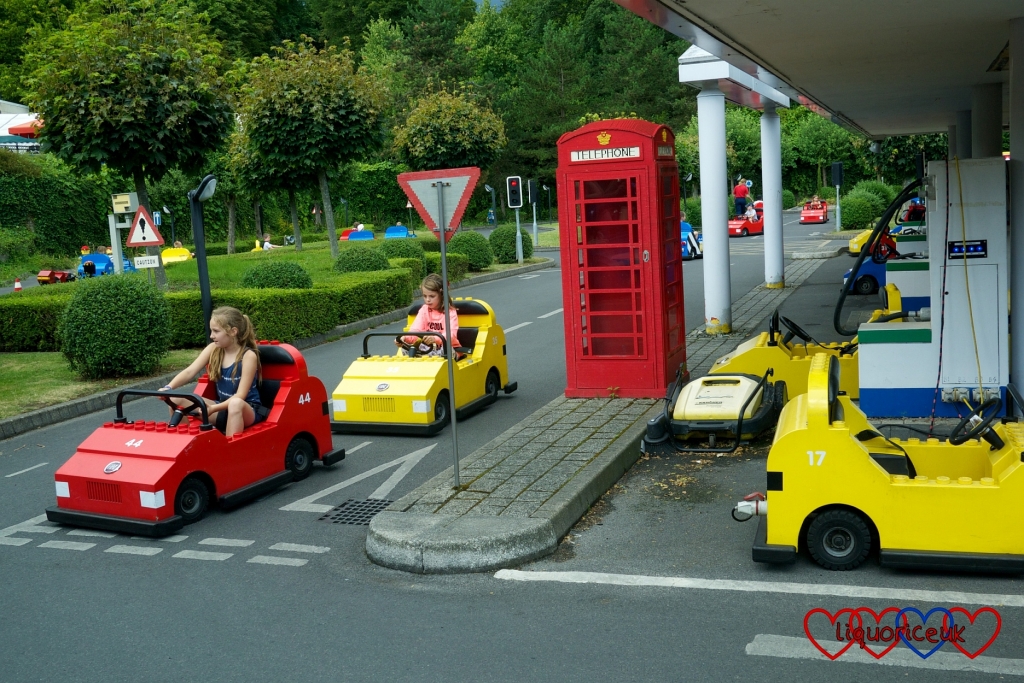 Next stop – Atlantis Submarine Voyage – another ride which was suitable for everyone and perfect timing too for an indoor ride as the rain really starting coming down at this point. Sitting inside a little submarine with clear panels around the bottom and floating around an aquarium was great fun. All four girls loved this ride and being able to watch the fish swimming past. There were several more tanks of fish to look at on the way out after getting off this ride and the girls enjoyed being able to crawl underneath and stand up in the middle and look through the tanks! 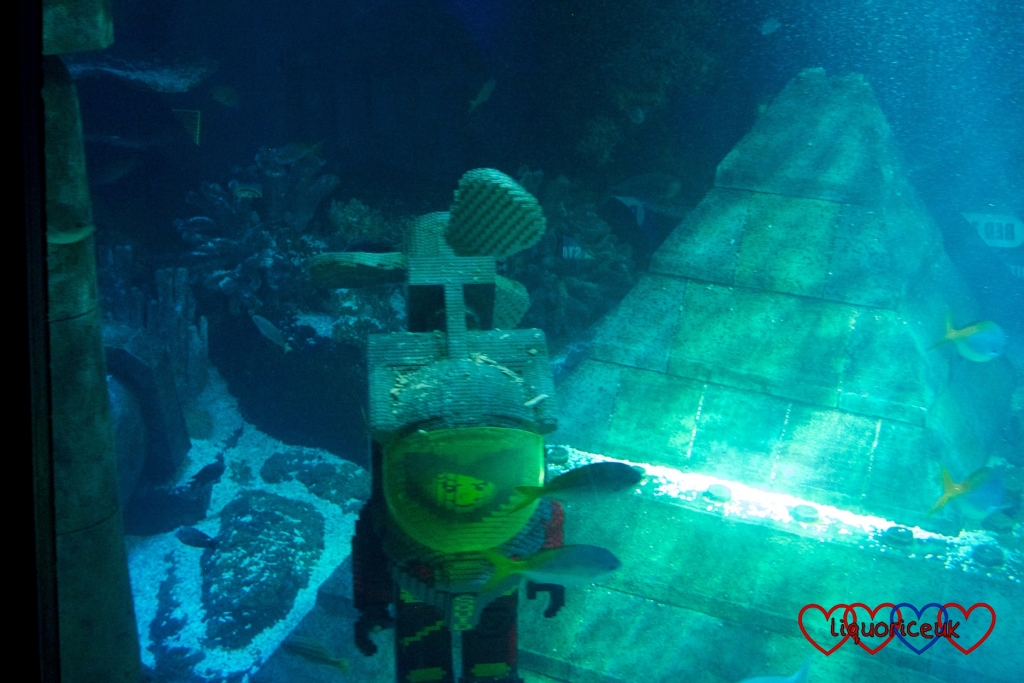 Then it was off to Lego City to catch the pirate stunt show before heading back to Pirate Shores for the Pirate Falls ride now that the queue for this was much shorter. Again Jessica and Sophie were too small for this ride but my sister and my nieces enjoyed getting very wet on it (although the bright yellow Legoland ponchos helped keep the worst off!). We had another go on the Jolly Rocker and then headed to Land of the Vikings for a ride on the Longboat Invader and the Vikings’ River Splash, another water ride where my sister and nieces got very wet (and Jessica and I enjoyed being able to squirt them with a water cannon whilst watching them go round it!). 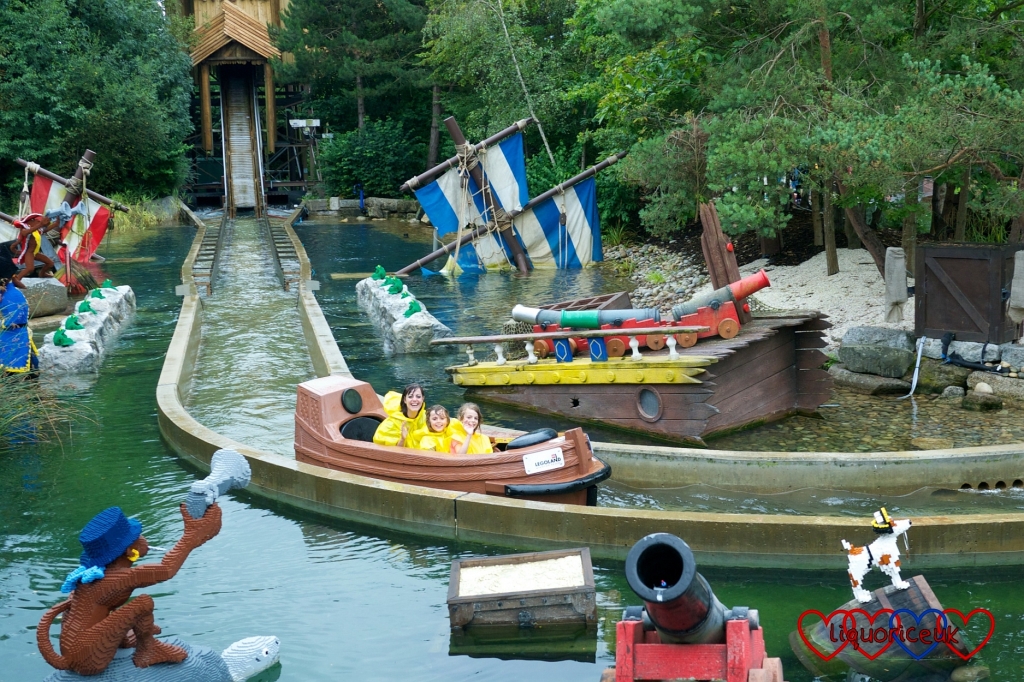 Our walk around the park had pretty much taken us back up to the top again so we took the Hill Train down a second time and headed towards Duplo Valley for a ride along Fairytale Brook – a lovely gentle boat ride with Lego models of fairytale scenes to look at and perfect for all four of the girls although Jessica was very tired by this time. 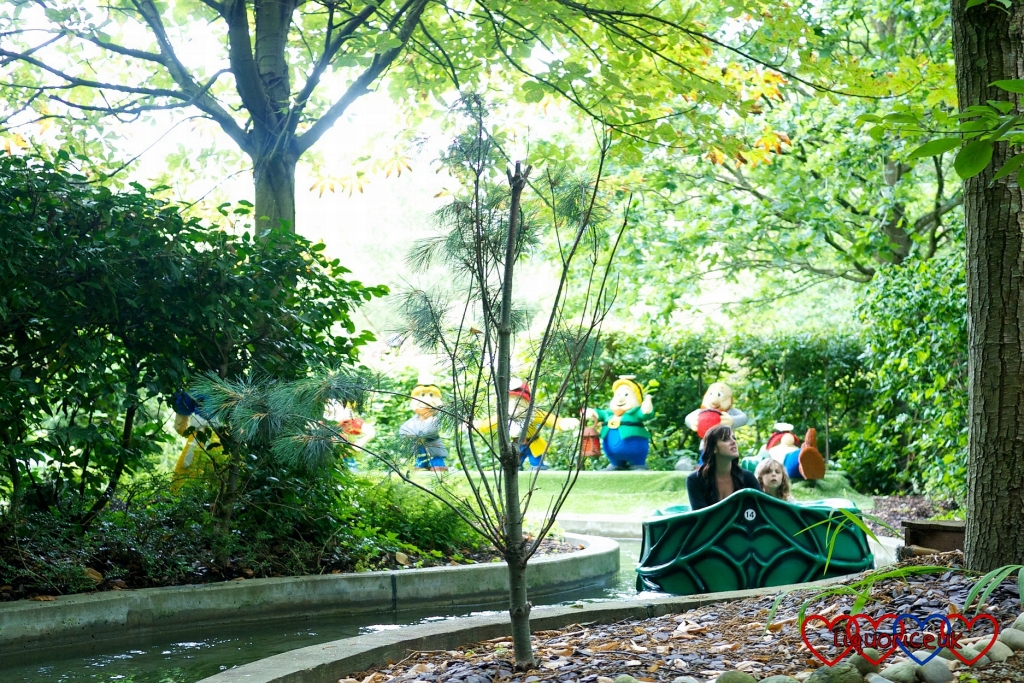 We had a wander through Miniland on our way back up to the exit and the girls loved looking at all the Lego models – especially the London ones. Four very tired little girls back at the car and heading home – all in all, a lovely day out. 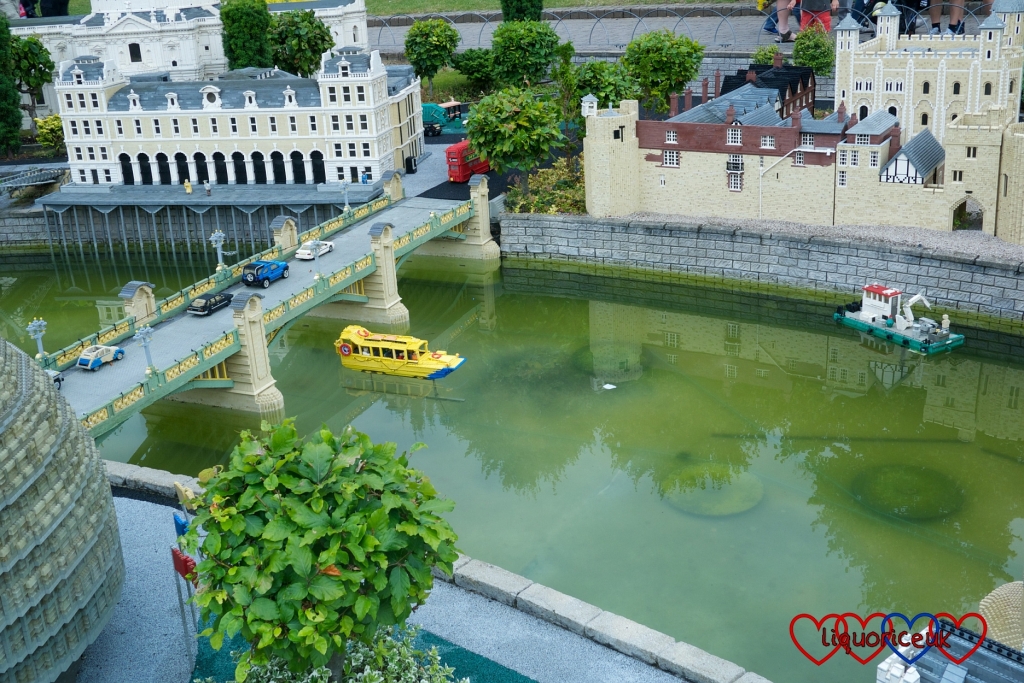 At 10 and 8, My nieces were the ideal age for being able to fully enjoy their day out. Both girls were able to go on all the rides (although the 8 year old needed to be accompanied by an adult for some as she is just under 1.3m tall). With Jessica and Sophie both being under 0.9m tall, there were only a handful of rides which were suitable for them, but they enjoyed just being able to spend time with the cousins, look at the Lego figures and see the different areas of the park. Duplo Valley is the best area for them as it is mostly aimed at younger children and now that Sophie is able to sit without support, she is able to go on all the rides that Jessica can go on (which makes days out on my own with both girls a lot easier!) The Knights’ Kingdom is probably the area with the least options available for really little ones – I don’t think there were any rides in this area which Jessica and Sophie could have gone on.

Legoland is not a cheap day out though– on the gate, an adult ticket costs £46.80 and a child ticket costs £41.40 so I would advise either buying in advance (at least two days beforehand) online (which saves you up to 25% of the ticket price) or using Clubcard vouchers, Nectar points or 2 for 1 coupons to make it cheaper. I have an annual pass which has been good value for money (we live quite close to Legoland so have been able to go several times) and my sister and the girls paid for their tickets with Nectar points (each 500 points = £5 towards ticket price). I’d also recommend taking drinks and a picnic as food inside the park is quite pricey. Most of the rides are included in the price but there are a few extra stalls and attractions which charge a small amount. Buying ride photos can also become very expensive – they are £10 each or you can buy a photo pass for £20 which covers you for 4 ride photos – would definitely recommend getting this if you plan to buy photos from the rides.

One thought on “Four cousins go to Legoland”