Five years ago today, hubby and I went off for the 20-week scan, excited at the thought of seeing our first baby on the screen.  We left the hospital that day with our world having changed forever.  There was something wrong with our baby’s heart.

I blog a lot about my reflections on being a heart parent but hubby rarely shares his thoughts.  My method of coping with things is to write about them, either here or in my personal diary; his is to focus on the immediate situation and to store the memories away until he needs to bring them out again.  I’m incredibly touched that he has been willing to share them for my blog – and it’s been interesting for me to hear his perspective on it all again too.

Five years into the journey – this is a heart dad’s perspective: 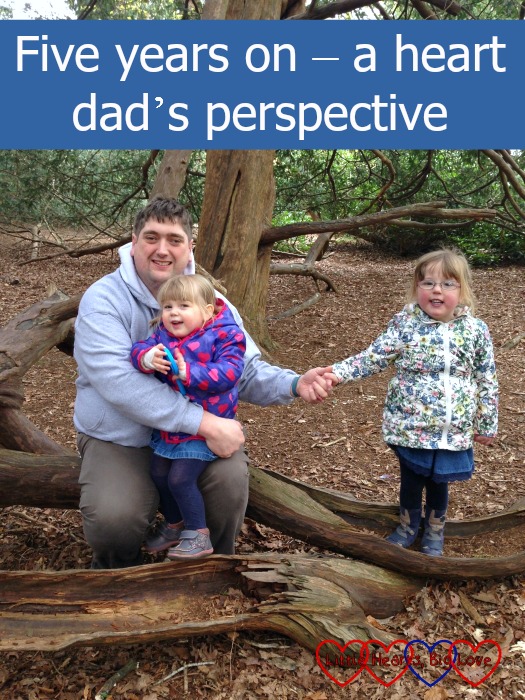 “Five years.  It feels like a long time ago; so much has happened in that time.

I didn’t know what to expect from the scan that day.  I thought we were just going to see the baby and whilst I knew that they would be checking to make sure everything was developing normally, I never imagined the day would end up with being told what we were told.

Most of it is a blur now.  I remember going to the scan and being sent for a walk to help get the baby into a better position.  I remember sitting in the café before going back to the scan room.  I know Louise was worried when she saw a second person there, but I didn’t think much of it at that point – I just thought it was someone more senior. We went to the room with the tissues, were told that something didn’t look right with the baby’s heart and that we would be referred for another appointment to look more closely.  The midwife gave us some leaflets and told us not to Google anything because it would scare us.  I remember having to go for a work meeting after we came home, and being relieved at being called away to go to Oxford; going to the appointment at Oxford and then coming home and having to explain it to everyone.

I was glad that Oxford could see us that day – we didn’t have to go to sleep that night worrying about the unknown because we knew (even if I did wish I could wake up and find it had all been a dream).  The doctors were brilliant and the diagram they drew really helped us to understand what was wrong with Jessica’s heart.  For me, it helped to know what the parameters were that we were dealing with and the options available.  Even if it wasn’t very positive, we at least had some idea of the pathways we could follow.  What reassured me most was being told that if Jessica got through the surgeries, there was a good chance of her being able to do the things that most children could do – she might not be able to run very fast, but she could have a reasonably normal quality of life.

There’s so many different conditions out there and it’s a whole field that you never really know anything about until suddenly you’re thrust through a door and you can’t escape it – you just have to try and absorb the information and find your way in this new world.  When I woke up that morning I had no idea that this door even existed and then suddenly I was there in this whole new world that I never expected to find myself in.

It brings home the fact that things change. In a day, in an instant.  Something just happens and then suddenly everything’s different.

I never thought “why us?” It is what it is, the start of a journey, a journey I never expected to take.

Looking back, it’s amazing how quickly everything happened.  Eight weeks after we found out, we were having in-utero surgery and it’s amazing how we managed to pack in all the appointments, and the discussion surrounding it so that surgery could take place.  The whole process from diagnosis to Jessica arriving was only eighteen weeks. 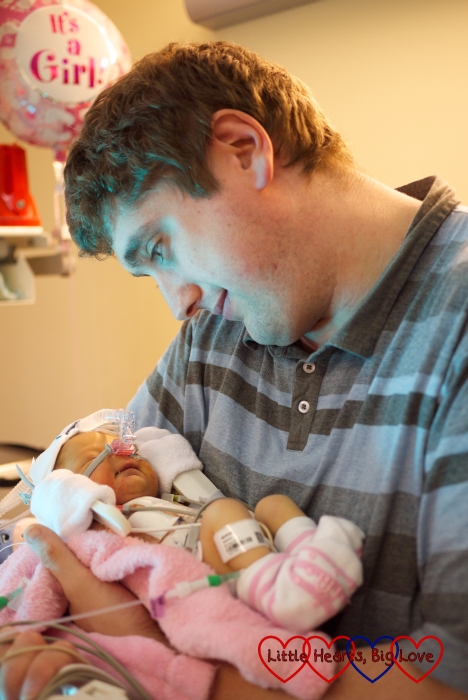 I just wanted her to be able to meet her – I didn’t think further ahead at that point.  And then once she arrived, it became all about focusing on the next step, the next hurdle.  I coped by going with the flow – accepting the rollercoaster of surgeries and being in hospital.  I learned that things can change quickly which made it hard with trying to give updates to family on how well Jessica was doing.

I remember seeing families with older children coming back in after not having been in hospital for a couple of years or more, and it seemed strange.  We spent so much time in the hospital in that first year and now it will be us coming back in after a longer period of time.  And in a lot of ways, it’s harder to go back – we know Jessica and her personality so much more now and she’s much more aware of what’s going on.

Louise focuses more on the day-to-day rather than looking ahead, but I can’t do that.  Although the fear of what might happen is still there, I have to plan ahead, to think about work and everything that has to happen in the coming months.  Hopefully we’ll get through the next steps and carry on with normal life again.

We’ve been so lucky.  I look at Jessica and see how much joy she brings to everyone around her – to watch her laughing, and singing and dancing, and just enjoying life is amazing.  I don’t ever want that to end.” 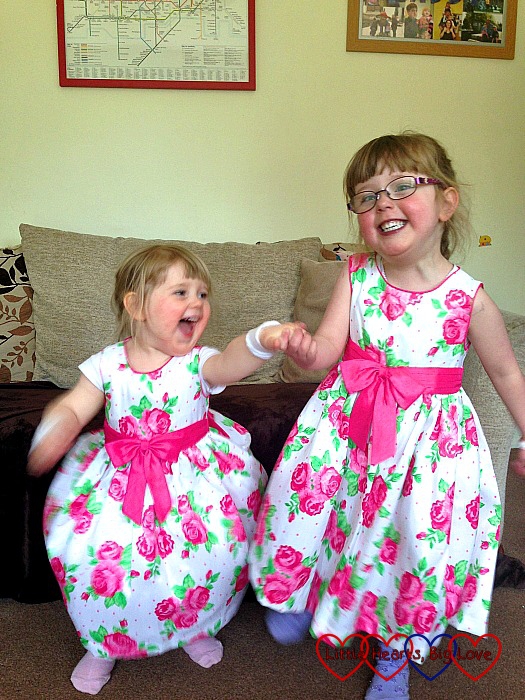 Next month will see us take the first step towards Jessica’s next surgery as we head back into hospital for a cardiac catheter procedure.  When we took our first steps on our journey as a heart family five years ago, our belief that our baby girl was in God’s hands and that somehow we would endure the journey ahead helped us through.  Somehow we will make it through the next steps too – I just hope and pray that we all come through it together.

36 thoughts on “Five years on – a heart dad’s perspective”