Last week Thomas came down with a cough and a cold. At first he seemed okay, but when he started to become wheezy, we made an emergency appointment with the GP. By the time we got to the GP, Thomas had perked up and was chasing Sophie around the waiting room. I thought we’d end up being prescribed an inhaler and sent home – instead we were sent to A&E.

“Which hospital are we going to, Mummy?” Sophie asked, as we drove there.

“The one where Thomas went to when he had a pulled elbow.”

“Is that the one where Jessica died?” 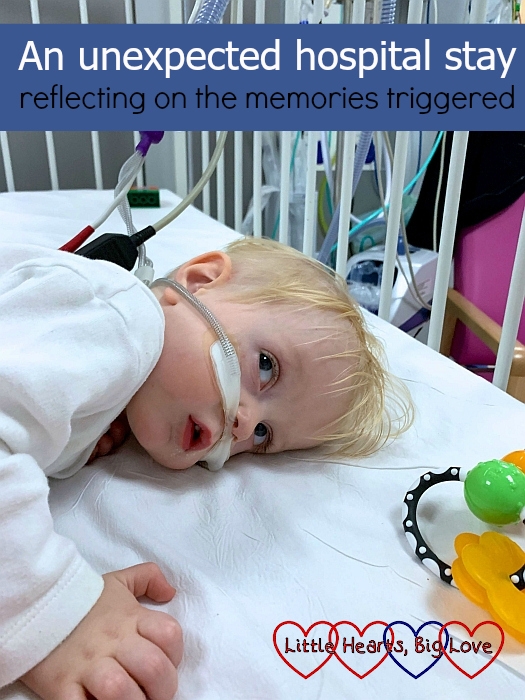 It’s always hard going back to the hospital where Jessica died. Thankfully Sophie seemed to be coping well with it. I think it helps that the A&E department is no longer in the same place, so we didn’t have to pass the parts of the hospital that we were in on the night Jessica died. Thomas didn’t seem too unwell at this point, but we went straight from triage into a cubicle to be assessed and then were transferred across to the paediatric assessment unit (PAU) for monitoring there.

Stepping back into PAU was hard. So many memories came rushing back. We’d had so many trips here back when we’d had open access with Jessica. The bed Thomas was in was just across from the bed where Jessica had been the last time we were here, a few weeks before she died. I could see her there, lying on the bed in her school uniform, cuddling her Kerry. Still full of smiles. I never dreamed it would be the last time we would be there with her. 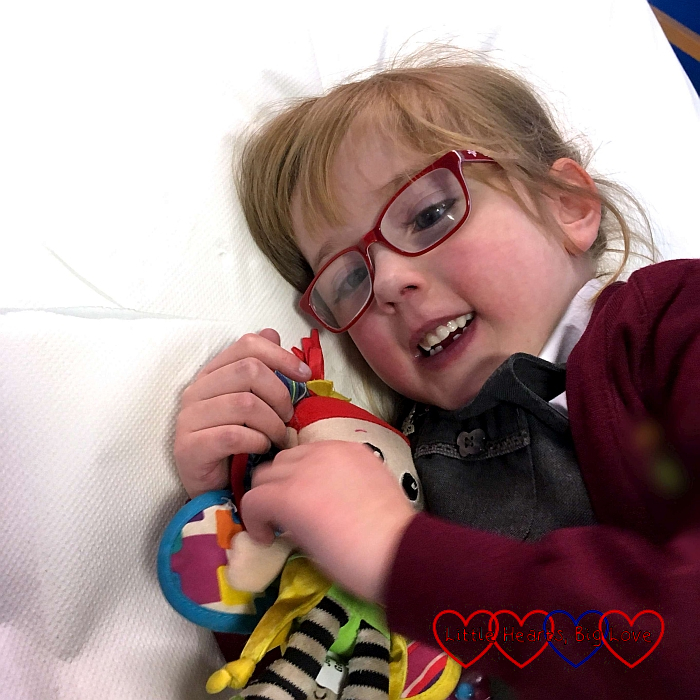 Hubby phoned to check where we were; what he needed to bring from home.

“I’ll meet you over on PAU as normal,” he said.

As normal. We’d instantly slipped back into hospital mode. Back into those old familiar routines from the days when hospital admissions like this were part of our normal.

That first night was horribly reminiscent of Jessica’s last hospital stay. Thomas was diagnosed with viral wheeze – the same thing that Jessica had. So many similarities to last time. Trying salbutamol inhalers, then being put on oxygen and Airvo to help support his breathing and keep his sats up, giving nebulisers. A night spent dozing fitfully in a chair by his bed. Everything just like last time. And seeing how poorly he got; how quickly he went from being quite perky to being really unwell was so frightening. At one point, he had a temperature of 40.1°C. I could see his little chest sucking in with the effort to breathe. The fear that this could go the same way hit hard along with the guilt. Why hadn’t I gone to the doctor sooner? Did I not realise how poorly he was? And the knowledge that things could change in an instant, that we weren’t immune to tragedy. Please don’t take Thomas too…

So many memories, so many reminders of those last few days of Jessica’s life.

“Have you done this before?” the nurse asked, as I held Thomas while she gave him salbutamol puffs through an inhaler.  Yes, I thought, the last time I did this was two hours before Jessica collapsed and died.

Every walk through the hospital was a reminder of various moments on her journey – right up to the very end and those awful days immediately following her death.

Yet in spite of the painful triggers, the familiarity of the hospital was strangely comforting at times too. The memories that came back crisp and clear brought me closer to Jessica; brought back the reminder of what our life with her felt like. On one hand, I welcomed the rush of memories; the way that Jessica suddenly came back into sharp focus. But with those crisp, clear memories came intense pain and disbelief. How can you not be here, Jessica? Why are you not here with me? All the unanswered questions; all the guilt. Why didn’t I do more with Jessica? Could I have saved her if we’d gone back to hospital on that very last day?

Sitting in the chair, with Thomas asleep on me, it felt like I’d stepped back seven years. Back to one of our admissions with Jessica in this very hospital. I could picture her in the cot, playing peek-a-boo with the blanket. The smells, the sounds, the beeping of the machines – everything feeling familiar once more. Just with a different child this time. Lifting Thomas out of the cot, trying to juggle all the tubes and wires. Not as many as I’d had to juggle at times with Jessica, but still so easy to get tangled up in them all! Automatically putting ECG stickers and sats probes back on if they fell off. Looking at the monitors that once were so familiar. 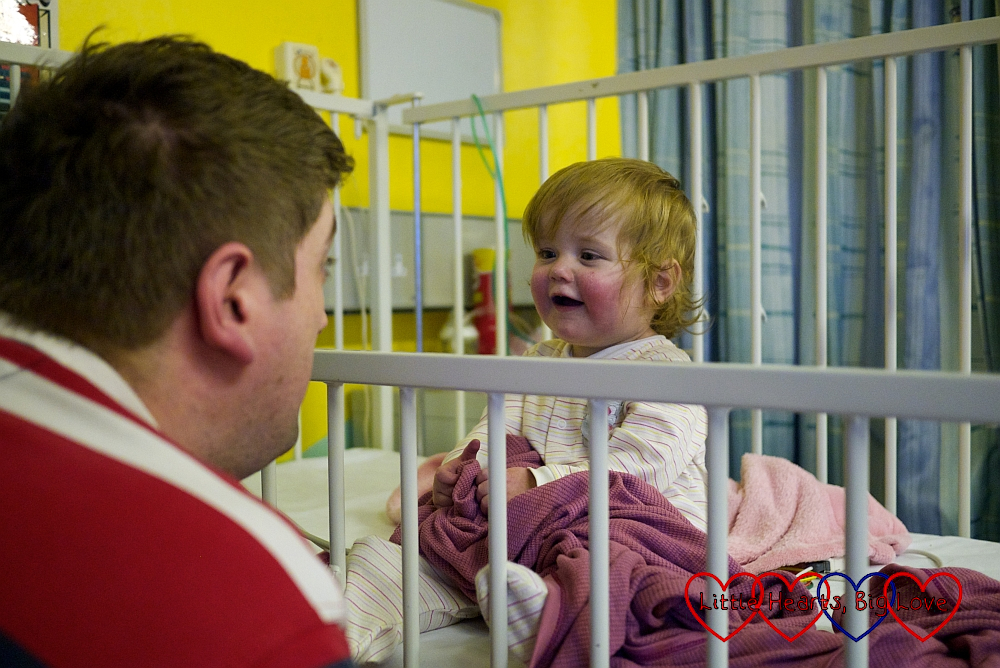 It’s strange how quickly we settled back into the normality of it all. The routine of the hospital and our own familiar roles within it. Slipping back into juggling the needs of two children in two locations; instinctively knowing what we needed to do and how to do it.

Some things were purposely avoided. As I popped to the hospital shop for snacks, I avoided the magazines and puzzle books. I remember sitting by Jessica’s bed on that last hospital stay doing a puzzle book while she dozed or watched a DVD. Holding her hand when she asked and then letting go after a few minutes because it was tricky to hold the book and write in the puzzle one-handed. I still have that book, with one puzzle still incomplete. Still have the guilt that I sat there doing puzzles when I could have been talking to her, could have held her hand more. I’d thought we were out of the woods, that she was on the mend. Never dreamed those were the last days. I still can’t bear the thought of picking up a puzzle book again, let alone ever doing any more in that one. 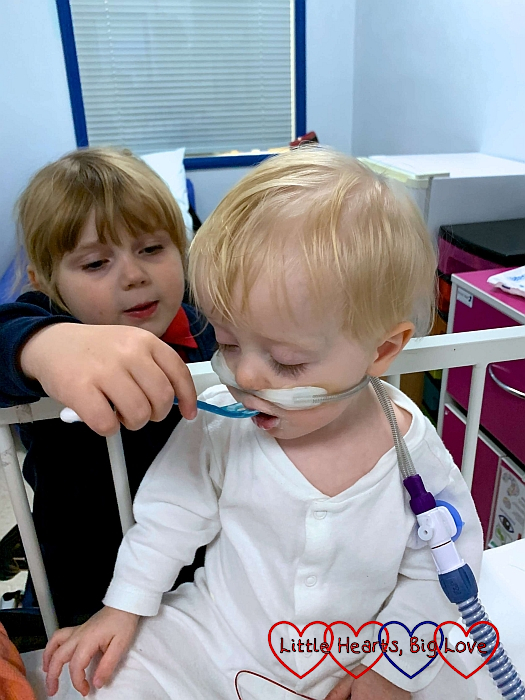 It ended up being a two-night stay. The usual. Every time Jessica was in hospital for something other than a surgery, it was always a two-night stay. Coming home with antibiotics and a weaning regime for the salbutamol. Writing out the meds schedule and putting it on the fridge. Just like the last time…

I’d managed to stay strong while Thomas was in hospital, but it’s been a bit of an emotional rollercoaster since coming home. Too many similarities to that last stay with Jessica. I’ve reminded myself that Thomas has no underlying health issues, but the fear that he could suddenly worsen has lurked at the back of my mind. Thankfully, so far he’s been continuing to get better, and becoming his usual happy self again. Hopefully everything will be okay. I just need to be gentle with myself as I process all the emotions that this hospital stay has triggered.

2 thoughts on “An unexpected hospital stay: reflecting on the memories triggered”