Like a lot of toddlers, Jessica is a huge fan of CBeebies and as soon as we heard that CBeebies Land was coming to Alton Towers, we knew we would have to try and take her at some point. 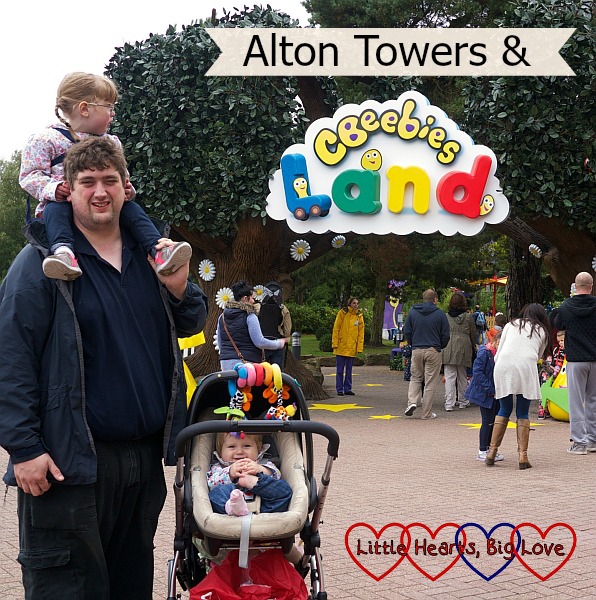 As we walked through the gates and headed in the direction of CBeebies Land and she recognised the CBeebies bugs by the entrance, she got very excited – especially once we were through the entrance and she could see the Postman Pat ride and In the Night Garden ride. 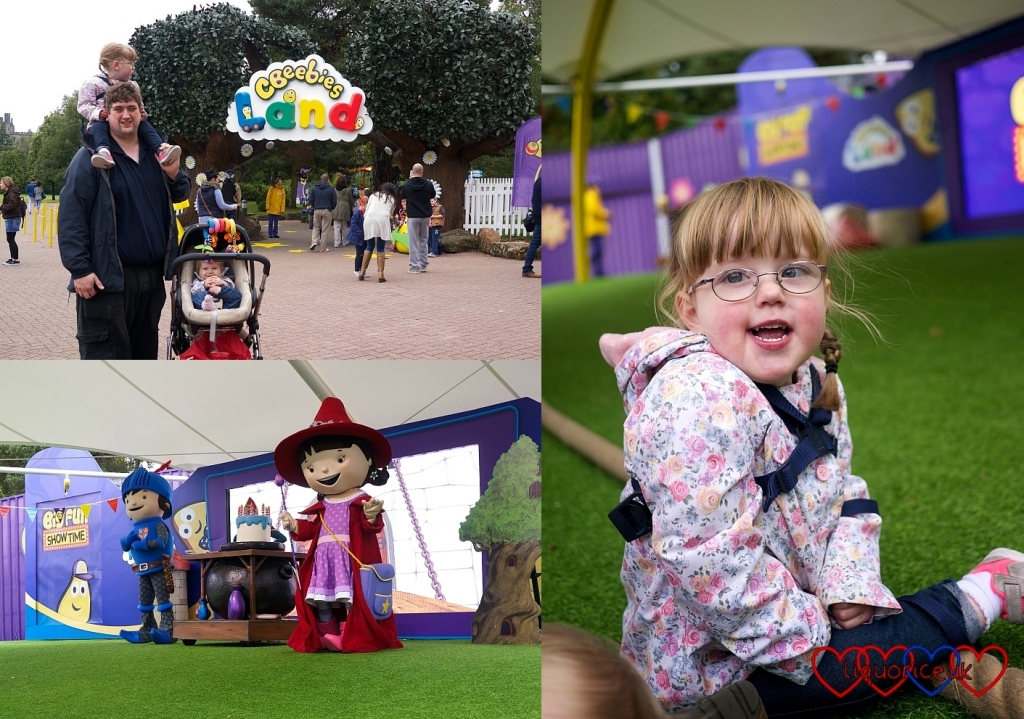 We were a little later getting to the park than I hoped and as it was already past 11am, the queues for the most popular rides were already up to 45 minutes so we headed over to the Big Fun Show to sit and watch Mike the Knight celebrate his birthday and fulfil his knightly mission of ensuring everyone had fun. Both Jessica and Sophie enjoyed watching the show although Mummy got a very wet bottom from sitting on the damp ground (having ensured the girls had something dry to sit on). 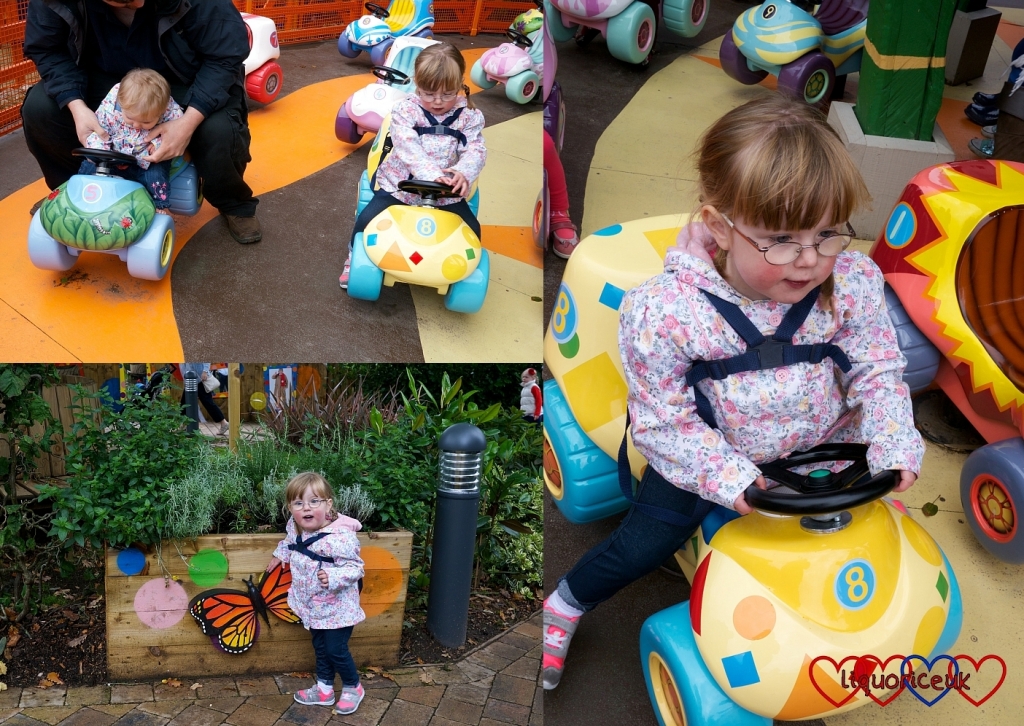 Jessica and Sophie then had a ride on the Numtums Number-Go-Round which was basically a merry-go-round with numbered cars (but had a nice short queue) before we headed over to the CBeebies photo studio for a Postman Pat photo having just seen him driving his red van past us a few minutes earlier. Next stop was the Something Special sensory garden where Jessica enjoyed opening Mr Tumble’s spotty bag and looking for the various insects shown inside it which were hidden around the garden. Nina’s Science Lab was next and Jessica enjoyed exploring the different senses at the various stations around the room (although was really too young to understand much about what they represented). She couldn’t make the thermal imaging handprint work though due to having very cold hands as a result of her heart condition and so Mummy had to put her hand there instead to show her how it worked. 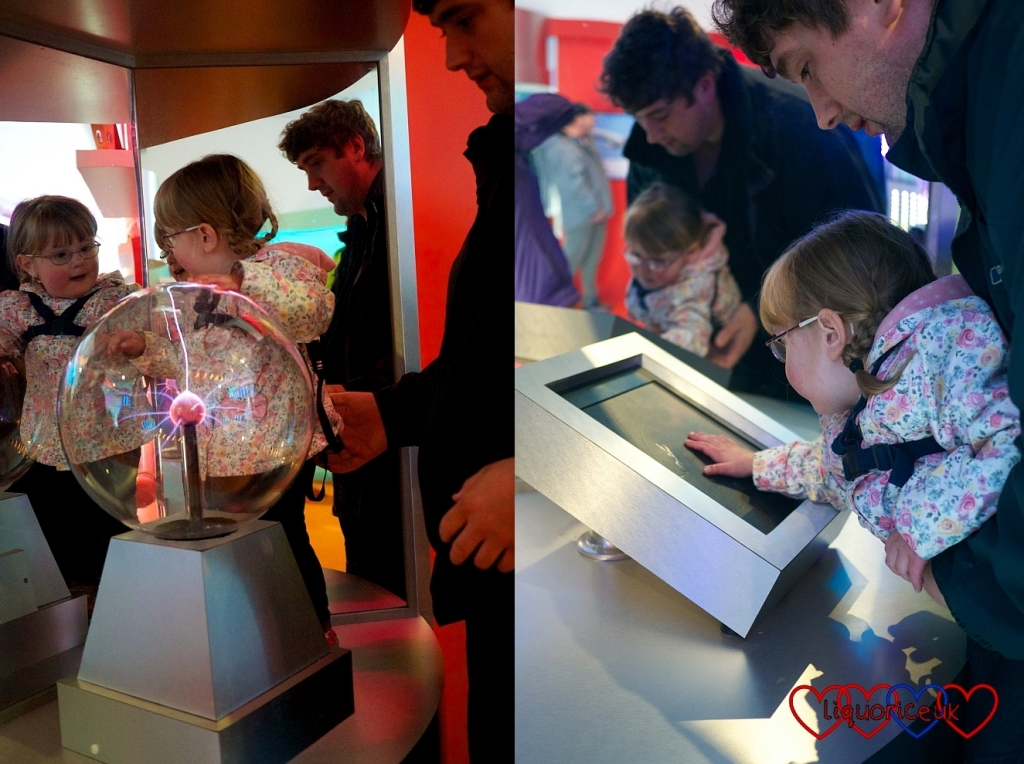 As the ride queues were still long, we decided to stop for some lunch. We had lunch in the Little Explorers Lunch Box restaurant (£4.95 for a kid’s meal (sandwich, fruit, crisps and drink) and £5.95 for a cold meal deal (sandwich, drinks and crisps)). After lunch, we left CBeebies Land for a while and took the Skyride across the park to Cloud Cuckoo Land where the girls enjoyed a ride on the Gallopers Carousel and time playing in the Little Wobble World soft play area. Sophie really enjoyed being able to crawl about and pull herself up to standing here and Jessica loved the soft slide. 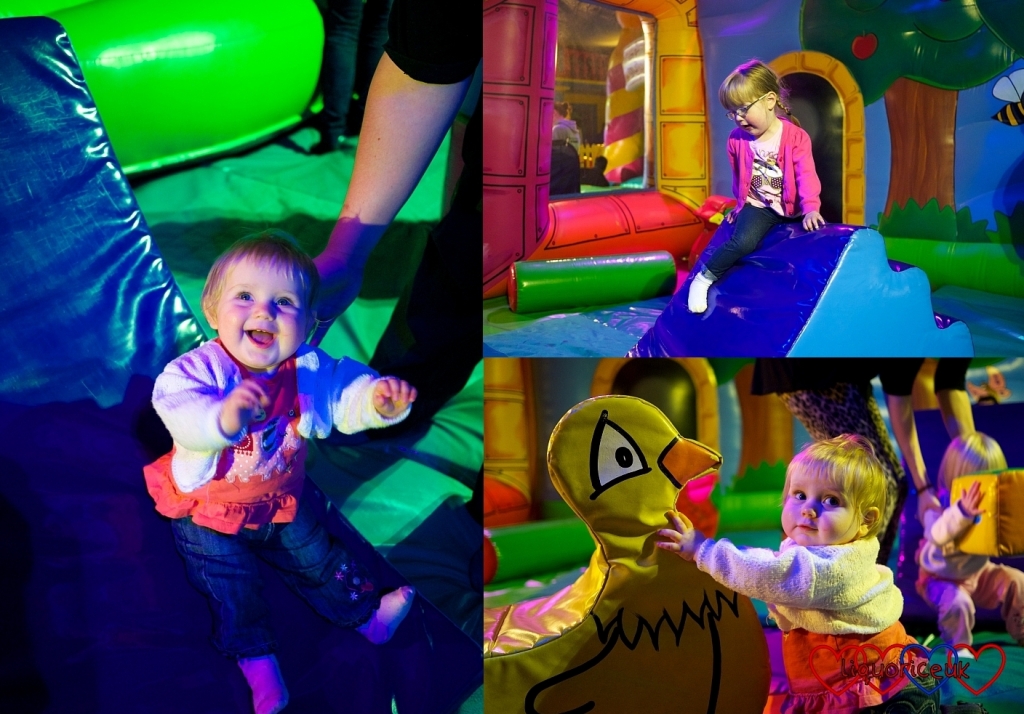 The queue for the return trip on the Skyride was quite long so we walked back through the pretty grounds by the Towers on our way back to CBeebies Land. By the time we got there, the queues were getting shorter and as Sophie was now napping in her buggy, hubby and Jessica got in the 35-minute queue for the Postman Pat ride which Jessica had been asking to go on since we first arrived. She loved ‘driving’ Postman Pat’s van around and seeing the residents of Greendale along the way. In the meantime, Mummy popped in to the shop and found a lovely pair of Upsy Daisy pyjamas for £10 which Jessica will love for her birthday next week. I also bought two pre-printed and stamped postcards at £1 each for Jessica to post in the Greendale Post Office postbox next to the ride and send to Nanny, Grandma and Grandad. 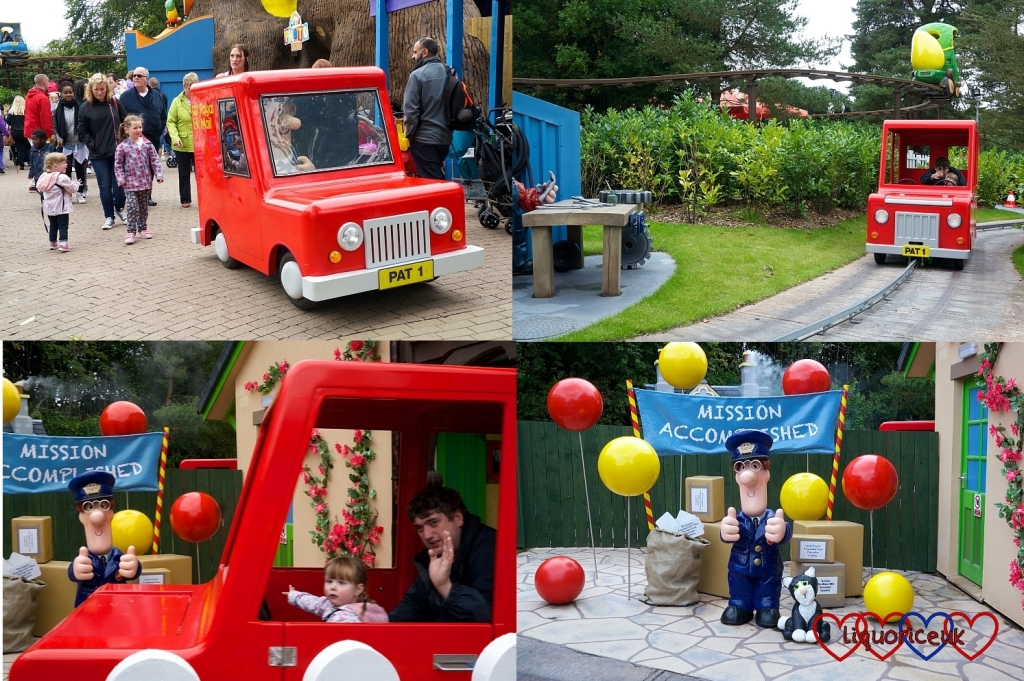 Sophie was still asleep so hubby took over baby-watching and I took Jessica in to Charlie and Lola’s Moonsquirters and Green Drops house where she had fun choosing outfits for them to wear and opening the cupboards to find food to make a meal for Lola’s imaginary friend Soren Lorenson. 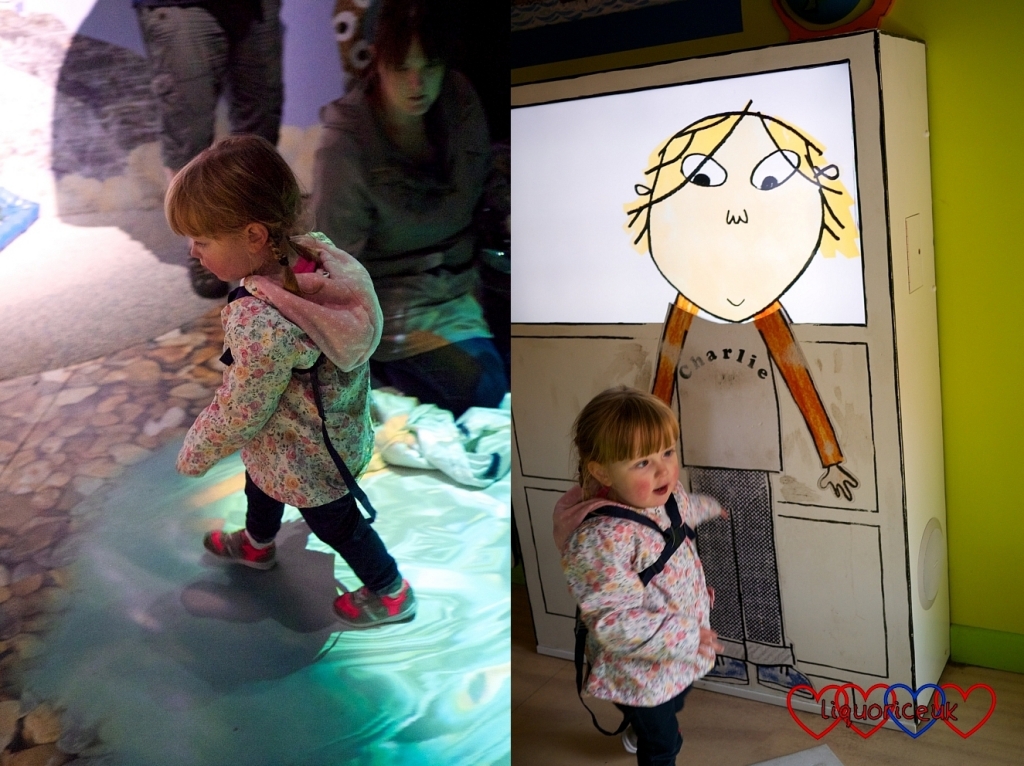 As Sophie had now woken from her nap, we joined the queue for the In the Night Garden Magical Boat Ride. There were a few activities helping to keep the girls entertained whilst we waited and they coped quite well with the fairly lengthy queue as a result. Once on the boat, they both loved seeing all their favourite characters along the journey. 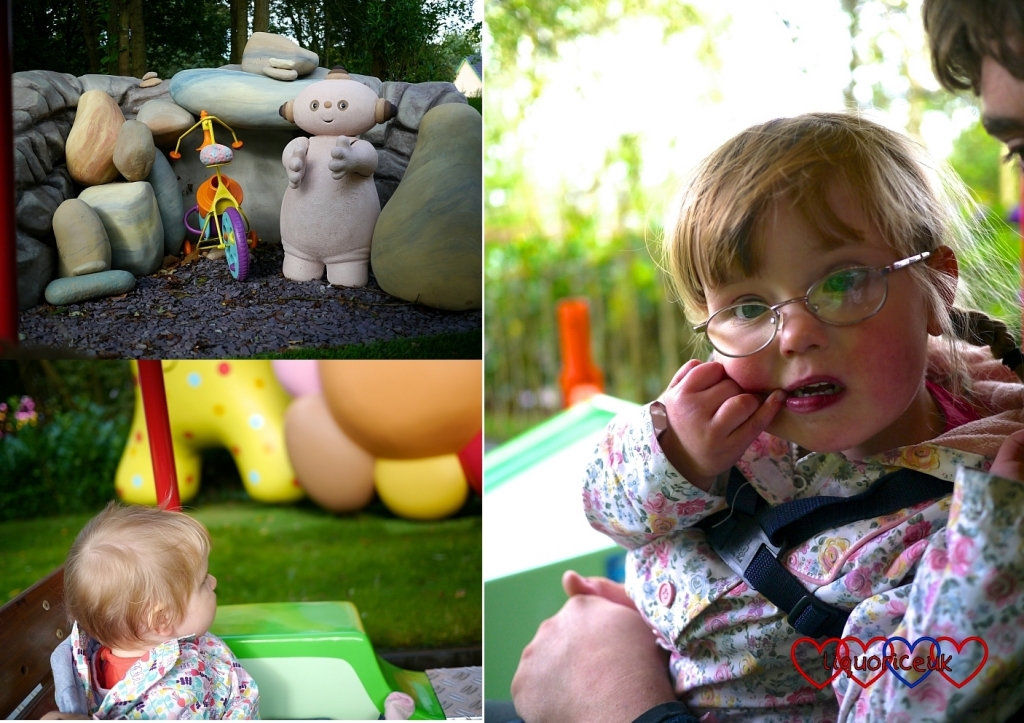 Off the boat and off towards Tree Fu Tom’s Training Camp where we bumped into Tree Fu Tom himself outside. Jessica was very excited about this and she gave him a big cuddle. She was a little too small for the play area inside the training camp so we continued on. There was hardly any queue for Mr Bloom’s Allotment as it was nearly ride closing time and it was just magical. From stepping into the allotment and seeing Compo, the compostarium there – it was just like being in an episode of Mr Bloom’s Nursery. The only difference was that Mr Bloom (seen on video screens) was on holiday and his friend Mr Blossom was looking after the allotment instead. We had to hunt for coloured discs with pictures of food waste to feed to Compo and then went in to meet the Veggies, help them make a ride for the Wee MacGregors and then sing them to sleep. Jessica loved it. I wish I could have taken some pictures but we weren’t allowed to take photos. 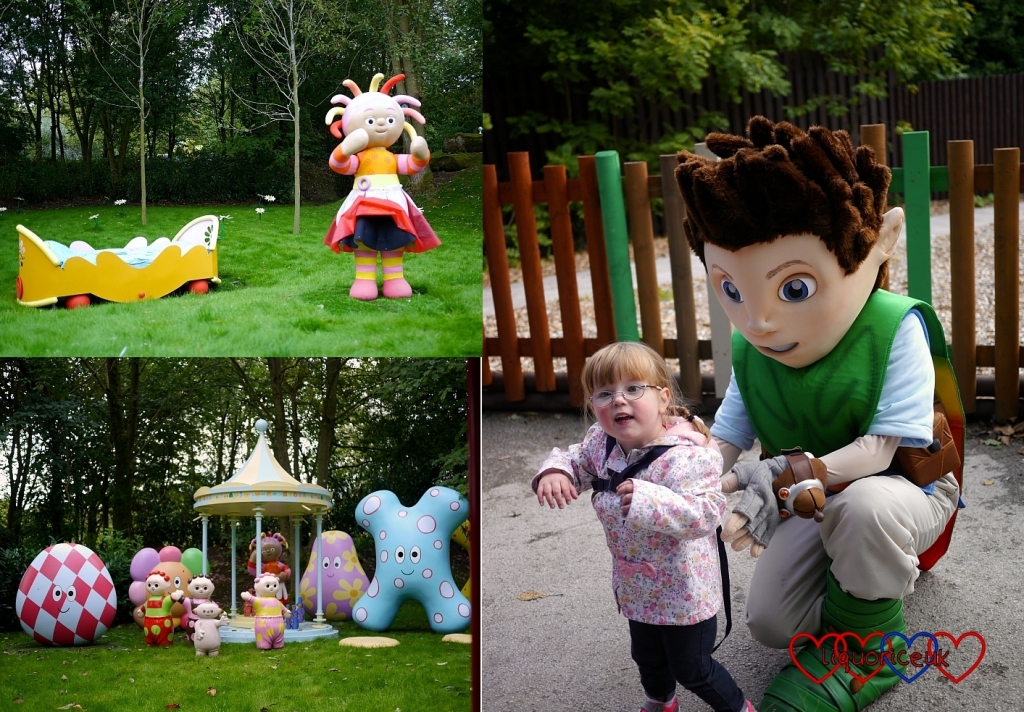 We would have liked to finish up with a ride on the Get Set Go Tree Top Adventure but the rides had closed so it was time to find the car. The monorail to the car parks had a huge queue so we walked back and as the direction signs for our car park (J) seemed to be practically non-existent and we couldn’t see any staff to help us, we walked around the various car parks for a bit until we eventually spotted a sign and got back to the car.

Like most theme parks, Alton Towers is not a cheap day out (£49.20 for adults, £43.20 for children under 4 on the gate plus £6 car parking fee) so would recommend buying tickets in advance (which are cheaper than gate prices) or using vouchers, Clubcard or Nectar points (we used Nectar points to get our two adult tickets and the girls were free). Photos in CBeebies Land cost £10 each (or £15 for two photos) and you also get given a code for a digital download of your photo which makes it much easier for sharing on social media.

Overall, we had a fabulous day with only two longish waits in queues and our two little ones both thoroughly enjoyed their day out. My favourite bit of the day was definitely Mr Bloom’s Allotment – would definitely recommend visiting this if you are off to CBeebies Land.