On our last full day of our stay at Coombe Mill – Boxing Day – we decided to head to Padstow. Grandma had expressed a desire to visit Padstow during our stay. It seemed as good a place to go as any, although the weather wasn’t especially inviting. Cold and rainy. But we had waterproofs and it wasn’t too far to get back to Coombe Mill and dry off again afterwards. 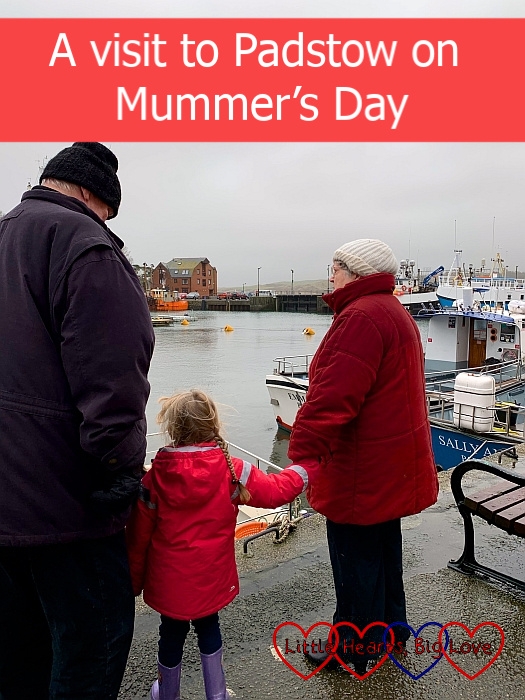 We were a little surprised that the car park was so busy on such a rainy Boxing Day. It wasn’t the nicest weather to venture out in after all. We sat in the car for a few minutes waiting for a break in the rain.

As we’d arrived around lunchtime, our original plan was to stop for lunch and then explore. However with the rain finally easing off and stopping for a while, we decided to make the most of the dry patch for a walk around the harbour. 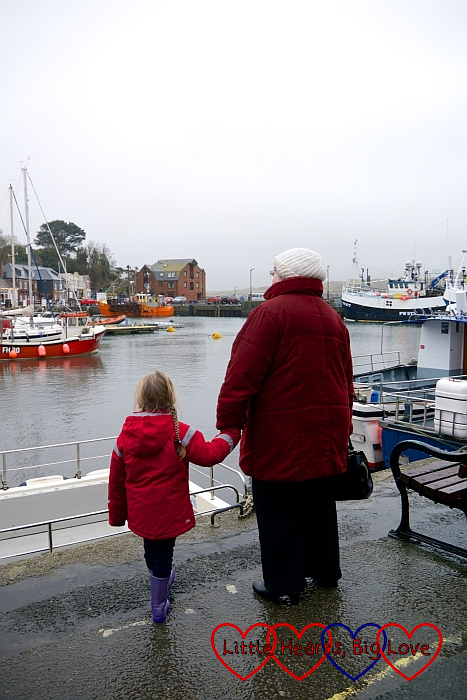 Sophie was a little disappointed that there wasn’t a beach where she could build sandcastles, but otherwise was quite happy looking at the boats around the harbour. We spotted some cormorants diving down under the water to catch fish. I tried to take some photos but they were too quick for me and I only managed a couple of very blurry shots. We walked around the harbour towards the ferry slip. Sophie stopped at the charity wishing well along the way to toss in a coin and make a wish. One of those moments that is always bittersweet; thinking about the one wish I would make if only it could be granted. Oh, how Jessica would have loved this holiday, especially as Grandma and Grandad were with us too. 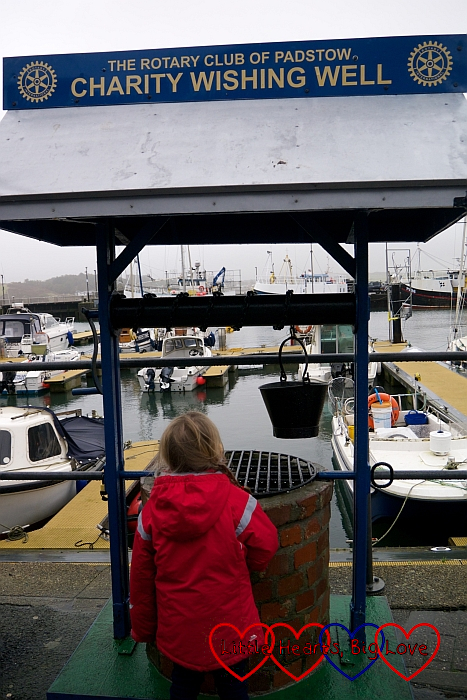 We continued around the harbour to the ferry slip where we watched the ferry pick up some passengers to take them across the Camel estuary to the village of Rock on the other side. 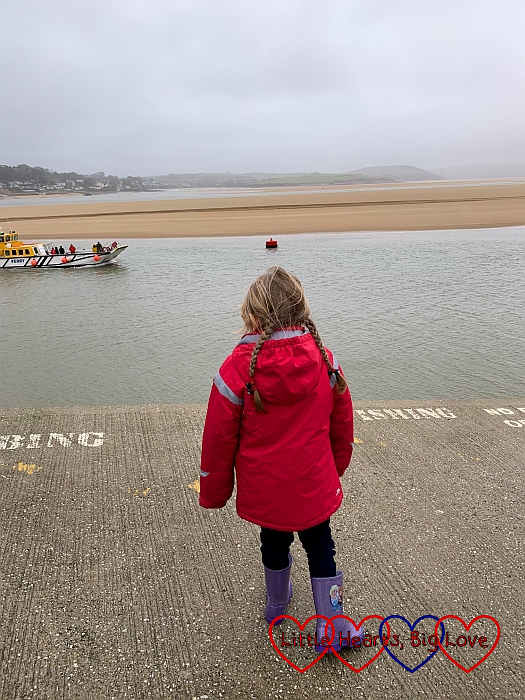 While standing watching the ferry, we heard music coming from across the harbour. As we walked back towards the town, we could see a parade coming towards us. People wearing colourful ponchos, singing and playing musical instruments.  No wonder the car park had been busy. We’d arrived in time to see the Mummer’s Day celebrations. 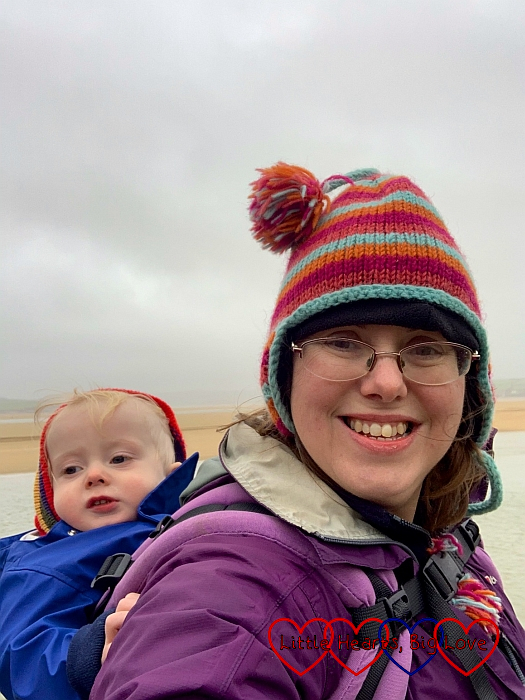 Mummer’s Day is a traditional Cornish midwinter celebration that takes place in Padstow each year on Boxing Day and New Year’s Day. Those taking part often blacken their faces and parade through the streets singing traditional songs. The tradition of blackening faces in this festival is linked to guise dancing, where people would blacken their faces or wear masks in order to disguise themselves. The dark face paint represents the winter solstice. This is in contrast to the white clothes worn to celebrate the arrival of spring at the ‘Obby ‘Oss celebrations in Padstow in May. The festival used to be known as “Darkie Day” (derived from “Darkening Day”). Understandably this, and the practice of blacking up, has caused controversy. While the blackening of faces still continues, the name Mummer’s Day has replaced Darkie Day, and some of the more controversial songs that were sung are being phased out.

Controversial it might be, but it was interesting to watch. In view of the controversy though, I’m only sharing one photo of the parade where the dark face paint on the people passing by is less obvious. 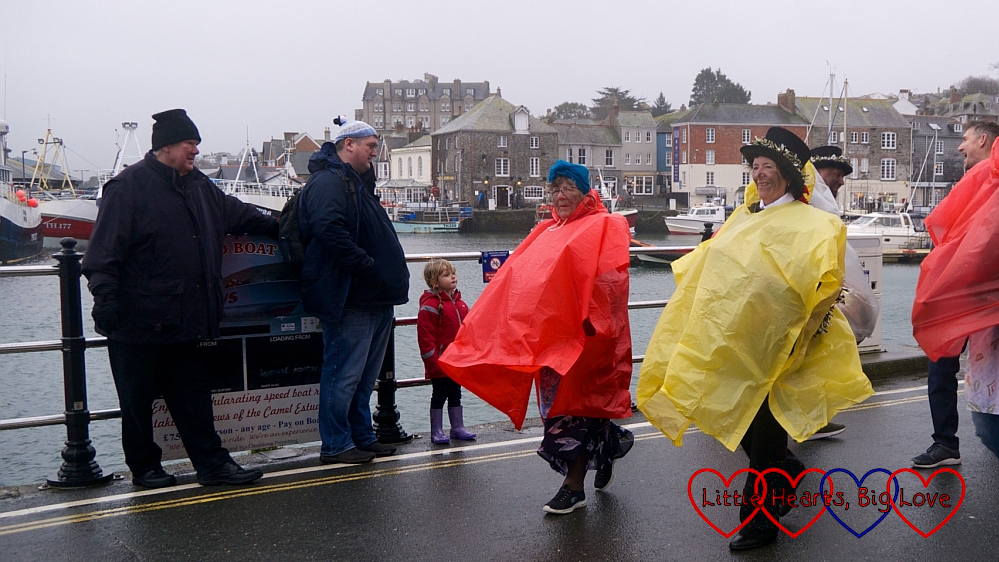 As we continued back towards the town, it started to rain heavily again. It seemed a good point to head inside one of the pubs for some lunch. It was still quite drizzly when we finished though. Had the weather been better, we would have had a wander around the town. However, none of us really had any enthusiasm for exploring in the rain. Sophie was starting to get cold. She’d left her gloves in her puddlesuit back at Coombe Mill. Grandad lent her his ones for the walk back to the car. They looked gigantic on her little hands! 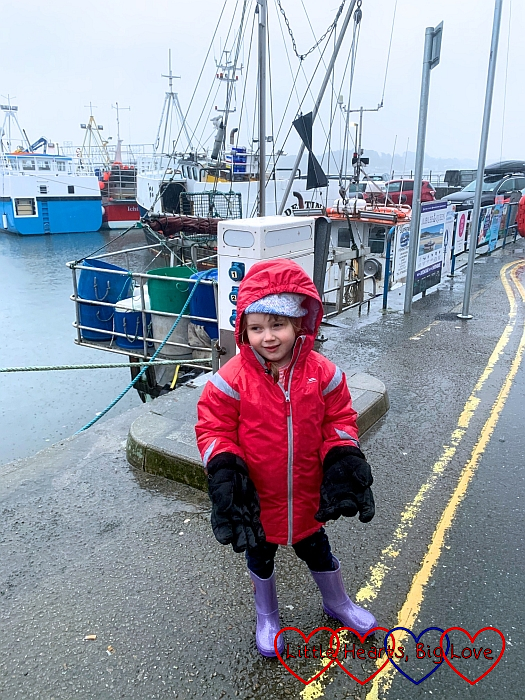 It was nice to get out for a walk though, even in the cold and rain, but nicer still to get back to Coombe Mill, light the fire and warm up with a nice mug of hot chocolate!

6 thoughts on “A visit to Padstow on Mummers’ Day”