Christmas is a tough time for us since Jessica died and we haven’t yet been able to face doing Christmas at home the way we used to. Instead, we headed to Cornwall to spend our second Christmas without Jessica at Coombe Mill. Last year, it was just the four of us, but this year Grandma and Grandad joined us too. It was lovely to get away for a few days and to enjoy an outdoorsy Christmas. 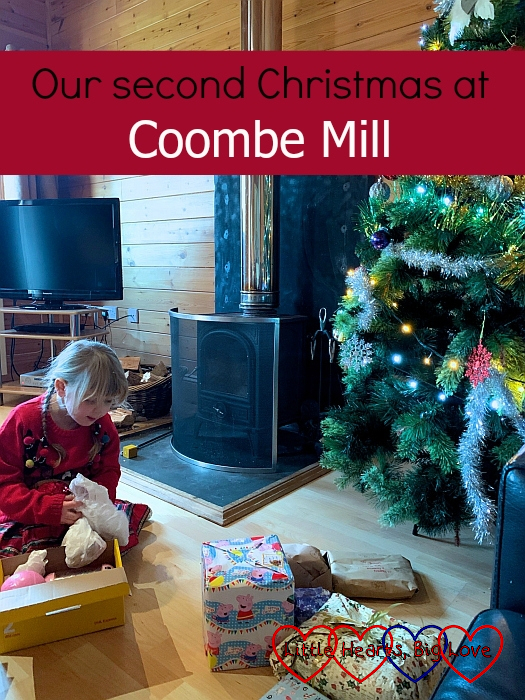 This year we stayed in Heligan Lodge which accommodates up to 8 people. There were two twin rooms and a single room downstairs, and a master bedroom upstairs with an adjoining bedroom, separated by a stable door, which had a toddler bed. This bedroom was perfect for Sophie and Thomas, whose cot was set up here too. We put Jessica’s blanket on the bed in the single room (she had to have her room too) and Grandma and Grandad had one of the twin rooms downstairs.

There was also a playroom upstairs which Sophie and Thomas loved. It was a nice safe space for them to play in, with a gate at the door and gates at the top and bottom of the stairs to help keep them safe. 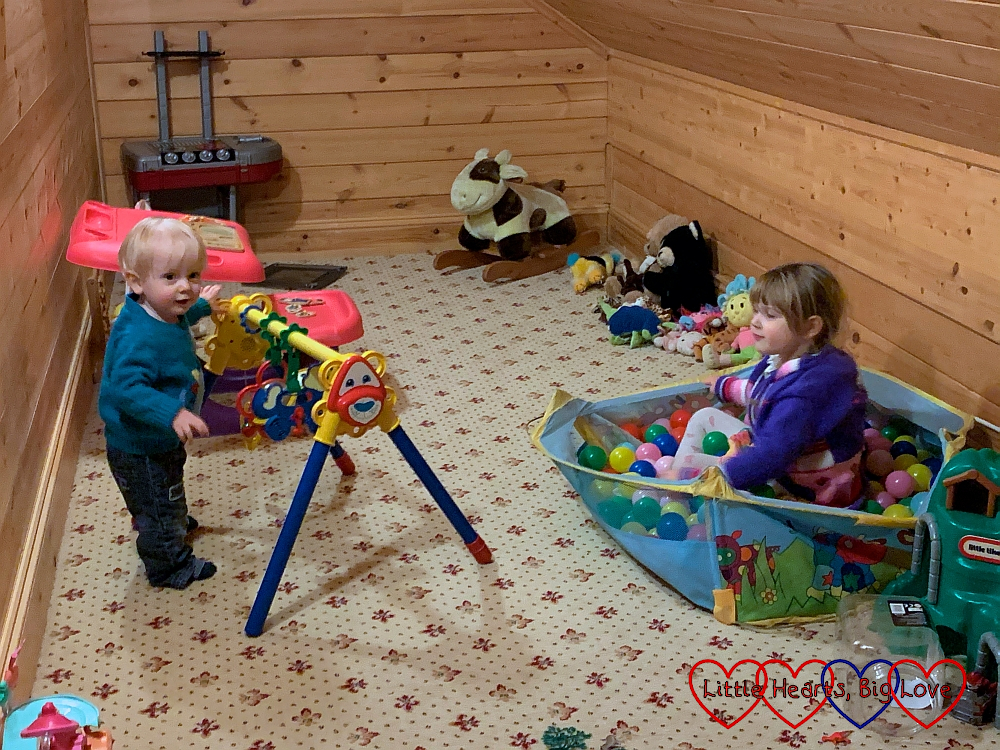 The main living area downstairs was a nice big open area, with a lounge, dining space and kitchen area, overlooked by the minstrel gallery on the top floor, so we could hear the children playing in the playroom (and occasionally got bombarded by the balls from the ball pit which Thomas liked to throw over the gate!). The wood-burner (with fire-guard) made it very cosy and Sophie loved decorating the Christmas tree on our arrival. We brought a couple of special decorations with us, in memory of Jessica, to add to the tree. 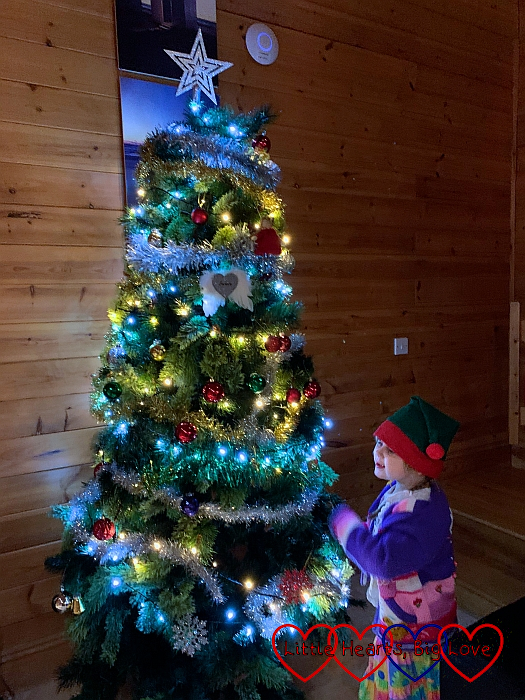 The morning feed run was the highlight of our stay. Getting out first thing in the morning to feed the animals was a wonderful way to start the day. It was lovely to see Thomas being able to join in this year. He absolutely adored the goats and the sheep. 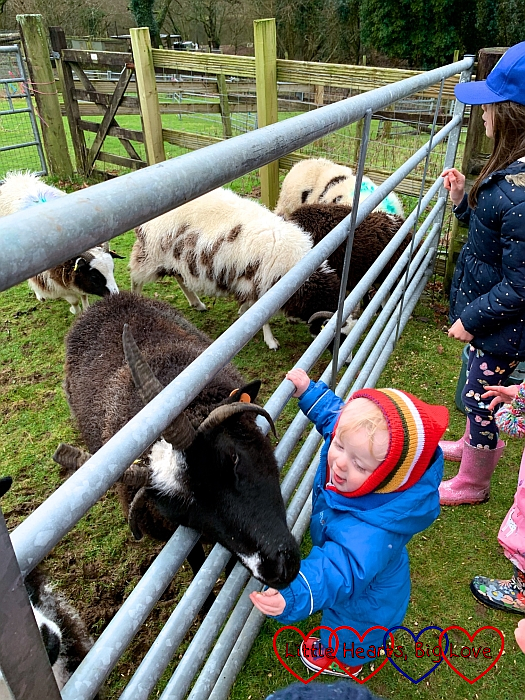 Sophie also enjoyed herself. She was more confident around the animals this year, and particularly enjoyed feeding our vegetable scraps and leftovers to the pigs. 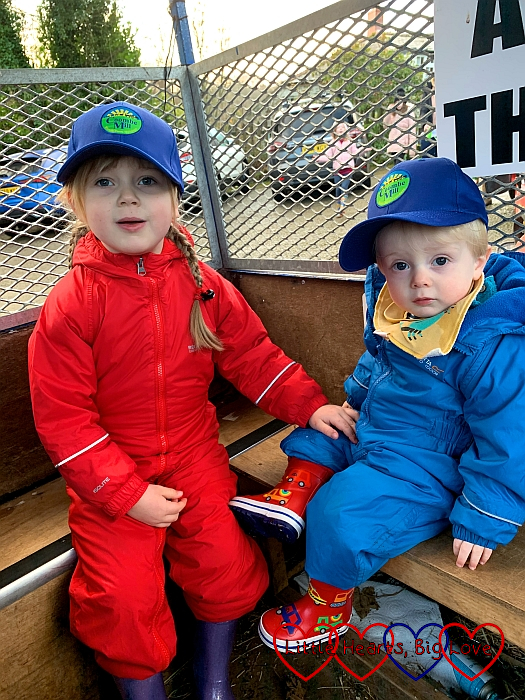 There were a few other blogger families staying over Christmas, including Herne Hill Mum, Crazy With Twins and Chocolate Is Not The Only Fruit. It’s always lovely to meet other bloggers, and get to know them a little better. It was also lovely to watch the children interacting with each other and making friends so easily. Crazy with Twins’ twin girls were quite friendly with Sophie and were lovely with Thomas. There were a couple of moments when they were competing a little over who was going to sit with him in the trailer. It gave me a little glimpse into what life might have been like with two big sisters looking after him. 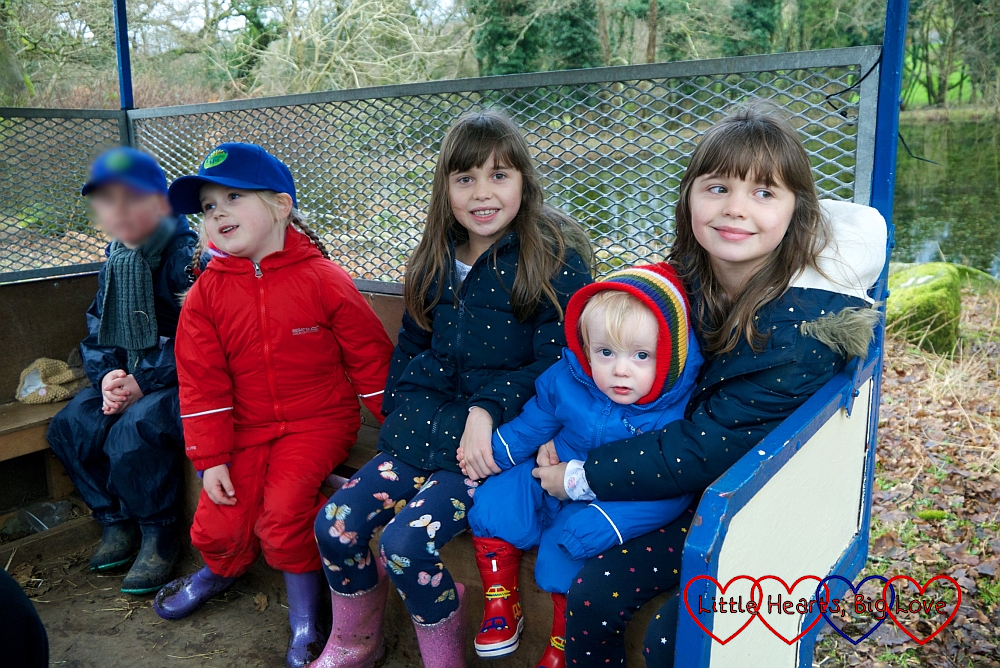 Sophie loved taking part in activity hour on Christmas Eve. She helped make some mince pies and we took one home for Father Christmas. I’d forgotten to buy mince pies as none of us really eats them so that was handy! Sophie also had fun making a snow globe to decorate our table for Christmas dinner. 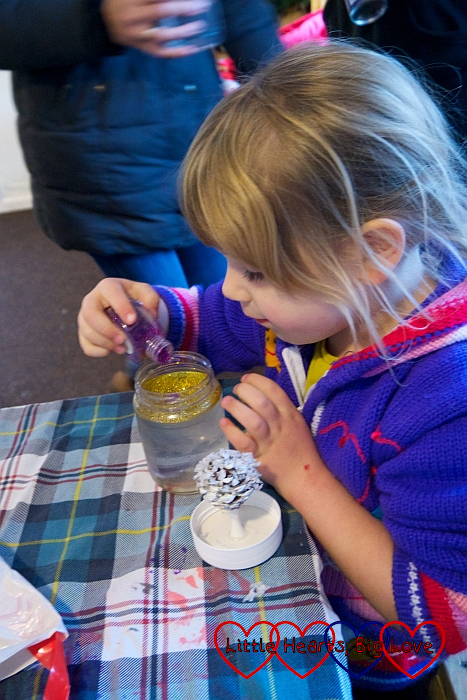 We then headed to St Tudy, the next village, for the Christingle service. After the service, Sophie was very excited to see Father Christmas outside in his sleigh while the adults got to enjoy some mulled wine and mince pies. 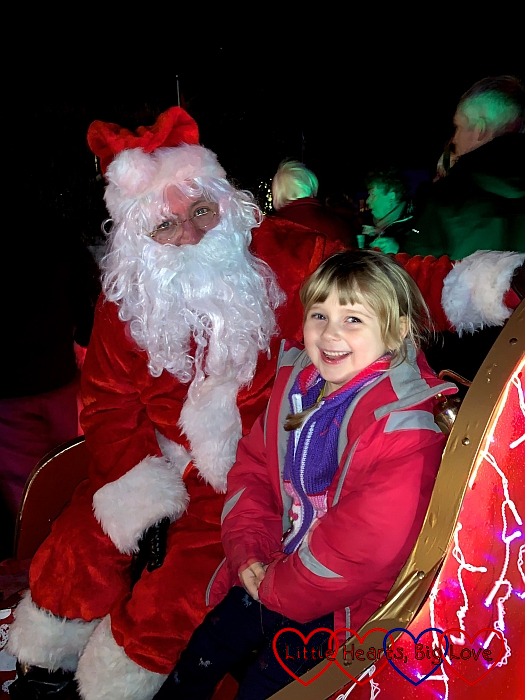 Back at Coombe Mill, there were drinks and nibbles, and the chance to chat more to some of the other guests. The children were called in to see Father Christmas in his grotto and received a present each. What a busy Christmas Eve it was for him – and he still had to get out and deliver all the presents too! 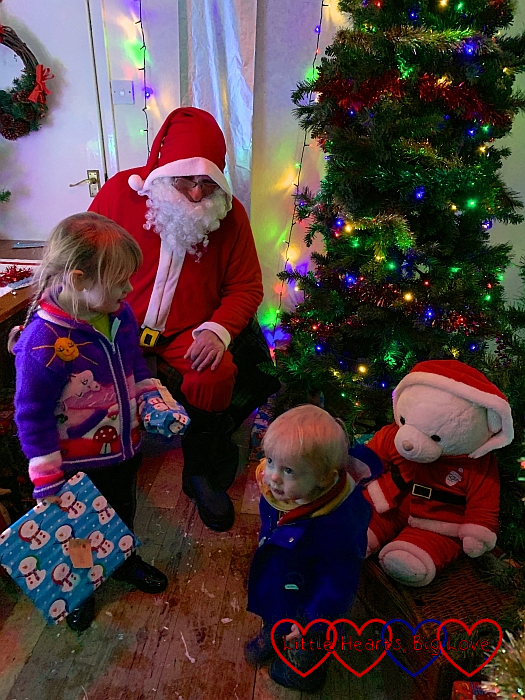 One good thing about all the activity of the day was that Sophie had no problem falling asleep that night despite the excitement and anticipation for Christmas morning.

After all the activity of Christmas Eve, the children slept in until 7am which was a very civilised time to start Christmas Day. Thomas wasn’t quite sure about what to do with the wrapped presents in his stocking though. Sophie opened them for him. She ended up with three stockings to open, as Father Christmas filled Jessica’s one too.

Grandma joined us on the Christmas morning feed run. Afterwards, we had a little wander around the fairy garden before heading inside to open presents. 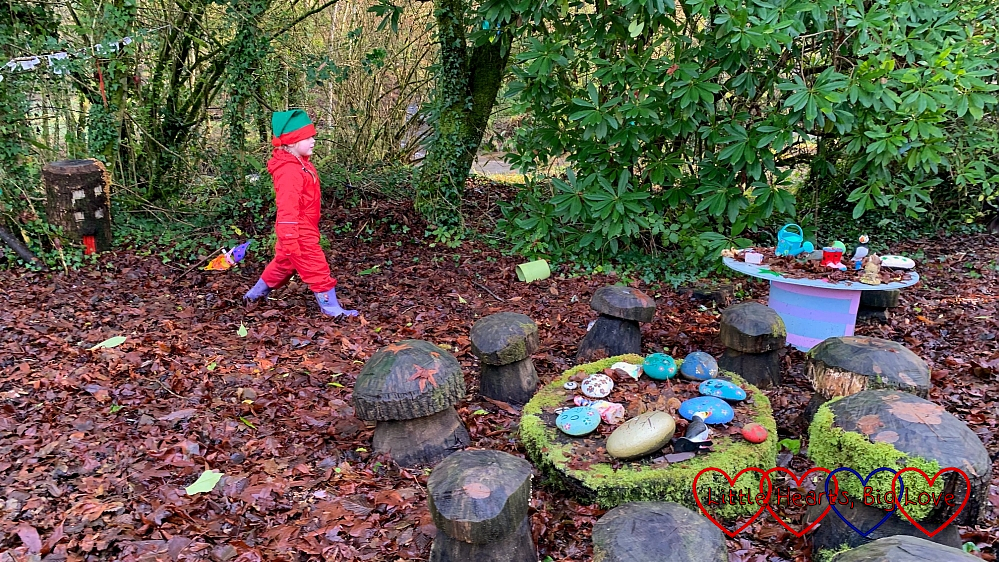 As lovely as it was watching the children having fun opening their presents, it did of course bring that ever-present sadness to the surface. Jessica is missed every second of every day but especially so at times like this. 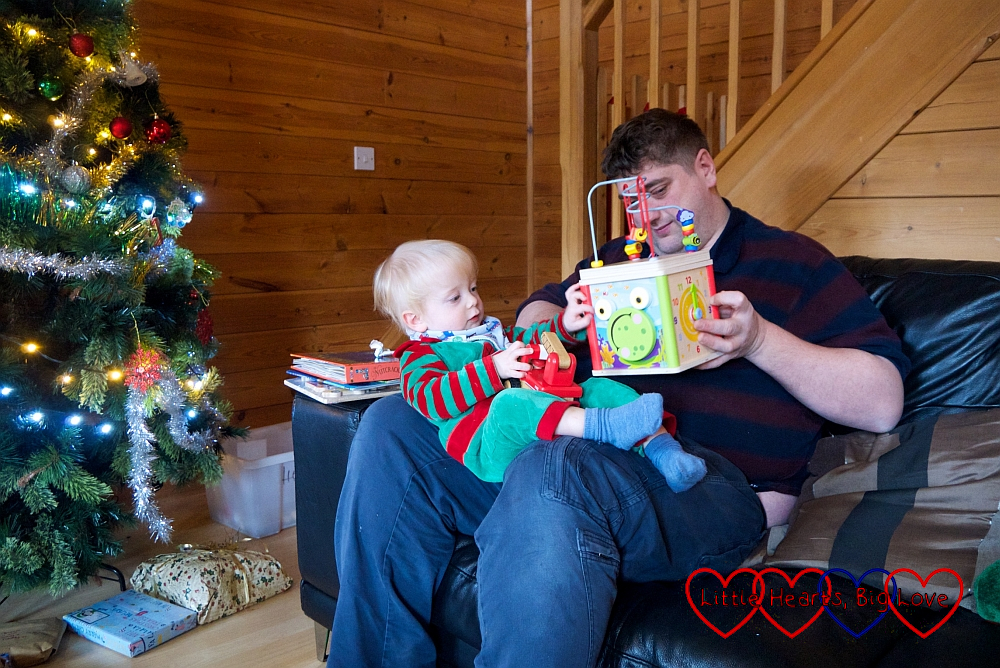 Getting outside after the presents were opened was a good distraction. Sophie had a wonderful time in the play area. She spent ages making various concoctions in the mud kitchen and also enjoyed digging in the sand pit. And while I was watching her having fun playing, a little robin flew down on to a nearby tree stump and watched for a while too. A reminder that Jessica is still with us. 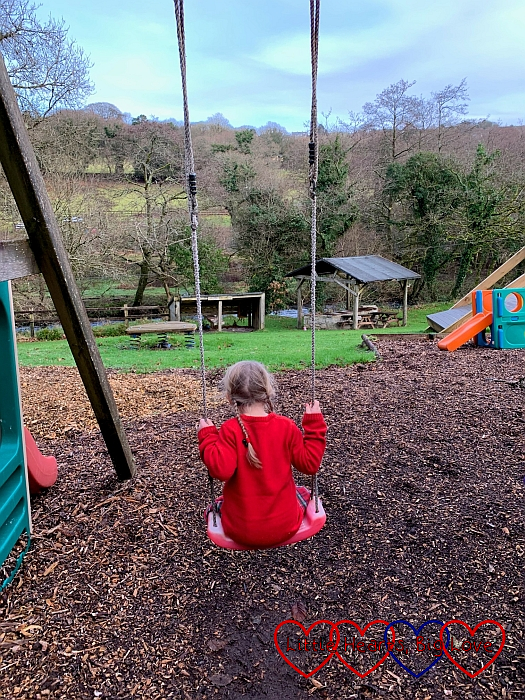 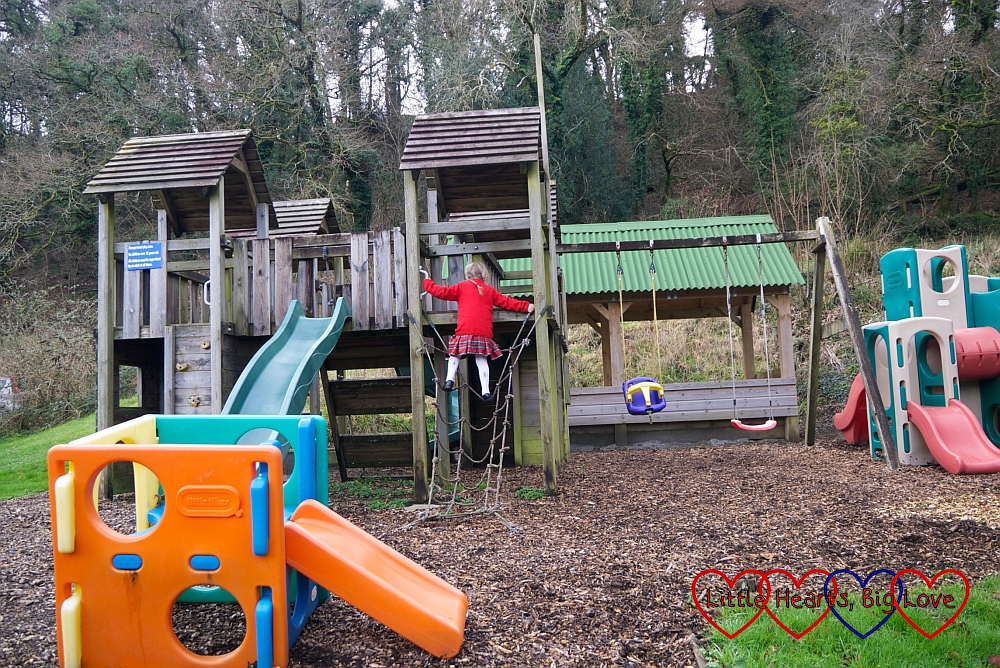 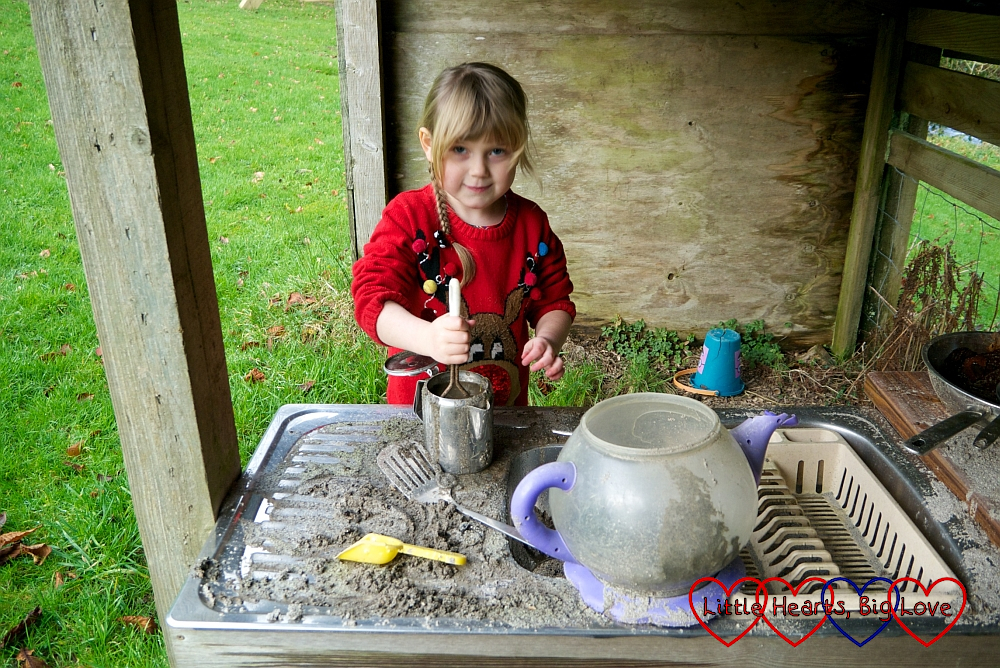 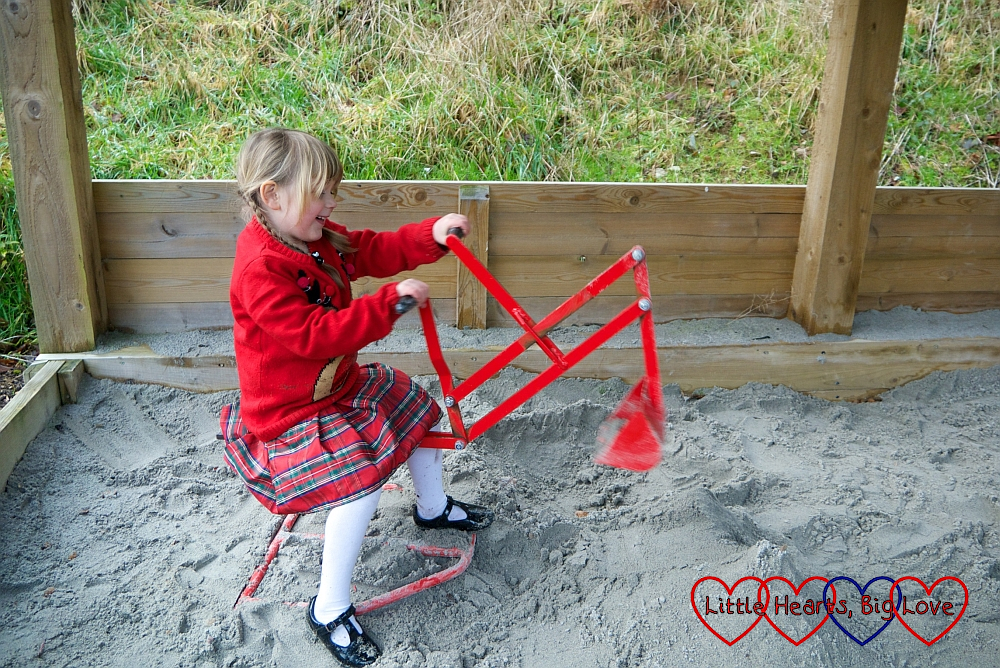 We’d been lucky with the weather on Christmas Day, which had been a beautiful dry, crisp and cold day. Boxing Day was very soggy though! It didn’t put us off joining in the feed run though. After the feed run, the children had fun in the indoor soft play barn. Thomas loved the ball pit. 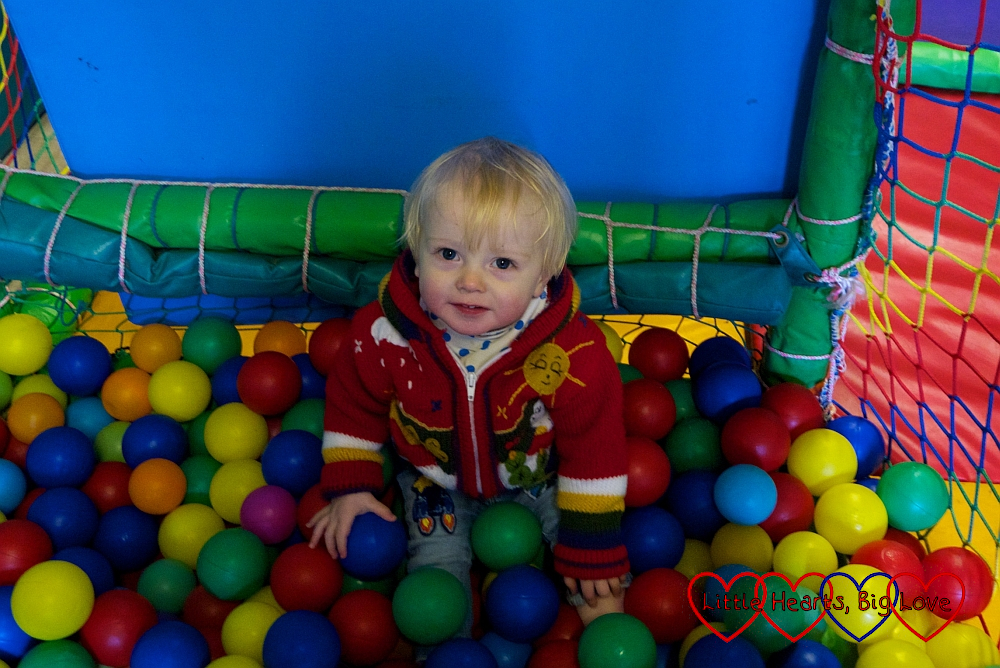 On our final day, there was just enough time for a quick go at the crazy golf after the feed run, before packing up to head home. 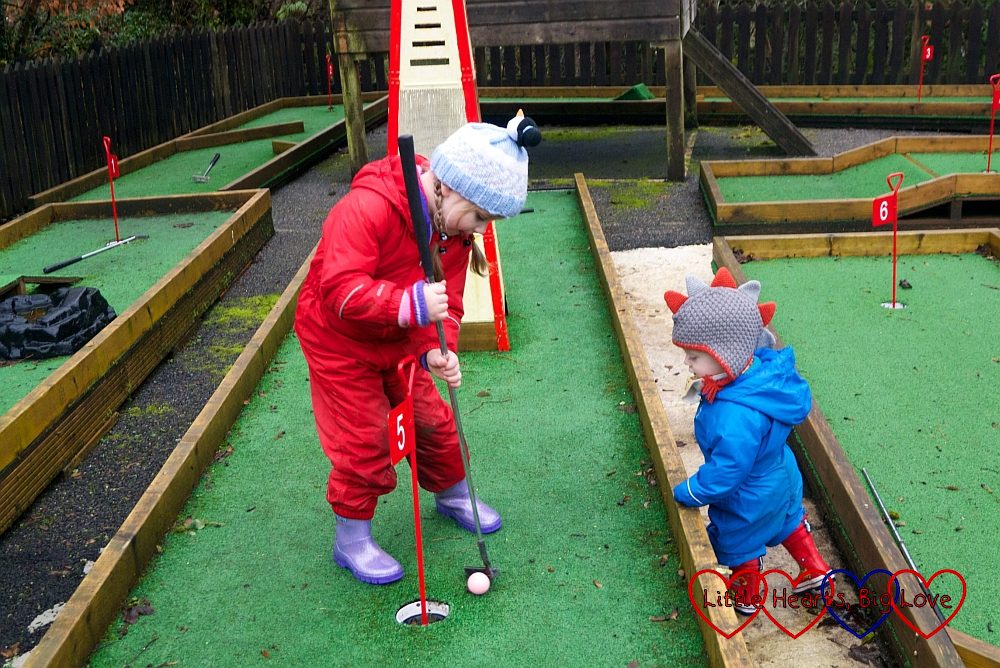 We all had such a lovely time. Coombe Mill at Christmas is such a magical place. It was good for us to get away. We made fun memories with Sophie and Thomas while still taking time here and there to remember Jessica and allowing  ourselves to grieve for her. She would have loved Coombe Mill. I wish she could have been there with us too.

12 thoughts on “Our second Christmas at Coombe Mill”