Normally, I would have booked a few activities for October half-term, but this year there were very few outdoor activities taking place due to Covid-19 restrictions. We were glad to find a scarecrow trail taking place around Denham and Harefield which gave us a nice focus for getting outdoors over the half-term break. 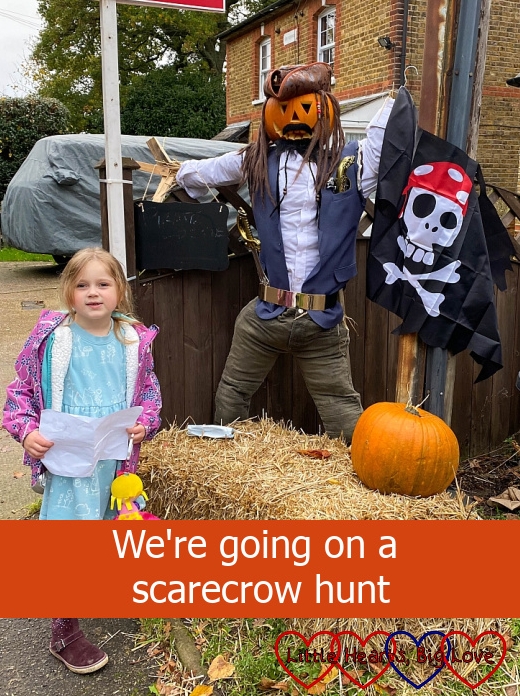 The scarecrow trail was created as a fundraiser for Michael Sobell Hospice. Once we made our online donation (the suggested donation was £2.50 per family/car), we received a link to access the maps and a list of scarecrows in each village. There were more than 70 scarecrows to find in total, spread across various areas in Denham and Harefield. Too many to find in one day, but a nice number to spread out over the week and encourage us to get out for a walk each day. 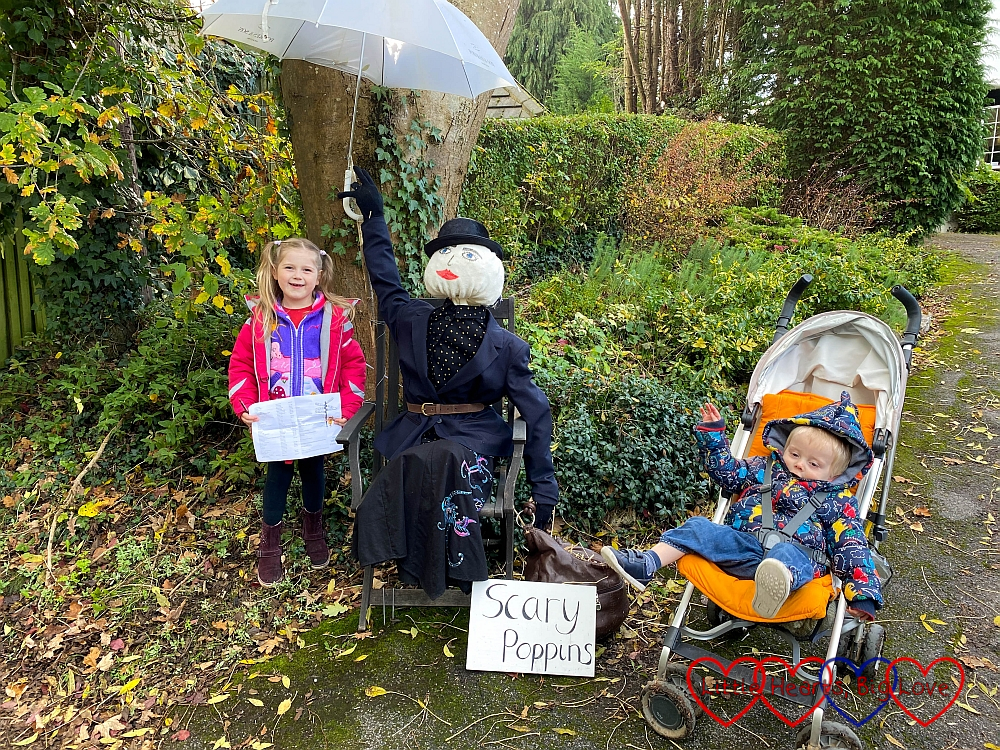 The maps gave an approximate location of each scarecrow based on the postcode and there was an occasional clue on the list to help us find them. Most of the time this worked well with getting us to the right place. However, there were a few times, particularly on the longer roads, when the postcode didn’t take us to the right place and there was either no clue or one that was too vague to be helpful. It would have helped to have more specific location details for a few scarecrows. There were a couple that we failed to find in spite of walking up and down the road more than once in search of it. We weren’t sure if they weren’t there or if we just didn’t spot them. 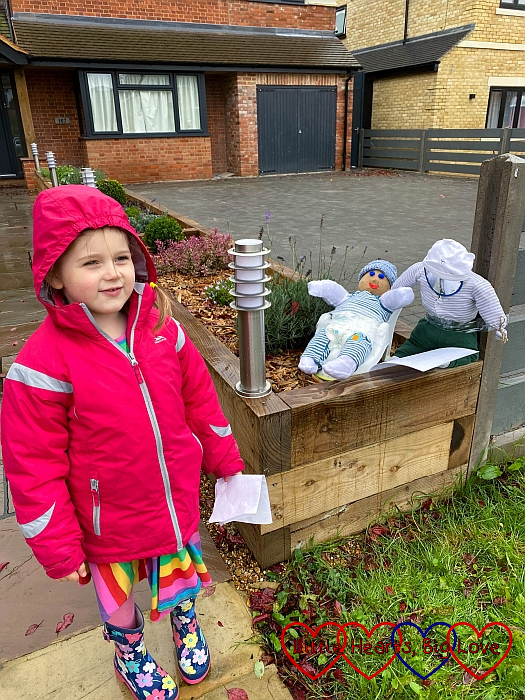 Occasional niggles over location details aside, we enjoyed our scarecrow hunt. It took us five days to work our way through all the locations on the list. We started off our hunt in Denham Country Park and managed to cover Denham village, Higher Denham and New Denham on the first day, ticking seventeen scarecrows off the list. 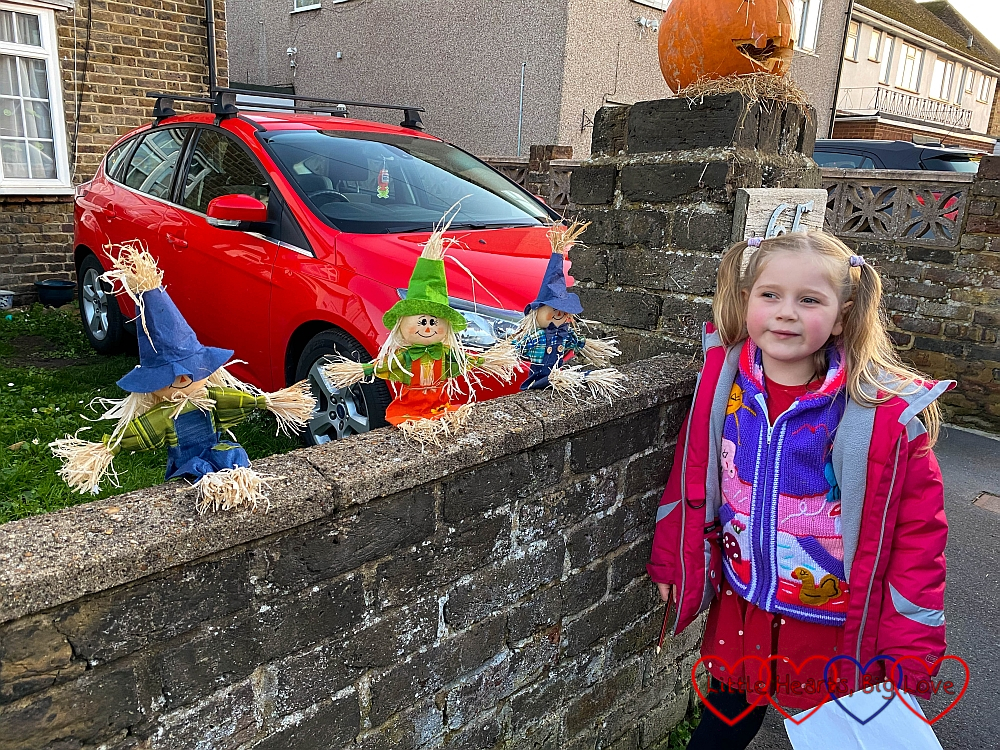 Day 2 was Sophie’s birthday. It wasn’t the nicest weather for getting out but the prospect of finding more scarecrows was a good incentive to get our waterproofs on and get outside for a while. Sophie was particularly keen to try and find Rapunzel and Olaf which were both in Denham Green. I had hoped that we would finish off the scarecrows in Denham, but Sophie decided she had had enough after a couple of hours, having found eleven that day. 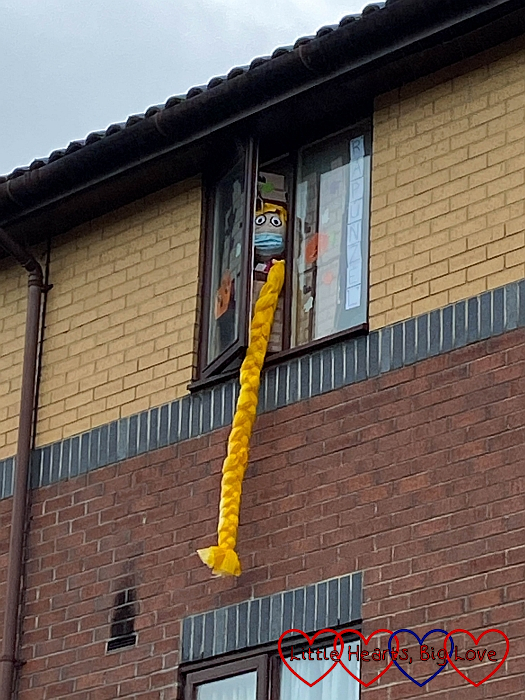 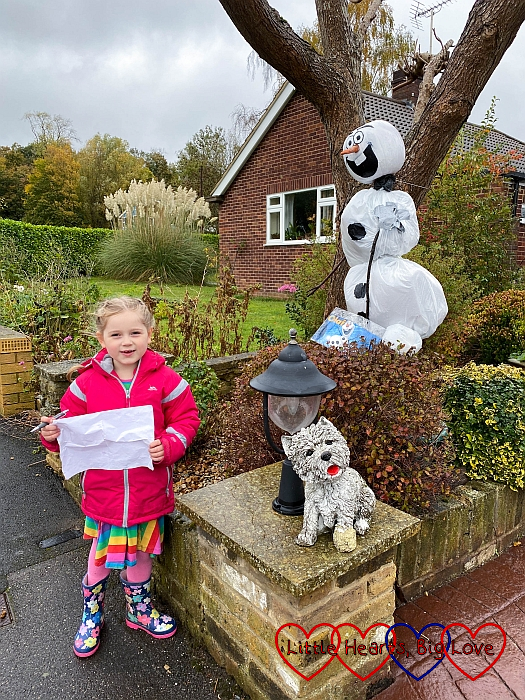 We only had a short time to get out for scarecrow hunting on day 3. Thankfully the seven remaining scarecrows in Denham Green were fairly close together and we managed to find them all fairly easily. There were three scarecrows on the list that we hadn’t managed to find but we’d found a couple that hadn’t been on the list so we were doing well. 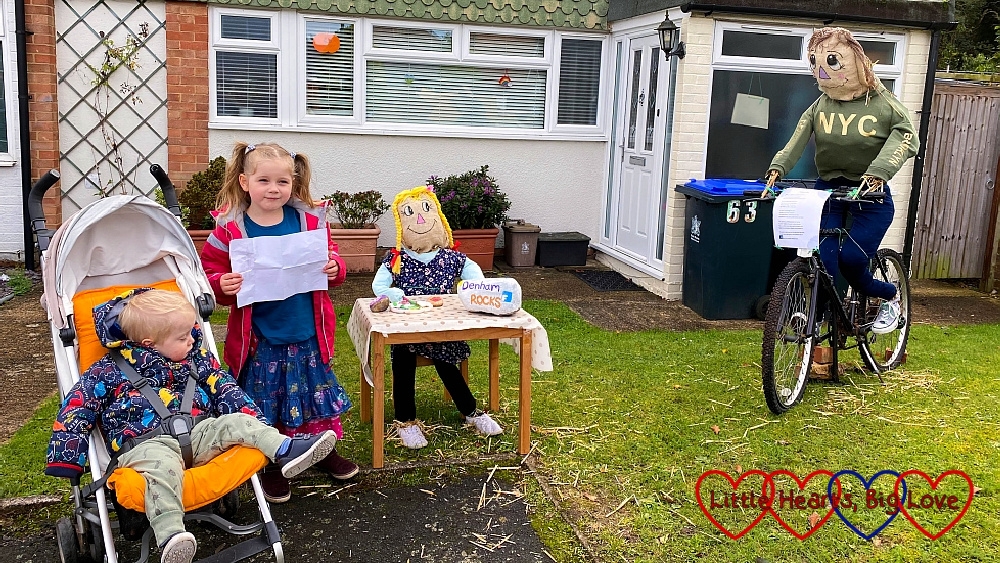 With Denham done, we headed into Harefield for our fourth day of scarecrow hunting, ticking off nineteen scarecrows. It was getting dark by the time we called it a day and I wasn’t sure if we were starting to miss scarecrows that might have been taken in for the night. 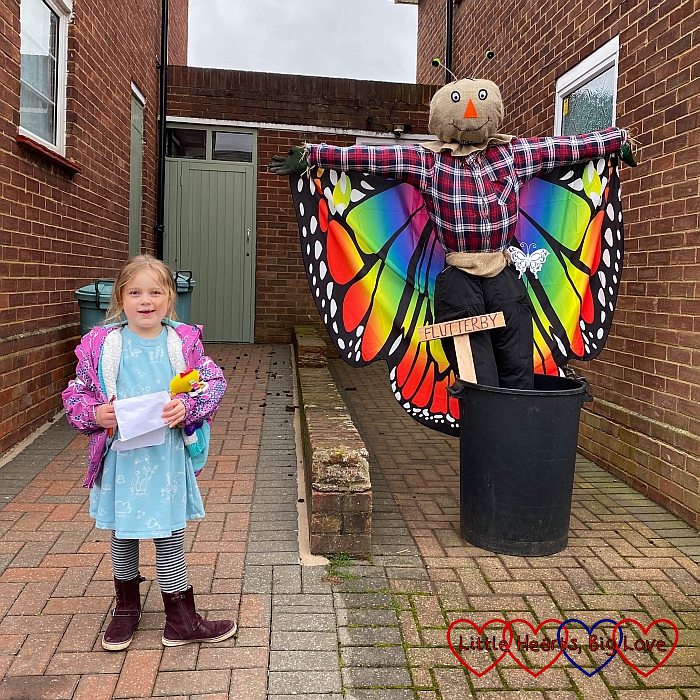 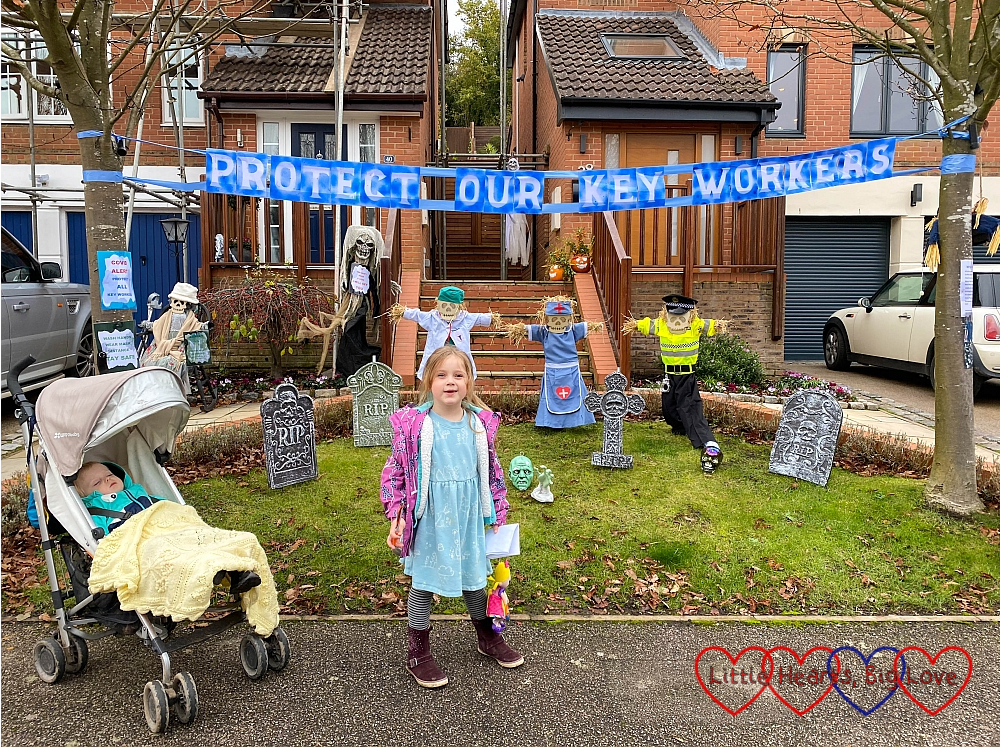 We retraced our steps for the start of our final day and managed to find two scarecrows that we hadn’t spotted previously. I think some of the scarecrows must have been taken indoors late in the afternoon as they definitely hadn’t been there when we’d looked first time, and one of the ones we had spotted on day 4 wasn’t there when we retraced our steps on the final day. 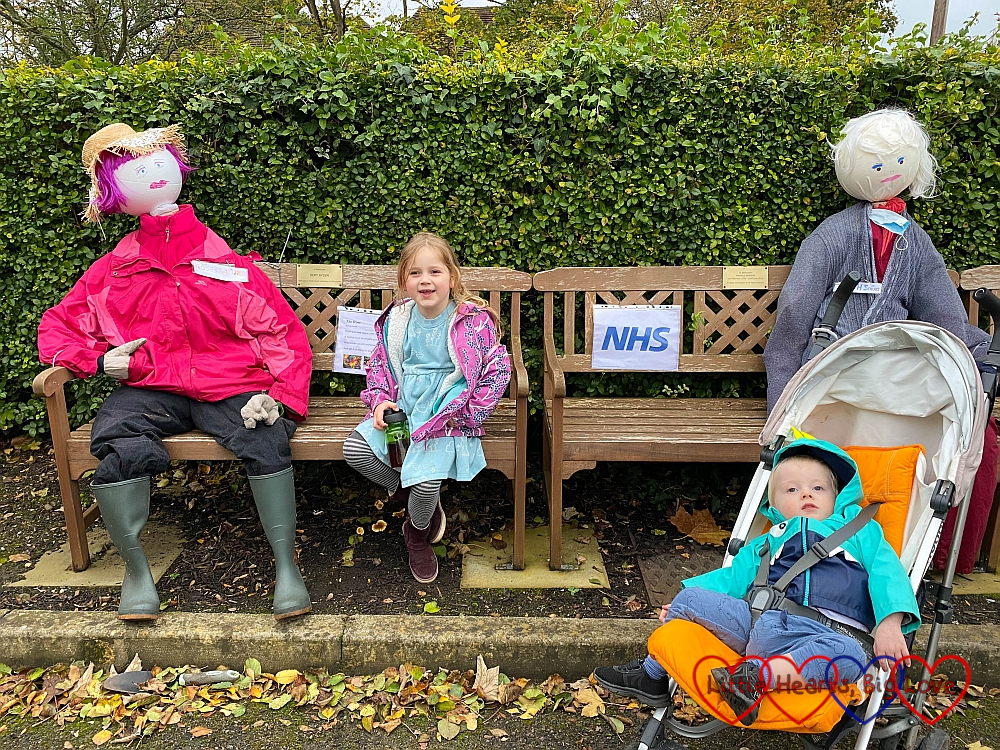 We found fourteen scarecrows on the last day to finish off the scarecrow hunt. As with Denham, there were a couple of scarecrows that we hadn’t managed to tick off the list in Harefield but Sophie was happy that we’d found as many as we could. 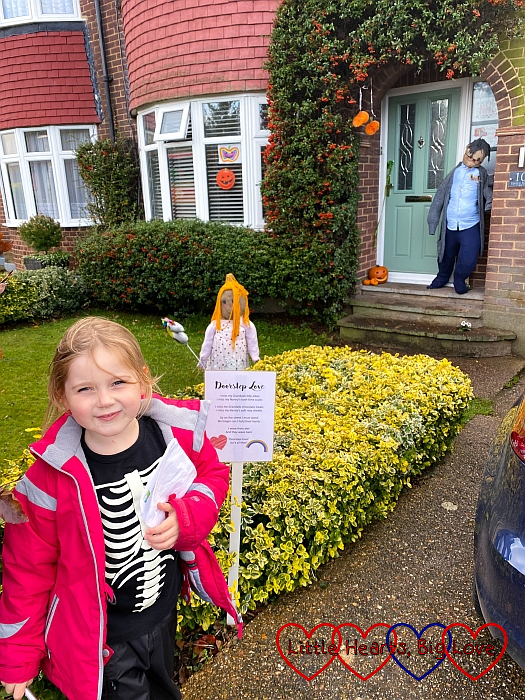 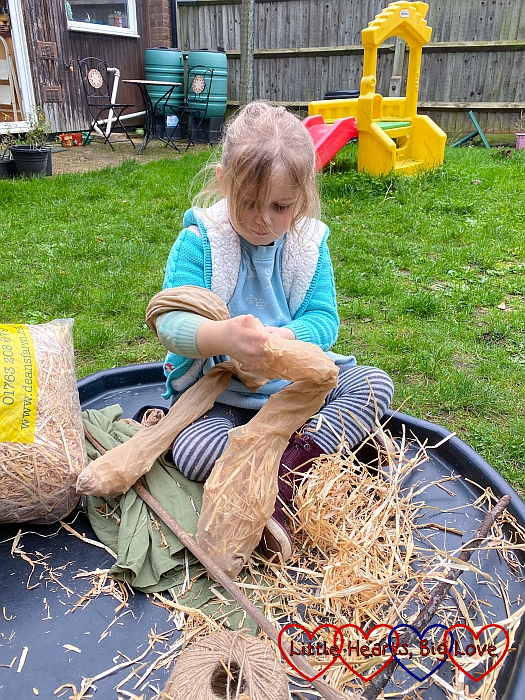 We had fun making our own scarecrow using old tights for her arms, body and legs, and a carved pumpkin for her head. Sophie wanted to call her ‘Jessica’ and put her outside our front door at Halloween. I love that the scarecrow hunt inspired her to want to make her own. It brought back memories of an afternoon when we’d made a scarecrow together as a family with Jessica. I think Jessica would have approved of Sophie making a scarecrow and naming it after her. 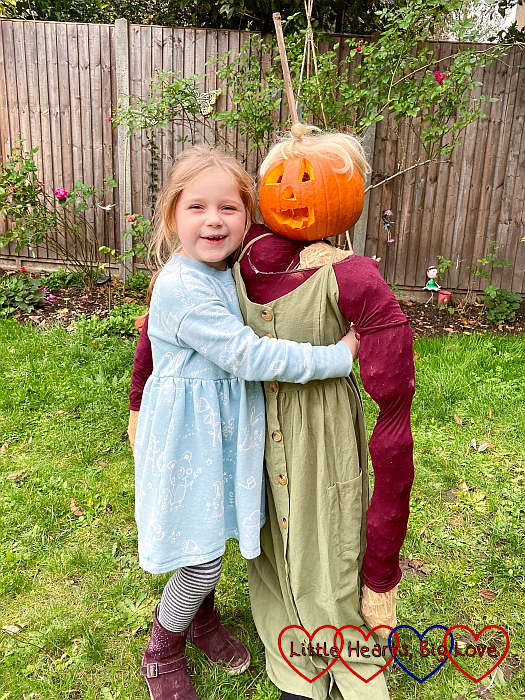 5 thoughts on “We’re going on a scarecrow hunt”