Langley Park is one of our favourite outdoor spaces – the Temple Gardens are full of magic and adventure if you only know how to find it. Add two little girls – one dressed as Little Red Riding Hood and the other dressed as a pirate – and a walk in the park becomes a fairy tale adventure to find the Big Bad Wolf. 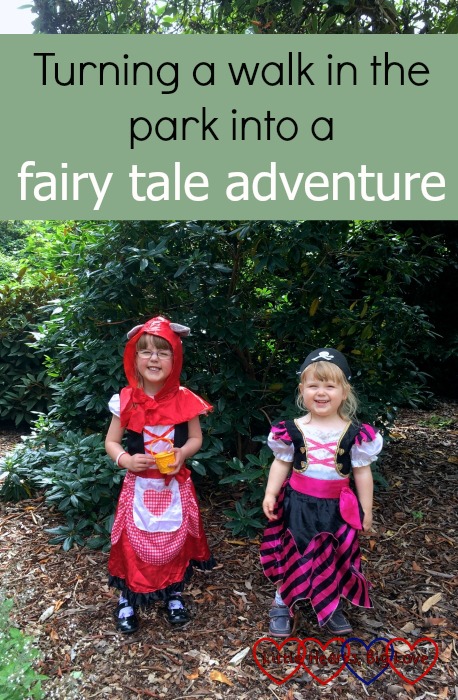 As usual, I let the children decide the route through the gardens. I knew where we would be heading though – the big yew that we call the “magic tree.” It certainly lives up to that name. Slides for fairies (and toys!), lovely low branches to climb and a trunk that you can explore the inside of – what more could you want?  Could this be a hiding place for the Big Bad Wolf? No, but it was a good spot to stop and investigate. 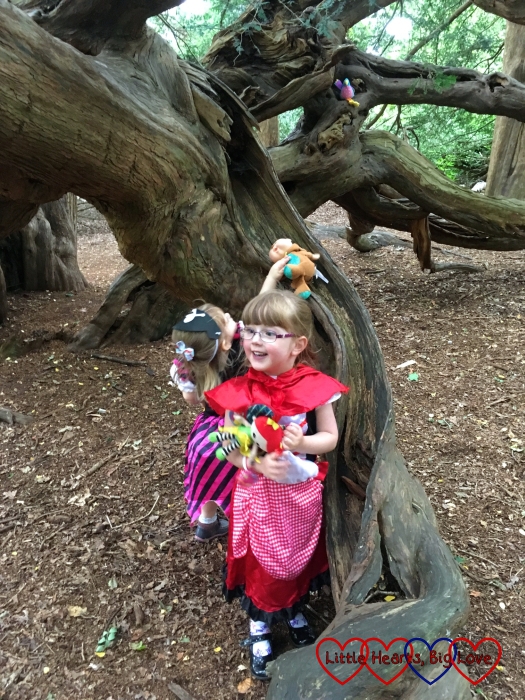 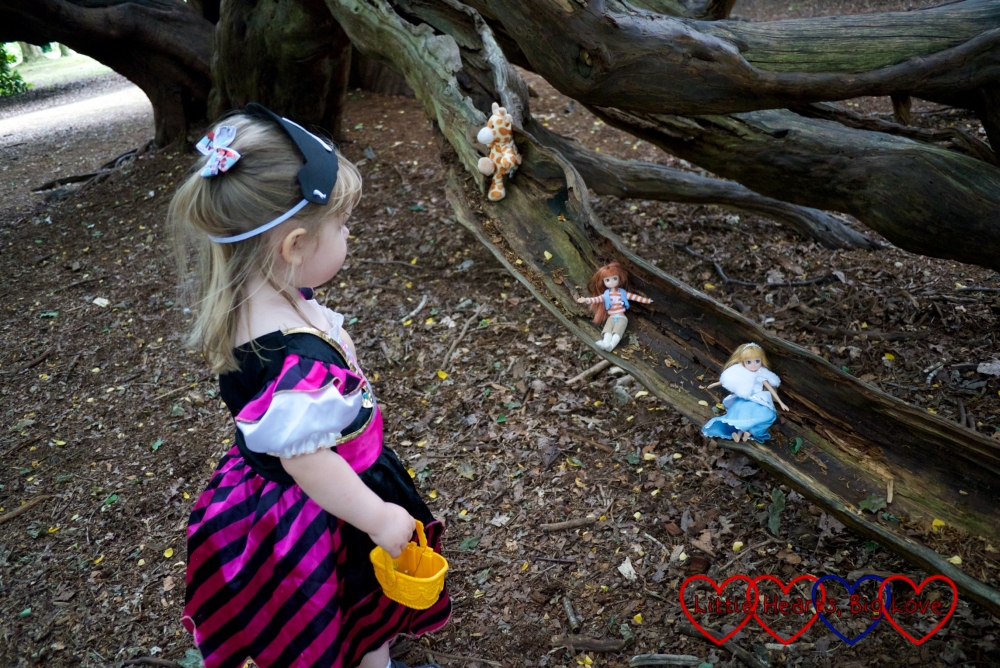 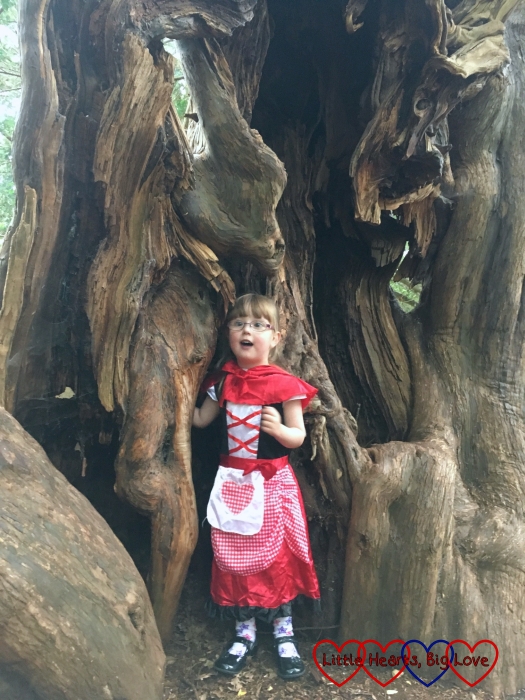 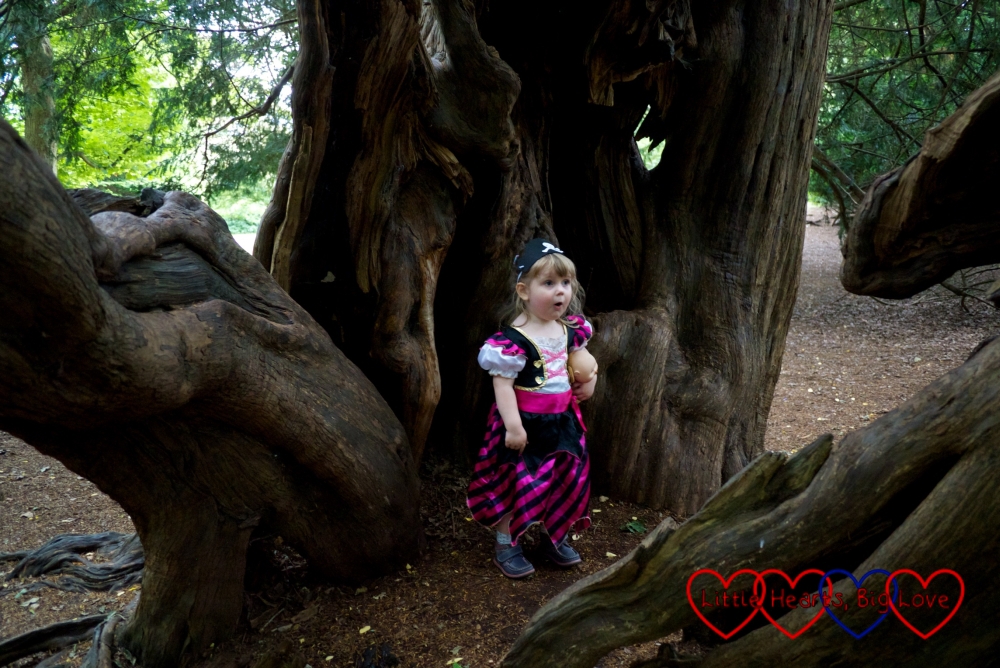 We took a break from our adventures for a picnic with the cakes we’d baked the previous day. The girls didn’t stop for long though!  They had spotted some piles of cut grass scattered around and set to work.  The “straw” was perfect for making nests and beds for their toys. 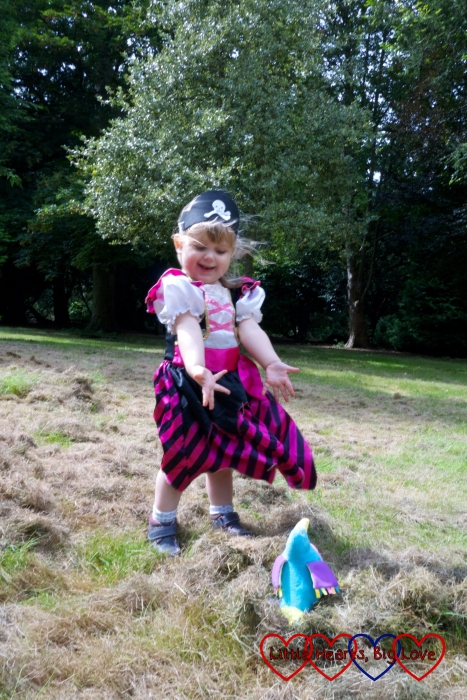 Our wander through the gardens led us back to the playground for fun on the swings and seesaw.  Jessica then wanted to try and climb the mound over the tunnel, but was struggling until a boy of a similar age gallantly held out his hand to assist her.  Naturally, Sophie then wanted to sit up the top too.  I lifted her up but once settled, she dropped Monkey. The boy who had helped Jessica scrambled back down to retrieve it. That sparked a whole new game with both the girls dropping their toys and giggling while the boy (and his twin brother, who had now joined us) kept retrieving them. They well and truly had those little boys in their power from that point onwards! 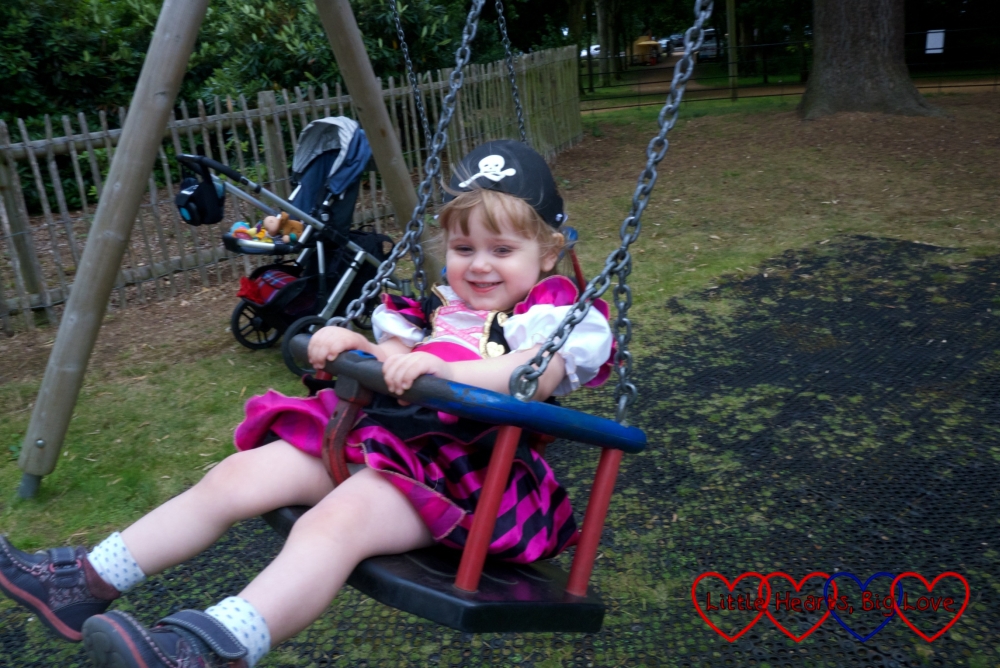 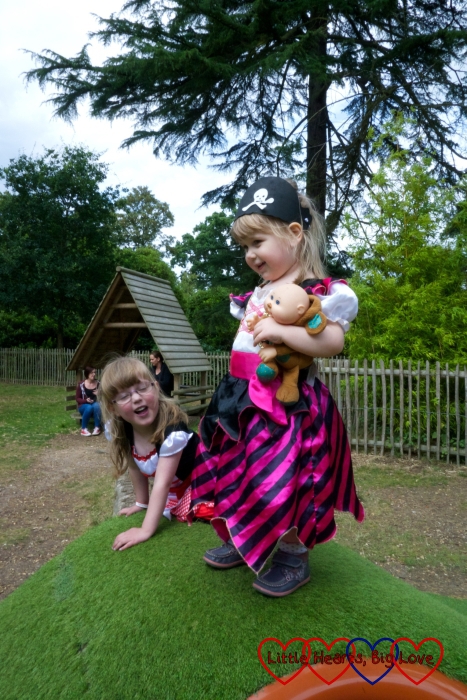 The first boy was quite taken with Jessica. Once she came down from the mound, he held her hand, assisting her across the wooden logs and up the steps to the slide, before asking if she would come and say hello to his mum who was watching. Unfortunately for him, Jessica was more interested in going exploring again than meeting her young man’s mother. She did give him a big cuddle though before they parted ways.

Back in the gardens, we discovered lots of hiding places in amongst the trees and bushes, but no Big Bad Wolf (thankfully!)  We had to stop and explore them thoroughly though, just to make sure he wasn’t lurking somewhere out of sight! 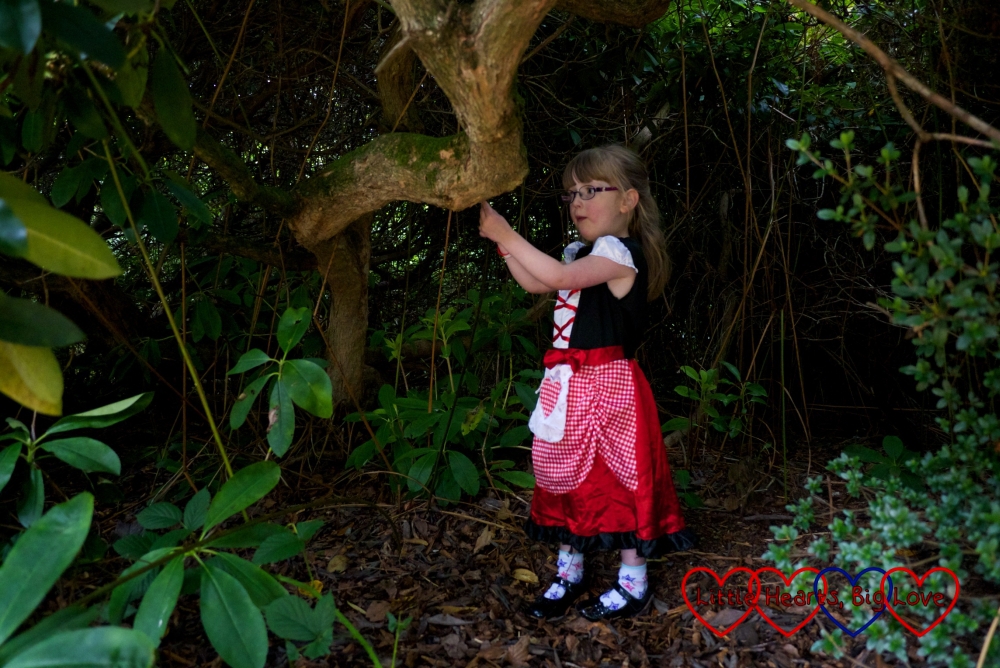 There was time for one final visit to the playground before heading home. This time Jessica befriended an older girl, who had a little box with grasshoppers and caterpillars in it. She let Jessica and Sophie hold some of the caterpillars. They were both quite fascinated by the tickly sensation of the caterpillar crawling over their hands. We’ve not managed to spot many caterpillars up until now so it was lovely to see the girls getting to see some. They were so gentle with them and spent ages looking at them. 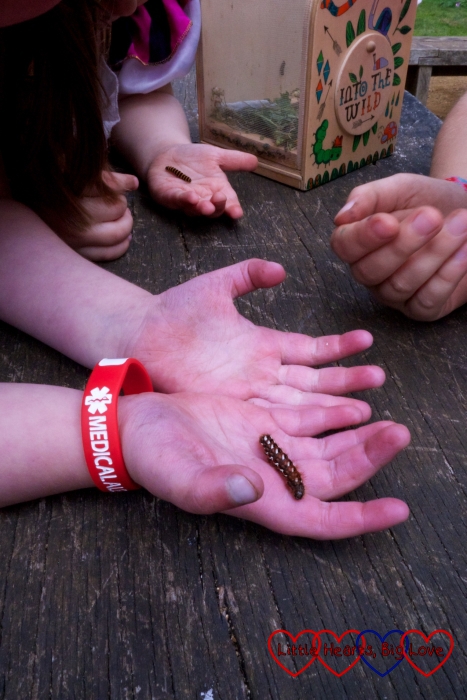 My little pirate and Red Riding Hood were both quite tired by the time we arrived home again! We may not have managed to find the Big Bad Wolf but we certainly had a magical adventure. 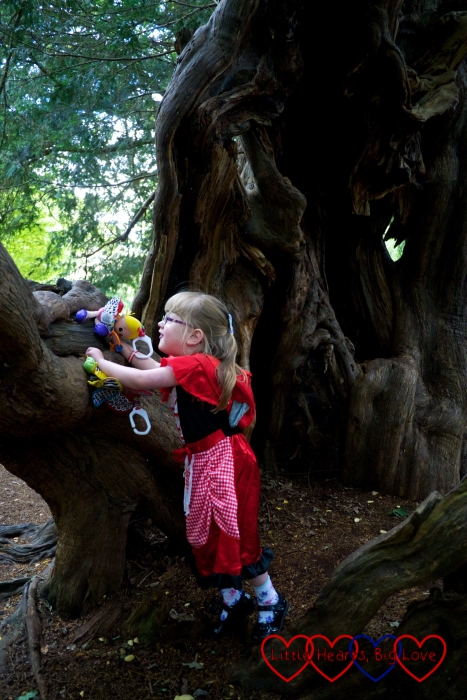 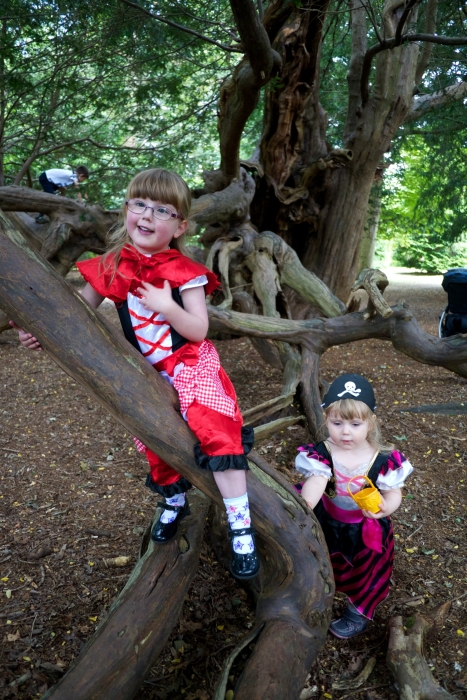 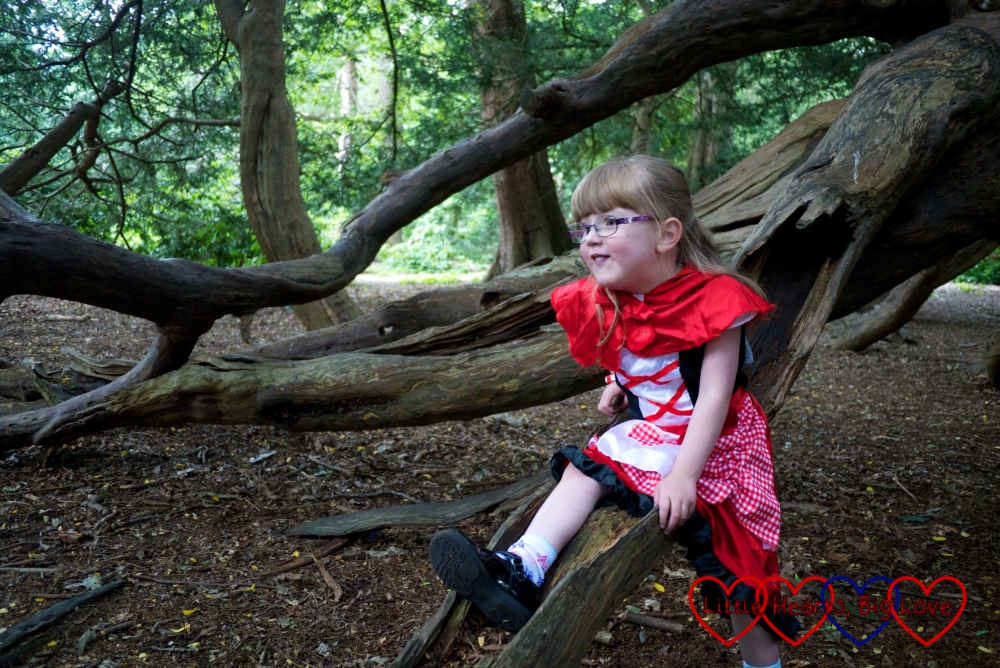