Trips to the beach are a rare treat for us as we live so far inland. My sister lives much nearer to the beach though. A summer stay at her house is a good opportunity for a day out at West Wittering. The last time we went was two years ago with all four of our girls. We had a wonderful day out, the memories of which are very precious. I’m glad Jessica was able to enjoy fun times at the beach with her cousins. This time there were just the three cousins together – Sophie, Thomas and my sister’s youngest daughter (my eldest niece was helping out at a local stables). 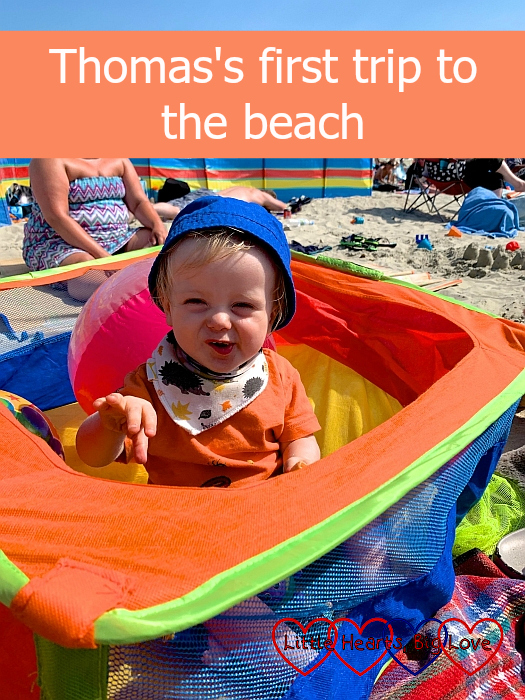 A sunny bank holiday weekend meant the beach was absolutely packed. Despite trying to leave early, we still hit long queues trying to get to West Wittering. Thankfully we were meeting my sister’s best friend and her family who had got there early and made sure we had plenty of room to set up next to them! 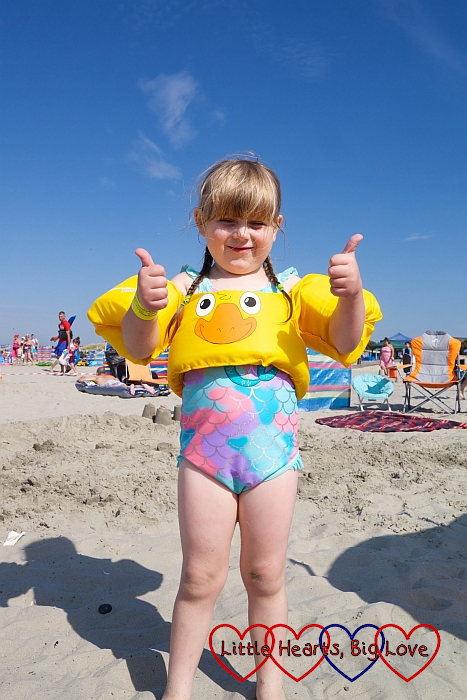 It was Thomas’s first day out at the beach. I have to admit I was a little bit apprehensive. Now that Thomas wants to be on the move, I wasn’t sure how well he’d cope with sitting on a towel on the beach. Plus he’s also at the stage where everything goes in the mouth. I had visions of constantly running around trying to stop him eating sand, stones and seaweed.

I needn’t have worried. He was absolutely fine. Of course, the sand did get tasted but Thomas soon discovered it was quite yucky to eat but great fun to squish and let it run through his fingers. And wet sand was squidgy and slimy and quite different from dry sand. Lots of fun. 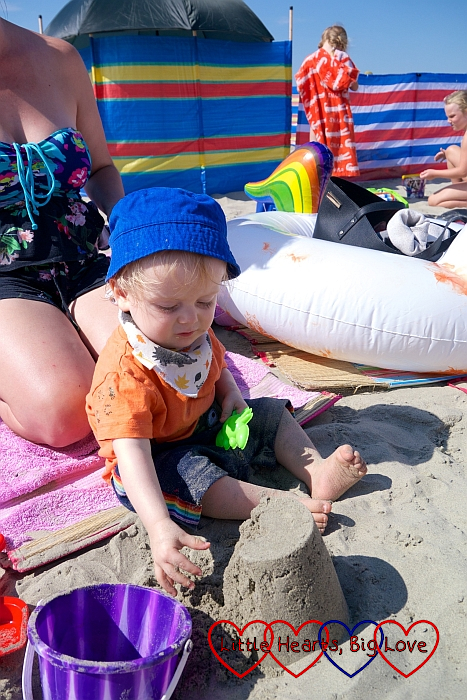 I had brought a pop-up ball pit with me. This was quite handy for sitting Thomas in with some toys and snacks. He was quite happy sitting there for short periods of time, watching Sophie dig and build sandcastles.

Meeting up with friends meant there were lots of adults around to keep an eye on the children. Sophie also had a playmate of her own age as a result too. I could relax and focus on Thomas, knowing that Sophie was well looked after. There were plenty of other people happy to take her for a dip in the sea if I was tied up with Thomas. 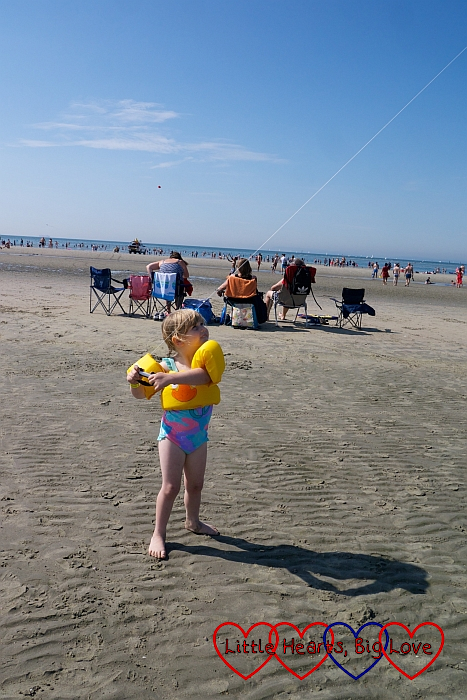 It also meant that Thomas had other people to cuddle him and keep him amused too! It was nice to have moments of one-to-one time with both of them. We’d already ticked “visit family” and “go to the beach” off our summer activities list with this day out, but it was also the perfect opportunity for another item on the list – “fly a kite”. 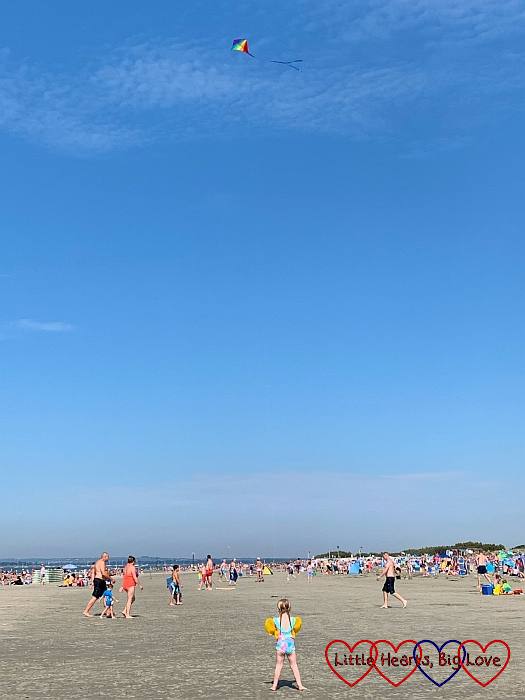 One of the things I love about West Wittering beach is all the shallow pools along the beach. Perfect for little ones to be able to enjoy a splash in the sea without actually going right out to the shore’s edge.

We’d bought Sophie a fishing net. She had a wonderful time with this, trying to catch a fish (or more likely some seaweed!) while splashing about in the water. 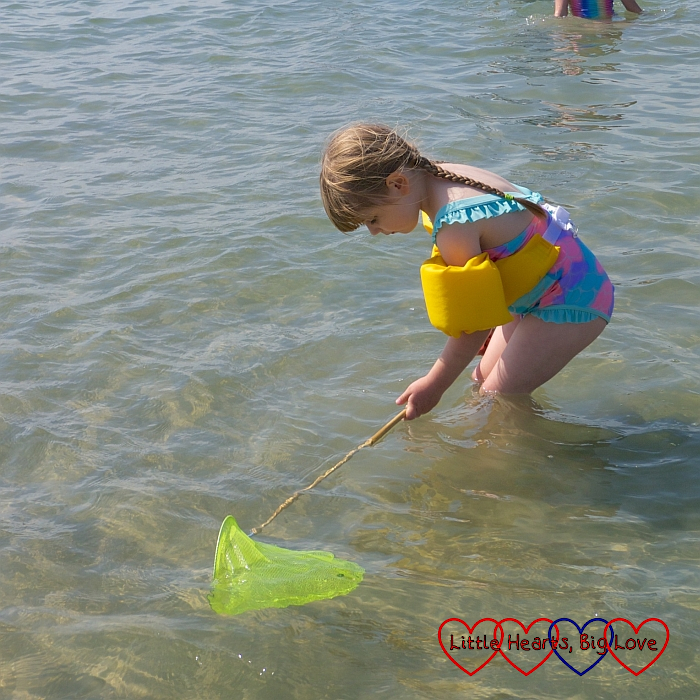 Thomas absolutely loved his first dip in the sea. He sat on the sand in one of the shallow pools squealing and splashing. 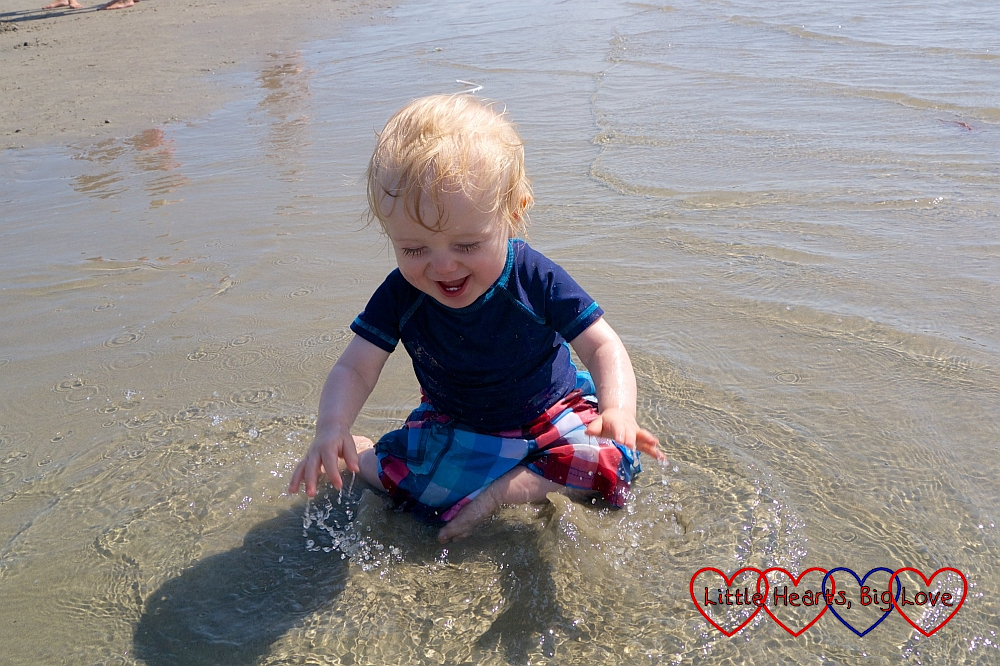 Sophie soon came and joined in with him. It was so lovely to watch them together, giggling away and having a wonderful time. 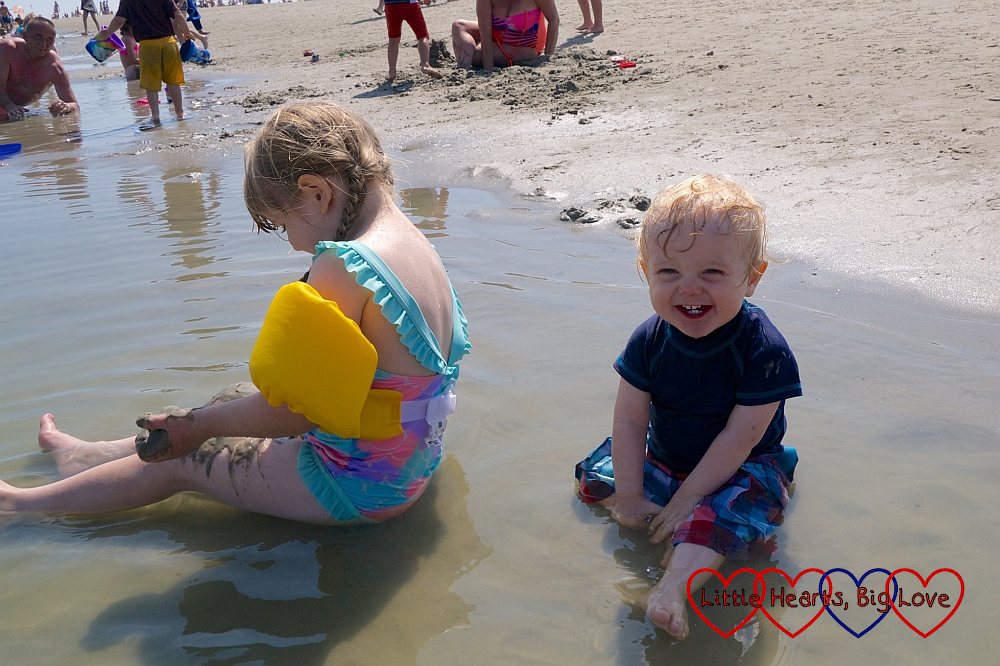 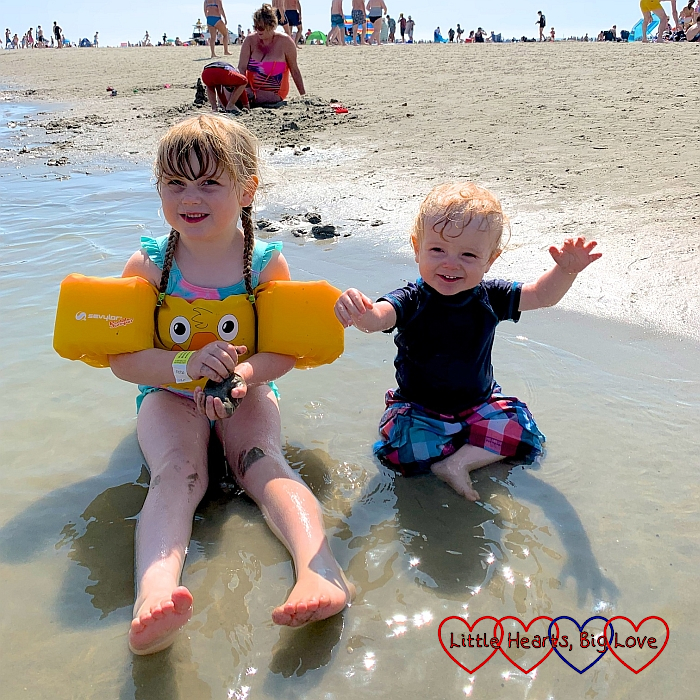 Later on, watching Sophie playing in the sand and Thomas sleeping on my lap, I thought what a lovely day we were having. The familiar pang of guilt hit me along with the memories of the last time we were here. A day when there was another little girl playing in the sand. How could I feel happy when Jessica wasn’t here? I heard her little voice in my head: “You’re allowed to be happy, Mummy.” A reminder that enjoying moments with Sophie and Thomas didn’t mean that I had forgotten Jessica or that I love and miss her any less. 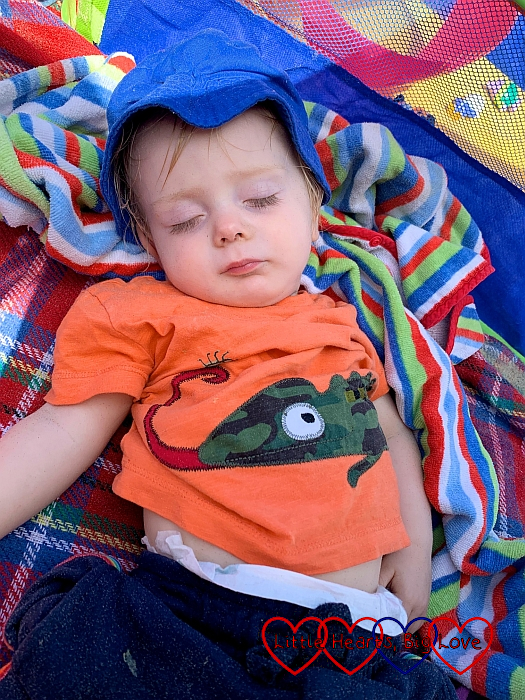 Late in the afternoon, a sea mist rolled in resulting in the red flag going up. It felt a bit eerie sitting on the beach surrounded by fog. There was a mass exodus at that point, resulting in another lifeguard announcement advising people not to leave the beach due to the huge queues leaving the car park. Thomas was still enjoying a very long afternoon nap and Sophie was happy playing so we were content to stay a while longer.

It wasn’t long before the mist cleared. There were cheers when the lifeguards announced that the beach was no longer red-flagged.

In the meantime, Sophie and her cousin had been busy digging away and then burying Sophie up to her neck in the sand. 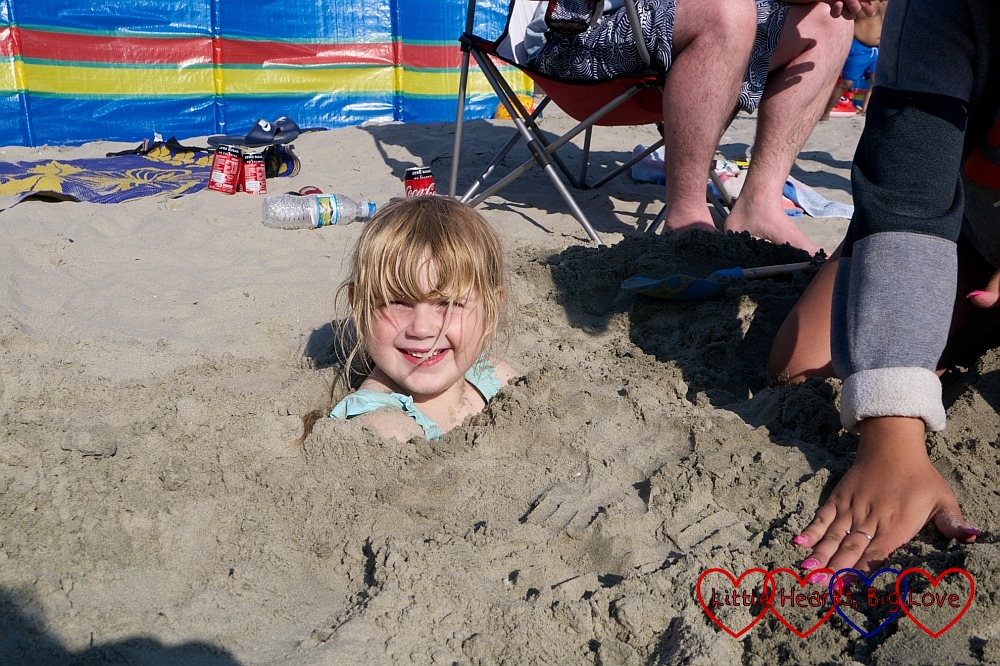 The sea was the best place to wash it all off once we’d dug her back out again! The tide had come in quite a lot by this time. Sophie and her cousin could go quite a long way out before it started to get too deep. 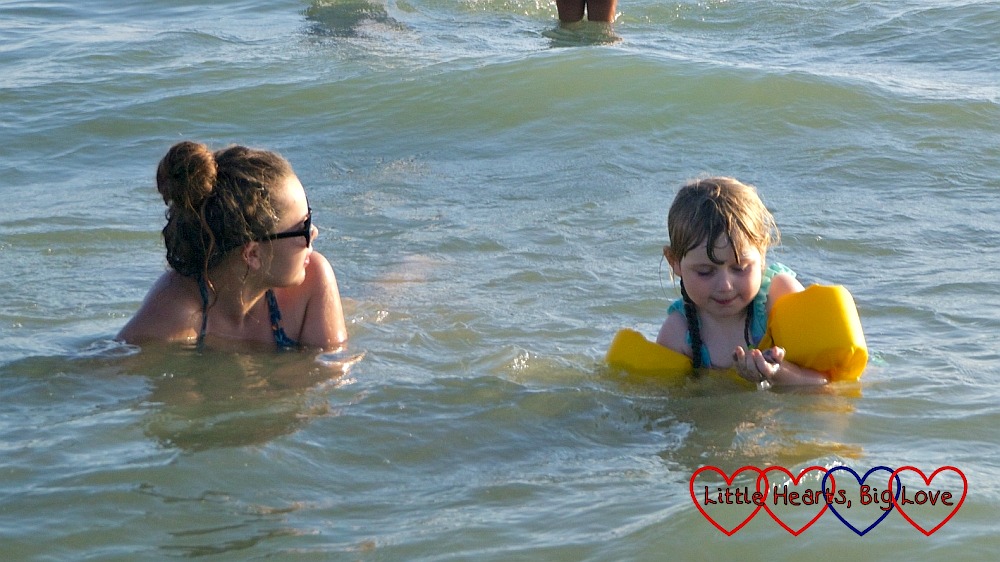 We held off leaving for a while knowing that it would be busy getting out of the car park. It still took us over an hour to get out leaving at 7pm. Next time I think we’ll try and avoid the bank holiday weekend if we can!

It was a lovely day out though and Sophie and Thomas both enjoyed themselves. Going back to West Wittering without Jessica was always going to be a bit emotional, but it felt like the right place to go for Thomas’s first day at the beach. 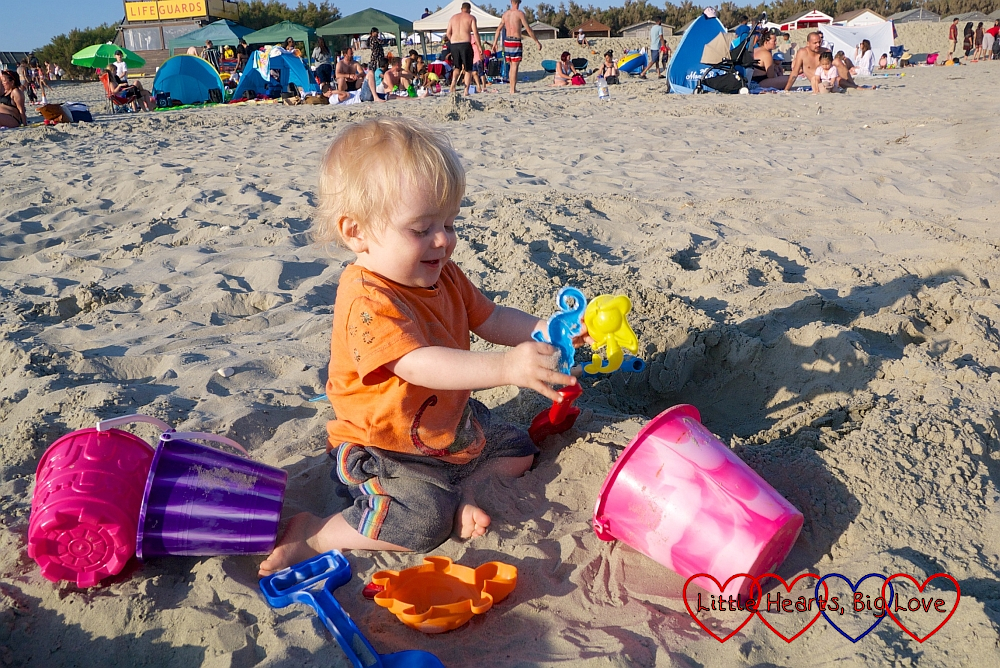 6 thoughts on “Thomas’s first trip to the beach”