It’s been a little while since our last trip to Chessington. I had hoped to take Sophie for a day out before Thomas arrived but the combination of a heatwave and being heavily pregnant made the prospect of a theme park day out less appealing. We’re now starting to venture out more again as a family and decided to have a day out at Chessington World of Adventures. 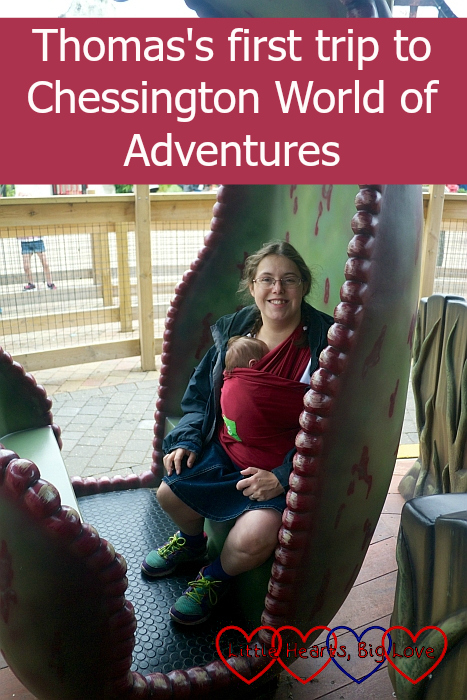 I wasn’t very impressed when we arrived at the gate though and discovered that the annual pass can no longer be used for entry to the park on Fridays, Saturdays and Sundays throughout August and the first weekend in September. This hadn’t been the case last year and I’ve since learned that it is a new change that was introduced in January this year. I had to go back and queue to buy tickets. These were discounted and cost £10 each. If we’d had to buy them at full price, we would have gone home. I wasn’t the only person caught out by this – the family behind us in the queue were similarly unimpressed for the same reason. Had I been aware of this beforehand, I would have avoided going on a Saturday even though it would have meant a solo trip with the children rather than having hubby there to help.

We would normally head for the Gruffalo River Ride Adventure first before the queue built up too much. By the time we’d sorted out tickets and got through the gates though, the queue was already 55 minutes so we headed for Sea Dragons instead which only had a 5 minute queue. Sea Dragons is a lovely gentle boat ride which is perfect for little ones. Thomas was snuggled up in the sling and slept all the way though his first ride at Chessington. 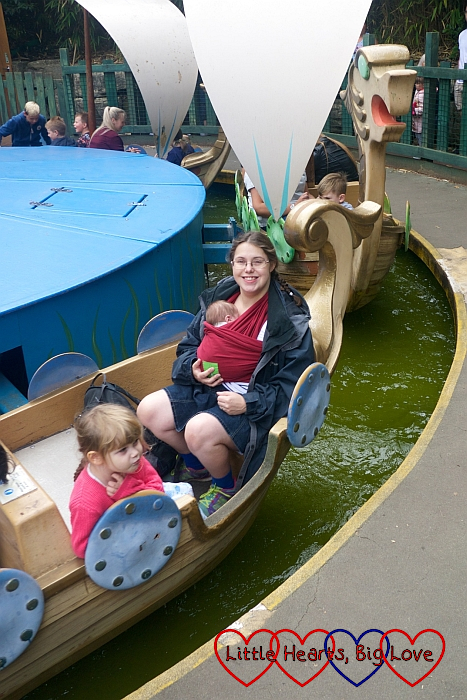 Sophie headed for Canopy Capers next. This is one of her favourite attractions. She loves making her way across the net bridges and looking down across the park, waving to us every now and then as we enjoy being able to sit down for a while and just watch! 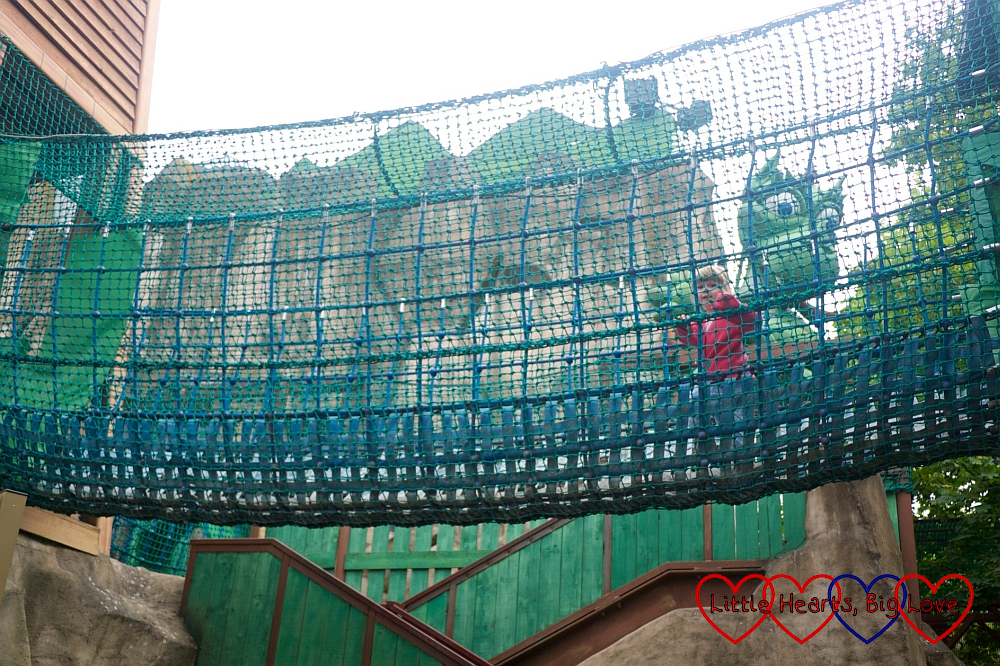 Thomas carried on having a lovely sleep in the sling while his sister played. He ended up spending most of the day in the sling. We brought the pram with us, although it ended up mostly being used to carry other things! Sophie couldn’t resist having a little ride in it at one point. I think she might be a bit big for it though! 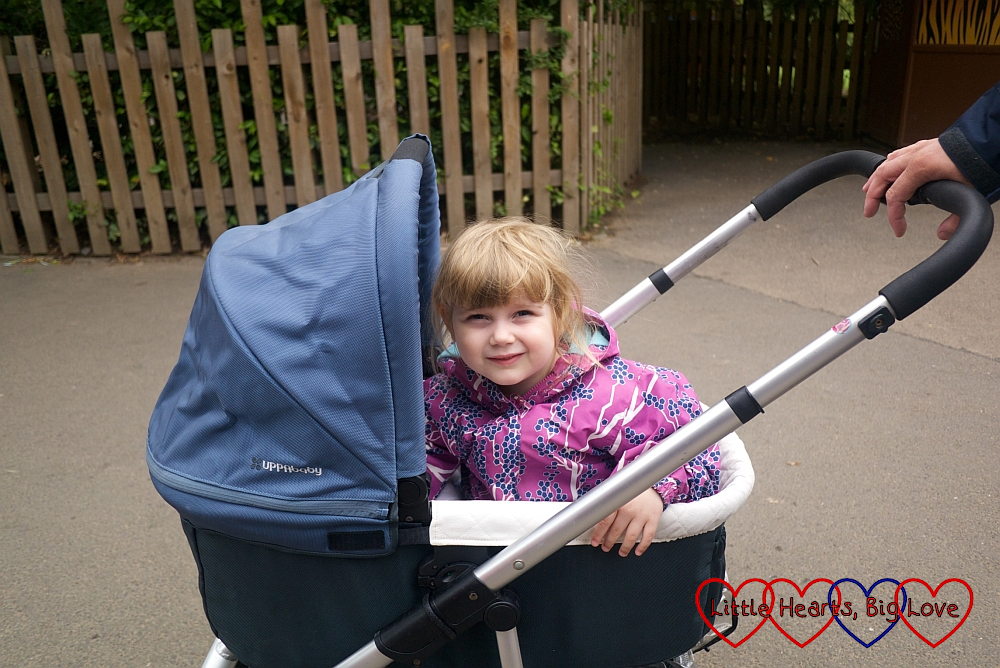 Next up was another one of Sophie’s favourites – Toadie’s Crazy Cars. She insisted that Mummy and Thomas sat in the front with her to help her drive. I think she still misses having her sister sitting next to her on this ride – it was one that they both loved. 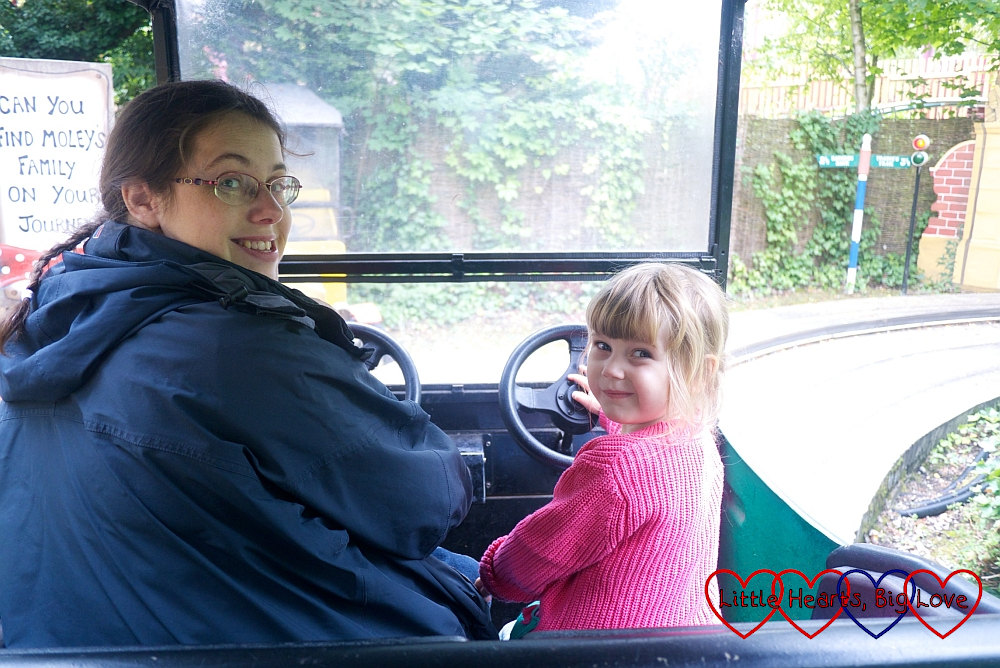 The Adventure Tree carousel is another ride that both the girls loved. I love all the different animals on this ride. Sophie always insists on riding one of the giraffes whenever she goes on this ride. Thomas and I were quite happy sitting in one of the rocking carriages while hubby stood with Sophie. 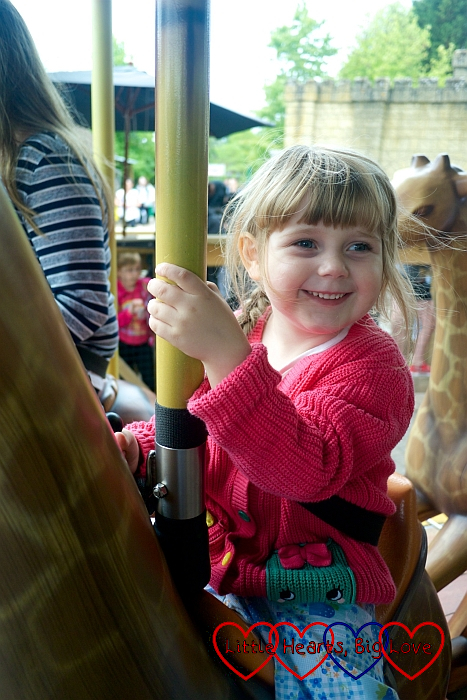 We decided to go on the Gruffalo River Ride Adventure after lunch. The queue was over an hour long though by time we’d had lunch. Normally we would have queued, but we knew we would need to leave early due to having other plans for the evening. We decided to buy Fast Track tickets for the Gruffalo ride which cost £6 each. We had a few minutes to spare before our time slot which was just enough time to visit Hocus Pocus Hall before our boat journey through the deep dark wood on the Gruffalo River Ride Adventure. 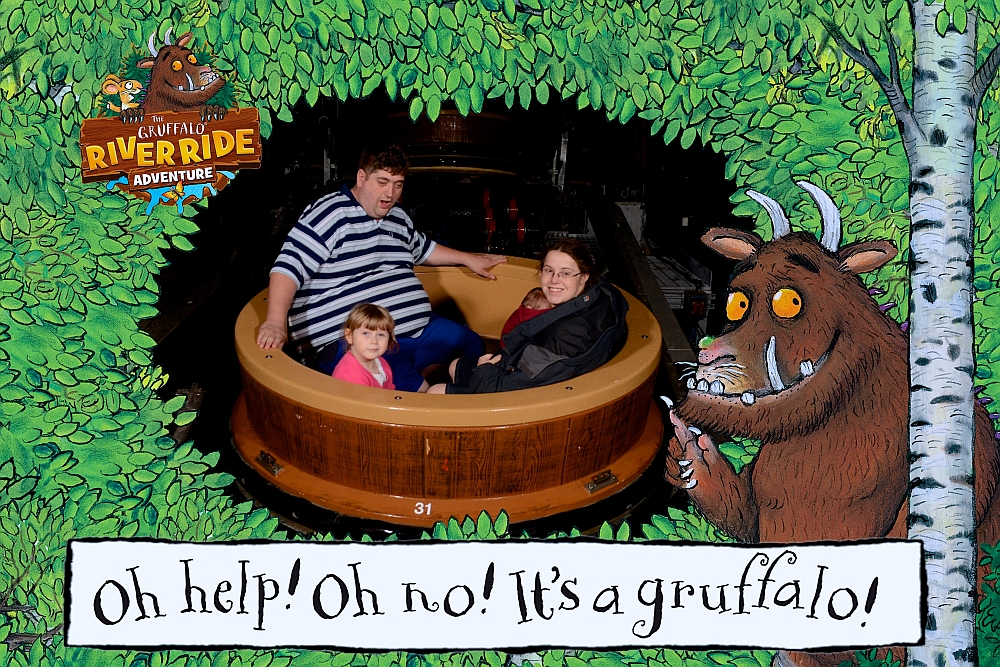 Reducing our queue time to just a few minutes meant that we were also able to catch the Gruffalo Groove show afterwards. Sophie loved watching all the different dances that were performed in the Gruffalo Groove and watching the Gruffalo join in at the end. For me, it was very bittersweet though as the last time we saw it, Jessica was with us and it was one of the few things she was able to enjoy that day. 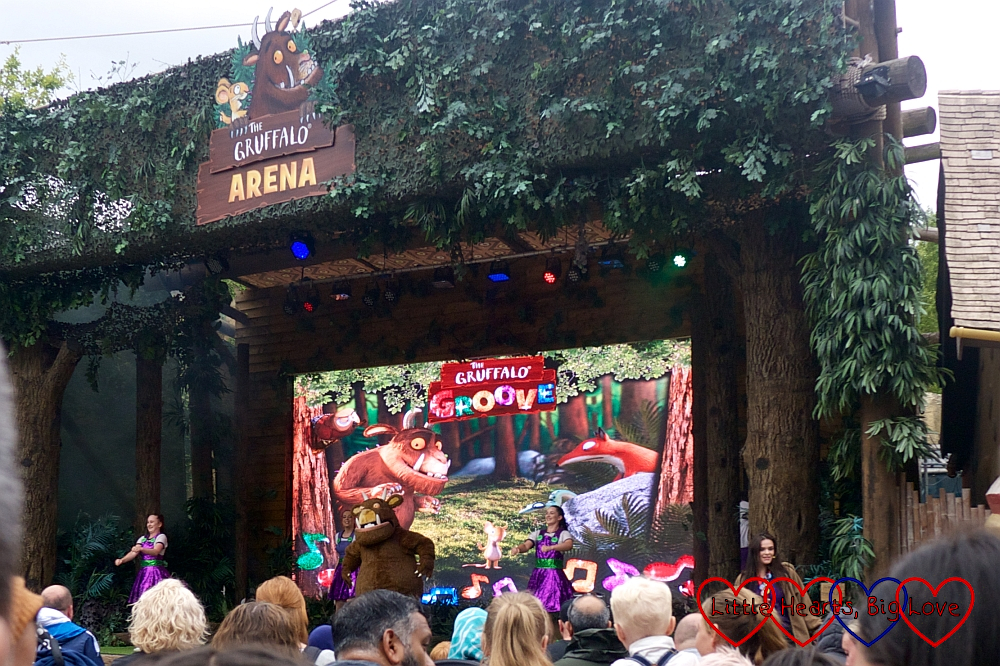 The meet and greet with the Gruffalo later on was also bittersweet for similar reasons. Watching Sophie’s joy as she ran up to give him a big cuddle made my heart ache for the time when there were two little girls wanting to cuddle him. 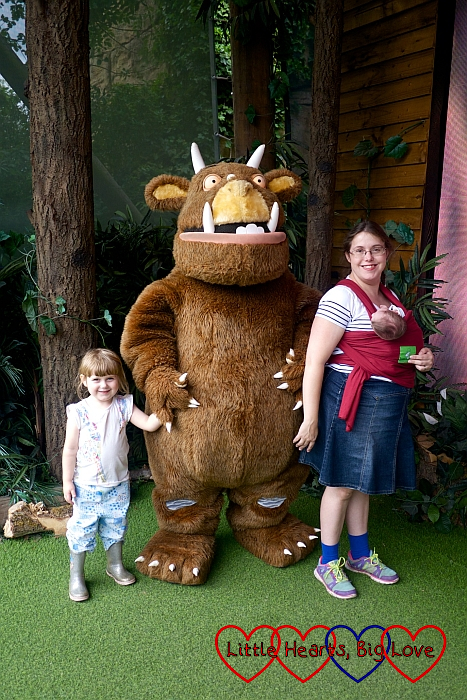 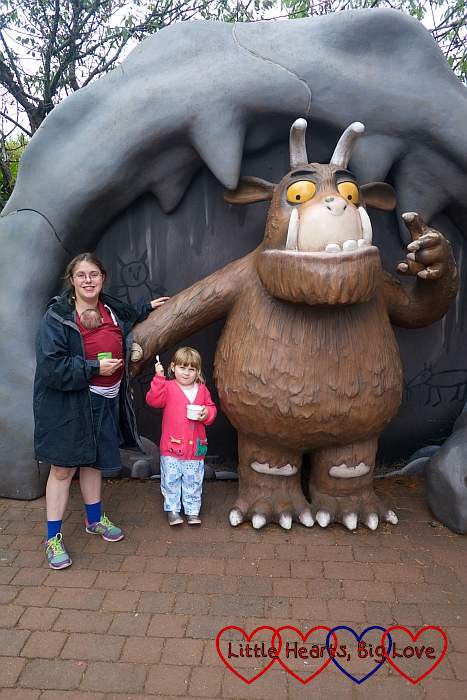 We had just enough time for one more ride before it was time to go. Sophie decided instead that she wanted to go to the arcades near the Adventure Tree and have a go on the tuppenny falls machines instead. 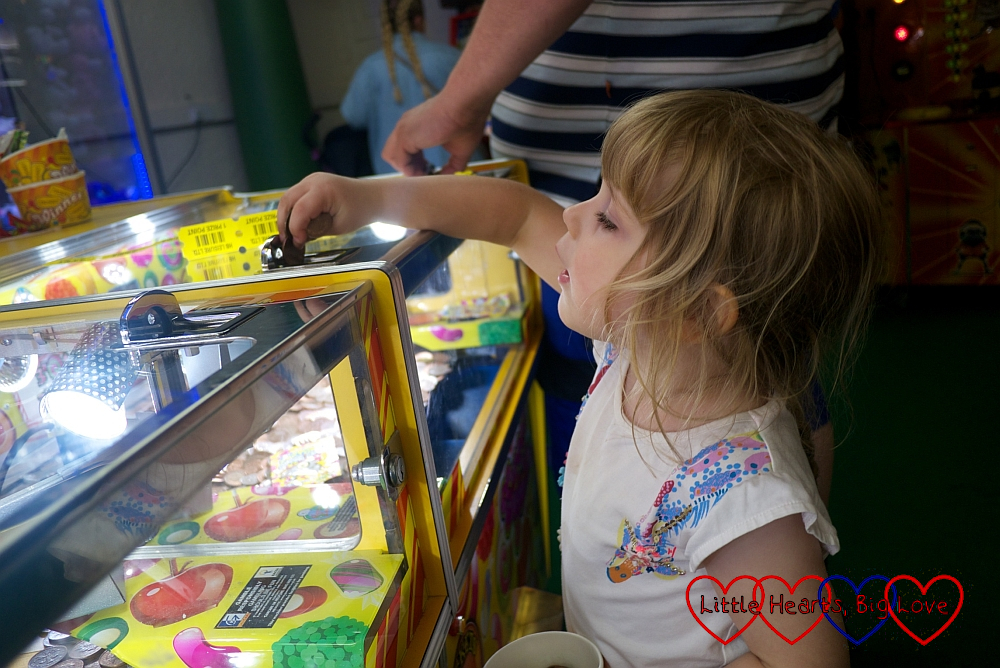 On the way out, Sophie couldn’t resist waking the dragon near the exit by touching his treasure! She’d had such a lovely day out. Thomas seemed to have enjoyed his day out too. Admittedly, he’d mostly slept through it all, waking only for a feed here and there! 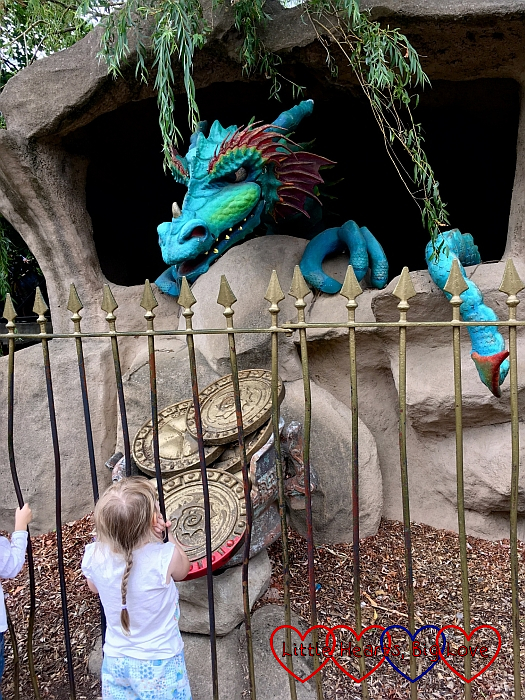 Taking Sophie for a day out with a newborn Thomas rather than going a few weeks earlier meant that we were able to go on more rides. There were a few rides that I was able to take Thomas on that weren’t suitable for expectant mothers. Had I taken Sophie on my own a few weeks earlier, we would have been very restricted when it came to the rides. We could have still enjoyed the shows, zoo, Sea Life centre and play areas but I think Sophie would have been disappointed to have missed out on some of her favourite rides.