Visiting Milestones Museum in Basingstoke is like stepping back in time into a bygone era.  Inside the museum is a network of streets and buildings creating a replica of life from the Victorian era through to the 1930s and post-war period. 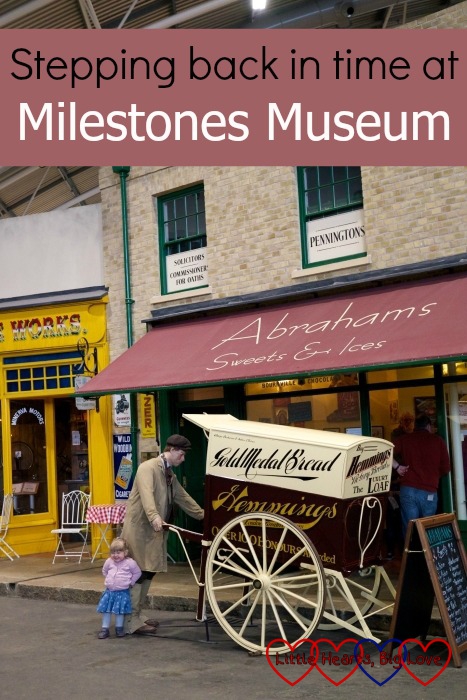 As well as getting to see the old buildings and vehicles, we also took part in the Lego Quest for the Brick Kingdom challenge which is running until 10th April.  We picked up a Lego Quest book on our arrival to help us find the clues. Our quest was to rescue Princess Orra who had been kidnapped by the bad wizard Zapp.  Throughout the museum were various Lego models which brought the story of the quest to life. The girls really enjoyed finding them, and taking part in the various activities as part of this. 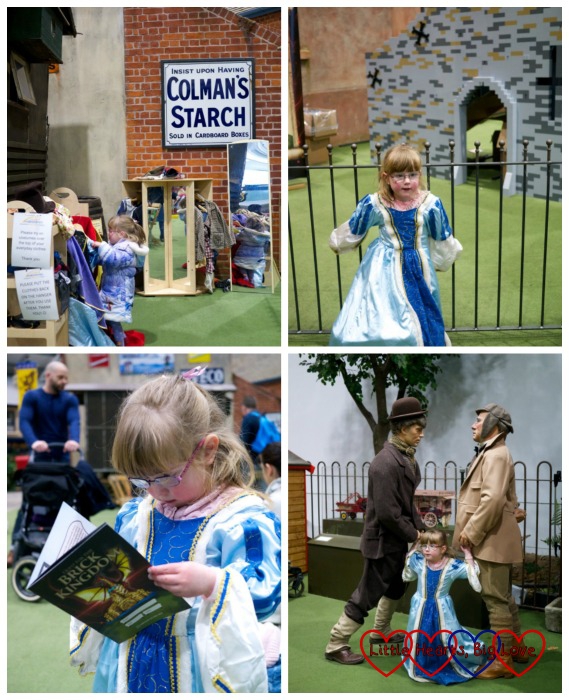 Near the start of the quest was an area where the children could build their own Lego models. Sophie made a beeline for this and spent quite some time happily engrossed in building Lego walls and towers.  Jessica was more interested in the nearby dressing up area and the princess dresses.  It was quite a while before the girls were ready to move on and explore the museum a little further! 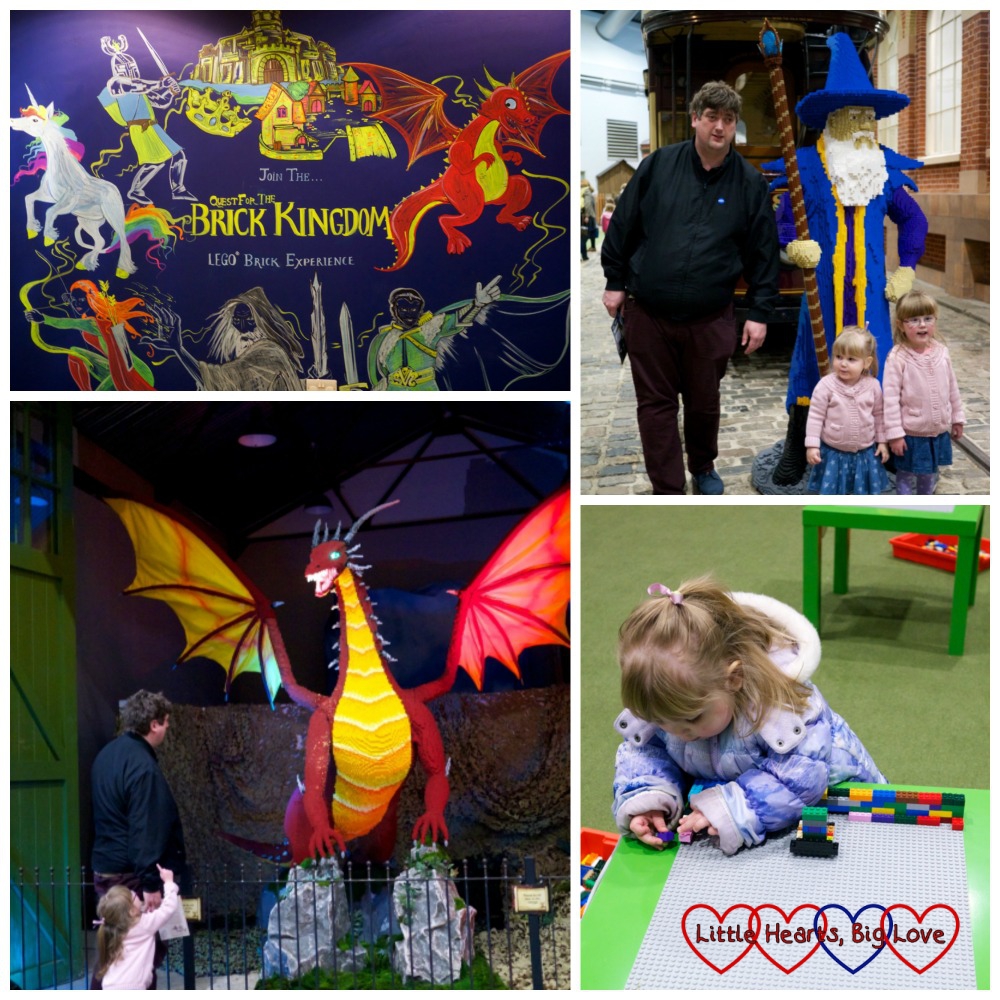 Near the dressing up area, we found Abbra, the good wizard. There was also a big dragon nearby who was very noisy! Jessica was quite happy to take a closer look but Sophie found him very scary. 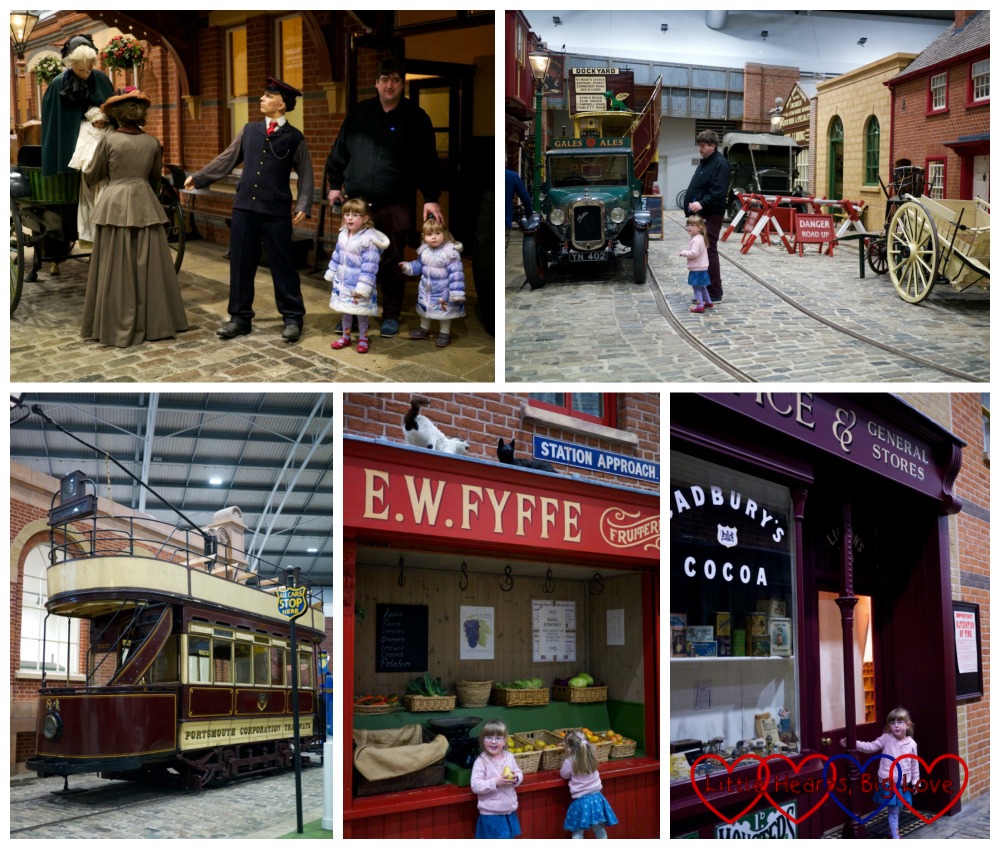 Both the girls enjoyed looking around all the different buildings and shops and getting a glimpse into what life was like when their grandparents and great-grandparents were their age.  It was interesting to look in the shop windows, step into the saw-mill and look at all the different vehicles. 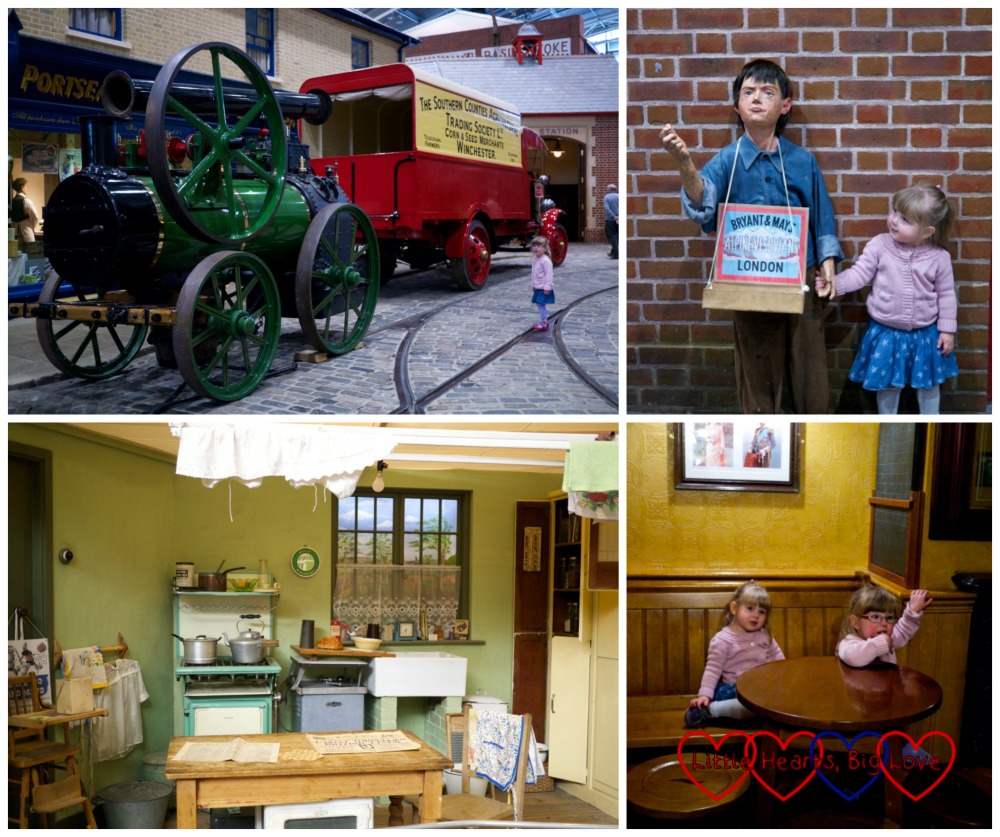 After stopping for lunch at the Baverstock Arms, we joined in with creating a big Lego mosaic of a juggler.  We were given a Lego board and a choice of which of the remaining mosaic tiles were left to complete.  I chose one with just two colours. It was a less interesting pattern but easier for the children to complete without too much help from us.  Hubby and I just filled in the white tiles and left the girls to fill in the purple ones. 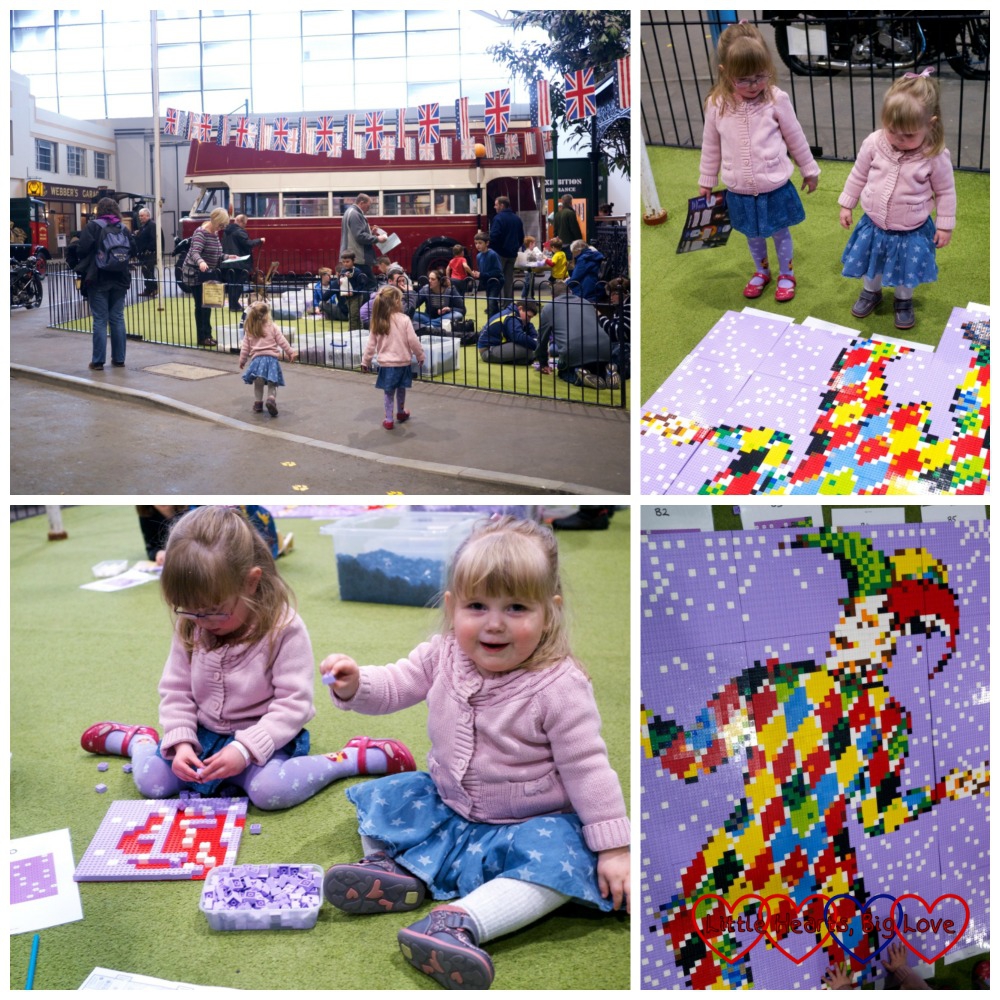 Our next stop was the sweet shop. We handed over our ration cards and the penny we had bought when we arrived at the museum, in return for 2oz of sweets.  Jessica and Sophie especially enjoyed this part of the museum! 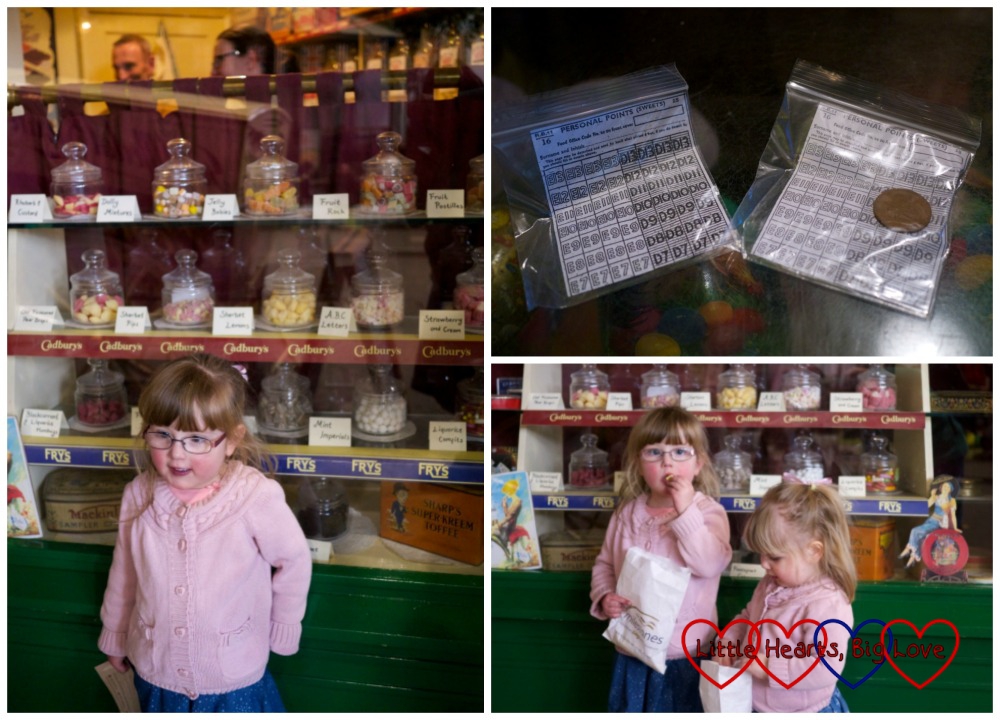 Sweets in hand, we continued on our way to finish the Lego quest. Other characters that we encountered on out trail included an archer, baby dragons, a griffin, a unicorn and a knight. Eventually we were led to Princess Orra herself so we could restore her to her throne. 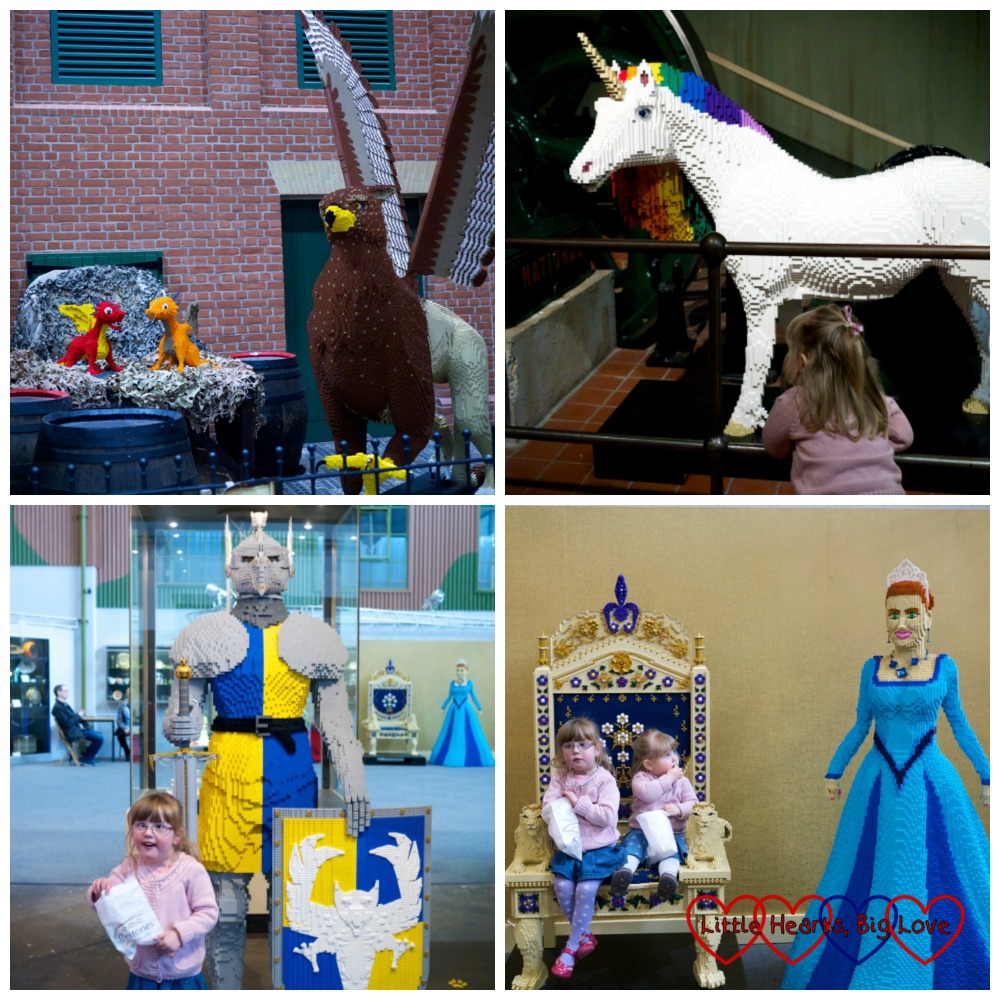 We found Princess Orra model in a section of the museum recreating rooms from the 1930s, 1940s, 1960s and 1970s. I found these particularly interesting especially the 1930s and 1940s rooms. They gave me a glimpse of how my parents would have lived as small children.

Our final stop in the museum was at the penny arcade. We exchanged our modern money for some old pennies (10p per old penny) to use on the various machines.  The girls especially enjoyed the puppet show machines and watching the puppets dance away to the music. Sophie couldn’t resist joining in with the dancing too! 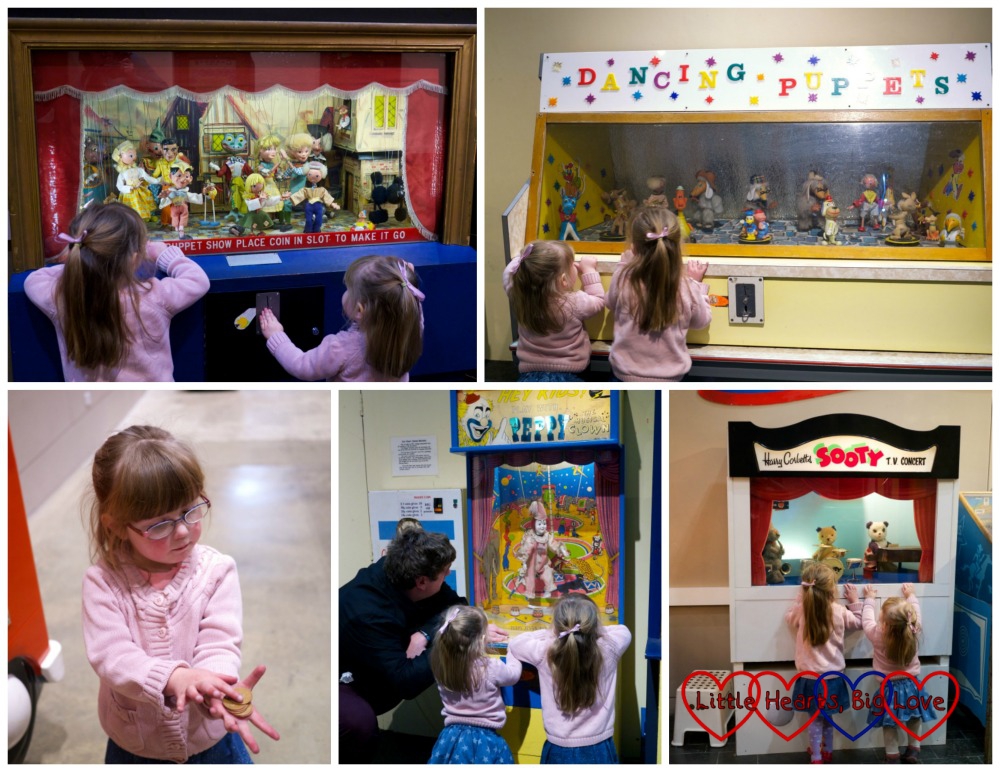 We all had a wonderful afternoon exploring Milestones Museum. I would definitely recommend it as a great family day out, especially on a rainy day as the whole museum is indoors.

6 thoughts on “Stepping back in time at Milestones Museum”