When we first heard about the Shaun in the City trail coming to London, shortly after completing our Book Bench challenge, we knew that this was a challenge we wanted to take on. 50 different Shaun the Sheep sculptures placed around central London to find. We were away on holiday hunting gold postboxes when the Shauns first appeared. No problem, we thought, they would be there for two months, there was plenty of time to find them. And then the weeks slipped away and with only a few days remaining before the sculptures disappeared, I resigned myself to only being able to visit a few of the Shauns, as had been the case with the Paddington Bear trails a few months earlier. Hubby, however, was sure we could still do it… 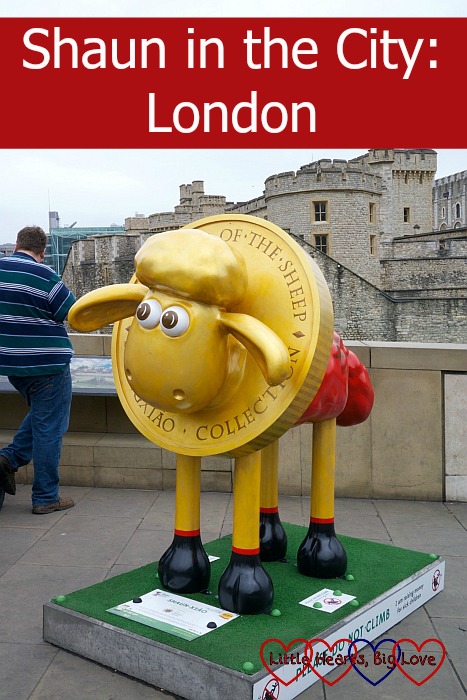 And so one sunny Saturday morning in late May, we headed off on the train to go on a sheep hunt. The girls were very excited by the journey on the Tube as we made our way to Canary Wharf to find the first two sheep: the Golden Fleece and Hello Kitty #OneKindThing. We stopped for lunch before getting back on the Tube to London Bridge to find Rainbow, located inside the foyer of the View from the Shard. We ticked off four more sheep (Mittens, Lenny, Petal and Globetrotter) as we made our way to Tower Bridge, getting a trophy for crossing the Thames whilst on a Shaun hunt. 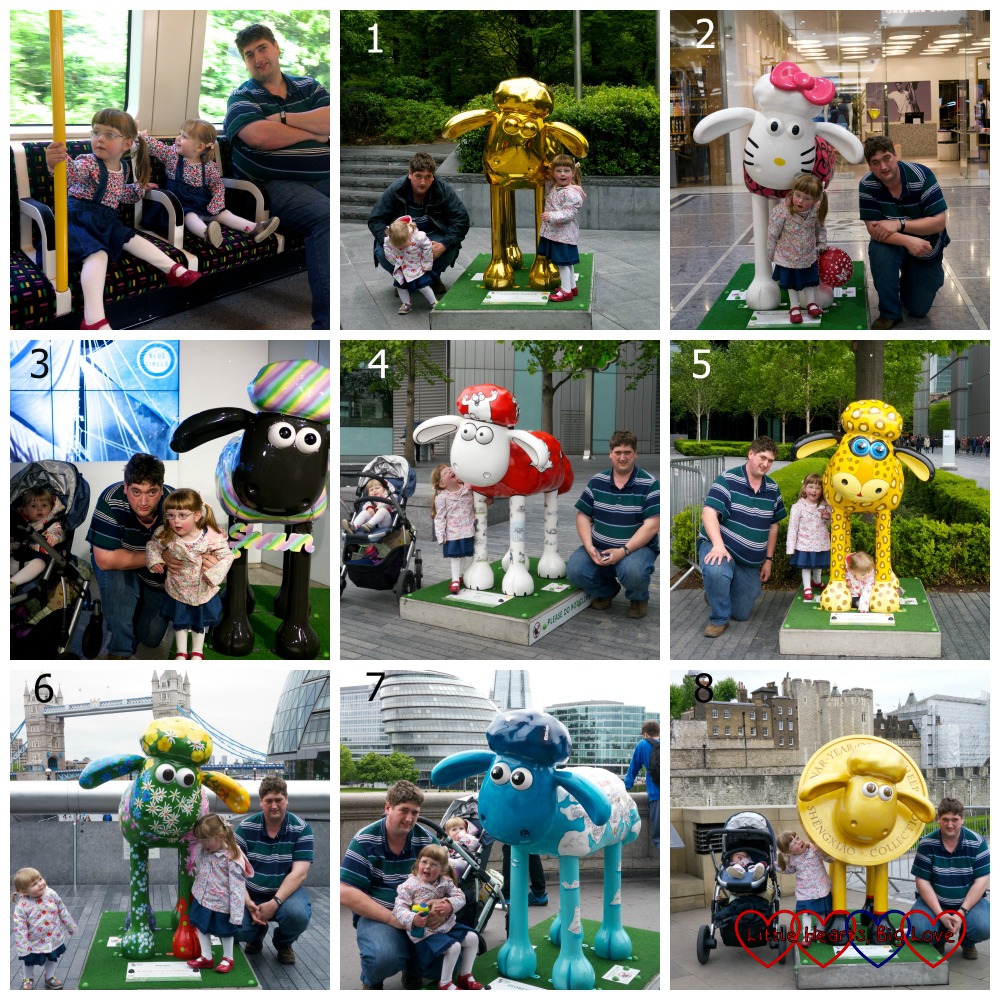 We found the next two Shauns (Shaun Xiao and Yeoman of the Baard) near the Tower of London. Jessica was starting to find all the walking very tiring for her little legs by this point and was very happy to be carried on Mummy’s back while Sophie had a snooze in the buggy. From the Tower of London, we headed into the City making our way towards Liverpool Street Station, finding another six Shauns (Liberty Bell, Kanzashi, Shanghai Shaun, Robo-Shaun, Ruffles and the Pearly King) en route. We stopped for a breather and a snack at Broadgate Circle where the girls enjoyed chasing each other about before deciding that they would both like to be carried by Mummy! I quickly discovered that this was also the easiest way of carrying them on the escalators as we headed back to the Tube (via the Barbican, ticking off another two Shauns – Mr Shaun and Counting Sheep) whilst hubby expertly managed the buggy. 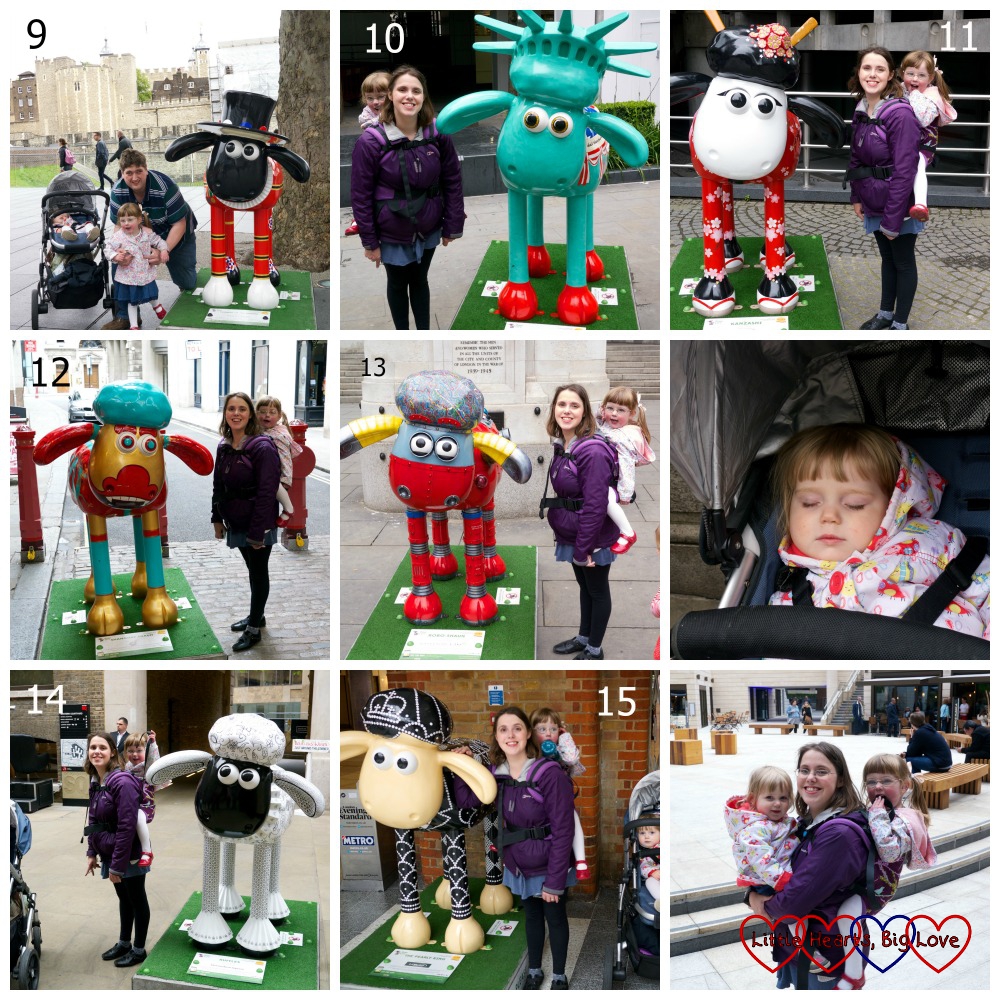 At Paddington, we found the final two Shauns off the day – Lambmark Larry and Paddington Shaun before we headed home, making a slight detour to St John’s Wood in order to cross the Abbey Road zebra crossing and get another trophy on the phone app. 19 Shauns down, 31 to go.
The trophies, I think, are probably what helped spur hubby on to complete the challenge. There are 38 to be collected, awarded for completing trails, completing trails within a certain time period, finding a certain number of Shauns, finding a Shaun at a particular time of day, or visiting a specific website. There were also some fun trophy challenges – such as finding a Shaun whilst walking backwards for the last 15 metres or spinning around 5 times on the spot when discovering a Shaun. Over the course of our two day sheep hunt, we managed to obtain all 28 of those possible to obtain in London. 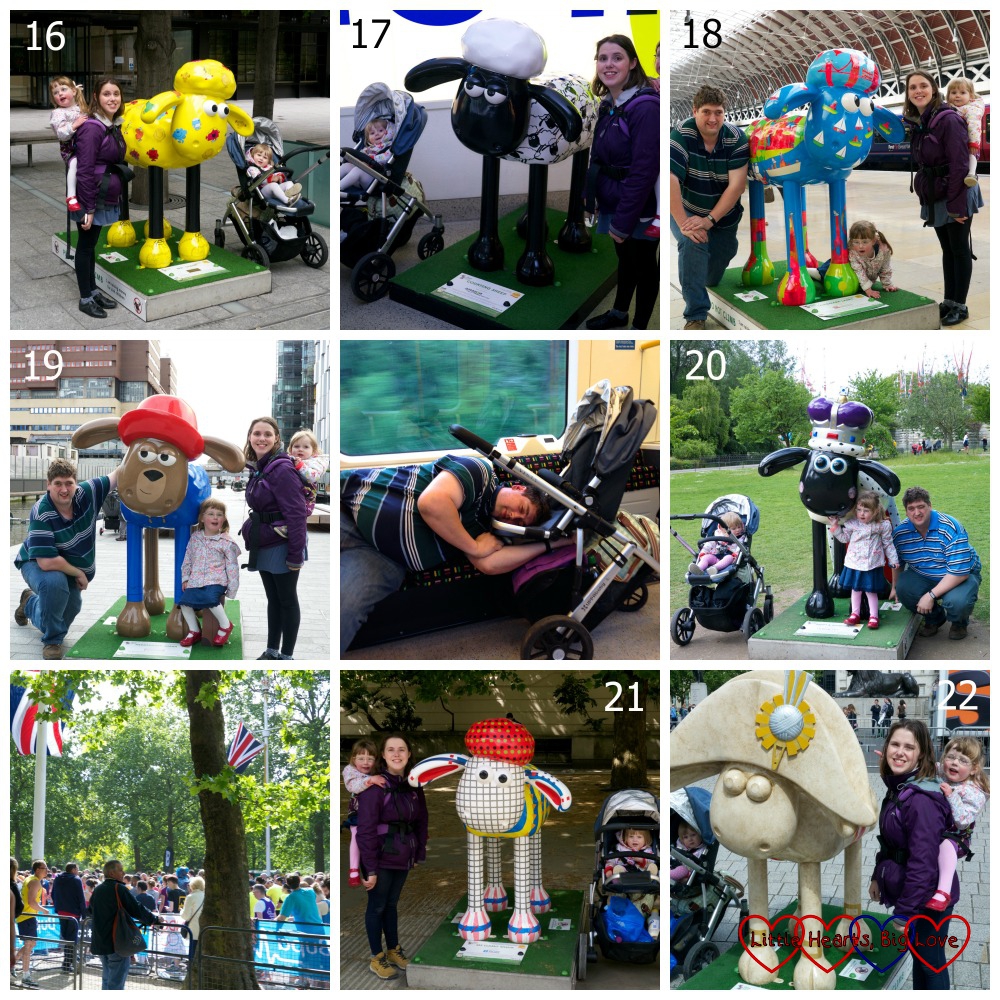 After a day’s rest, we were off again on the Bank Holiday Monday, starting bright and early to resume our sheep hunt. What we hadn’t realised though was that Bupa London 10,000 race was taking place that day, starting at St James’ Park, the location of our first Shaun, Happy and Glorious and making getting to the next two (Me Llamo Shaun and Nelson) a little more tricky.   Once those were ticked off though, things became easier as we headed for the West End, the location of the next few Shauns – Woolly Jumbo, The Gruffalo Shaun, Monsters! and Ram of the Match, stopping to pose with the statue of Robert Wadlow, the world’s tallest man, outside Ripley’s Believe It or Not! 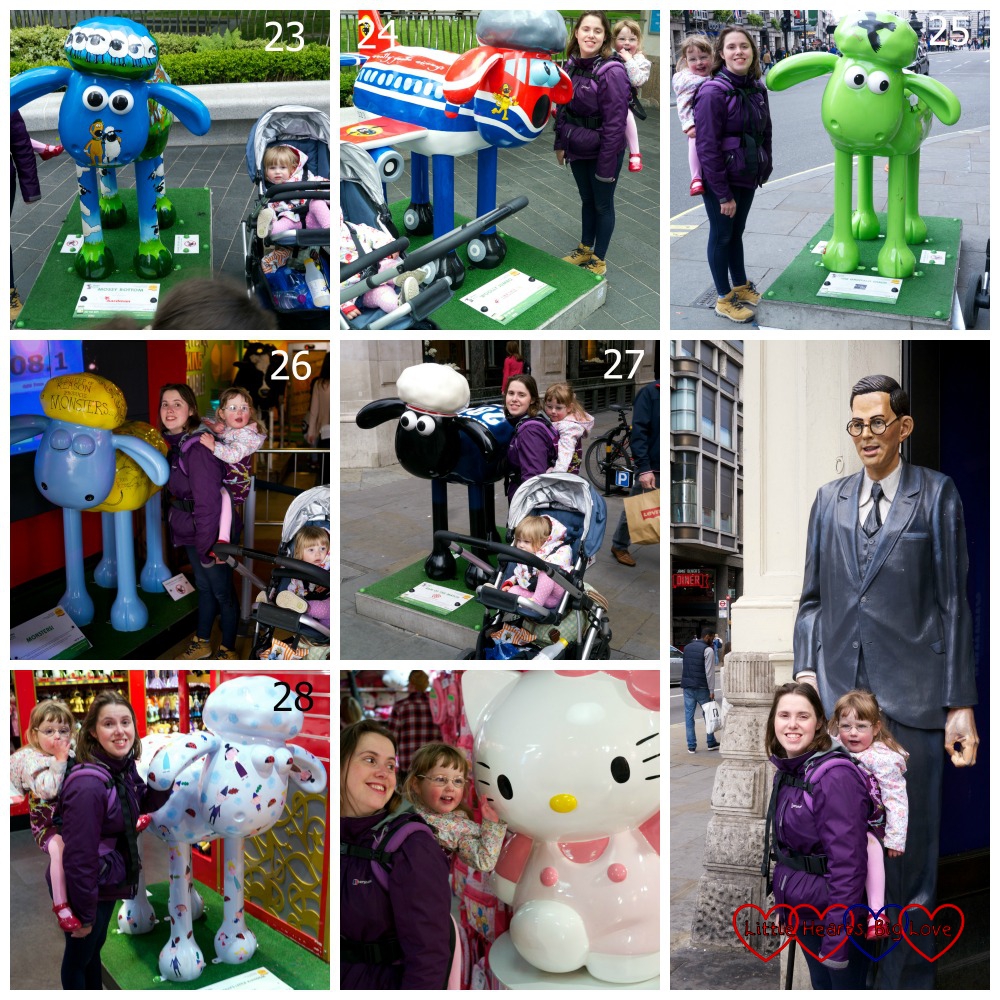 The next stop was much more exciting from Jessica’s perspective as the Ben and Holly’s Little Kingdom Shaun was found inside Hamleys. Naturally, we had to spend a little time inside and Jessica was very excited to see Hello Kitty and had fun playing with Sylvanian Families. Sadly, Sophie missed out as she chose this moment to have her nap!

We made our way along Carnaby Street, through Soho and Chinatown, to Covent Garden, finding several more Shauns (Rule Britannia, Baa-Bushka, Jingtai, Paradise Bunch, Flash!, Another One Rides the Bus, Candy Baa and Pinky Plum) along the way before stopping for a well-deserved ice-cream. Frida Baa-Hlo and Ewe-Nion Jack were found on the South Bank before getting on a boat to Shakespeare’s Globe where we found To Sheep Perchance To Dream which had sadly been damaged, probably from someone climbing on it. We were lucky that we were able to tick this sheep off our trail as it left the trail the following day for repairs. 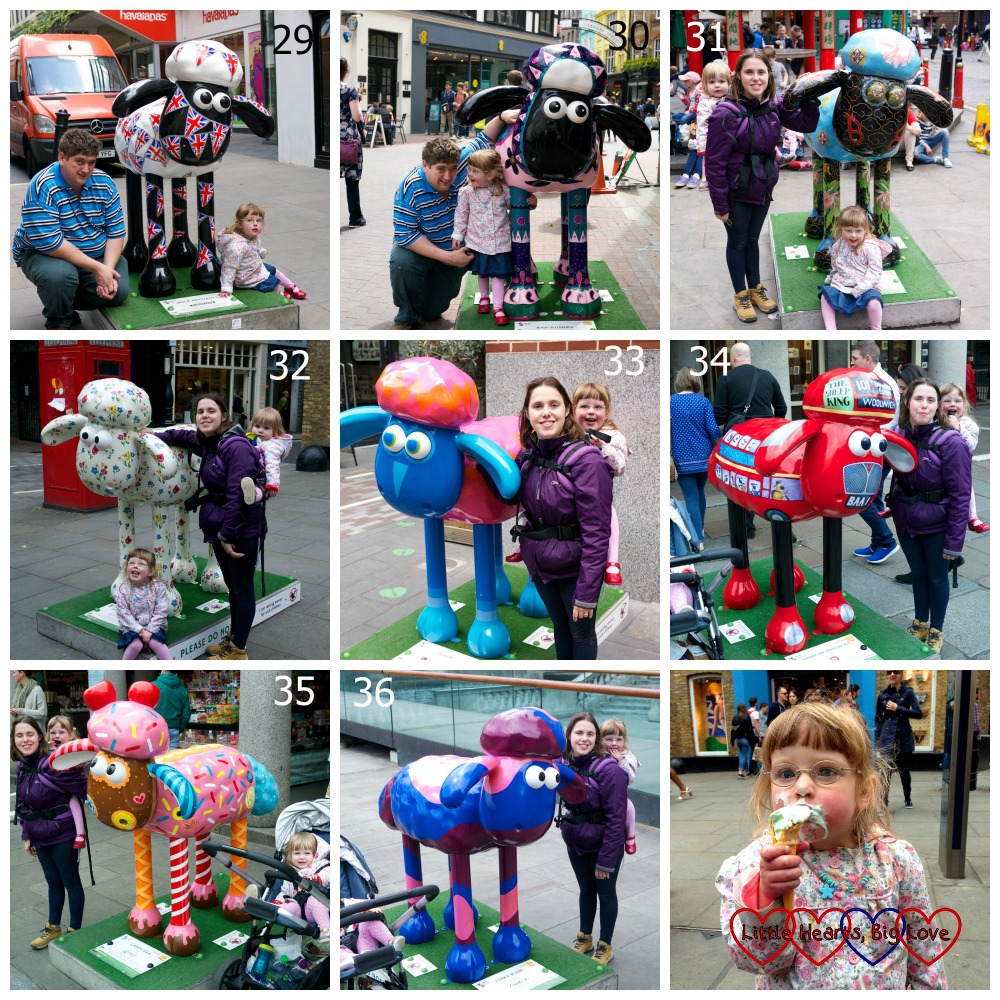 Br-Ewe-Nel, a short distance away, had also been a casualty of unkind treatment with graffiti adoring his top hat. It was sad to see some of the Shauns having been damaged although hopefully they will both be fully repaired before they are auctioned off to raise money for the Wallace and Gromit Children’s Charity, supporting children in hospital, later this year. 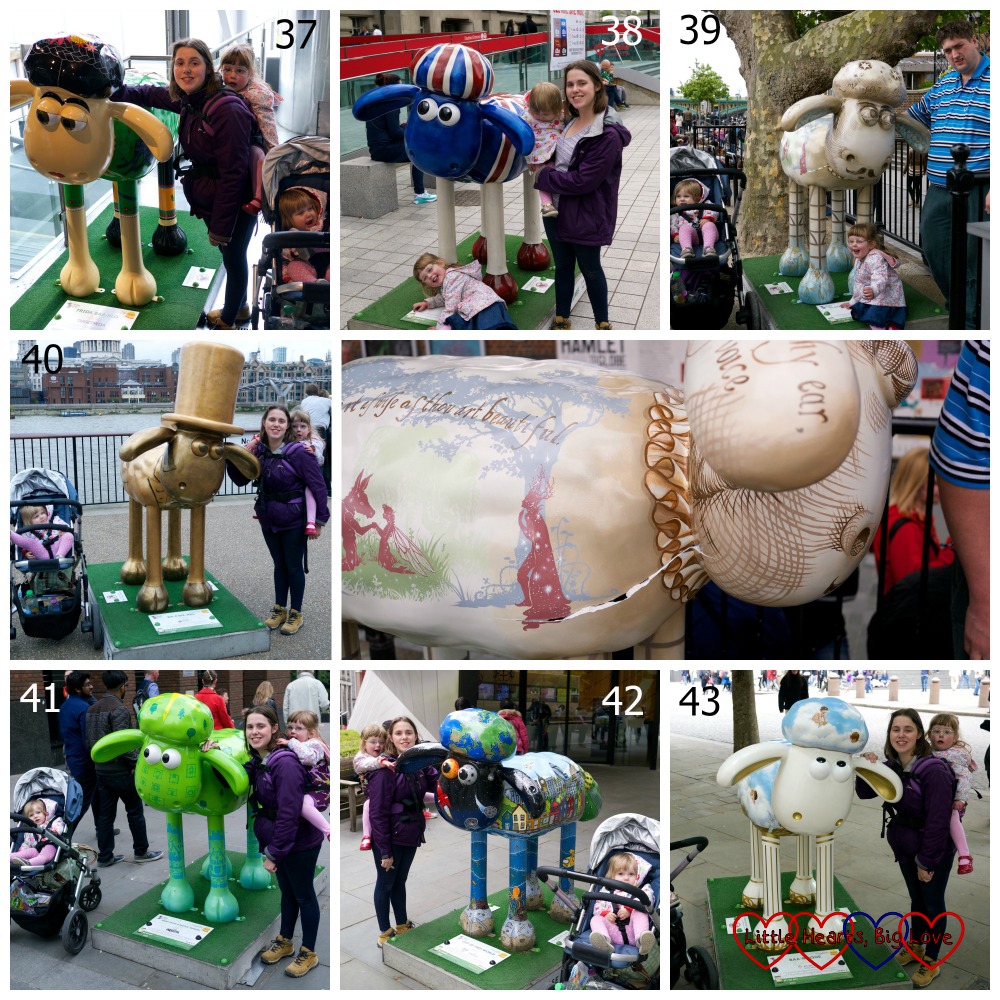 Crossing the river one more time, we were now nearing the end of our Shaun hunt with the last few being situated around St Paul’s Cathedral. Sheep Shape and Bristol Fashion, Out of This World, Baa-Roque, Literary Lamb, Hamish, Chelsea Pen-Shaun-Er and A Capital View. Three more to go…

“Not again!” grumbled Jessica as we asked her to look at the camera at Fine and Gandy. The sheep hunt was clearly rapidly losing its appeal but we were nearly there now. Woolly Wiggle was next and then the final Shaun at the Guildhall – The Guardian. 50 Shauns found in two days. 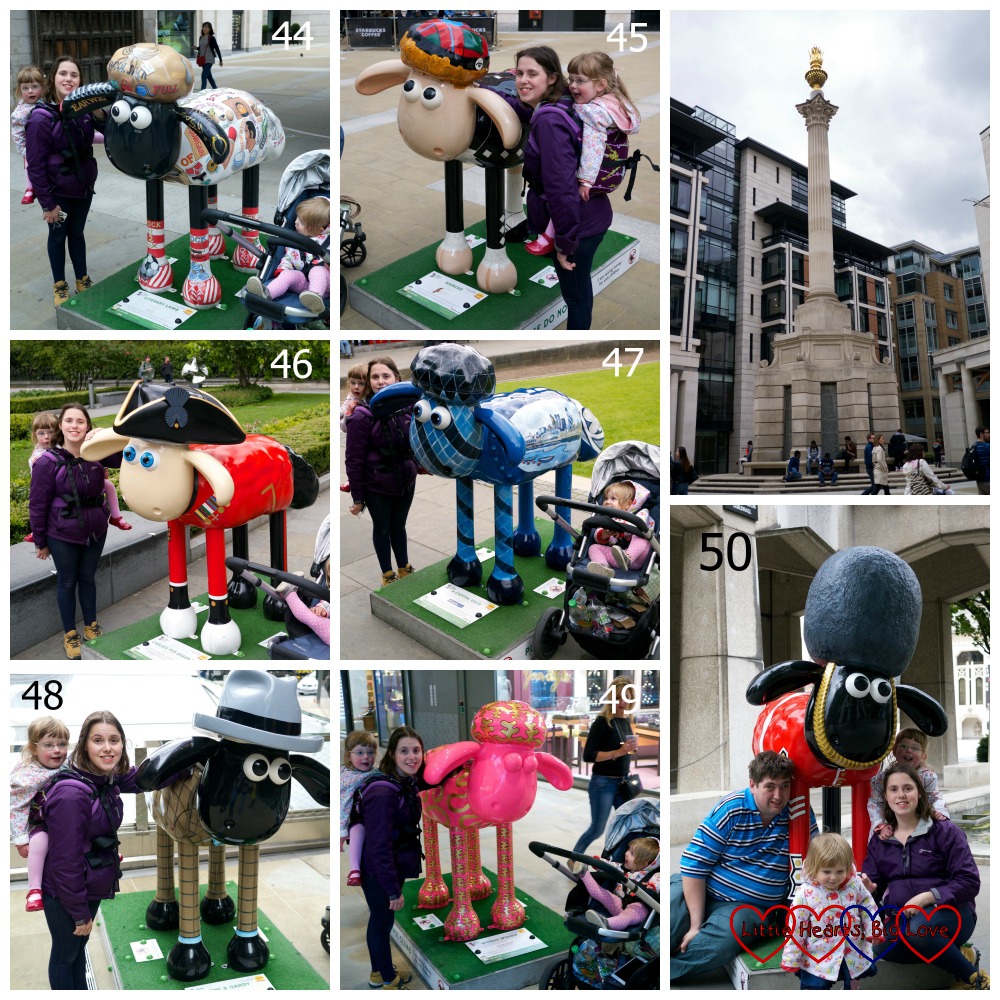 The London trail has ended now but another flock of 70 Shauns are due to appear in Bristol on 6th July and will be there until 31st August. I have to say, I’m quite tempted to book a long weekend and try to complete the collection!

13 thoughts on “Shaun in the City: London”