The Sweet Revenge of the Football Widows tells the story of four very different women – Belle, Maz, Ginny and Anna – who, frustrated by their partners’ constant obsession with the beautiful game, decide to take their revenge in various subtle (and not so subtle) ways. 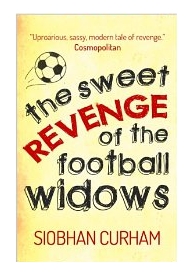 For me, this story was much less about getting even and more about self-discovery. Three of the main characters – Belle, Ginny and Anna – undergo quite significant personal journeys throughout the book. It was interesting to see their stories unfold and their characters develop as the book progressed. The way their characters evolved felt very natural too. They were all still very much the same people at the end of the book and yet changed at the same time. The only one of the quartet who didn’t seem to have much of a personal story arc was Maz, but then she seemed the only one who was mostly content with her life anyway and less irritated by being a football widow.

I loved the characterisation of the women in this book. They were so true to life. I suspect many women reading this book would find elements in at least one of the four main characters that they could identify with – restless and passionate Belle; timid, artistic Anna; snobby perfectionist Ginny and brash extrovert Maz. Ginny was probably the most difficult character to warm to in many ways. However, her underlying vulnerability gave her enough of a sympathetic edge for her to become a little more likeable.

The football-mad men (with the exception of Anna’s abusive partner Tom) were also mostly portrayed in a sympathetic way. This book could have very easily portrayed them in quite a negative light due to being more from a female perspective. The fact that it didn’t was one of the many strengths of this novel. Seeing how Tom appeared to be quite a catch from Belle’s perspective also showed how domestic abuse can be so invisible when looking from the outside in. Anna appeared timid and socially awkward whereas Tom appeared to be completely charming. Seeing Anna’s point of view gave a very realistic insight into how many victims of domestic abuse feel. Whilst there were many moments when she frustrated me by not standing up for herself, I also understood why. Watching her slowly embrace the person she was and move forward was a highlight of the book.

As the story gained momentum in the second half, I found it hard to put it down! I loved the final little twist at the end of the book which rounded the story off beautifully.  Overall, a very enjoyable read for football widows and non-football widows alike.