The Edge of Dark tells the story of two women, born more than four hundred years apart, whose lives become interwoven through their involvement with Holmwood House, an Elizabethan mansion. Roz Acclam has returned to York for the first time since the age of five, when she was adopted by her aunt and uncle after her family were killed in a fire. She has no memory of the fire or the brother who started it but since her return to York, the memories that are overwhelming her are not those from her own life, but those from a woman called Jane who married into the Holmwood family and whose story is demanding to be told. Is Roz possessed by Jane’s spirit? And is she the only one at Holmwood House under the grip of a restless spirit? 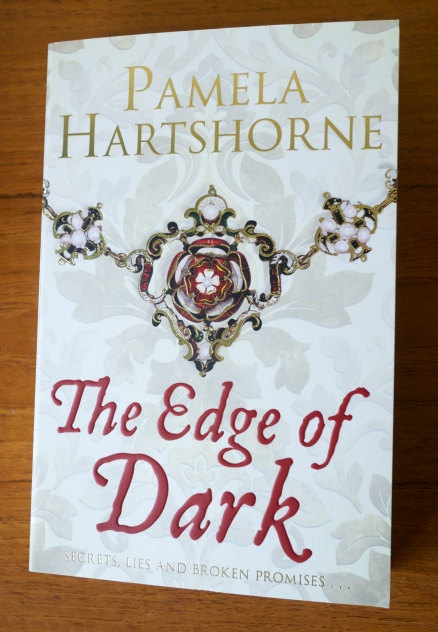 The book starts with a glimpse into the night that Roz’s family died and the moment when Roz as a small child is hidden in the garden shed by her mother to keep her safe. The adult Roz has no memory of the fire, or of her brother Mikey who started it, and only discovers the truth about how her family died after her aunt’s death, having been led to believe that they had been killed in a car accident. With her marriage under strain due to her husband recently finding out that he has a teenage son, she leaves London to accept the job as events director at the newly restored Holmwood House.

For Jane, the daughter of a butcher, marriage to Robert Holmwood is a step up the social ladder into the gentry. But her married life is an unhappy one with her husband and mother-in-law intent only on each other and when her sister Juliana discovers she is pregnant outside of wedlock, Jane’s desire for a child leads her to make a promise that will determine the course of the rest of her life.

From the very start of the book, I found myself swept up in the two stories, beautifully woven together. The moments where Roz finds herself taken over by Jane and the shift into the consciousness of the second character were subtle and seamless. Each time that Jane’s story shifted back to Roz in the present day, I was left with a desire to learn more about what happened next that kept me reading and made it hard to put the book down at times and whilst there were clear parallels between the modern day characters and the Elizabethan characters, the individual characters themselves remained very distinct and definite. I loved the complexity of both Roz and Jane which made them interesting, and Geoffrey, the son that Jane claims as her own, is chillingly evil, but one or two of the more minor characters felt slightly caricatured, particularly Adrian, the owner of Holmwood House.

Overall, this is a story full of suspense, with heartbreaking moments and a powerful and gripping ending and one that is likely to appeal to fans of historical fiction.

I received a complimentary copy of the book in order to review.  All thoughts and opinions are my own.

7 thoughts on “Review: The Edge of Dark – Pamela Hartshorne”