Over the past few weeks, the girls and I have enjoyed several baking sessions.  We’ve made cupcakes and cake pops, cookies and chocolate cake.  During our baking sessions we’ve been using the items supplied in the Real Baking Great Baking Set, and this week we also tried out the chocolate pen too, both of which we were sent by Vivid Real Baking.

The Great Baking Set contains a useful selection of baking items – 2 bowls (one large, one small), 1 suction cup, 3 measuring spoons, 1 silicone cupcake tray, 16 cupcake cases, 3 piping bags, 1 icing nozzle and 1 egg cracker.  The bowls are a good size for children to use – although not big enough to hold cake mix in the quantity we usually make.  They’re good for measuring out ingredients though and we also used them when sharing the cake mix out for the girls to fill their own cupcake cases.  The suction cup is quite handy for helping keep the bowl firmly on the table when stirring and mixing. 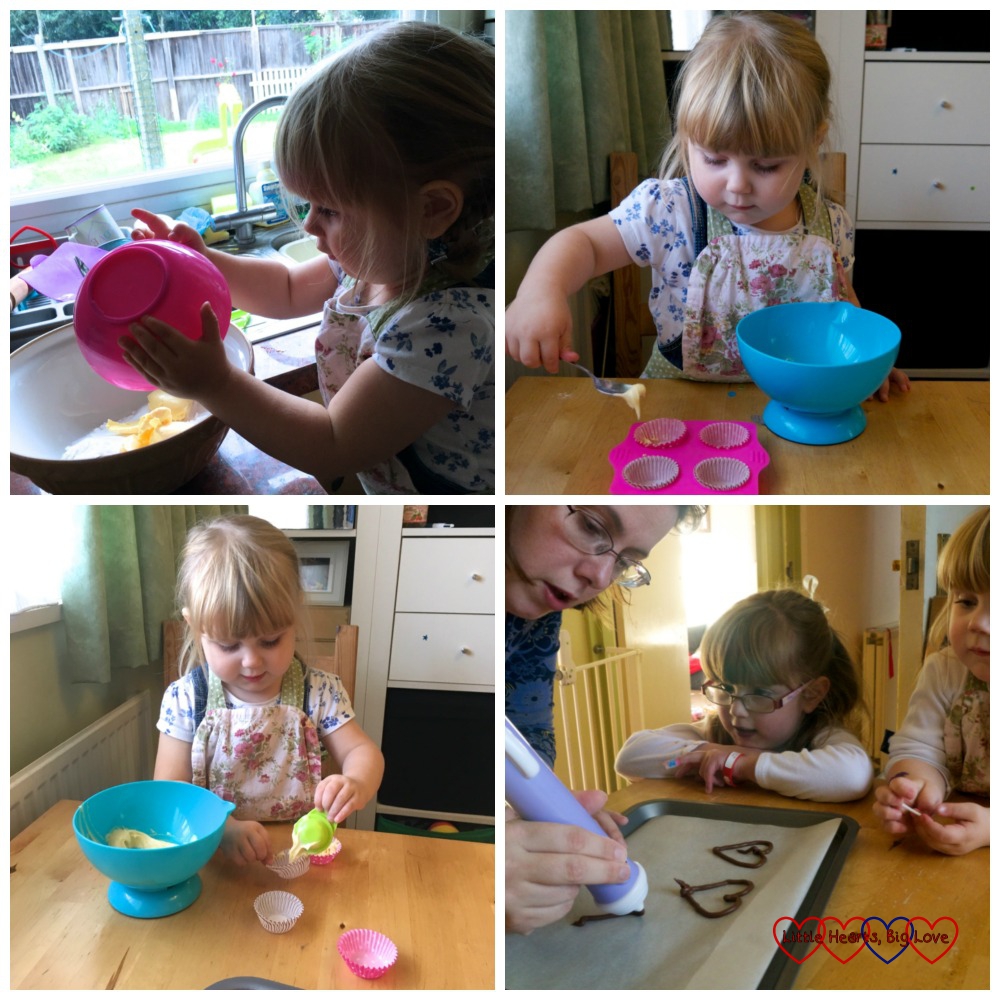 The egg cracker was our favourite thing in the set – the girls love helping crack eggs but often end up getting shell in the bowl.  With the egg cracker, they can crack the egg into the tray at the bottom and keep the shell out.  This has now become a key item when baking together.

The measuring spoons came in ½tbsp, 1 tbsp and ¼ cup measures.  We don’t tend to measure in cups so the only one that was really useful when measuring ingredients was the 1tbsp spoon.  I would have found a 1tsp measuring spoon much more useful than a ½ tbsp one. The ¼ cup spoon was a good size though for putting cake mix into the cake cases.  It was a shame that the tray only held four of them though – a bigger tray would have been much better.

We found the piping bags easy to use for adding chocolate or icing toppings on the cakes and cookies.  Overall the set was easy to use for both my girls (aged 5 and almost 3).  I would have liked to have seen some utensils included in the set along with some recipe suggestions though and a bigger cupcake tray. 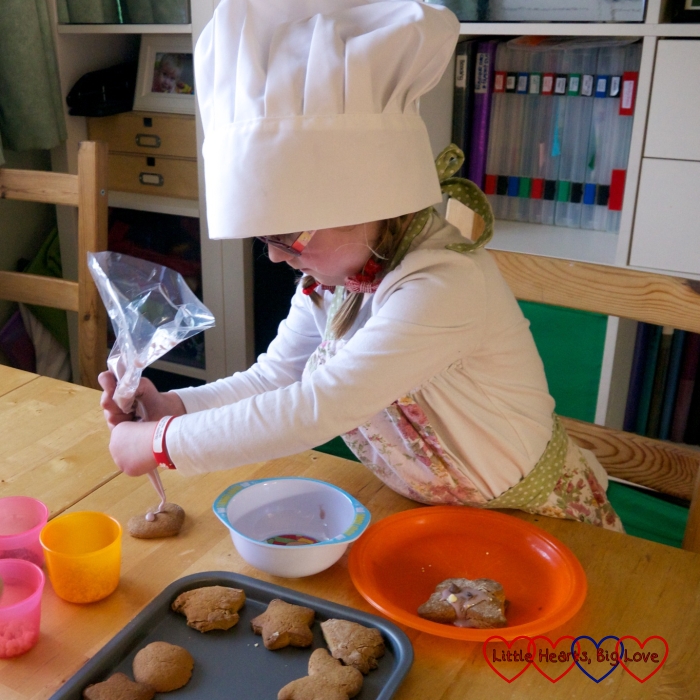 The chocolate pen looked like it was going to be a lot of fun – it came with 3 mould trays, 4 nozzles, clamps and caps and 12 pouches to fill with chocolate.  We were also sent a couple of bars of Divine Baking Chocolate to use with the chocolate pen.

The pen takes 2xAAA batteries which aren’t included.  It basically works through using a plunger to push against the pouch of chocolate to make it flow.  Before the pouches can be used in the pen, they need to be filled approximately three-quarters full with chocolate, a nozzle attached with one of the clips and then stood in hot water for a few minutes to allow the chocolate to melt.  You need to make sure the chocolate is fully melted before using it in the pen – we were a little impatient on our first attempt and it didn’t work so well! The pouches are slightly tricky to insert into the pen – I found them a little too long and ended up cutting the pouches down slightly in our later attempts to use the pen which was a little easier.  I would also recommend putting a cap on the nozzle when filling the pen as the button was just in the right place for me to keep pressing it whilst trying to put the pen back together again! This stage was too fiddly for the girls to do. 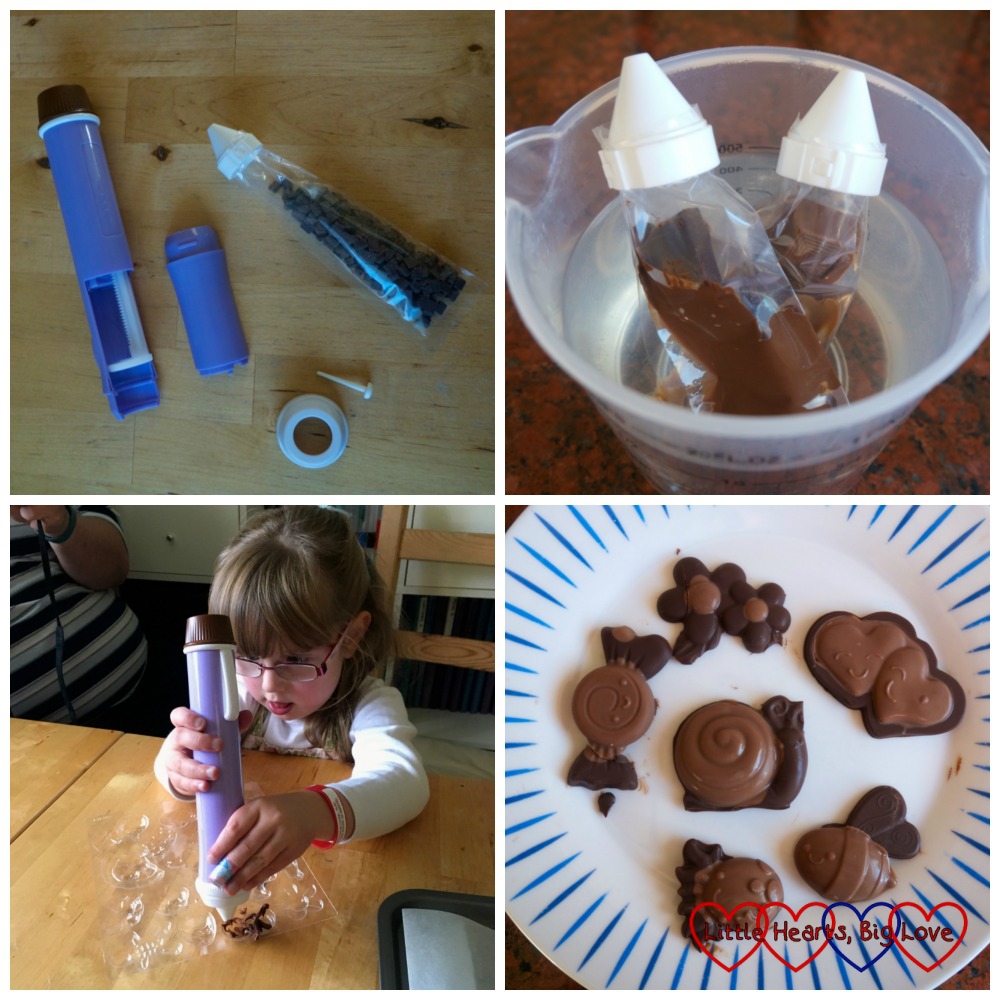 Once the pen is assembled, it is easy to use.  Simply press the button and use the pen to draw patterns on to baking paper or fill the moulds.  The moulds are layered and different colours of chocolate can be used to create details.  Again this was too tricky for the girls who just happily filled the moulds but I had fun getting creative.  Once the moulds were filled, we placed them in the freezer for a few minutes for the chocolate to set.  I didn’t find it easy to get the chocolate out of the moulds (the instructions suggest turning it upside-down and tapping gently which wasn’t very effective) and some of the chocolates broke when trying to remove, although a few did remain intact.

Each pouch only holds enough chocolate to fill a few of the shapes in the mould – if you are planning on using all of them, you will need to have a few pouches of chocolate on the go.  The pouches could possibly be reused although I found them too difficult to clean well enough that I would have been happy to re-use them and so we have been treating them as disposable.  Replacement pouches don’t seem to be available but I have found some plastic pouches online measuring 5cm x 14cm which look like a good size for replacement pouches though.  You can buy prefilled pouches of different coloured chocolate online but they are very expensive.  We will be buying some empty pouches and filling them ourselves!

We were sent a couple of recipes with the baking sets – one of which was a chocolate and passionfruit curd layer cake adapted from a recipe by Martha Collison, the youngest-ever contestant in the Great British Bake Off.  It was a more complicated recipe than I would normally use when baking with the girls, but it was absolutely delicious and the chocolate pen was very useful for creating some chocolate hearts to decorate the cake with! 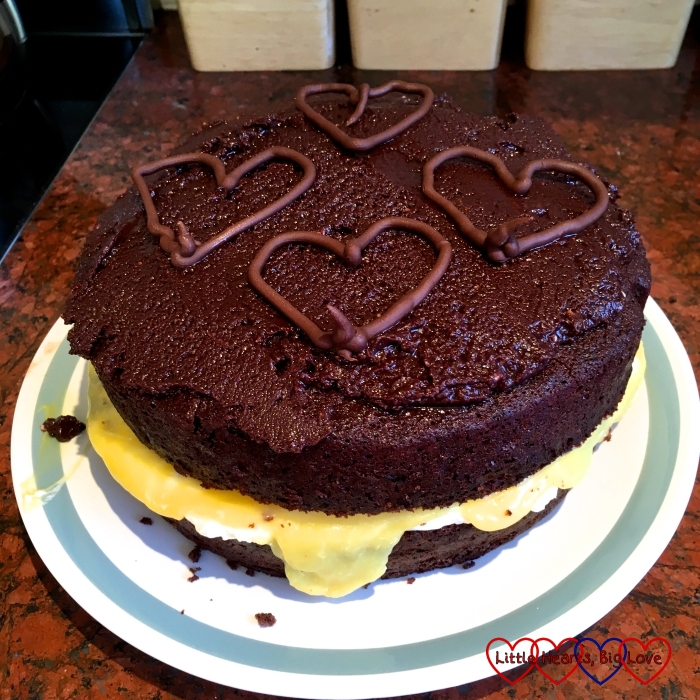 Disclaimer: I was sent a set of Real Baking products from Vivid to review.  All thoughts and opinions are my own.