Getting National Trust membership a couple of years ago was one of the best decisions we’ve made. There are so many lovely places to visit around the country and it’s always a good choice for a day out exploring with my family. I visited Baddesley Clinton with the girls last year and loved it. Packwood House is just a couple of miles away. We decided to visit both on the same day. 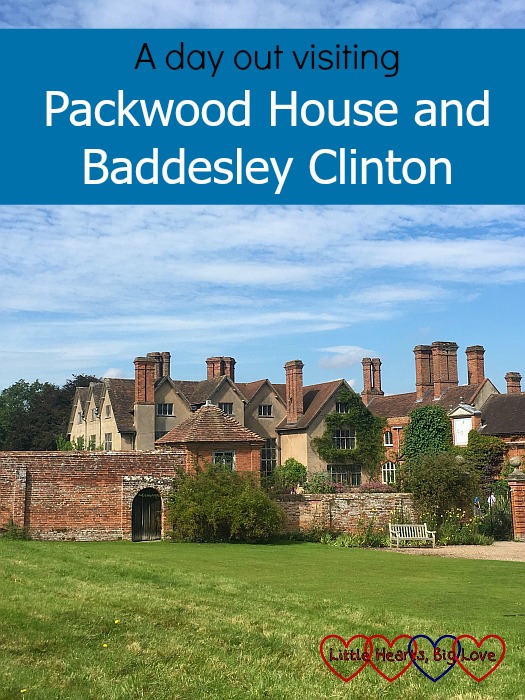 Both properties were built during the Elizabethan era in around the 1570s. Packwood House was originally home to the Fetherston family who were yeomen farmers. It was extensively refurbished and transformed into a Tudor country house in the 1920s and 1930s by Graham Baron Ash before being given to the National Trust in 1941.

We hadn’t been to Packwood House before. It was a busy day to visit, being a beautiful warm sunny August Bank Holiday Monday. We headed for the kitchen garden first where the pretty play house kept the girls busy for quite a while. Their imaginations soon turned it into a café. They had lots of fun serving the toys with food and drink. Hubby and I enjoyed sitting in the sunshine with the girls occasionally bringing us a pretend cup of tea. 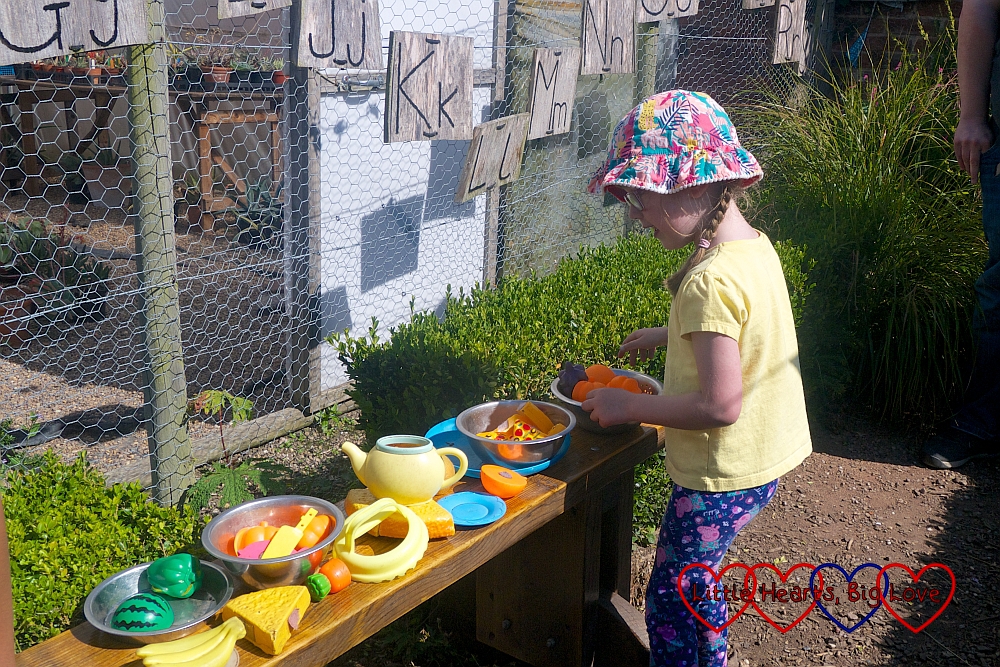 The kitchen garden was pretty, but the paths were a little tricky to navigate with the buggy as they were quite narrow. This turned out to be the case on most of the paths around the house and gardens. It wouldn’t have been quite so bad on a quieter day. There were times though that it seemed there were streams of people coming in the opposite direction and it was hard work trying to make our way around at times. 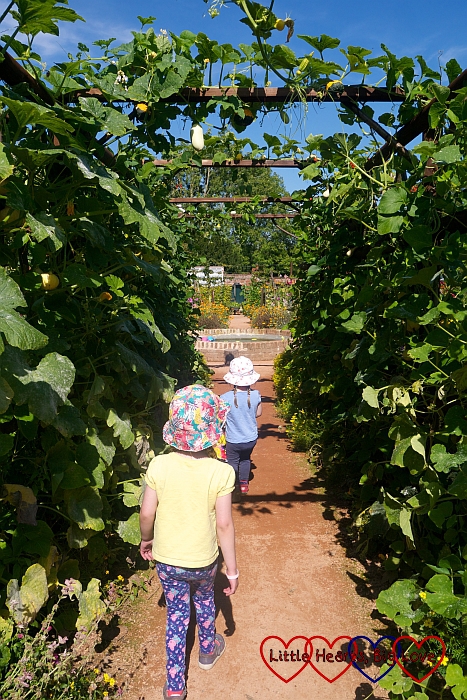 The yew garden was a little quieter though. We took the route around the edge of the orchard to avoid the steps. Jessica and Sophie had a wonderful time playing hide and seek in amongst the trees. I wasn’t all that keen on the topiary though – I like my trees to look a little more natural! The yew gardens are also very fragile. It felt like I spent most of the time there telling the girls not to touch the trees in case they damaged them. I enjoyed the view of the garden from the top of the spiral path more than being in the garden itself! The spiral path isn’t buggy-friendly but Jessica was happy to walk. 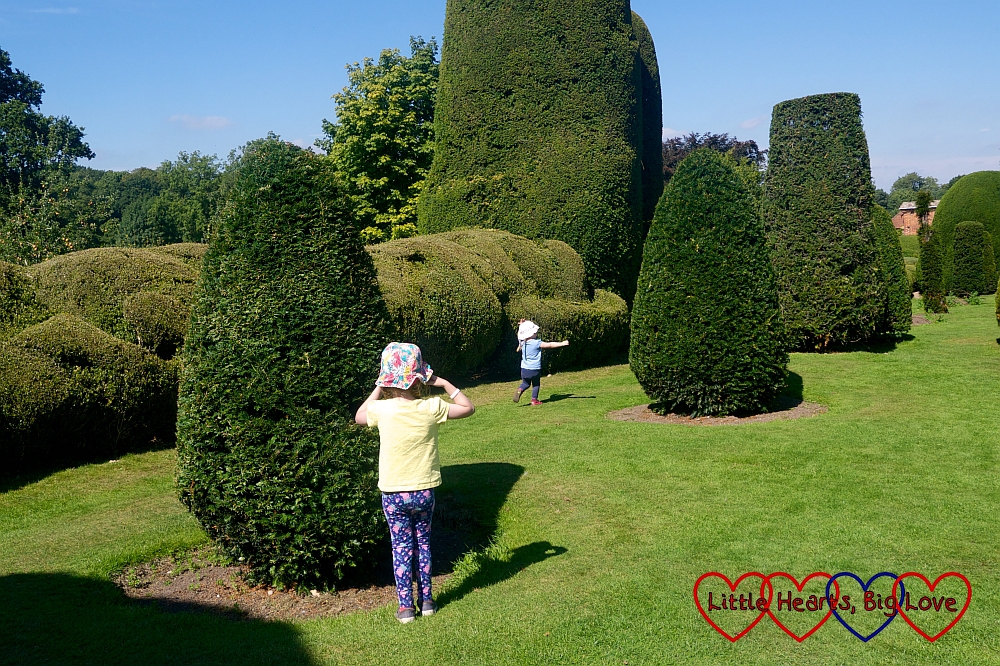 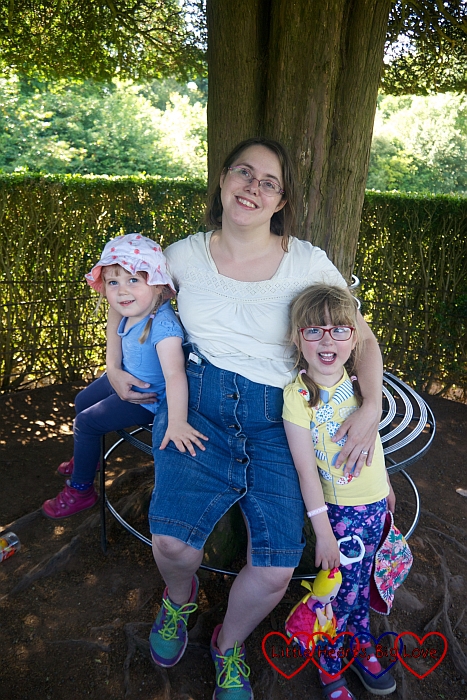 We also found the café wasn’t very buggy-friendly either. It’s a typical problem of places on very busy days though. People move chairs and tables all over the place without thinking about whether it blocks access for others. We eventually found some space to sit near a tree outside. I sent hubby in to get food as I was starting to get hangry and stressed! 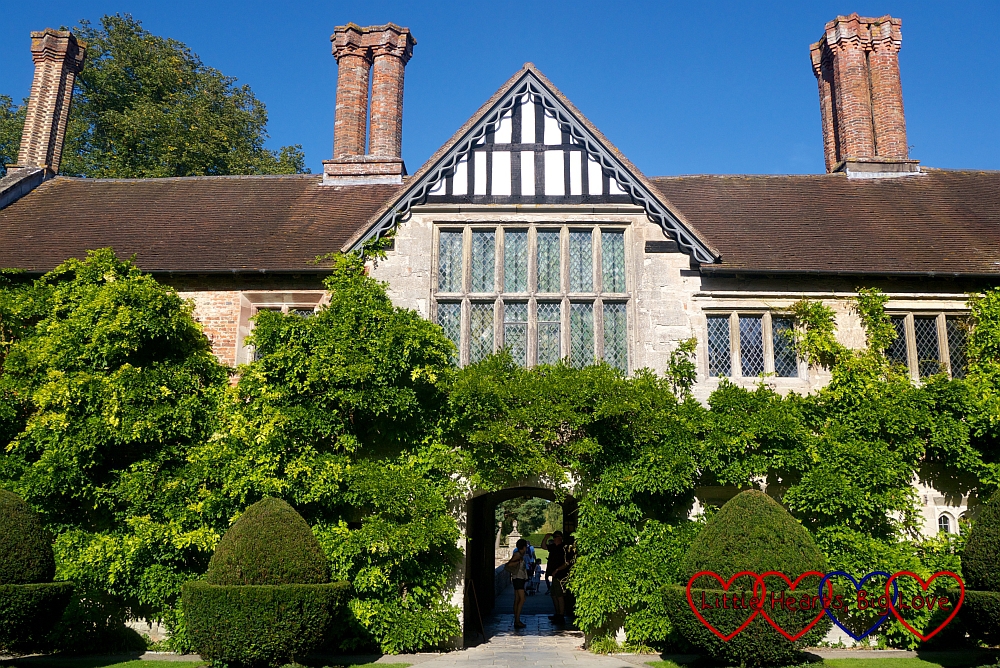 I have to confess that although Packwood House was very pretty, it was a relief to get in the car and head down the road to Baddesley Clinton. Out of all the National Trust properties I have visited so far, this one is my favourite. It’s such a beautiful place to visit. Although it’s quite small, it feels like there is plenty of space to move about in. I love the Elizabethan house with the surrounding moat, the entrance through the gatehouse and the pretty courtyard. 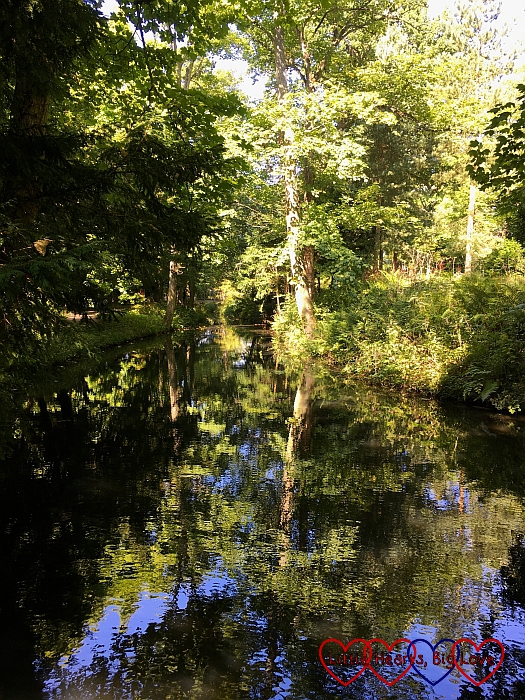 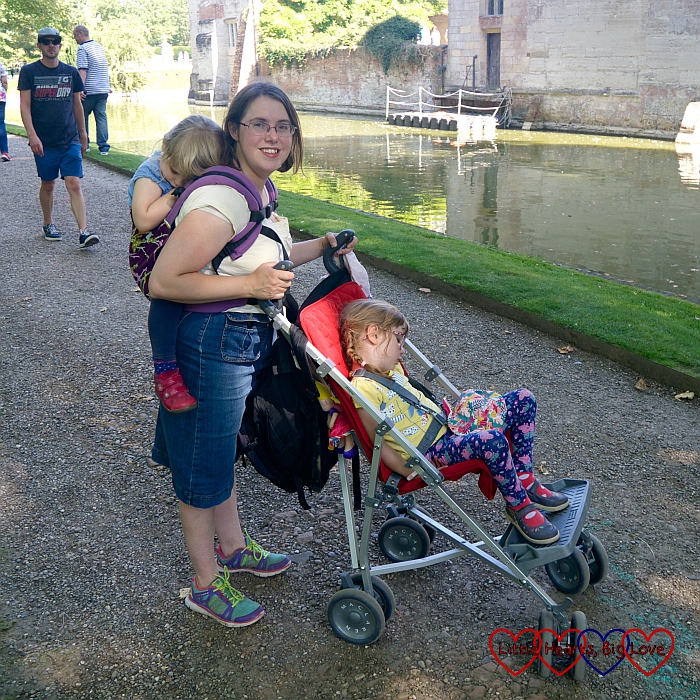 Two National Trust places in one day were perhaps a little too much for the rest of my family though. At one point I had Sophie asleep on my back, Jessica asleep in the buggy and hubby dozing on a bench! I quite enjoyed sitting and relaxing while everyone else had forty winks. 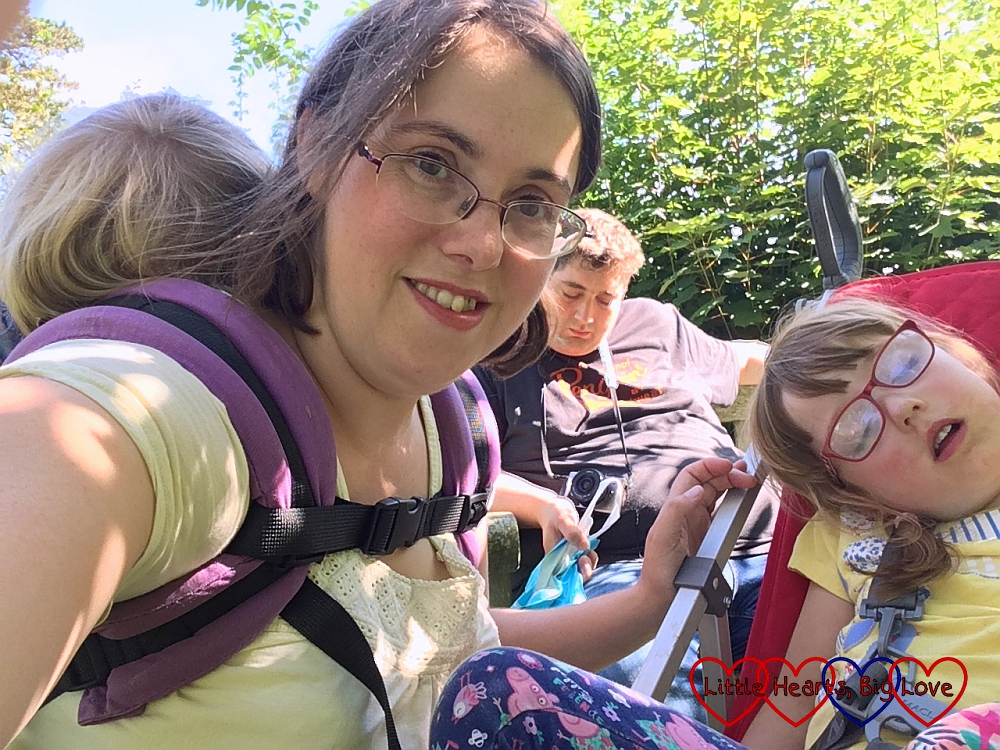 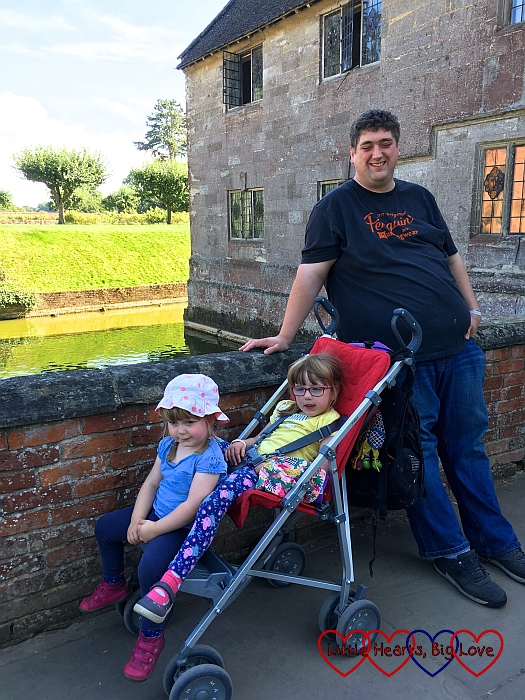 We did manage a little walk around the grounds though and Jessica and Sophie woke up by the time we got back to the house again. They had fun playing with the big connect-4 game and giant Jenga on the lawn. It was the perfect way to end a lovely August bank holiday weekend. 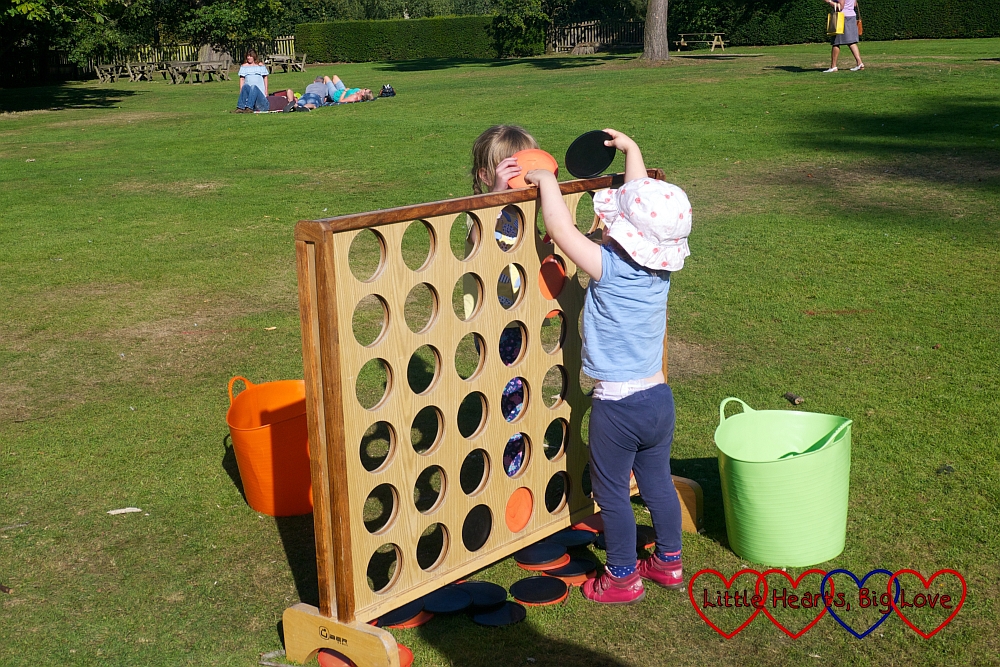 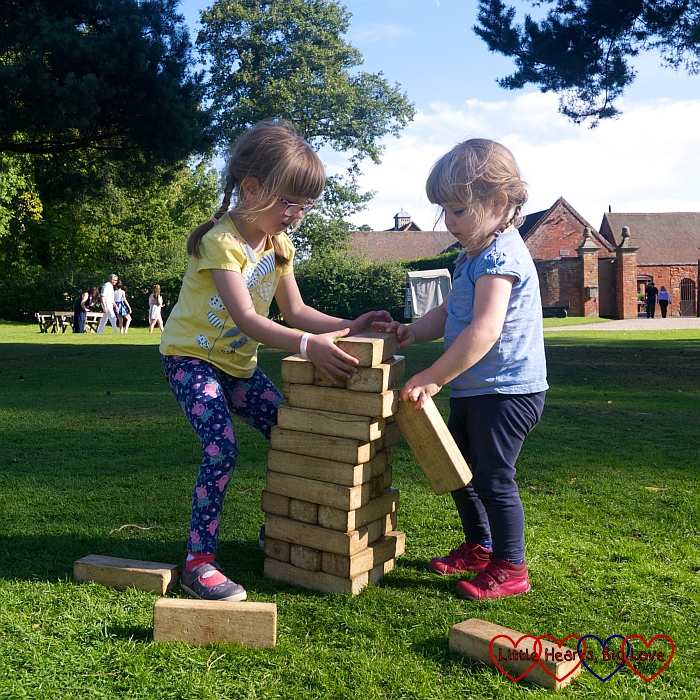 I’ve since discovered that there is a children’s play trail at Baddesley Clinton. Hopefully we’ll come back again next summer and get to explore it then.