We spent a couple of days in south Wales during the Easter weekend whilst completing our Paralympic gold postbox challenge. As well as visiting the gold postboxes though, we also took some time to visit the National Showcaves Centre for Wales in the Brecon Beacons National Park. 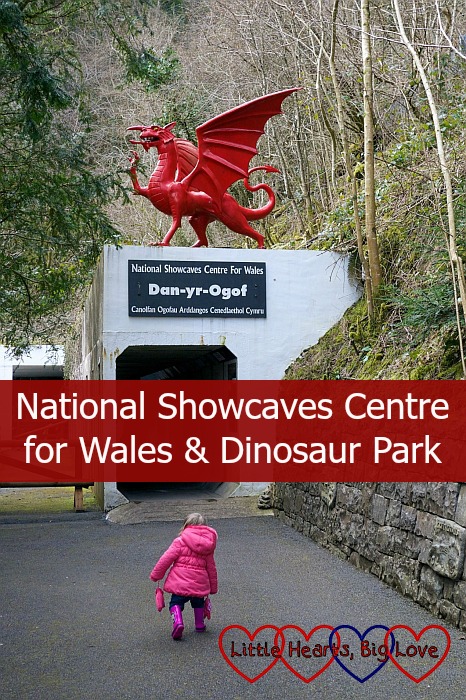 It was hubby’s suggestion to visit – he had been here once before on a school trip and had enjoyed it. I wasn’t so keen on the idea of visiting caves (they make me feel somewhat claustrophobic) but when he mentioned the dinosaur park, I knew that it would definitely be something that would appeal to the girls. 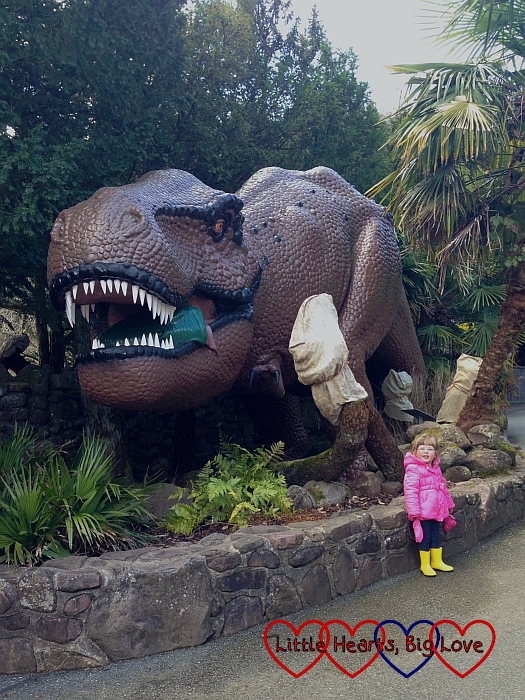 The National Showcaves Centre has three different caves which you can visit. The first of these is the Dan-yr-Ogof caves where you can walk through about a kilometre of the cave system (which is about 17 kilometres long in total). Whilst the cave was quite beautiful in places, I have to confess that it was quite a relief to get above ground again although the girls seemed to both enjoy it. 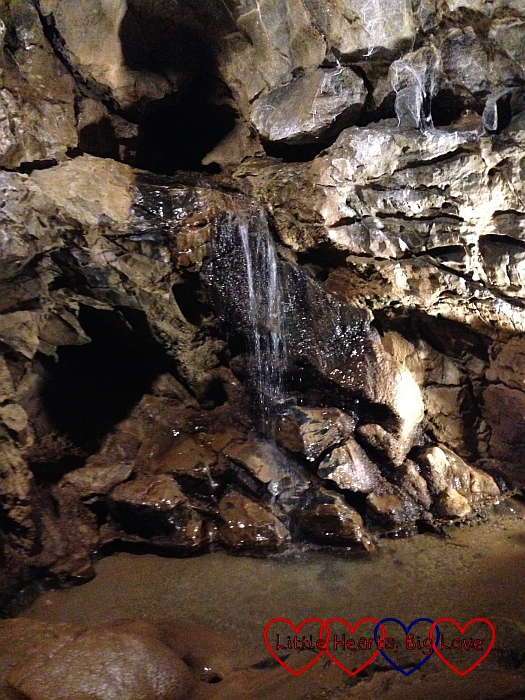 We let Sophie walk for a little bit when we first entered the cave but once we got deeper into the cave it was much easier and safer to put her in the carrier. 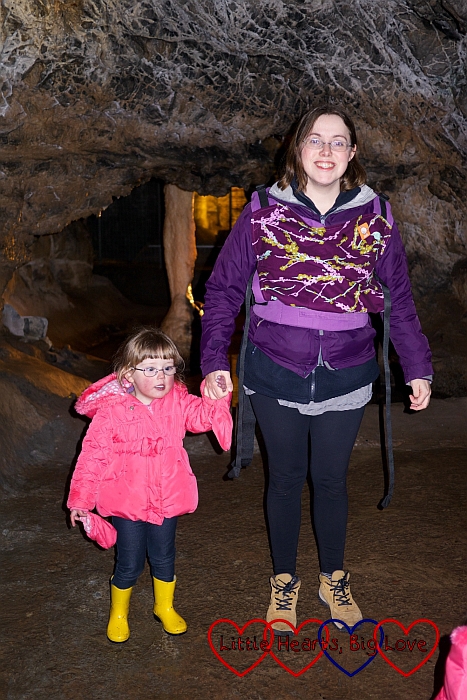 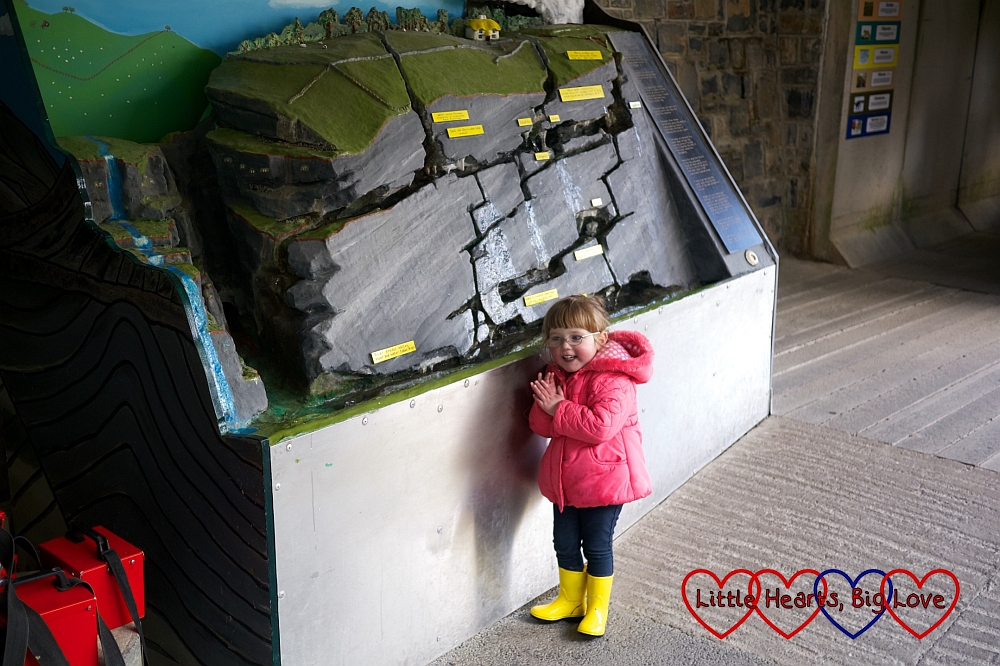 The second cave is Cathedral Cave which has huge caverns and towards the end of the cave, the walkway takes you next to a couple of 40 foot high waterfalls. You can actually get married at the end of this cave.  Sadly I didn’t manage to get any decent photos inside the cave itself though.

I’d had enough of caves by this point and the girls were more interested in seeing the dinosaurs so we didn’t visit the third cave, Bone Cave, where 42 human skeletons were found – hence the name. 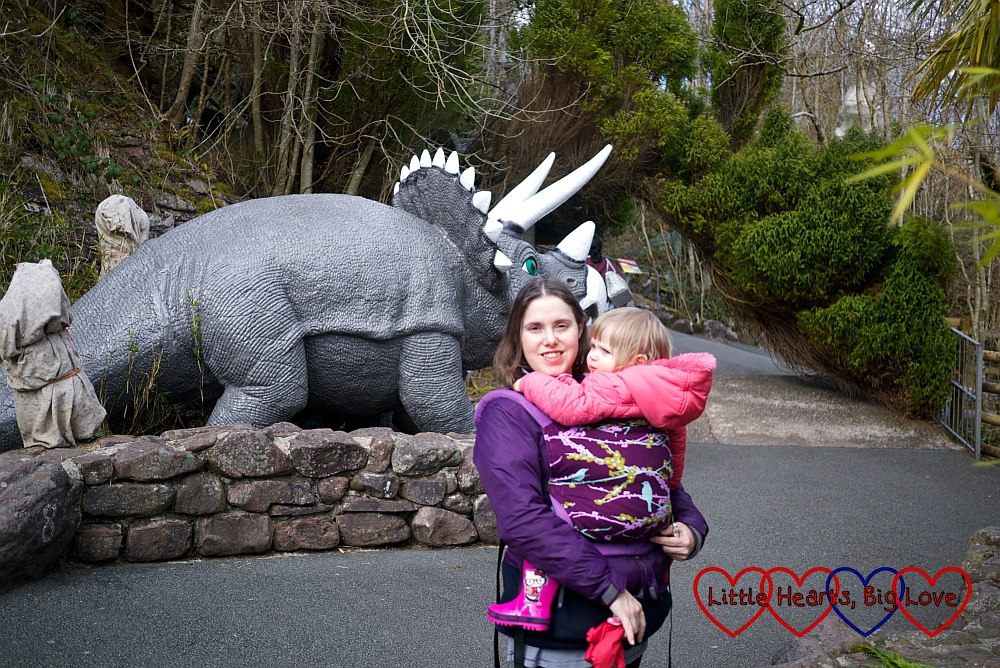 There was also a reconstructed Iron Age village which showed how people probably lived in around 700BC and Jessica enjoyed seeing the different animals in the village. 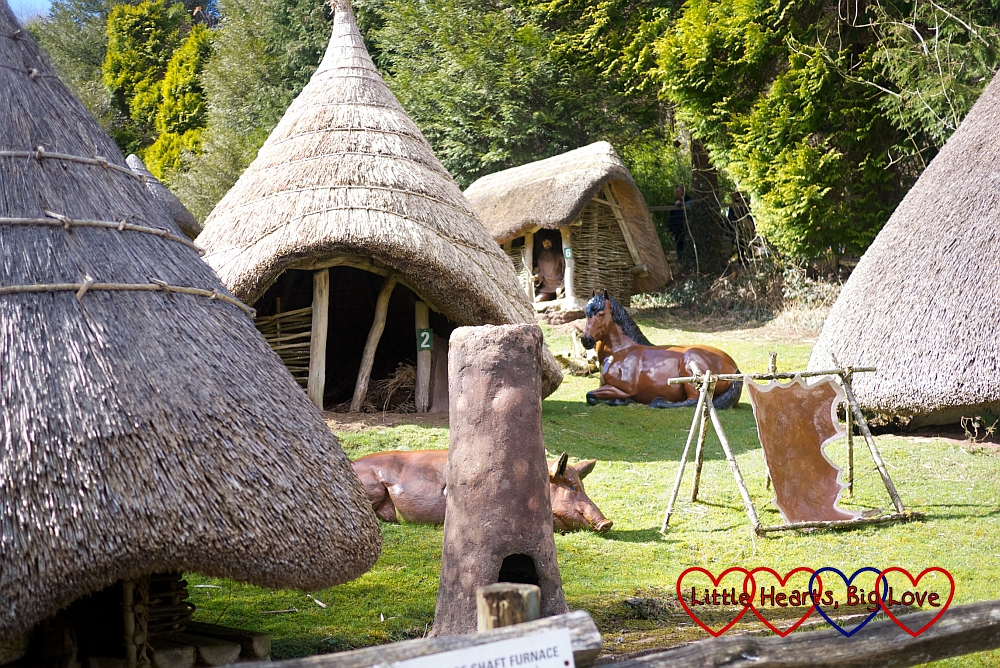 As expected, the dinosaurs were the biggest attraction as far as Jessica and Sophie were concerned – more than 200 life-sized models of different dinosaurs. I never realised there were so many different types and we felt very tiny standing next to some of the models! 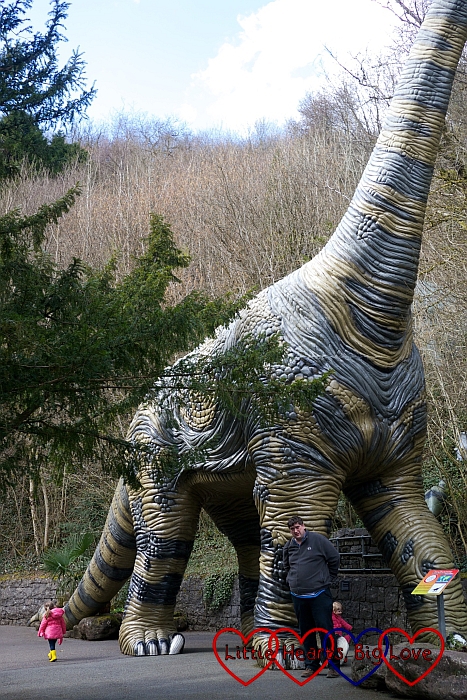 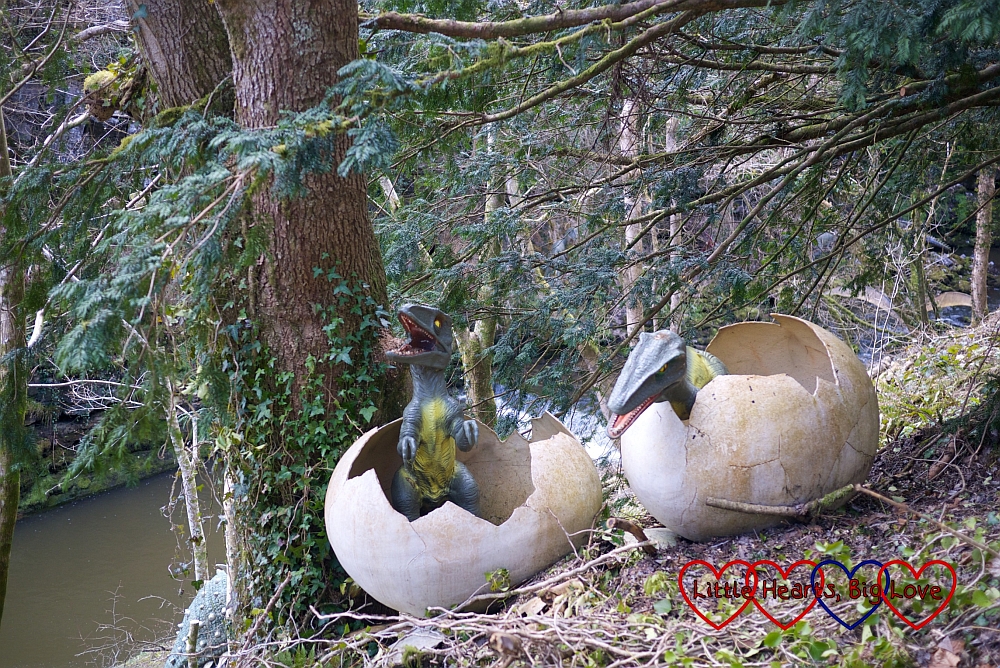 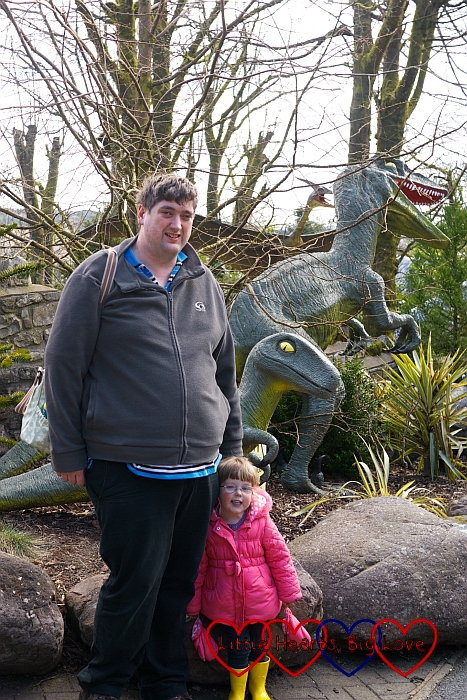 Jessica particularly enjoyed being able to paint her own dinosaur picture in the museum. It was set up with a computer screen and a white model of a dinosaur and whenever Jessica added splashes of colour or patterns, these were projected on to the model dinosaur in front of her. She was too little to see over the screen so kept poking her head round the side each time she added something to see the dinosaur change and got quite excited about it. When the picture is finished, you can email it to yourself and print off at home which we did. 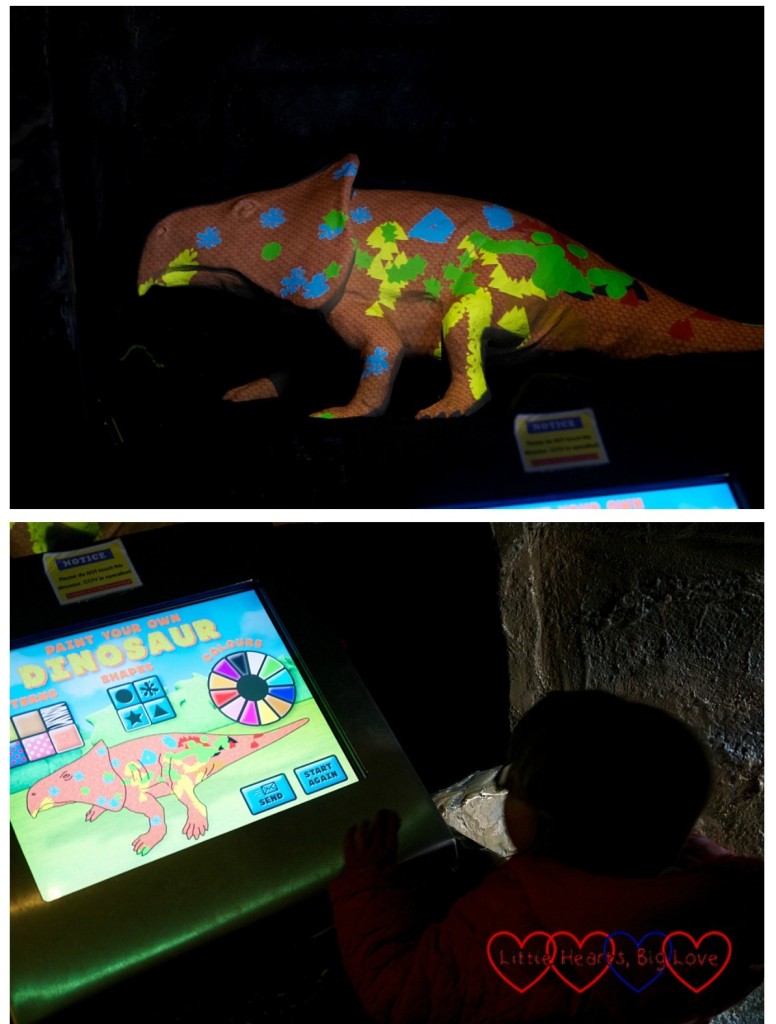 Tickets for the National Showcaves Centre cost £13.75 for adults, £9.50 for children (3-15) and under 3s are free. There are ten different attractions included in the ticket price – the Dan-yr-Ogof showcaves, Cathedral Cave, Bone Cave, the museum, dinosaur park, Iron Age village, Mr Morgan’s farmyard, the Shire horse centre, Barney Owl’s play area and the Millennium Stone Circle. We didn’t visit the last four of these as we ran out of time although did see some of the farmyard animals – goats, alpacas and llamas – as we drove it. I think Jessica would have really enjoyed seeing these and it was a shame we weren’t able to do so but we enjoyed the day out despite not being able to fit it all in. 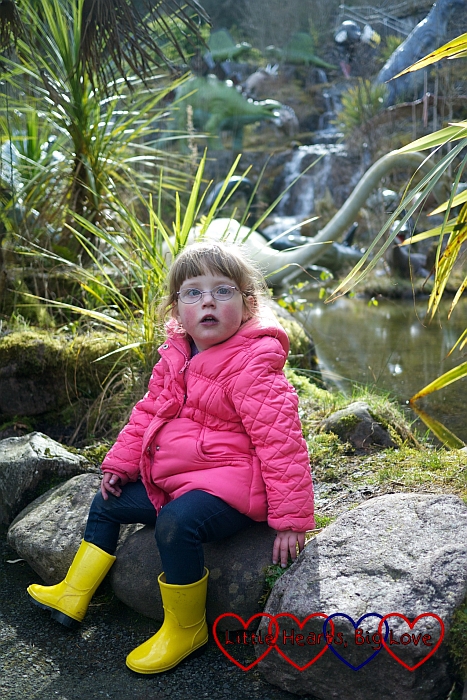