After learning about Christopher Columbus and his voyage to the Americas, our next topic was Neil Armstrong and the first Moon landing. This provided another good excuse for some space-themed crafting and a little small world play to help bring history to life. 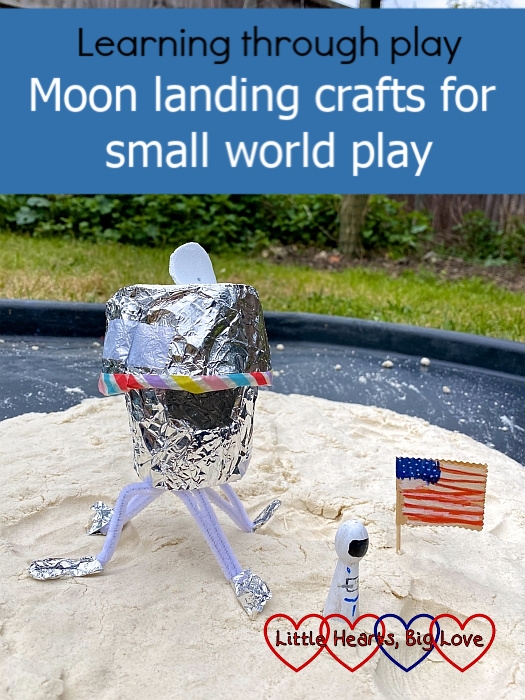 1) Use a mug to draw a circle on a piece of silver card and cut out.

2) Draw two circles on the silver card using a 1p coin and cut out. 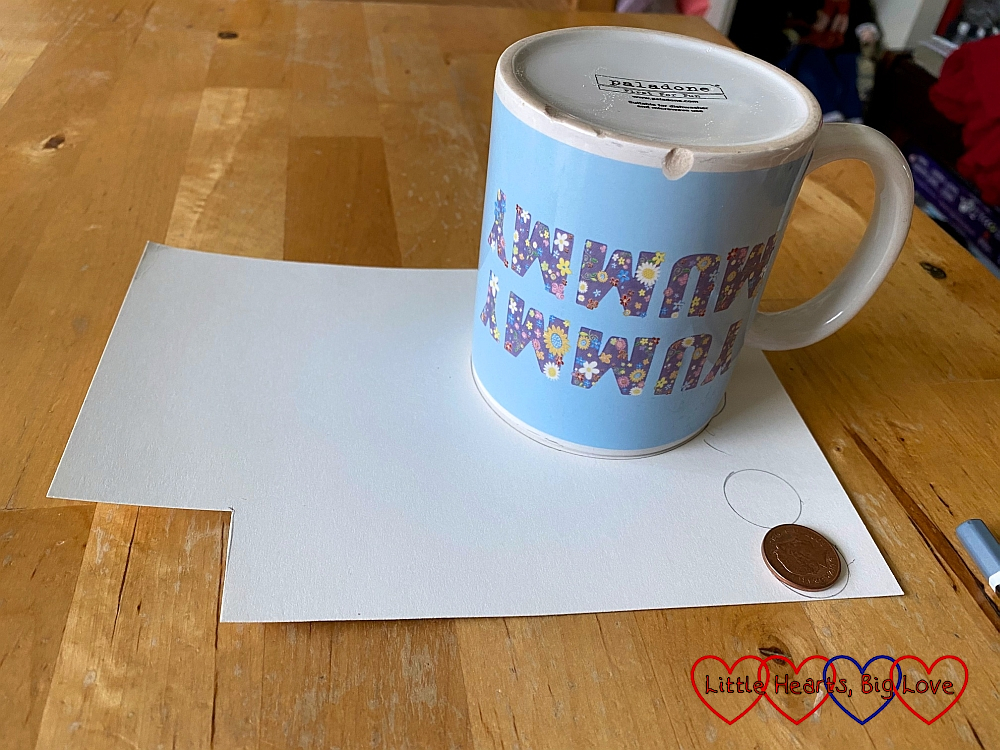 3) Draw four semi-circle shapes on the silver card and cut out. Cut a small slit in the top of each semi-circle. 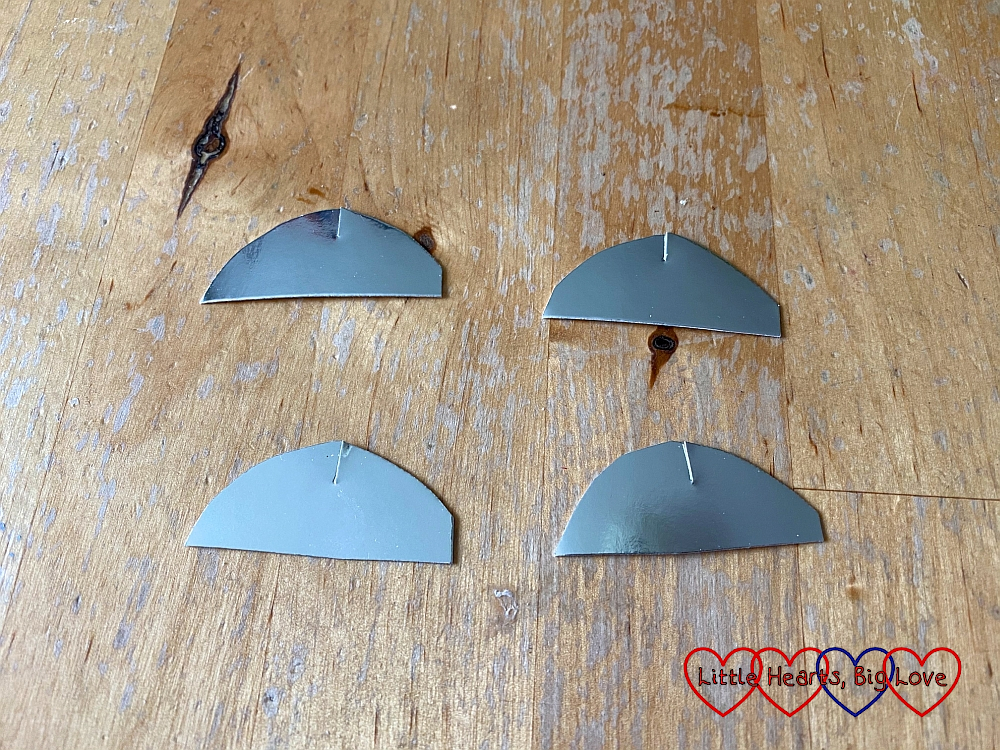 4) Cover the toilet roll tube with glue and cover with the coloured paper, trimming off the excess.

5) Cut a quarter segment out of the large silver circle. Tape the edges together to make a cone shape. Glue this to the top of the toilet roll tube. 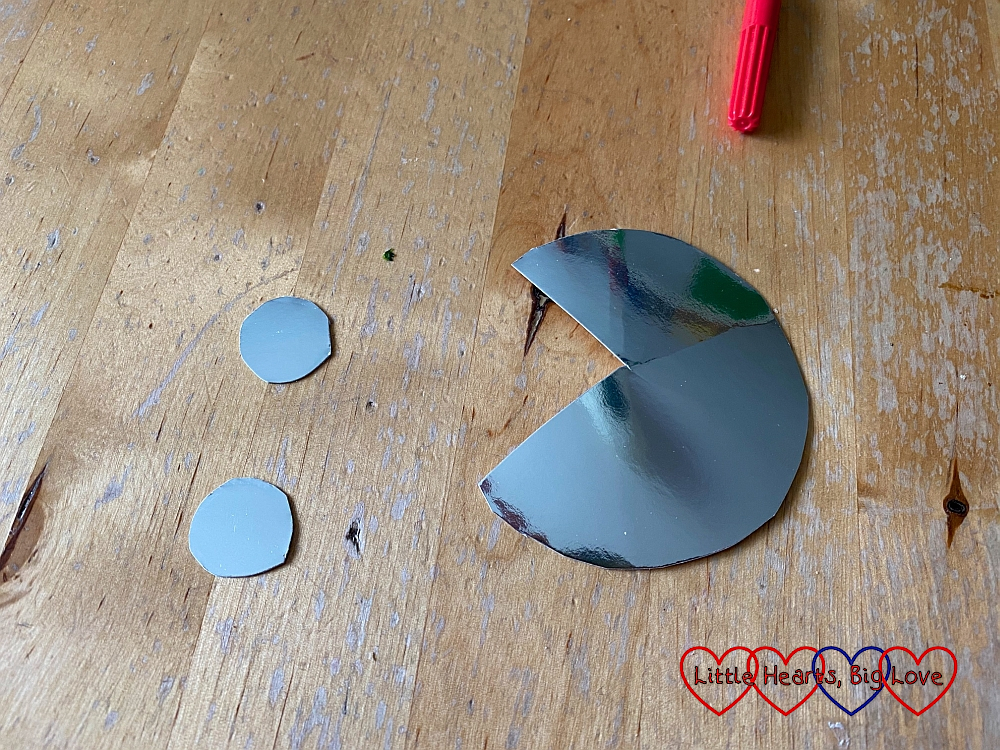 6) Glue the two circles to the toilet roll tube.

7) Cut four slits in the bottom of the toilet roll tube. Push a silver card semi-circle into each of the four slits. 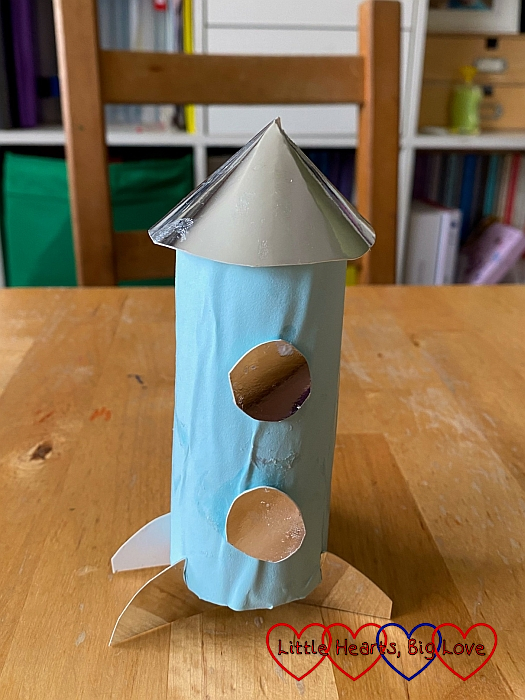 1) Cut the polystyrene cup in half. 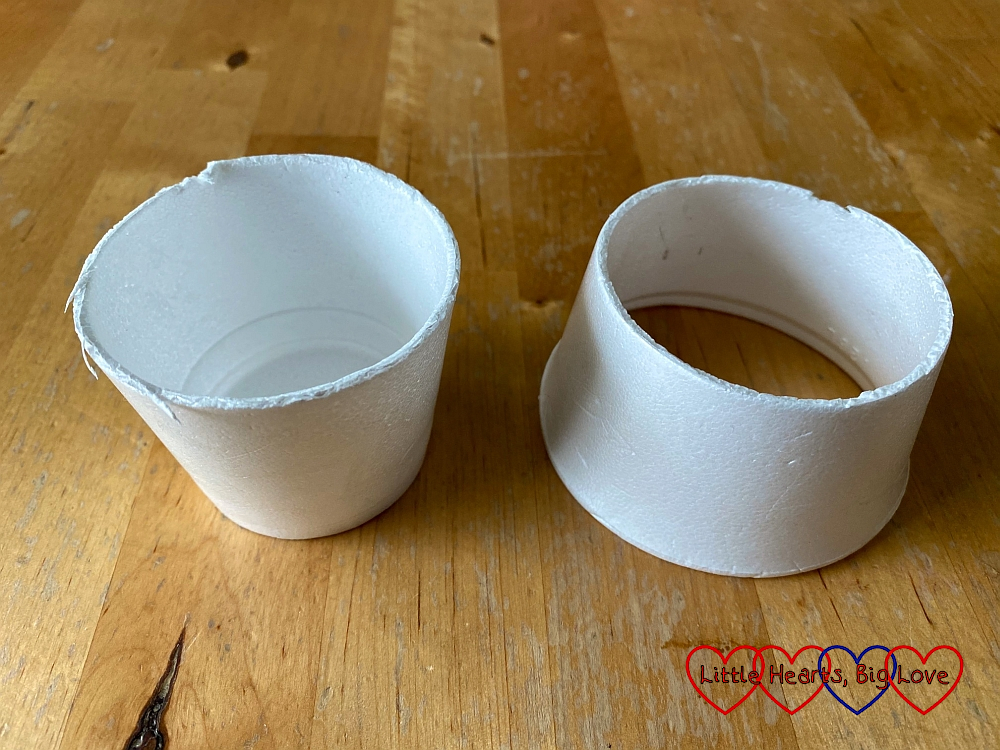 2) Cut a rounded opening for the lunar module out of the bottom half of the cup. 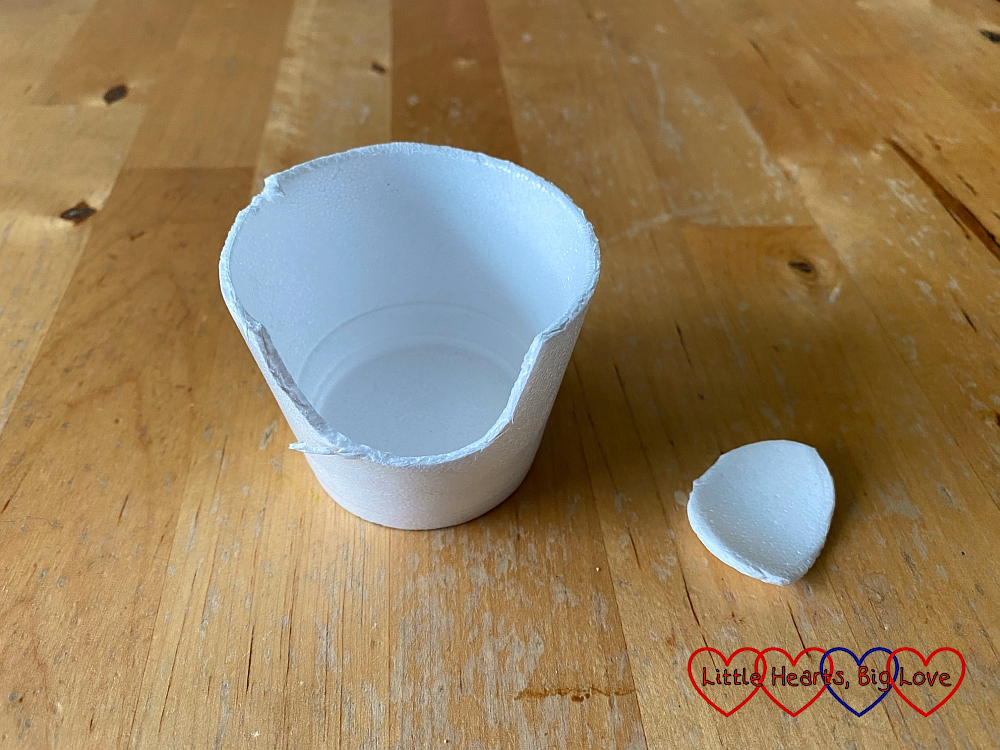 3) Trim the offcut from step 2 so that it is circular in shape and use a marker pen to draw a circle in the centre.

4) Cover the top half of the polystyrene cup in silver foil. We covered the top first and secured with sticky tape and then covered the sides. You can also use washi tape to add a decorative edge at the bottom. 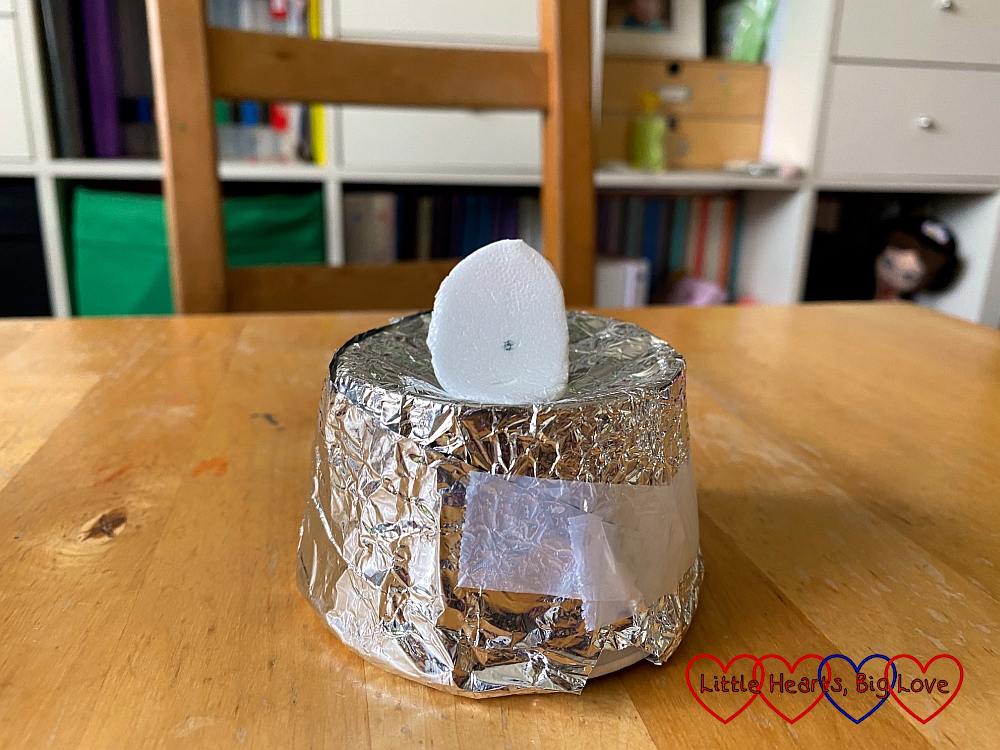 6) Cover the bottom half of the polystyrene cup in silver foil and use sticky tape to secure if needed. 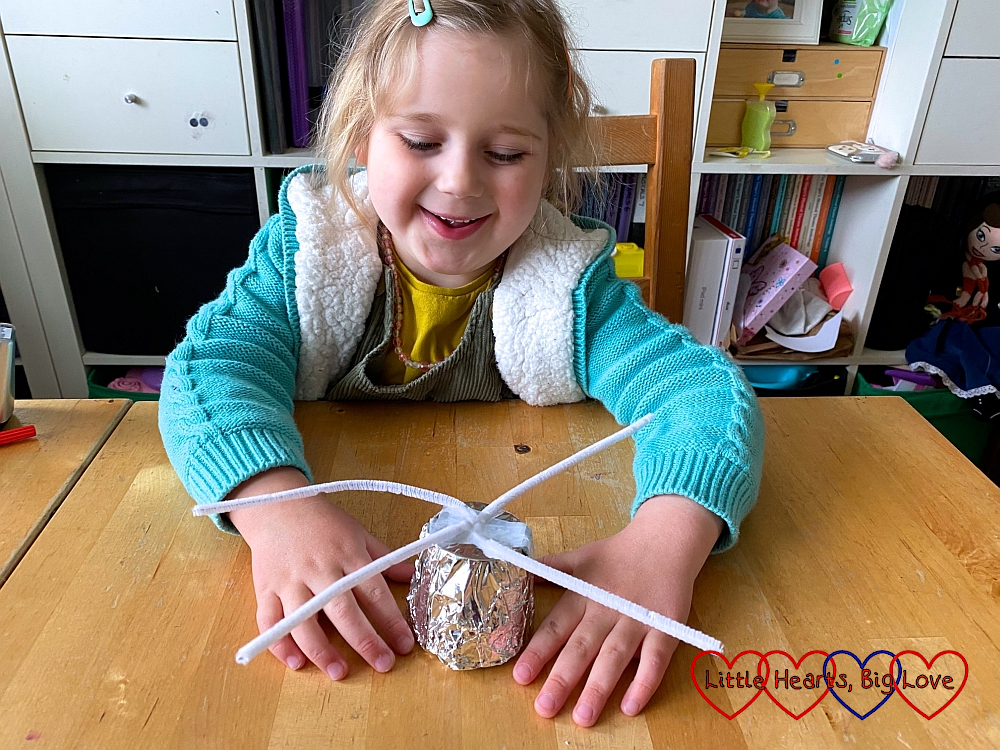 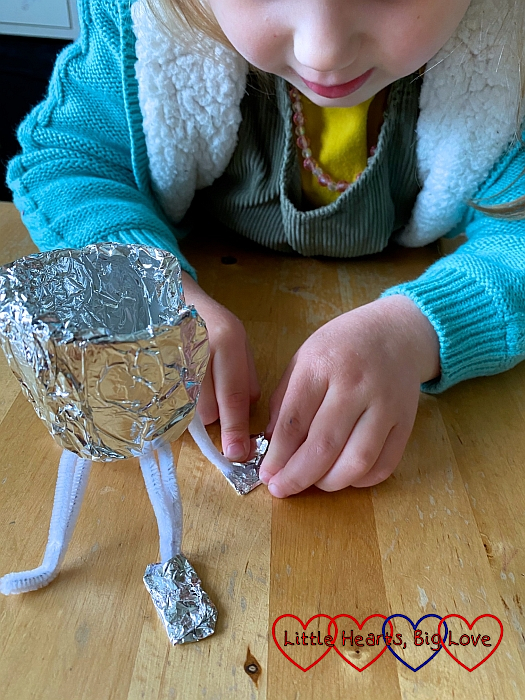 7) Place the top half of the cup on the bottom half and your lunar module is complete. 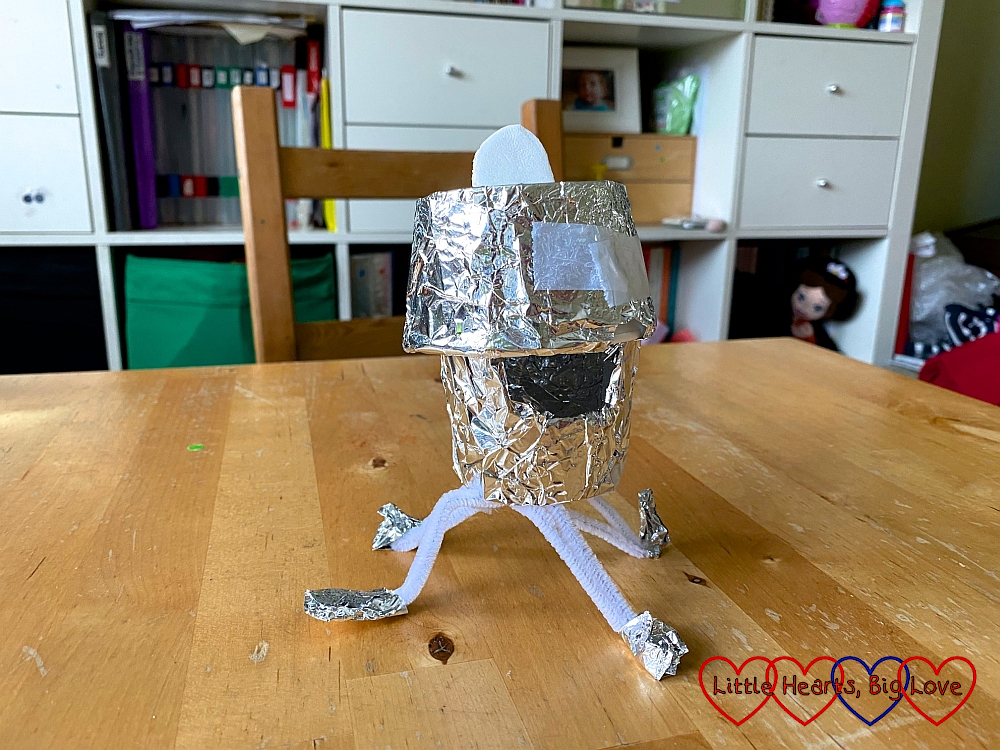 We also painted a small wooden peg to create our little astronaut. I made some moon sand by mixing eight cups of flour with one cup of vegetable oil and spread this out in the tuff tray to create our lunar surface. 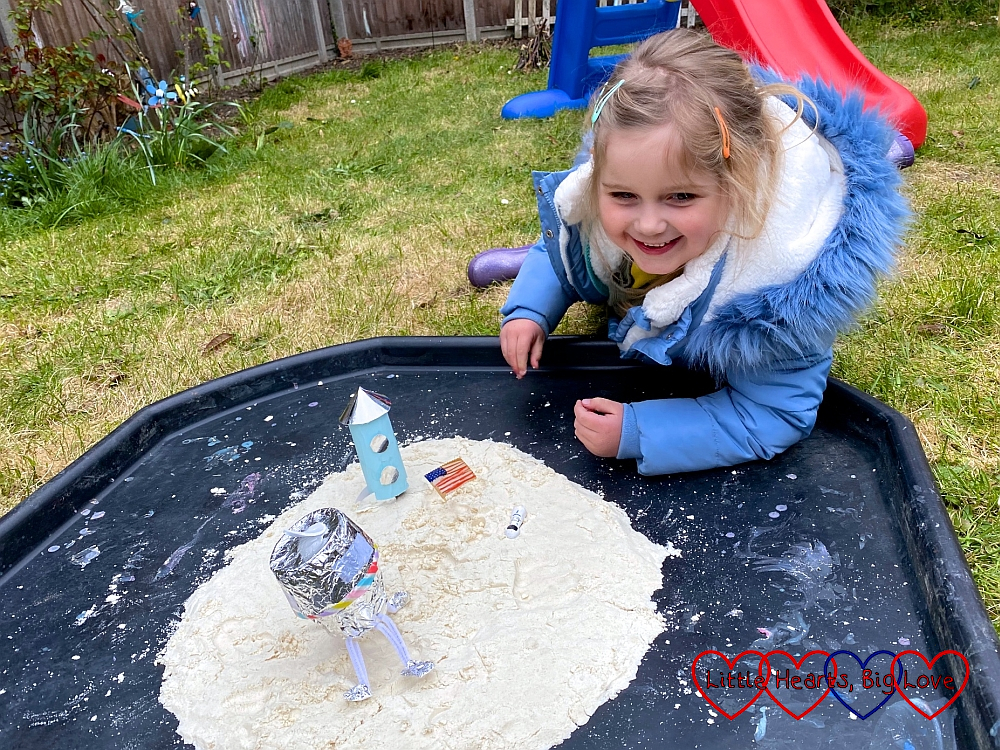 Sophie had a great time recreating the moon landings with her rocket and lunar module. Our Moon landing started off fairly conventionally (albeit with a rather bumpy landing). Our little peg astronaut took “one small step for man, one giant leap for mankind,” planted his flag and headed home again. After that, Sophie’s version of events was somewhat different. Her astronaut headed back to the Moon to make “moon-sand angels” and then some giants came along and stomped all over the moon before finishing off with turning the moon into a giant moon-sand castle. Don’t you just love imaginative play?