Our JoGLE for Jessica was almost complete – just one more bus ride to go to reach Land’s End. Sophie was very excited to see it was an open-top double-decker. Naturally we had to sit on the top deck! 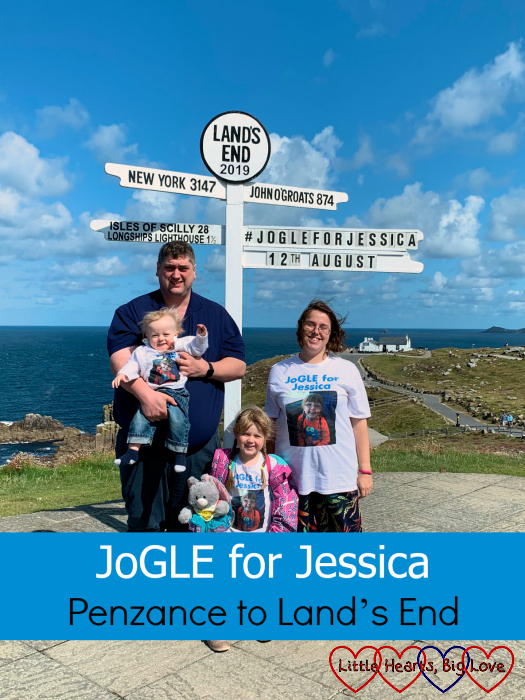 There were a couple of people sitting across from us, one of whom was clearly a local. He kept up a running commentary throughout the journey about where we were, observations on the people getting on and off and how late the bus was running. I quite enjoyed listening to it! 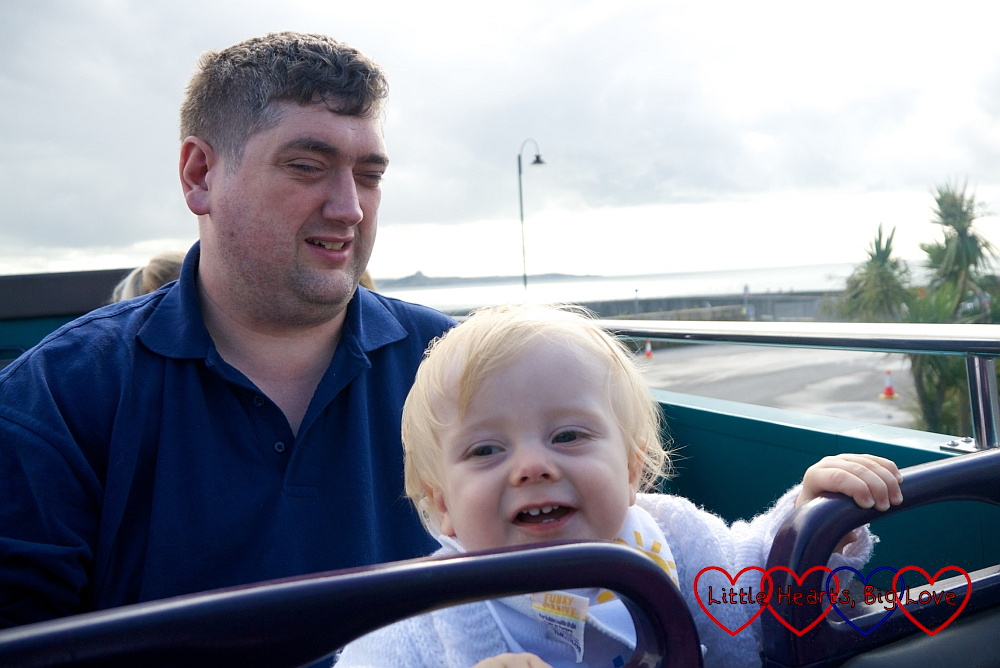 The bus journey between Penzance and Land’s End is an interesting one with lots of narrow country lanes and some fun moments of vehicles trying to pass. We had a couple of particularly tricky moments with the bus trying to pass another bus going in the other direction and then trying to pass a tractor. Can’t say I envy the bus drivers having to do this. I usually make hubby drive if I know we are travelling down single-track country lanes as they make me nervous. Watching everyone try to manoeuvre does make for an entertaining journey though when you’re not the one trying to pass! 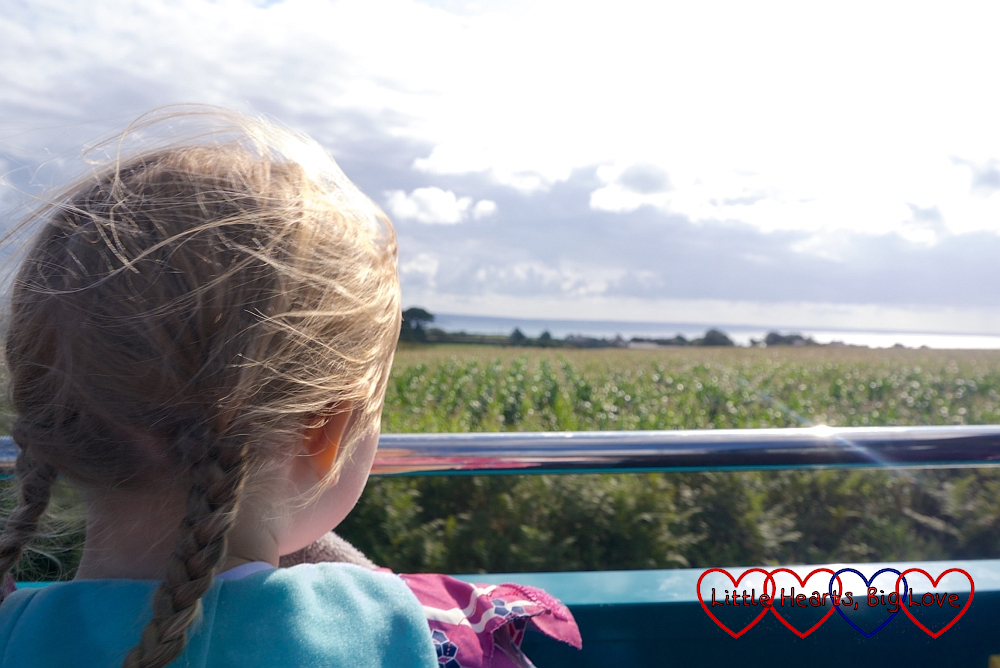 The bus emptied a bit at Porthcurno which gave Sophie a chance to sit at right the front of the bus – the best place to sit when you’re five! She loved having such a good view.

It’s a slow bus journey to Land’s End but we got there eventually. The end of the line. We’d arrived at John O’Groats on 1.35pm on Thursday. It was now 10.55am on Monday. Our JoGLE journey had taken almost four days and involved seven trains and two buses.

There’s no big fanfare when you reach the signpost – just the quiet satisfaction of achieving your goal and becoming an End-to-Ender (twice over for hubby, Sophie and myself). You have to pay to have your photo taken at the sign at Land’s End (£9.95 for a 7 x 5 photo which gets posted to you) but they will also take a photo with your phone/camera as well as the official one. 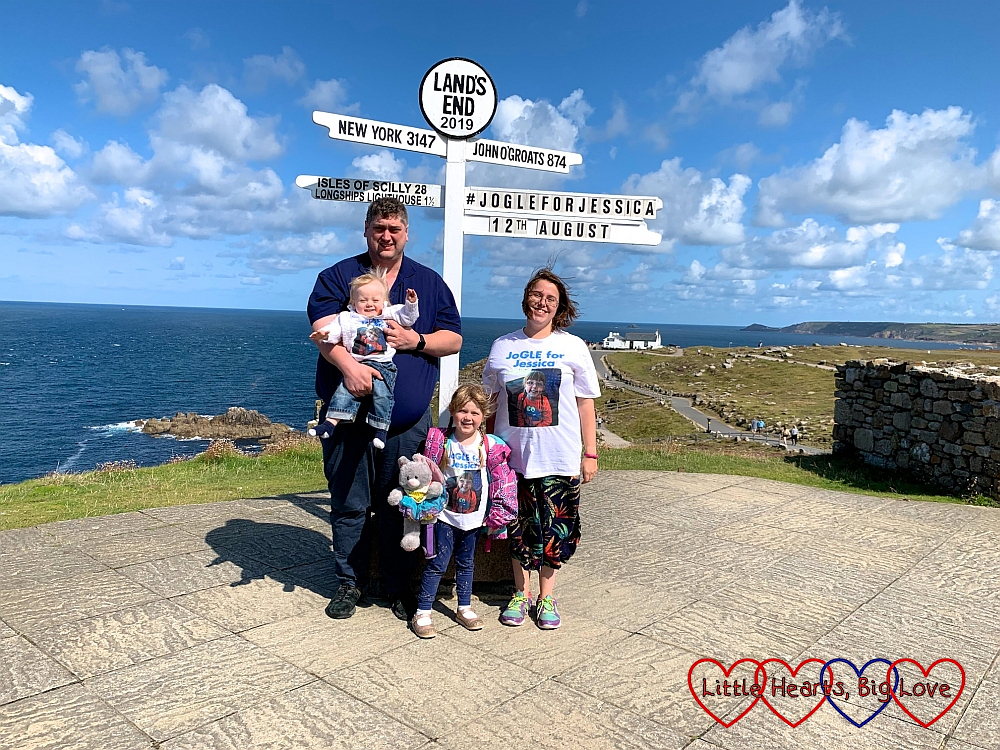 While Sophie had fun looking out to sea with the telescope, I headed for the Land’s End Hotel to get the final stamp in our log. 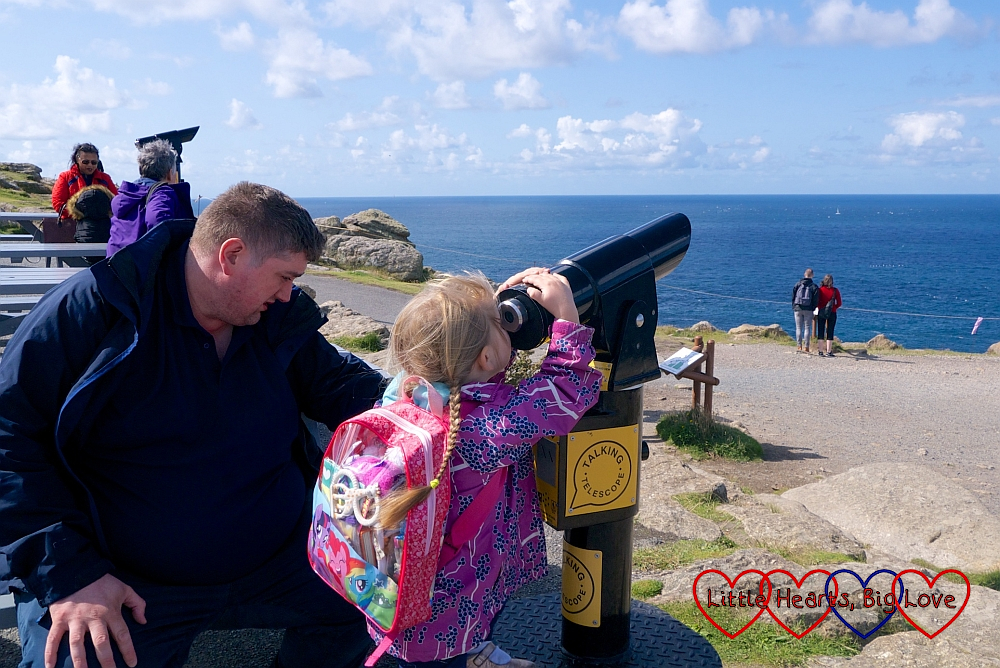 There are a few attractions at Land’s End and we could have easily spent a couple of hours here. However, we had to be on the next bus in order to make our penultimate train ready for our journey back home. We only had enough time for a photo by the End-to-Enders sign and for Sophie to have a quick look around the model village. 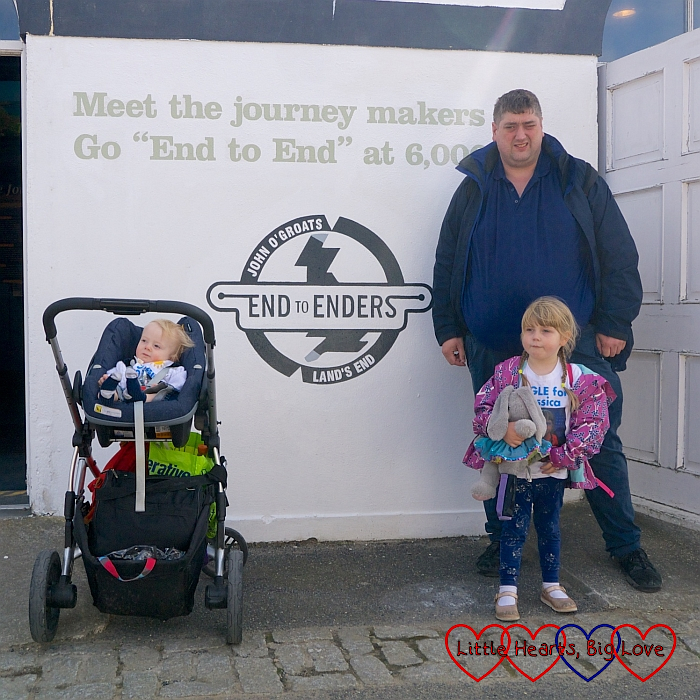 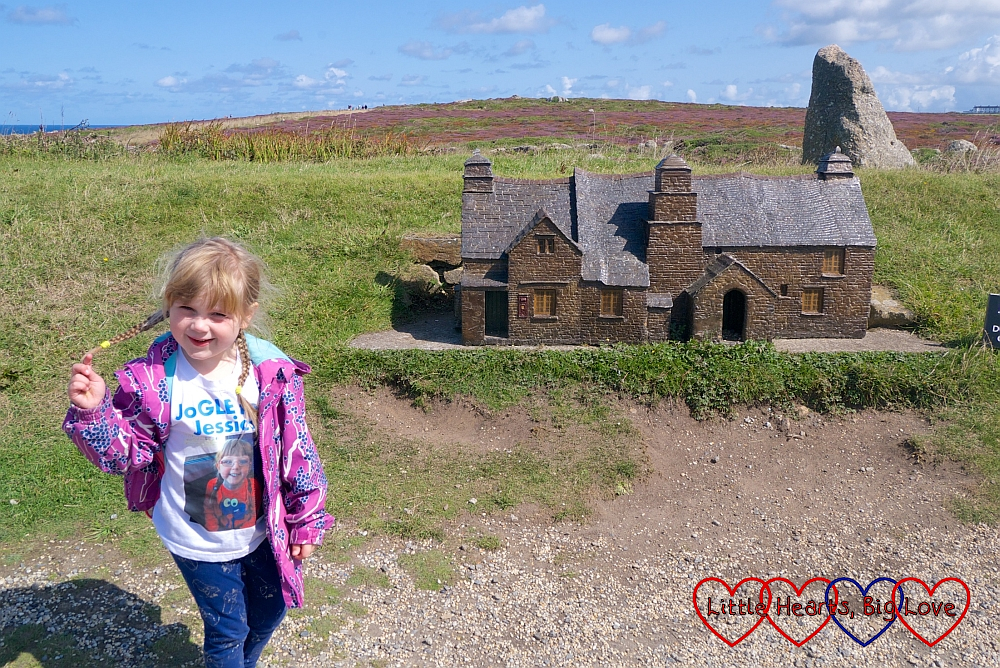 Hubby and Sophie headed back up to the top deck on the bus to enjoy the views once more while I stayed downstairs with Thomas. 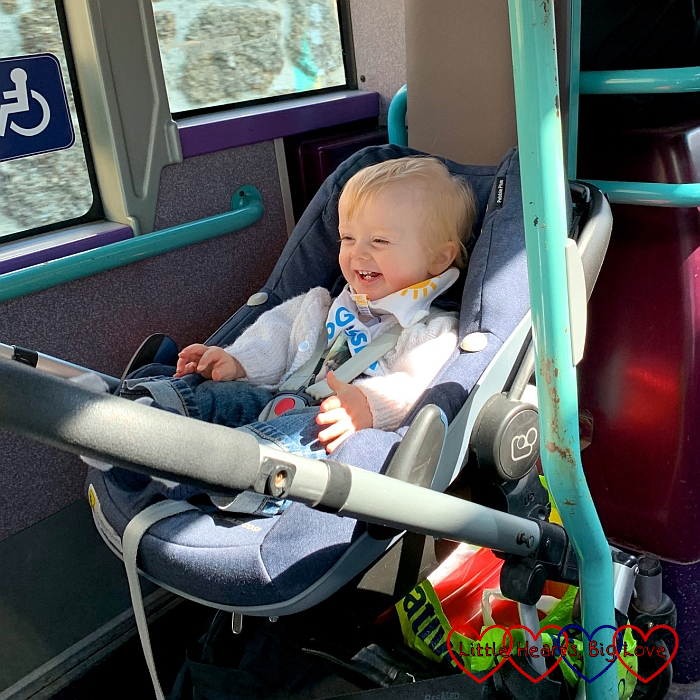 Our penultimate train journey was a long one and I had opted once more for first class. We had it all to ourselves for the first hour or so. It was quite nice. Thomas could crawl and cruise to his heart’s content without disturbing anyone. 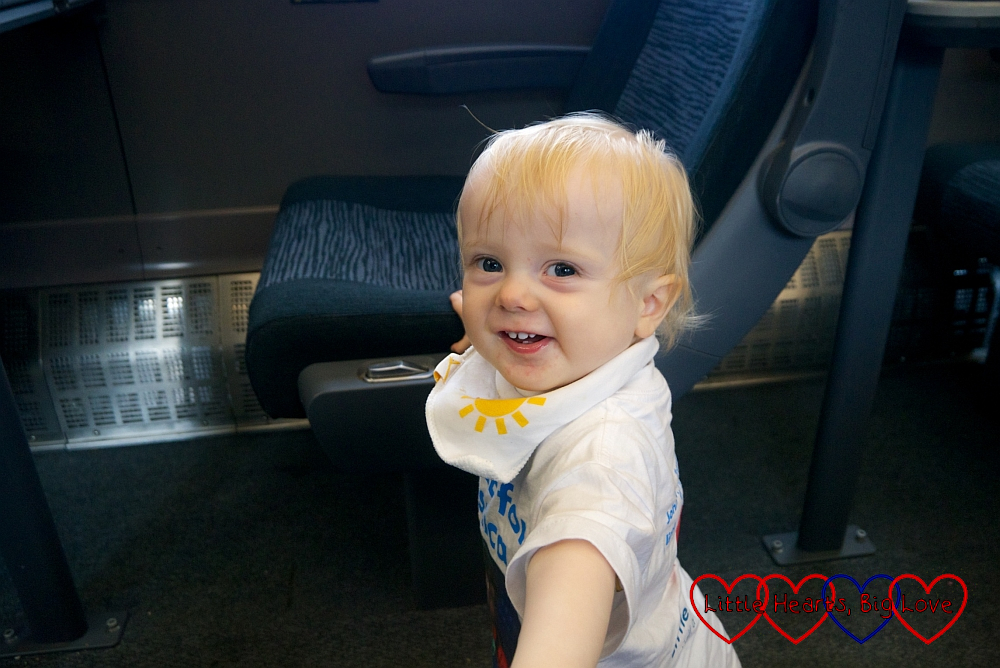 I was a bit surprised by the lack of refreshments though. We’d been in first class with a couple of different train operators by this time. I thought that maybe GWR just didn’t have such a good service. And later when there were other passengers, I just seemed to keep missing the refreshments trolley somehow. Distracted by the children each time it passed by. Eventually I managed to stop the man with the trolley on the way back and ask for a coffee.

“Well, do you have a first class ticket?”

The question was abrupt. I was a little taken aback. We were a couple of hours into the journey and this was the first time I’d been asked for it. I duly showed my ticket. The man’s tone changed noticeably.

“I’m sorry. I didn’t think you were first class passengers.”

It wasn’t the most pleasant feeling in the world to have it inferred that we didn’t seem “good enough” somehow to be sitting in that part of the train. And besides, why hadn’t we been asked earlier to show our tickets if there had been doubt over whether we had the right tickets? 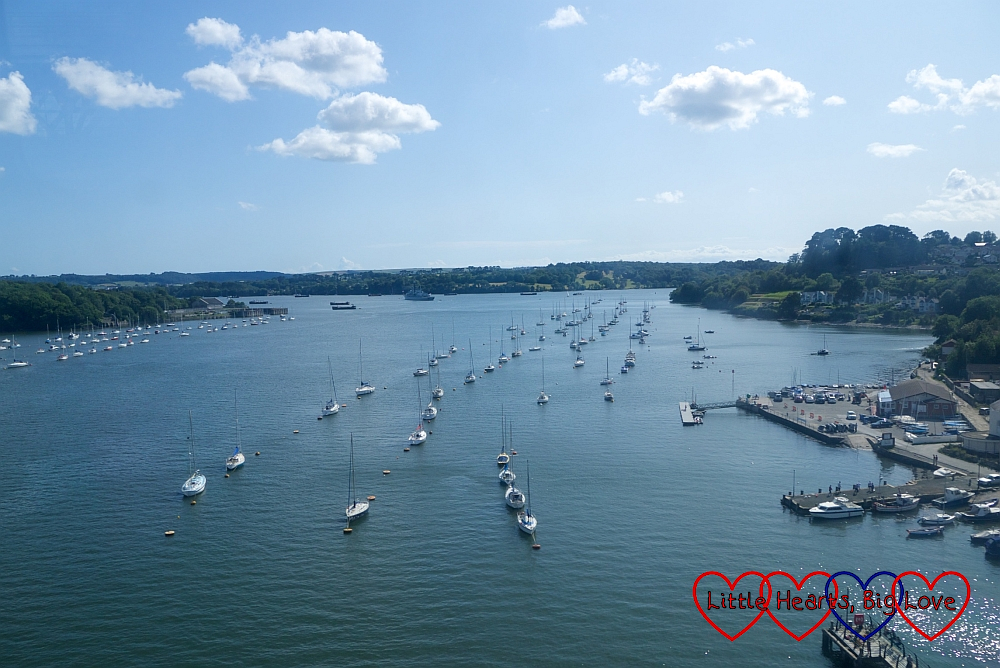 There was one lovely experience in first class though which made up for it. A lady who noticed my JoGLE for Jessica T-shirt and asked me a little more about our journey and who Jessica was. It is always lovely to be able to talk about Jessica. The next day, I saw that she had found our JustGiving page and donated. Such a kind thing to do.

We changed trains one more time – back in standard class for our final train journey home. Two tired children who had coped amazingly well with all the travelling, and two tired parents who were relieved to be home once more! We’d spent six days travelling on fifteen trains and four buses overall. It was quite an adventure. Jessica would have loved it.

A huge thank you to everyone who donated to our JustGiving page and supported us on our journey. At the time of writing, we have raised just over £1000 for Little Hearts Matter which is amazing.