On the last day of our holiday on the Isle of Wight, we met up with friends to spend a morning at Brading Roman Villa. We didn’t know it at the time, but it ended up being our last family day out with Jessica. The memories of it are extra-precious as a result. 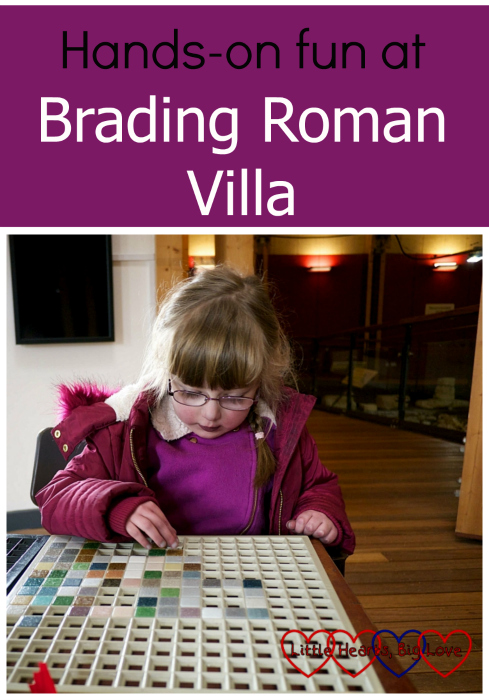 Jessica had been unwell during the holiday and had struggled with low energy levels during the week. She seemed to pick up though as the week went on. On this last day, she was well enough on for us to feel able to leave her buggy in the car and gently encourage her to walk around instead. Overall, she coped quite well with this. 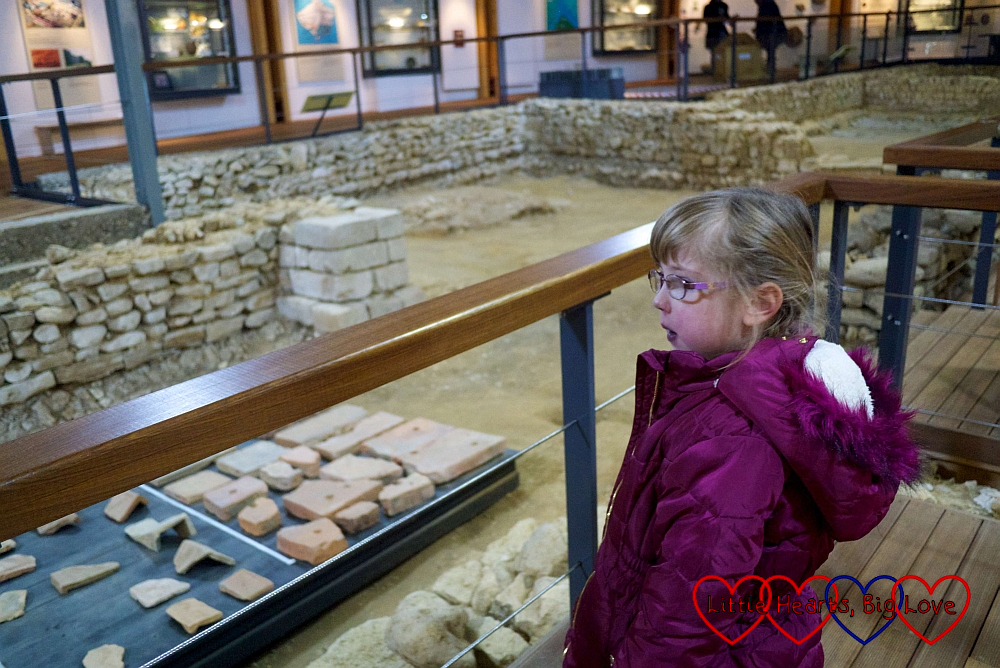 Brading Roman Villa is thought to originally date from the 1st century AD. The original villa was redeveloped over the years and used for various purposes until it collapsed some time around the 5th century AD. The excavated remains of the villa are now undercover in the museum building. The layout of the rooms can be clearly seen, along with remnants of mosaics on the floors. There is also a small model showing the layout of the villa. 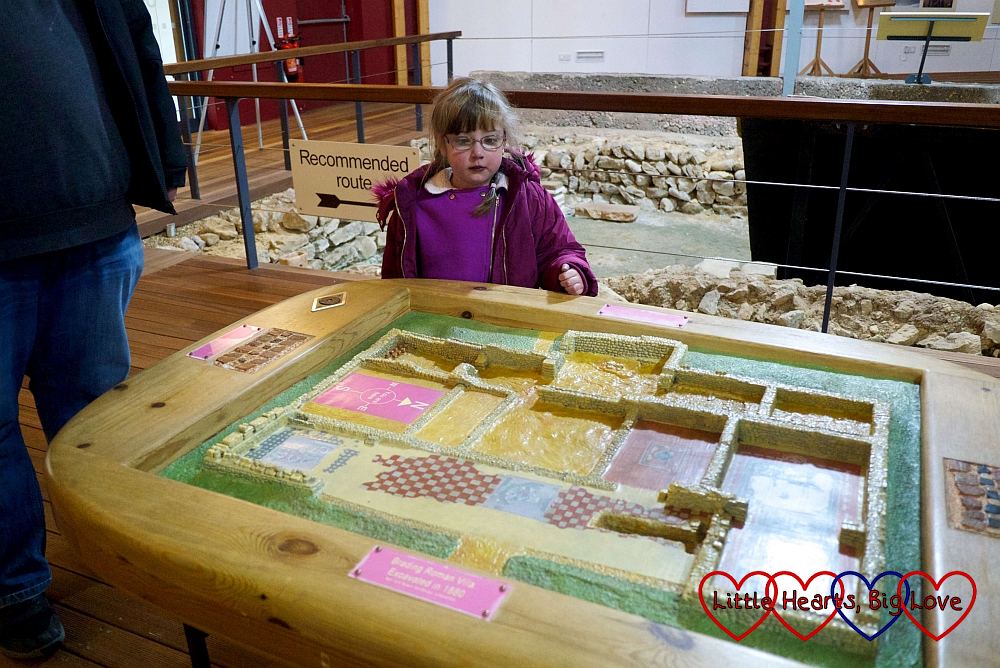 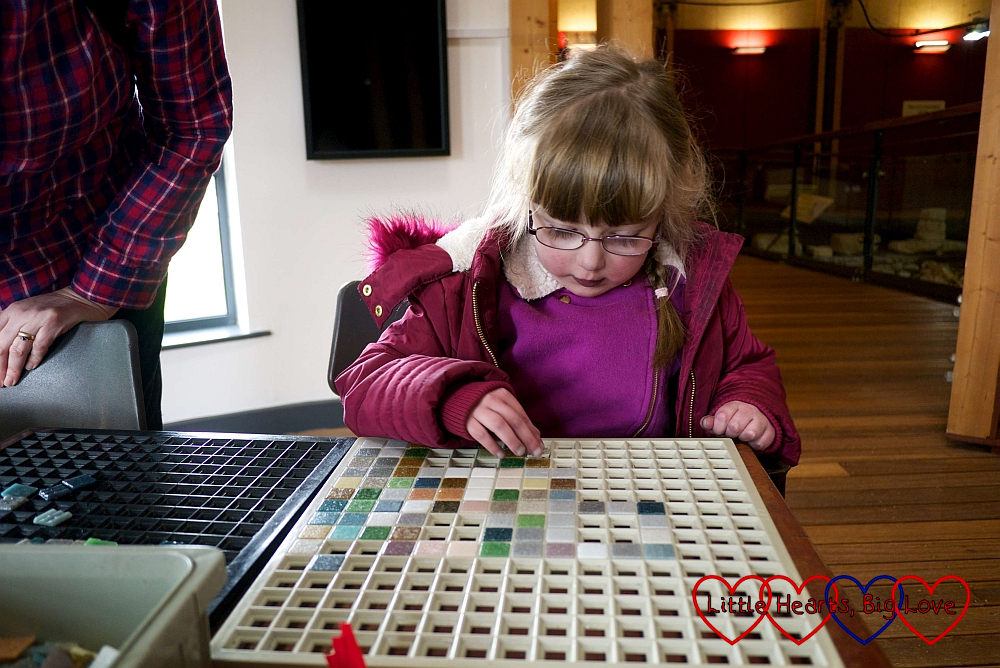 Making the mosaic tiles kept them occupied for some time. Sophie focused on just filling her whole frame with small tiles whereas Jessica used hers to make a mosaic picture of a house. 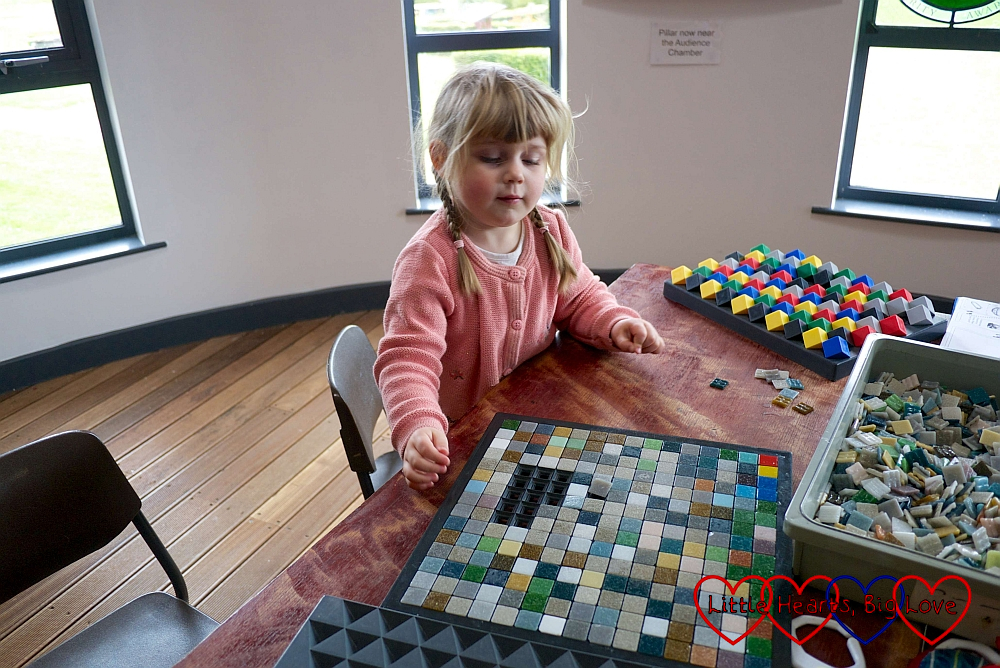 After the girls had finished making their mosaic tiles, they had fun matching up the segments on the giant cylinder. These made up pictures of characters found around the villa, including the cockerel headed man which features on many of the mosaics. 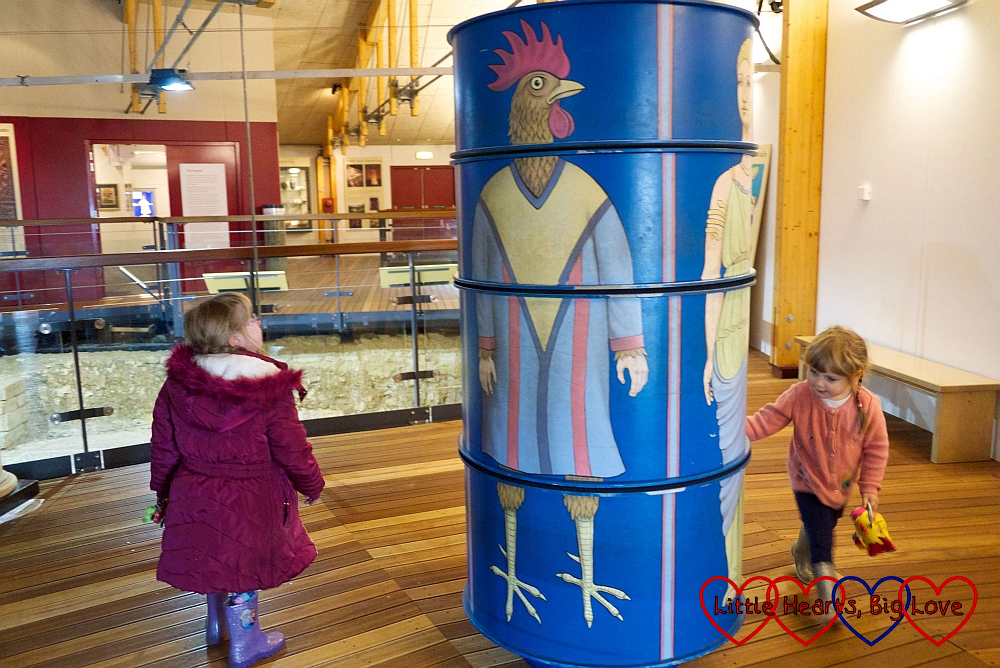 There was also a dressing up area where the girls could wear a toga or dress as a Roman soldier. Jessica wasn’t quite so keen on dressing up, but Sophie enjoyed it! 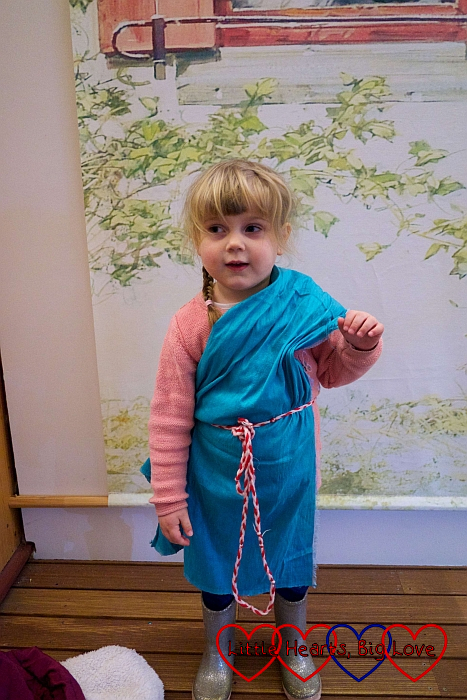 Our friend Cathy then helped the girls with putting together a tube with sections showing all the different layers found when excavating the villa. Jessica and Sophie both enjoyed doing this. They were quite good at managing to work out which layer came next. 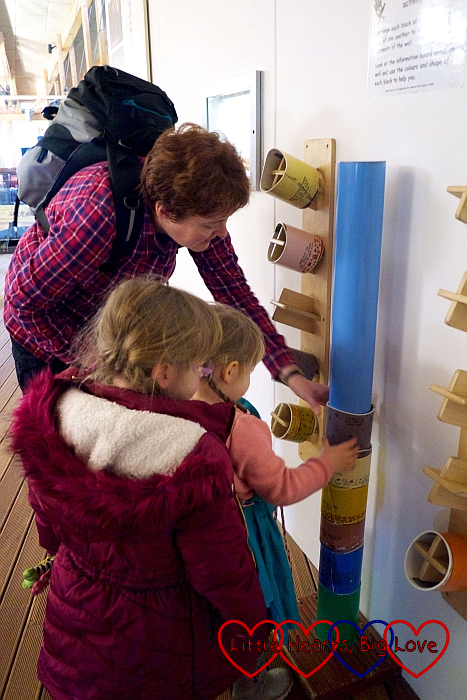 We had been given a question sheet with things for the girls to look out for around the villa. We missed a few of the answers along the way though in spite of Cathy’s help. The girls soon lost interest in this. It was something that they probably would have enjoyed more had they been a little older though. 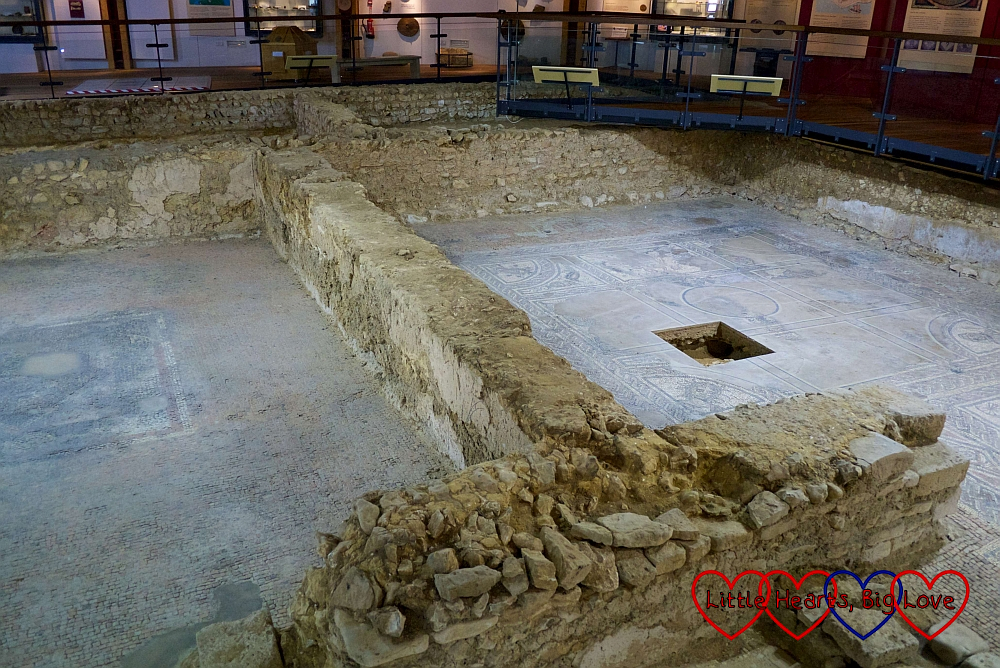 Jessica did enjoy doing some crayon rubbing to make her own picture of a Roman coin. She only needed a little help from me to hold the paper with doing this. 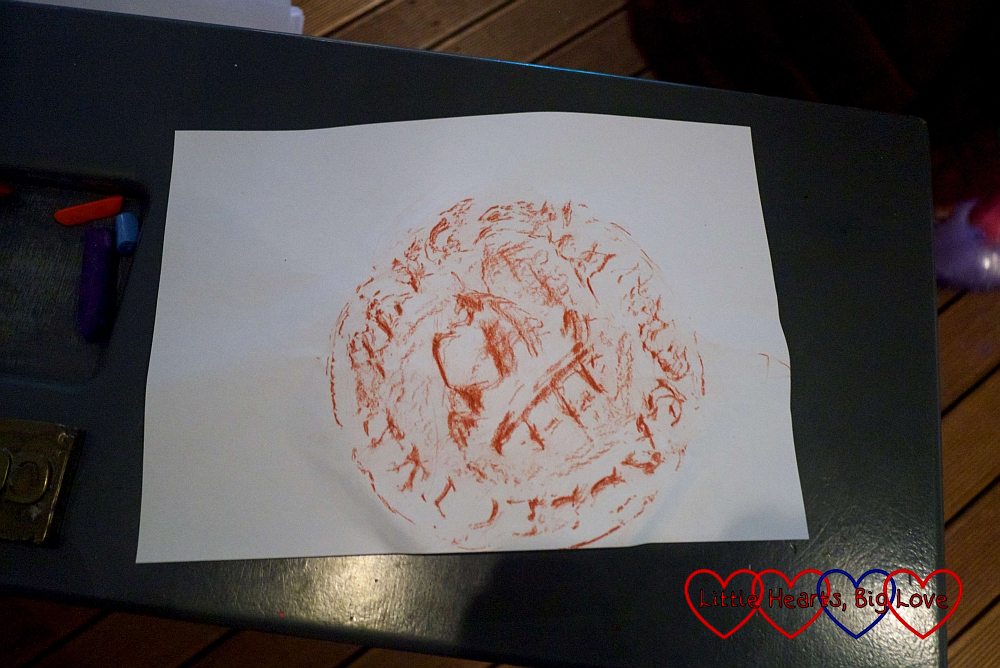 Sophie was in her element later on when we came across a jigsaw puzzle of one of the mosaics. Jessica was happy to stand and direct as Sophie put the puzzle together. It was surprisingly tricky as there were quite a few similar segments. In the end, it was the colour gradient changes across the mosaic that helped give clues to where the pieces went. 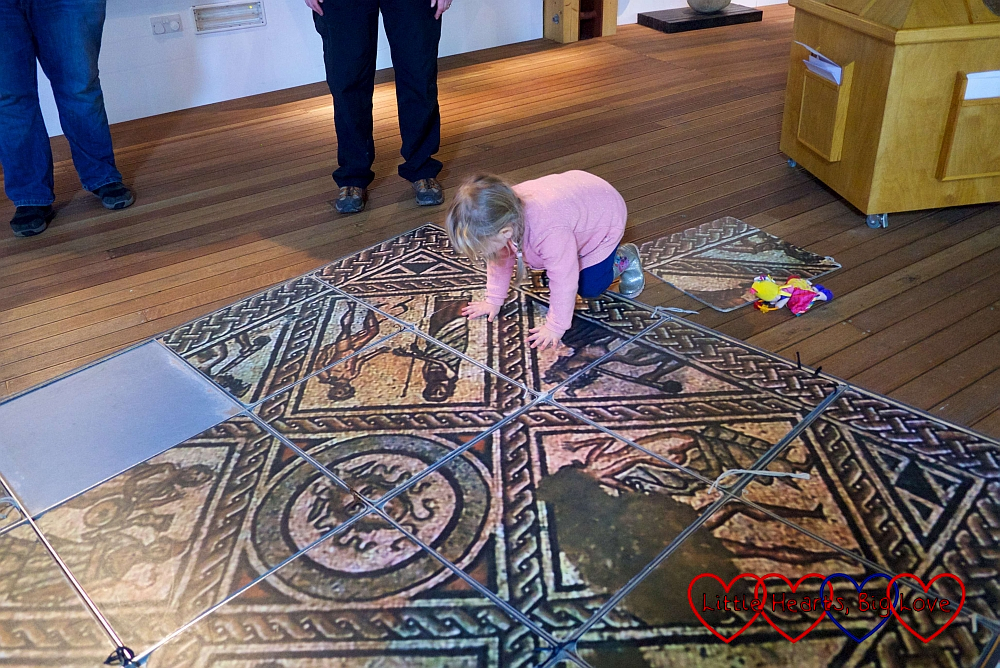 The room housing the villa was on the chilly side. By the time we finished the jigsaw, Jessica was starting to get cold. Cathy took her out to the warmer part of the museum so Sophie and I could look around for a little longer.  After a few minutes though, we headed back out to the craft tables near the café. Both the girls were quite happy to sit here and get creative. Sophie was happy cutting and spreading glue on the paper while Jessica quietly created her own picture. As Jessica was quite tired by this stage, we decided not to explore the reconstructed Roman garden outside. 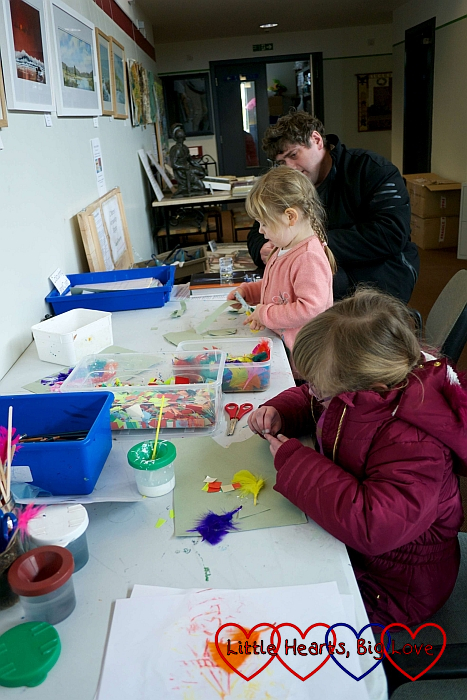 It was a lovely morning and we enjoyed spending time with our friends there too. We were so encouraged that Jessica seemed much better than she had been at the start of our holiday. It seems impossible that just a week later, she was gone. We had so many wonderful days out together as a family. It makes me so sad that we have now come to the end of sharing those days out that Jessica was a part of. I am so thankful to have recorded and captured so many of those memories through this blog though. I know that it will help keep those memories alive for us and Sophie to look back on in the future.