Denham Country Park is one of our favourite places to visit. During school holidays, they often run various activity sessions and trails for children. We’ve previously enjoyed river dipping and nature walks and were looking forward to trying out a couple of other sessions and taking part in the Halloween trail during half-term. 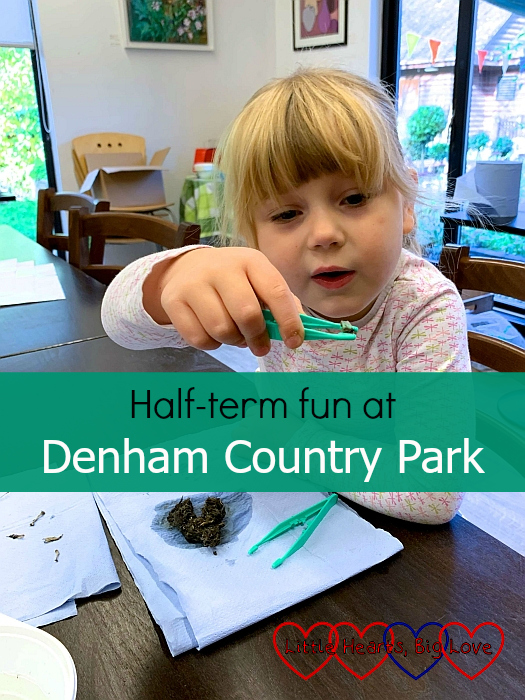 We arrived a little early for the first session which gave us time for a few games of Pooh sticks first. It was lovely to watch Sophie and Nanny playing this together. Sophie won most of the games (I think she tended to throw her stick slightly early each time!) but on one round, the sticks appeared on the other side of the bridge tangled up together.

“Look, Nanny,” said Sophie in delight, “our sticks are hugging!”

Isn’t it lovely to think of the sticks having a hug? 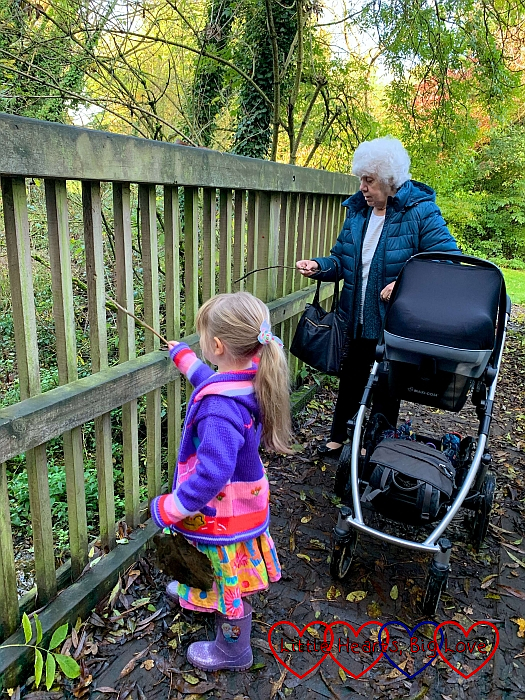 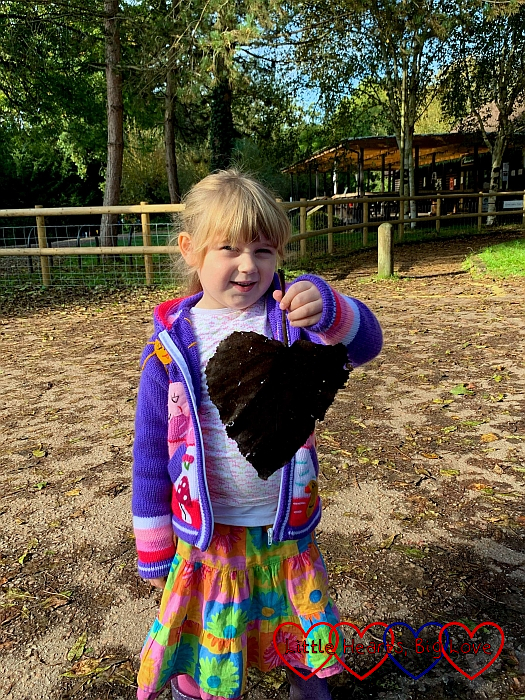 The first session – “what do owls eat?” – was one I was particularly looking forward to. I thought Sophie would find it interesting too. It was aimed at children aged six or over. Sophie’s sixth birthday was the day before the session. That said, I think she would still have managed to do this session and enjoyed it earlier in the year too.

We were given a barn owl pellet to dissect, using plastic tweezers. There were some information sheets to help us identify what we might find inside the owl pellet. I knew that owl pellets contained the undigested parts of what owls eat, but I didn’t realise that they were actually regurgitated by owls and not owl poo. You learn something new everyday! 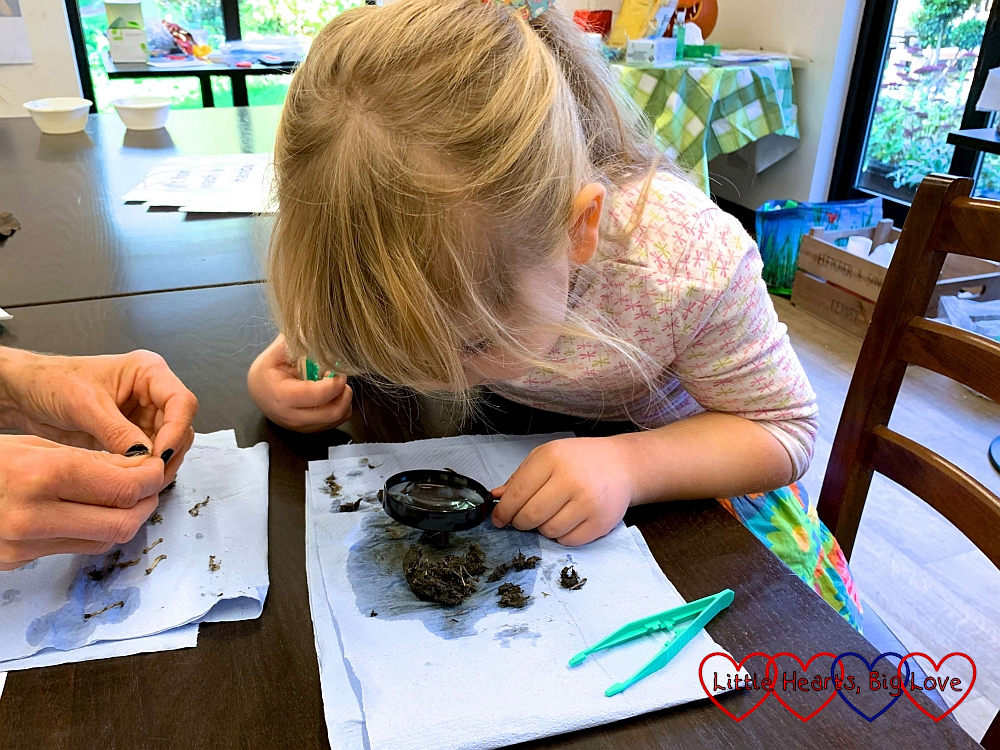 It was fascinating to gently pull apart the owl pellet and see all the tiny bones and pieces of fur inside.

Mini dinosaur bones. Which we managed to identify as being from a couple of voles. We managed to piece together the bones on one of the information sheets, learning about which part of the vole’s body they came from. There were skull bones, jaw bones, ribs, spine bones, thigh bones with tiny ball joints at the top and teeny tiny bones from the feet and claws. Amazing. 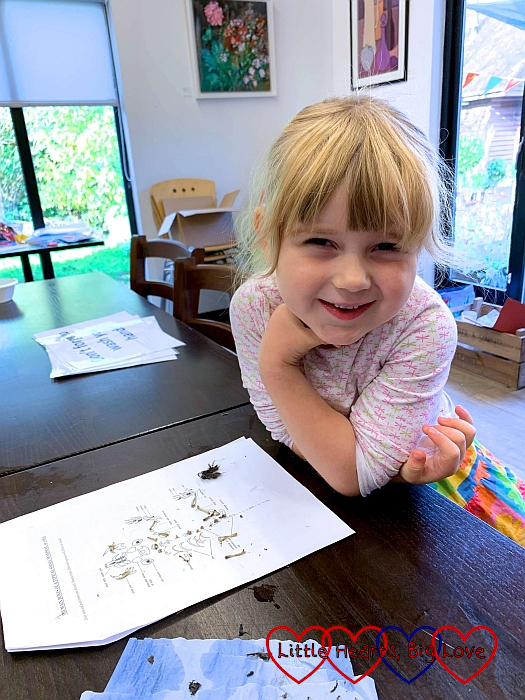 After we’d found most of the bones inside the owl pellet, and washed our hands, we finished off the session with an owl-themed craft activity. Sophie enjoyed making a picture of an owl on a tree branch, using a muffin case for the owl. 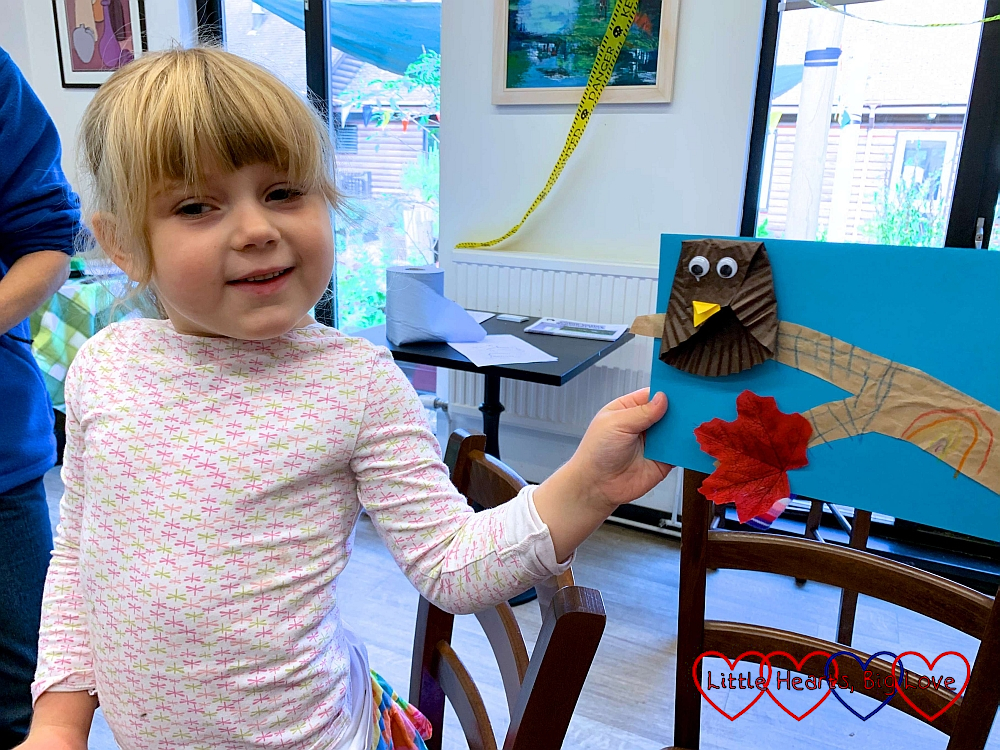 We had just enough time for a quick trip to the playground before we had to leave to take Nanny home. Sophie particularly enjoyed showing me how she could play “Do-Re-Mi” on the musical chimes. They didn’t quite fit the right notes, but it was near enough. We’ve not yet tired of all the songs from The Sound of Music, even after four months of rehearsals and a week of performing! 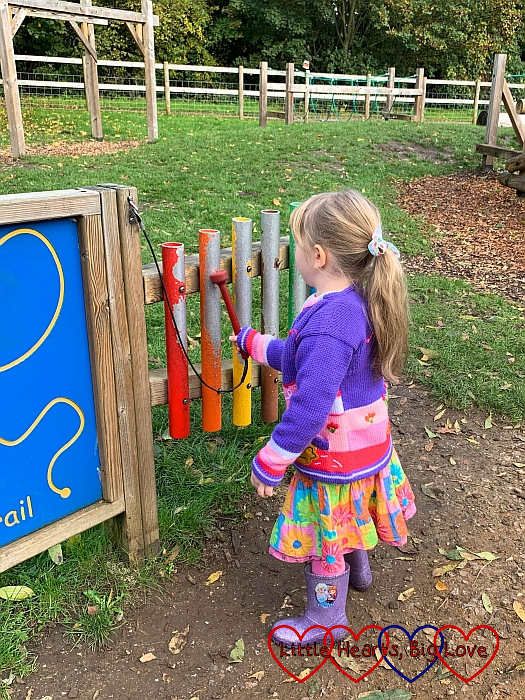 We were back again the next morning for the spring bulb planting session. Sophie was given a bowl and we headed into the herb garden to collect some leaves to decorate a card. Choosing the different leaves was a good opportunity to learn the names of some of the different plants in the herb garden. I was quite impressed that she recognised lavender particularly as we don’t have any in our garden. Her favourite was lamb’s-ear with its soft velvety leaves. 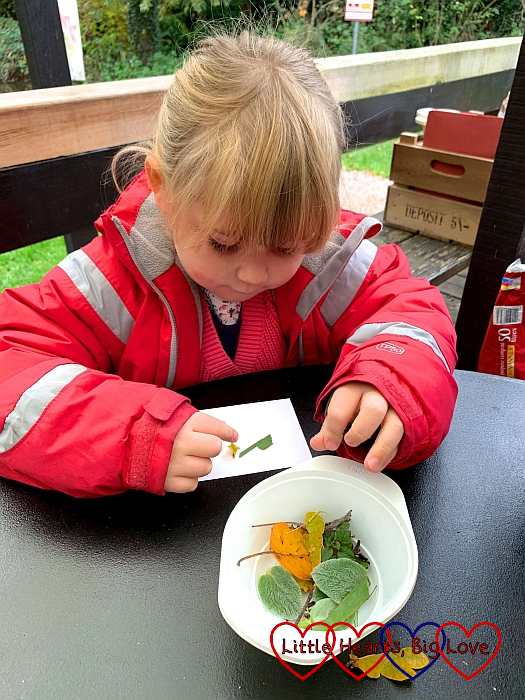 Once we’d decorated our cards, we were ready to decorate our pots with Halloween stickers. Sophie decided to do a “banner” of pumpkins around the top of her pot and then used lots of different stickers to cover the rest of the pot.

We planted three bulbs in each pot. It will be a while before they grow but in the meantime, we’ve got our leaf pictures to stand inside the pot. 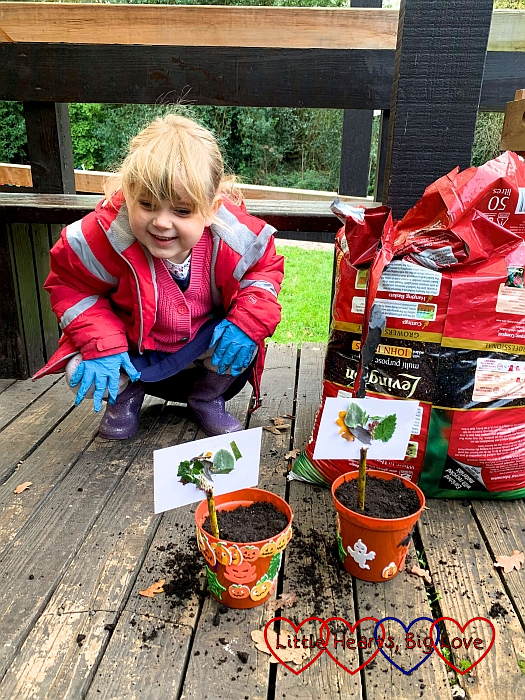 After we’d finished planting our spring bulbs, we headed out on the Halloween trail to see how many pumpkins we could spot along the way. There were also letters to find and rearrange to make a word. 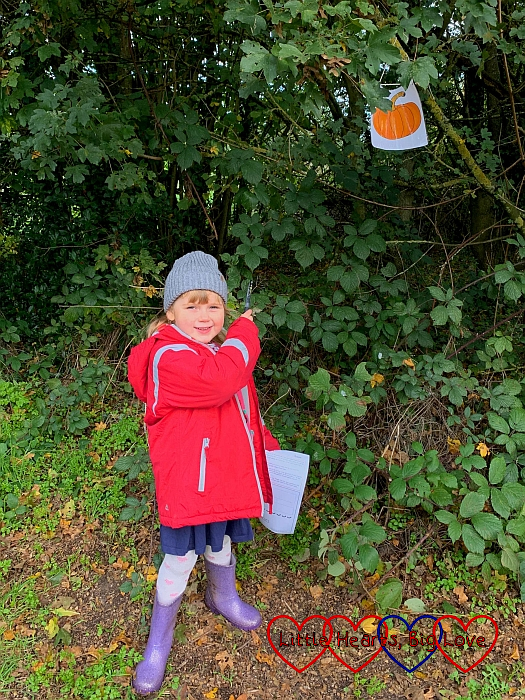 Thomas had a lovely sleep in the buggy while we did the Halloween trail. We managed to find nine pumpkins. I think we missed at least one though as we went a long time at one point between finding letters or pumpkins. We missed one letter too but the word was easy enough to work out. Sophie enjoyed the chocolate eyeball she was given for finishing the trail. 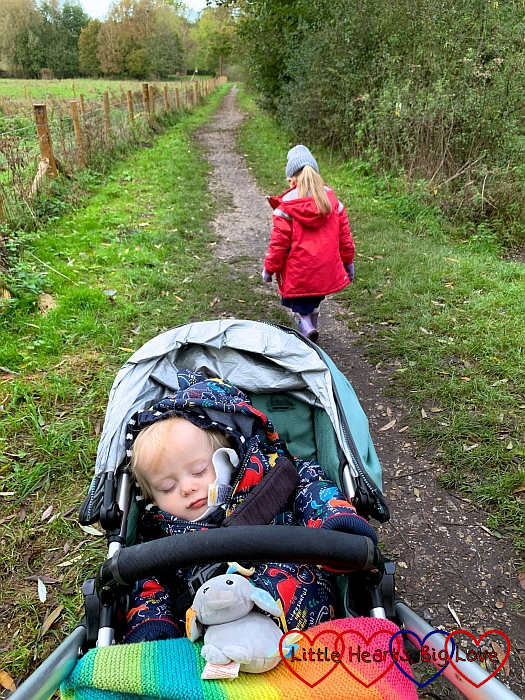 We really enjoyed taking part in the activity sessions and the Halloween trail. It was a shame though that the activity sessions were so quiet. We were the only people signed up both times. They cost £4 each which is good value for a half-term activity and I was surprised that no-one else had signed up. Maybe it was due to the nearby areas having different half-term weeks. Apparently the week before was busier. There were a few other people doing the free Halloween trail though. Hopefully if there are other sessions running next time we’re on school holiday, they’ll be better attended.

Visiting Denham Country Park – what you need to know:

There is a pay and display car park. Opening times vary throughout the year. For more information click here.