It’s been a long time since I last went ice-skating. The last time I went was shortly after hubby and I got engaged. His proposal had been somewhat spontaneous and spur-of-the moment so it was a few weeks after our engagement that I was given my engagement ring. It was the run-up to Christmas, and we were at an outdoor rink with some friends. Hubby thought it would be romantic to surprise me with the ring by going down on one knee on the ice to present it to me.

Unfortunately, hubby’s ice-skating skills are not all that good. Predictably, he ended up falling on his bottom and was helped up by a couple of ice marshals. I had no idea what he had been trying to do – I just thought he’d slipped over. It was a lovely surprise a few minutes later when I suddenly spotted him standing at the side of the rink holding the ring out as I skated towards him. Happy memories. 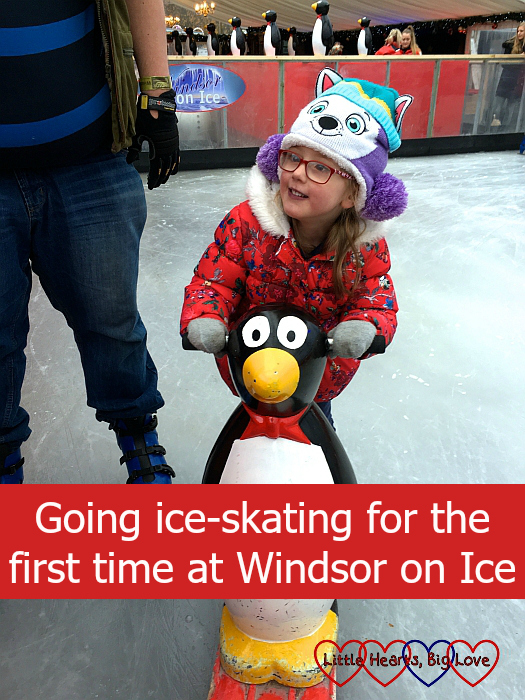 Fast-forward nine years and we were taking our girls ice-skating for the very first time at Windsor on Ice. The rink had opened early this year, on 18 November. We were due to go back into hospital for Jessica’s surgery the following Monday and I thought it would be a fun thing to do on for our last pre-hospital weekend (although as it turned out, Jessica’s surgery ended up being cancelled again). 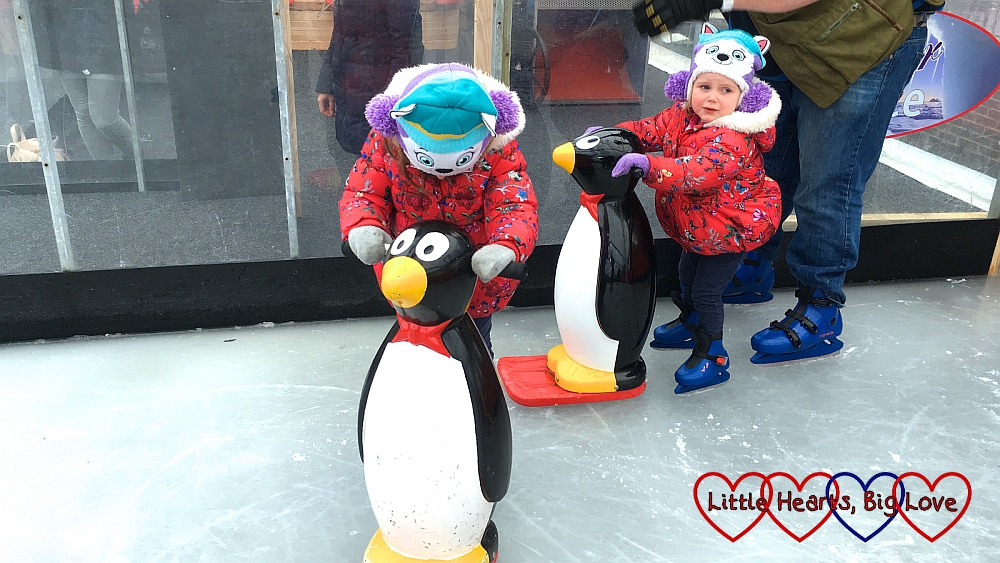 The girls were very excited about the prospect of going ice skating. “I’m very good at ice skating!” Jessica told me in the car. I did try to warn her that ice skating in reality was somewhat harder than it looked. I don’t think she believed me. She soon realised that I’d been right once she got on the ice though! 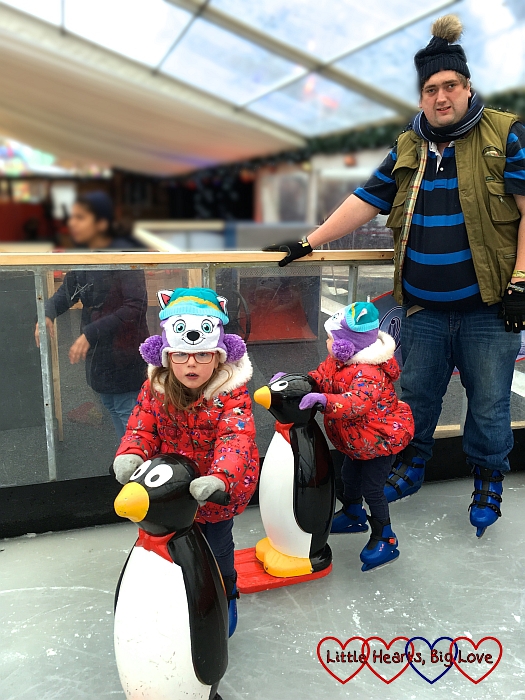 We rented a penguin skate aid each for the girls to help them stay upright. I don’t think they would have coped very well at all without these. It took them a while to understand that trying to walk on the ice was not the best plan. What worked best in the end was trying to get them to keep their feet still while hubby and I pushed them around the ice. 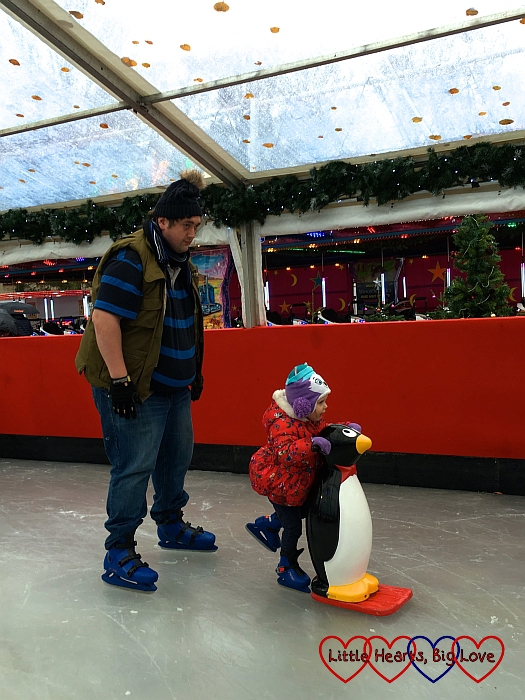 We only managed a few trips around the rink before the girls decided that they’d had enough. They were happy to watch for a few moments though while hubby and I took it in turns to skate by ourselves. 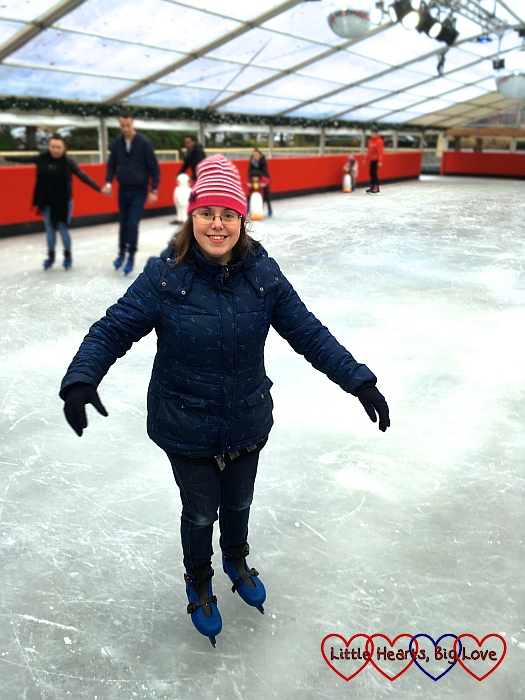 Afterwards, we stopped for some bratwurst and coffee before heading out to the funfair. The girls were keen to go on a few rides despite the cold and rain. The rides cost between 2 and 4 tokens per person, and the tokens were £1 each. There were wristbands available for £15 which allowed unlimited rides during certain time periods. We were coming up to the end of the time period for the wristband and so decided to just limit the girls to ten tokens each. This allowed them to go on four different rides together. 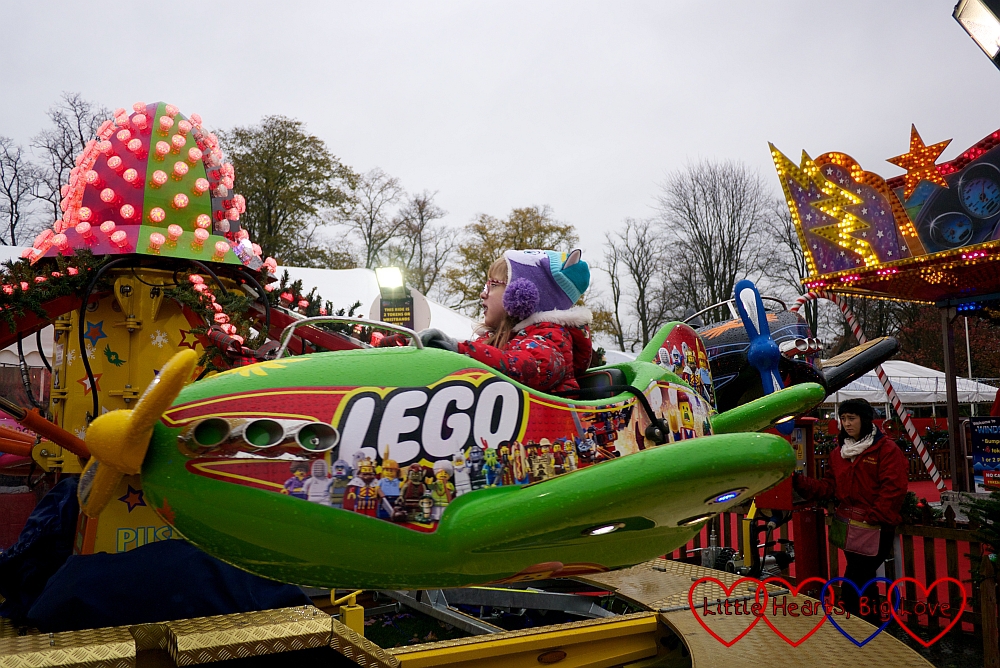 We did need to get a couple of extra tokens for the flying elephant ride as Sophie was too small to ride without an adult. We were the only people on the ride though and the lady running it kept it going quite a long time for us. It was quite nice to get a little more time on the ride. Jessica was beginning to worry that the lady was never going to let us down by the time the ride started to end though! 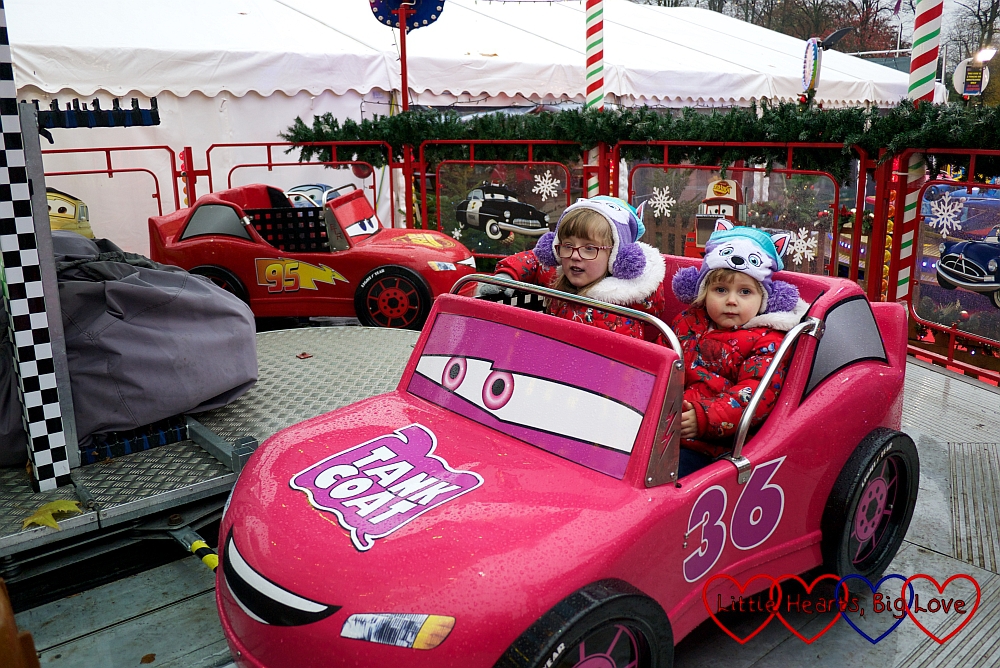 The ice-skating might have been a bit shorter-lived than we’d hoped and the weather wasn’t the best, but it was lovely just to have a fun afternoon together as a family. It was also lovely to reminisce with hubby over that wonderful memory of the last time we’d been ice skating together.

Visiting Windsor on Ice – what you need to know:

The ice rink is at Alexandra Gardens. There is a pay and display/pay by mobile car park nearby.