I’ve been flying solo this week as hubby has been away working on an event all week. On the whole, it’s not been too bad though apart from having one night with Jessica being sick all over my bed which of course coincided with Sophie waking up and crying for Mummy – that was quite a fun juggling act all round! Thankfully it seemed to be just a one-off and Jessica is back to her usual happy self now – fingers crossed it was an isolated moment and that no-one else comes down with a sick bug. 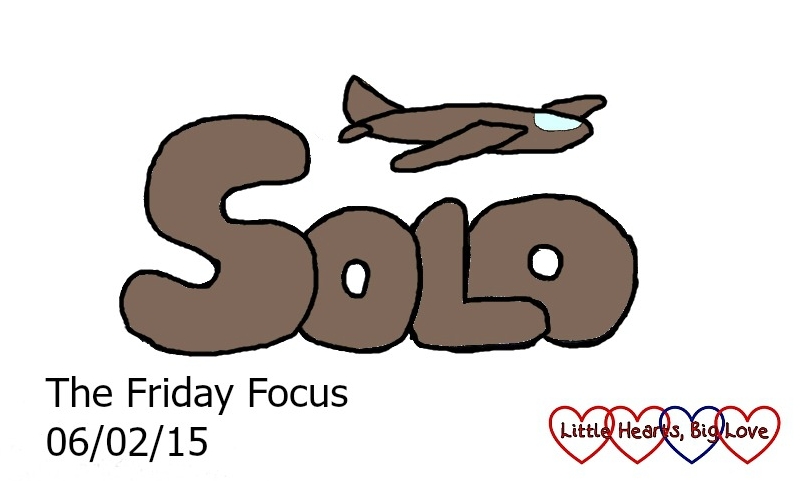 We’ve been out and about quite a lot over the last week. Hubby and I took the girls to see our local panto last weekend and both of them enjoyed their first panto very much (hubby and I less so admittedly as the performance wasn’t particularly good but at least the girls seemed to like it!) 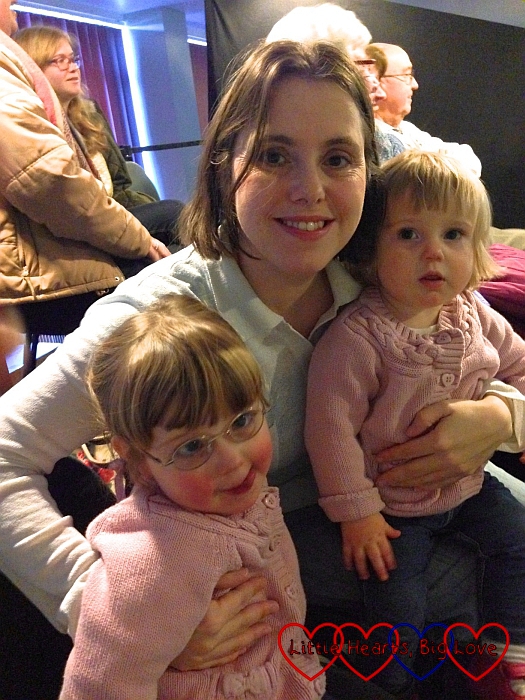 We had another hospital trip as Jessica had her eye check-up – she struggled a bit with identifying some of the pictures but it was hard to tell whether it was just due to her being quite distracted and so we have another check-up booked for three months’ time.

We were very excited to finally get some snow on Tuesday (or more accurately, Mummy was very excited – much more so than the girls!) It was lovely to see the girls playing out in the garden in it before we headed off to toddler group. I had a somewhat frustrating moment though as I had put my jar of Love Hearts in my bag to take to toddler group as a fundraiser for Tiny Tickers and accidentally dropped my bag as I was leaving the house resulting in a bag full of broken glass and Love Hearts. Thankfully Heart Week hasn’t yet started so there’s still time to do another jar for next week’s toddler group! 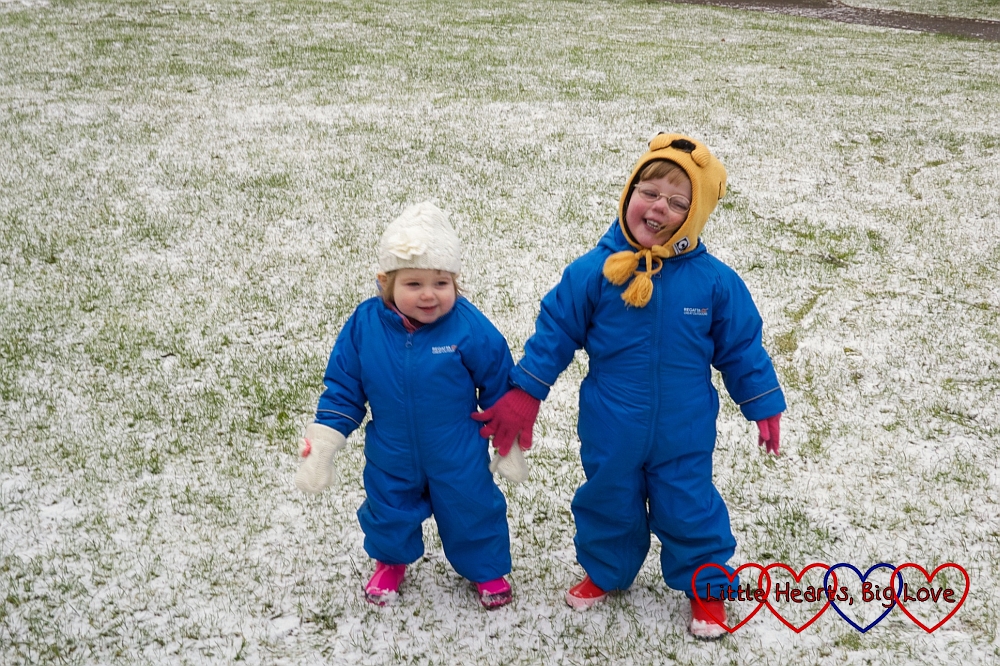 Fun at home:
We’ve enjoyed snuggles on the sofa whilst watching CBeebies, having picnics on the floor with the toys and Jessica has been doing lots of Mister Maker-inspired ‘making’. We’ve made frog masks out of paper plates, pictures of buses and a car steering wheel picture using a paper plate. I’ve noticed that this is an area that Jessica has become much more focused on since starting preschool and it is lovely to encourage her creativity. 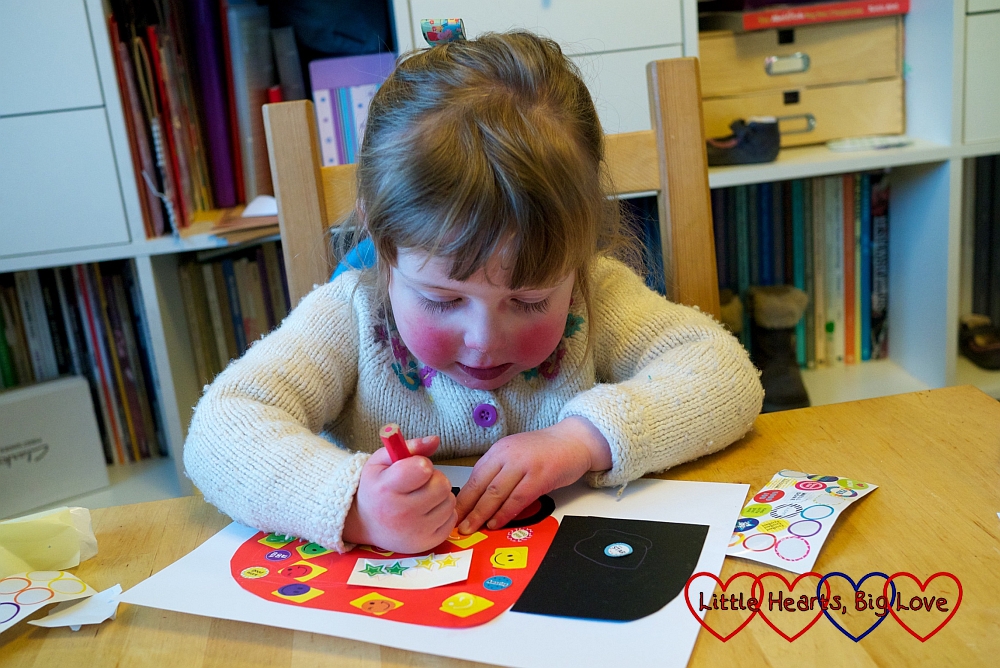 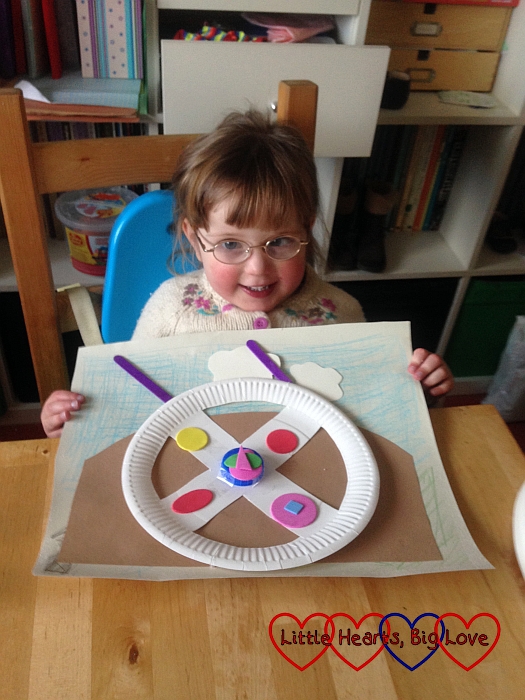 Time for me:
Hubby and I went out for a meal at a local carvery with some of the other church elders last Friday night while Grandma babysat. I also managed to have a little bit of time at our church craft group this week to do a bit of rag-rugging while the girls played with toys on the floor. We have a 100 years exhibition coming up and I’ve been asked to demonstrate rag rug techniques as part of that. It’s been over four years since I last did any rug making but thankfully it all came back fairly quickly! 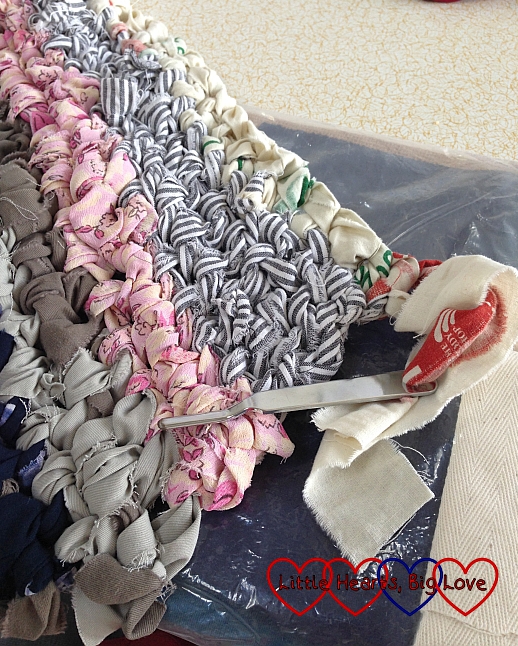 As February is National Heart Month, I’ve been focusing on posts to help raise awareness of congenital heart defects, sharing facts and figures and some stories from other heart families. I’m really pleased that a few other heart parent bloggers have been willing to share their stories and am looking forward to featuring their guest posts over the coming weeks. Next week is CHD Awareness Week and I’ll be posting each day about various aspects of CHD alongside some of my other usual parenting posts.

Clear away the clutter in the spare room in readiness for my sister and nieces hopefully coming to stay in half-term.