We can never resist a sculpture trail and when we started spotting a couple of the Oor Wullie’s Big Bucket Trail sculptures on our #JoGLEforJessica journey, we knew that we had found our activity for our day off in Glasgow. 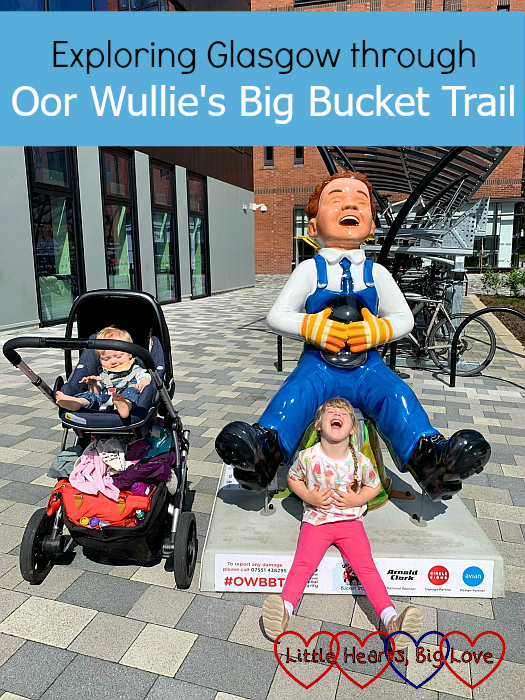 Oor Wullie’s Big Bucket Trail is a Scotland-wide trail to raise funds for children in hospital. There are 200 Oor Wullie sculptures to find – 60 in Edinburgh, 58 in Glasgow, 36 in Dundee, 36 in Aberdeen and 10 in Inverness – plus 308 Wee Oor Wullies. That’s a lot of sculptures and a big area if you are planning on trying to find them all! Hubby spotted the first one – ‘Time to Shine’ – at Edinburgh Waverley station as we were rushing to get our connection. We spotted two more Oor Wullies in Inverness – ‘Well Here We Are’ inside the station and ‘Nessie Wullie’ outside. 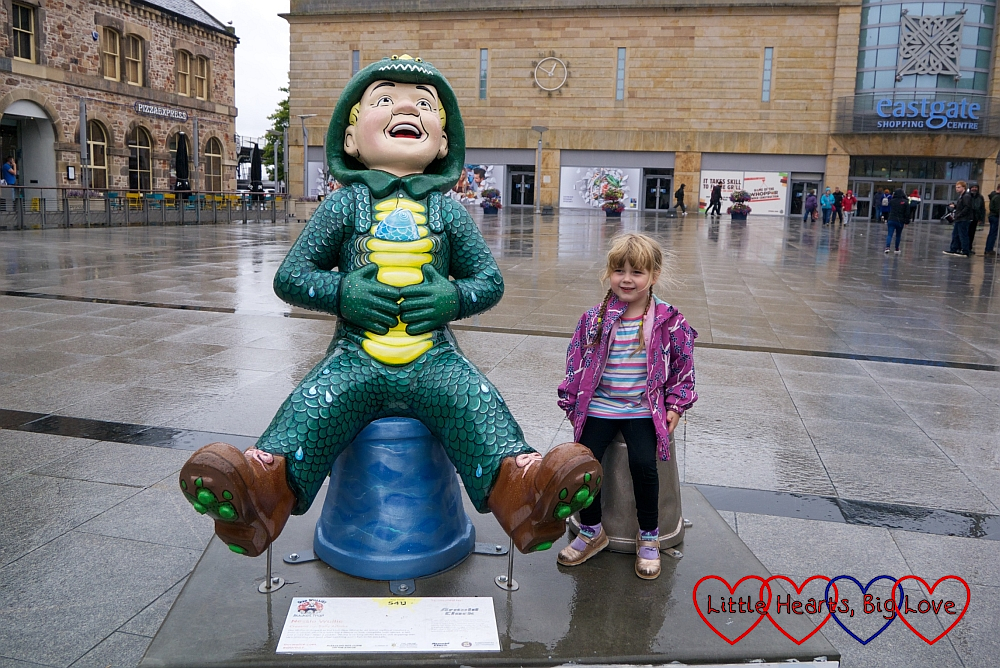 In Glasgow, we downloaded the Oor Wullie’s Big Bucket Trail app, entered the codes from our three previously spotted Oor Wullies and began our Oor Wullie hunt in earnest. There were quite a lot of Oor Wullies and Wee Oor Wullies within reasonable walking distance and hubby had soon worked out a route to try and take in as many as possible. 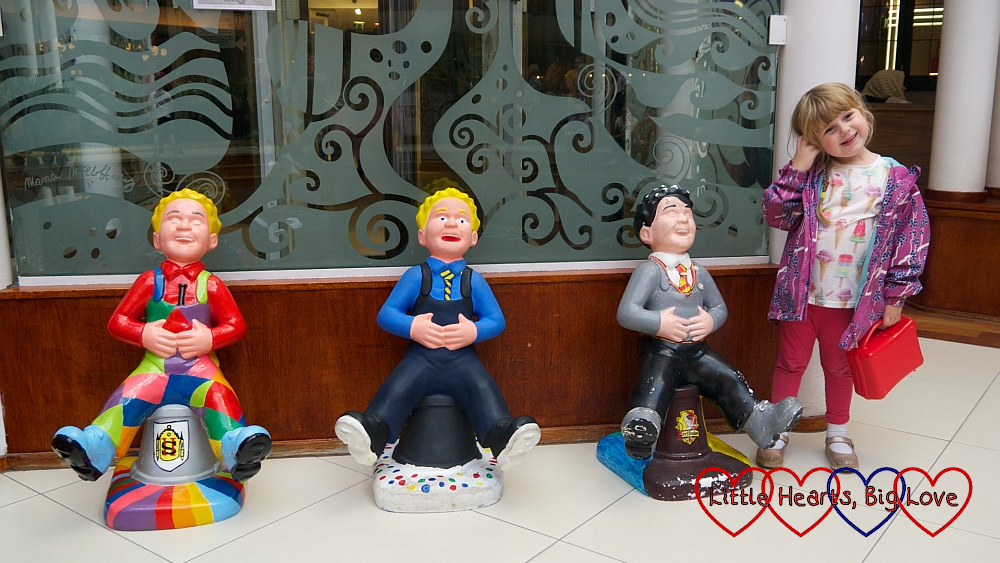 The trail app was similar to the ones we used for the Shaun in the City and Gromit Unleashed 2 trails. You could look up Oor Wullies by trail and filter by whether you’d collected them or not plus there were rewards to pick up along the way too. It wasn’t as well designed as the Aardman trail apps though. I couldn’t centre the map on our location (even with location services on) and found it frustrating that the map tended to zoom back out whenever I exited the app. We ended up flicking between the map on the app and Google maps to try and work out where we were at various points on the route. 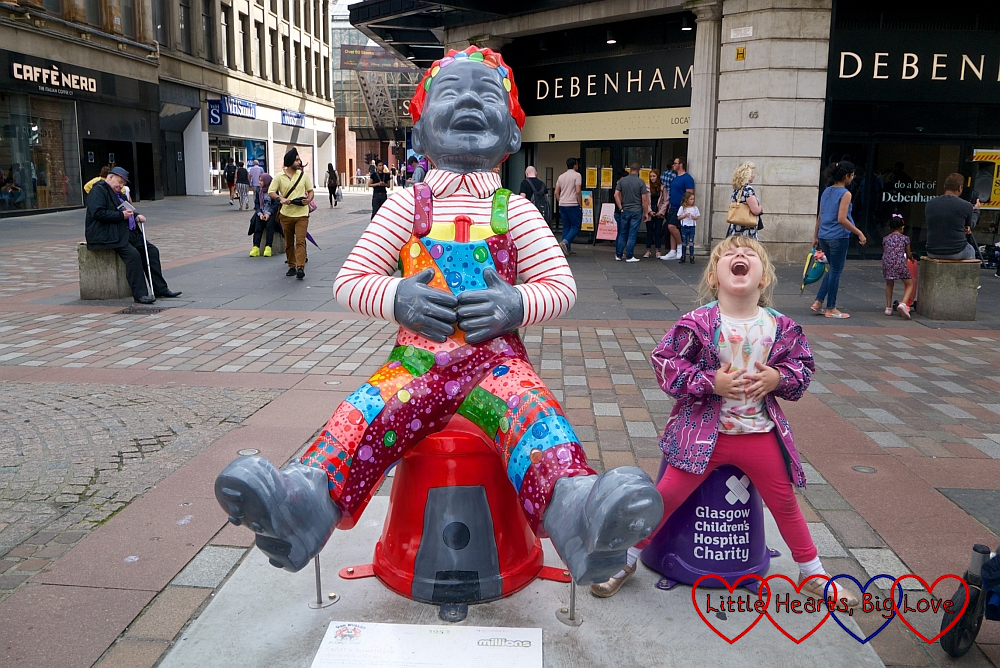 The rewards were unlocked automatically at various points but unless we looked at the rewards page, we had no idea whether we’d collected one or not. As some of them included discount codes, it would have been useful to have had notifications about them. 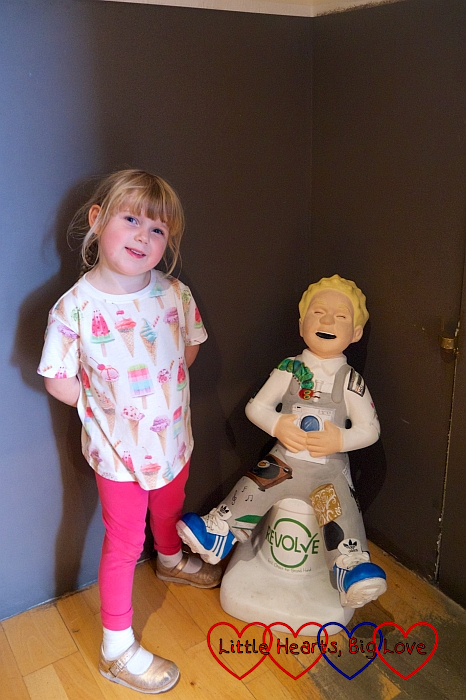 Minor app irritations aside, we enjoyed our hunt for the Oor Wullies. I love the way that trails like this take you around parts of a city that you’d probably not explore as a tourist. They also make a walk a lot more fun for a child – according to my FitBit we walked 11km on our travels around the city and other than a couple of grumbles at the very start, Sophie walked the whole distance without complaint. 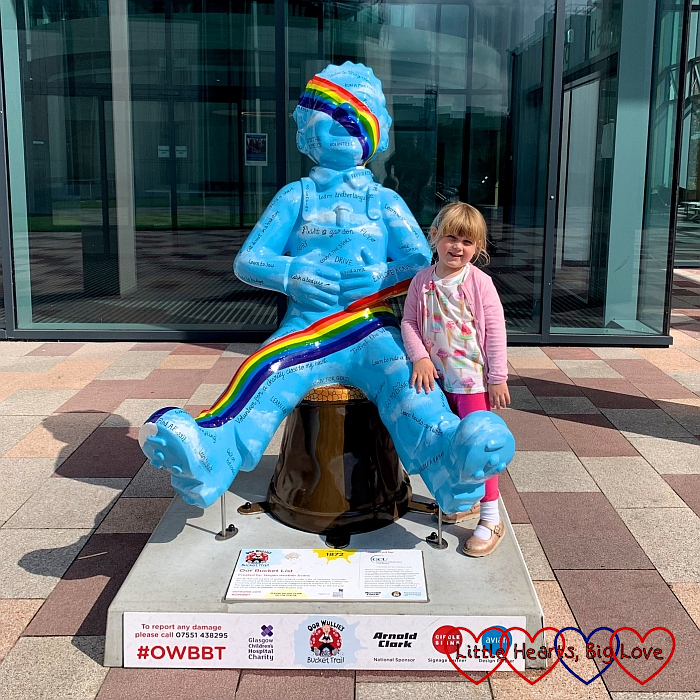 We started off at the Glasgow Caledonian University Campus on Cowcaddens Road where we found our first Glaswegian Oor Wullie – Oor Bucket List. Our first Wee Oor Wullie – Life and Earth – was next at Buchanan St bus station. This one was on its own unlike the other Wee Oor Wullies we found later on, which were in groups. The app code covers the whole group so you ended up ticking several Wee Oor Wullies off the list in one go! 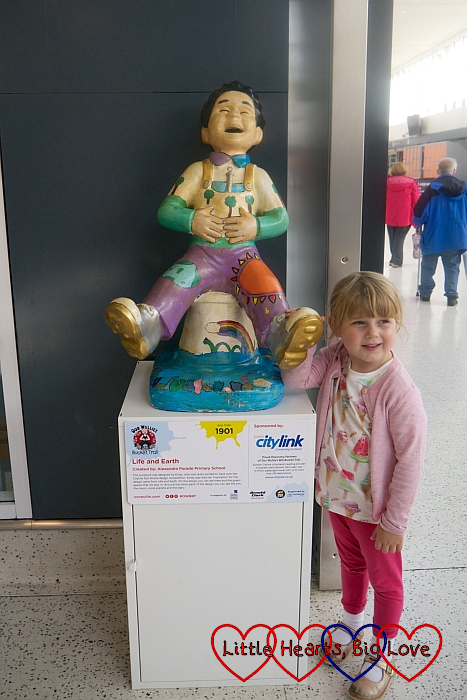 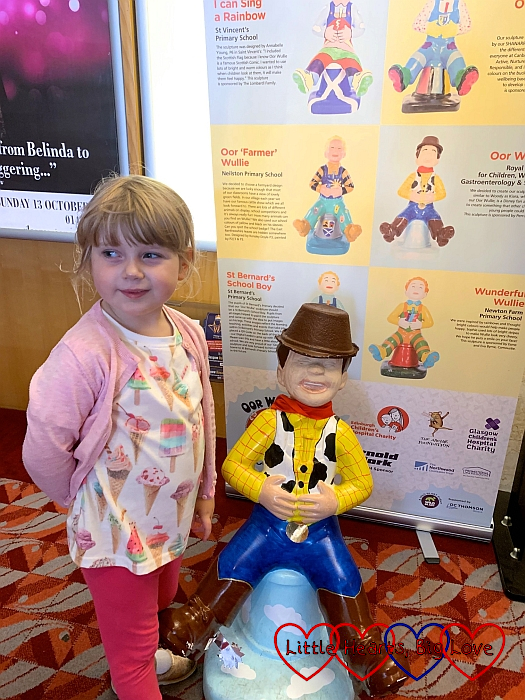 Our route then took us along Cathedral Street to the University of Strathclyde where we ticked off a couple more Oor Wullies before heading south towards Trongate and Glasgow Green. Along the way, we spotted lots of Painted Lady butterflies on buddleia bushes which made us think of the butterflies we released last year in memory of Jessica. We also spotted a hockey player sculpture from the 2014 Commonwealth Games. 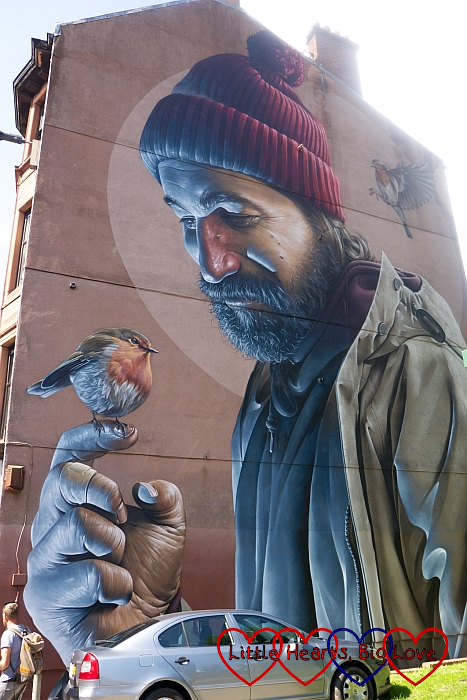 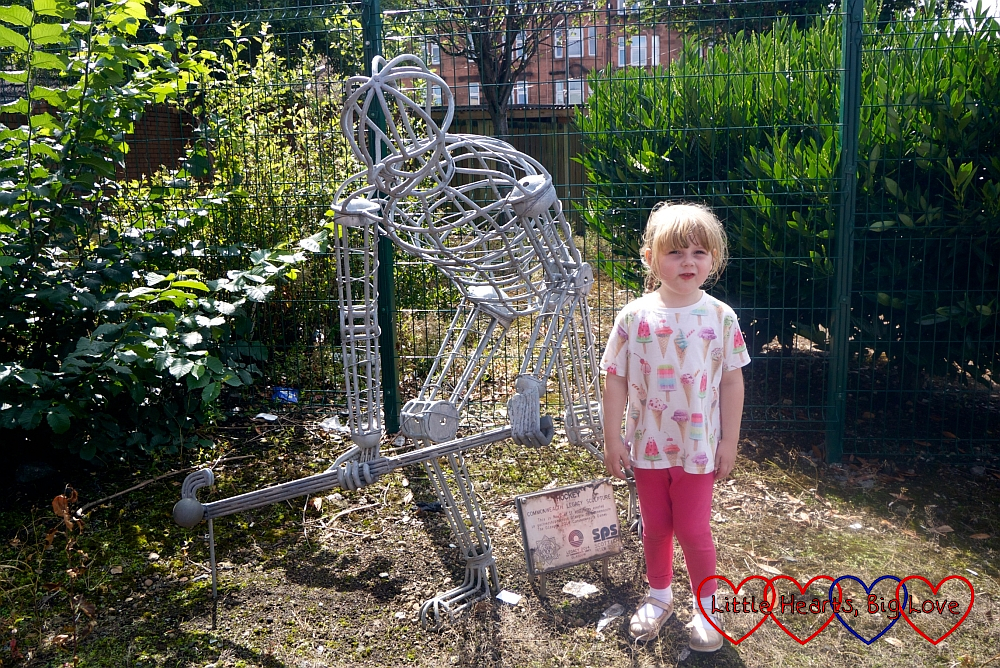 Glasgow Green was a lovely green space to explore and somewhere we could have happily spent a couple of hours or more. We took a break from our hunt at the playground which had the biggest slides I’ve ever seen in a playground. Sophie had a wonderful time climbing up all the pyramid structures and sliding down the slides while Thomas had a nap in his buggy. 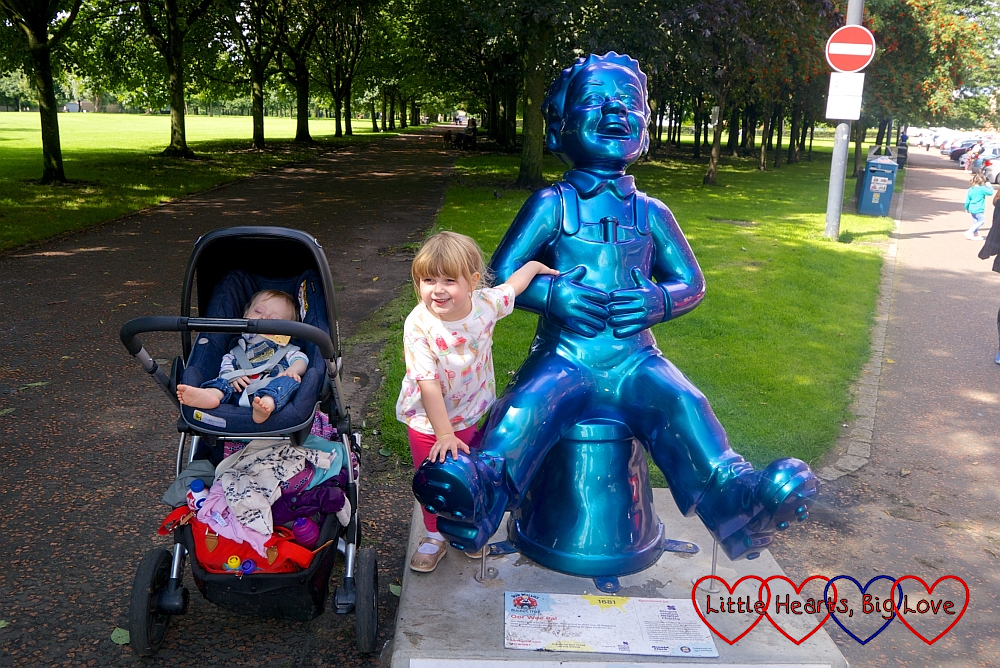 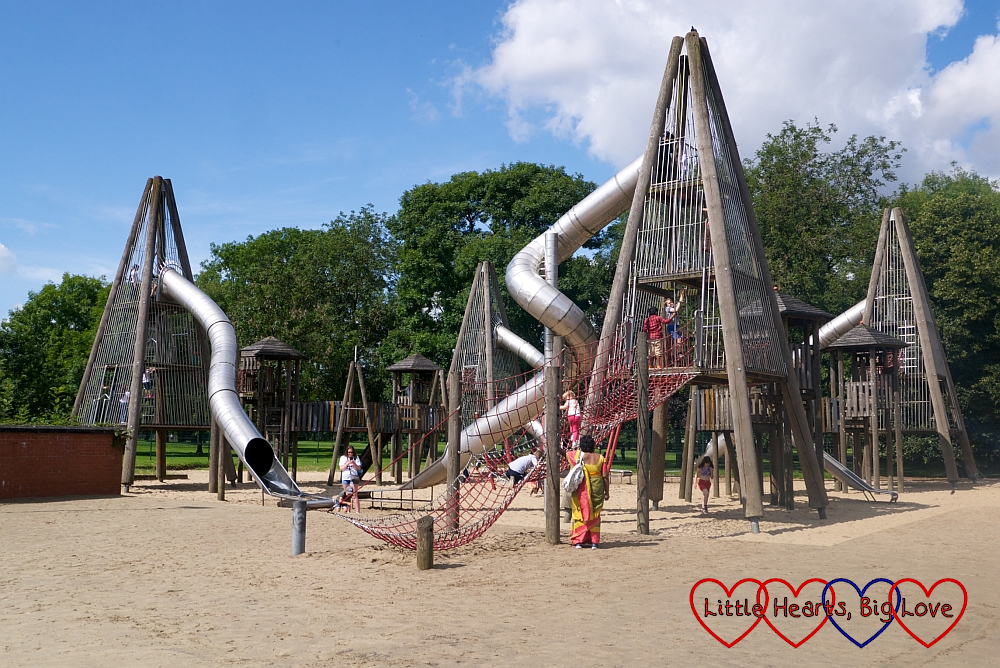 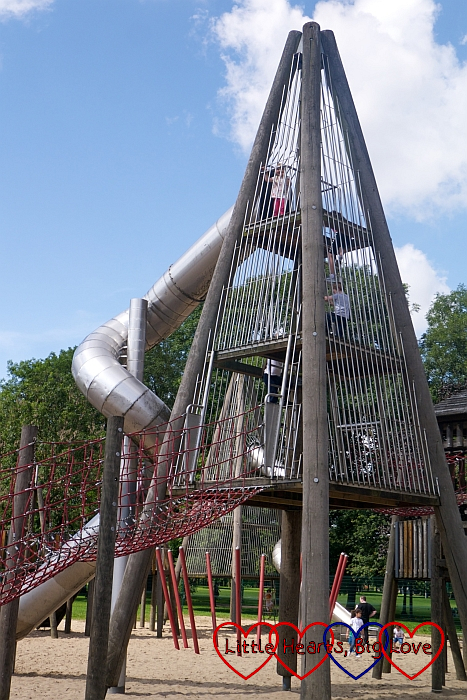 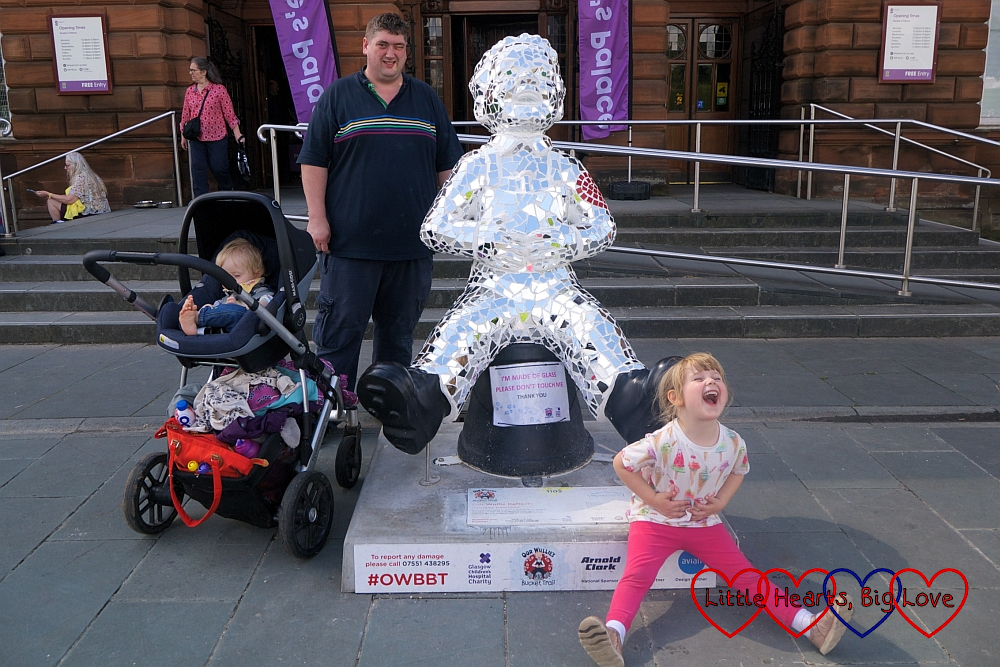 From Glasgow Green, we continued towards Merchant City, passing a police box along the way. “Look Sophie, it’s a TARDIS!” I said, but Sophie has yet to become a fan of Doctor Who and wasn’t quite as interested in it as Mummy was! We spotted a couple more police boxes on our walk around Glasgow – two blue ones and a red one near “the moon” where we were staying. 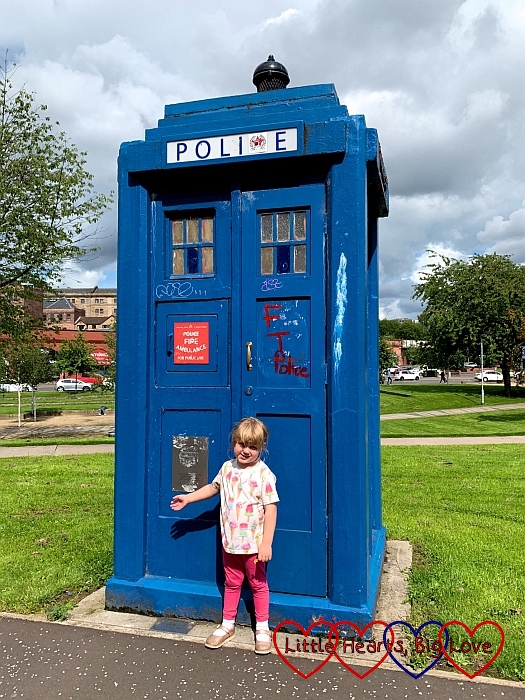 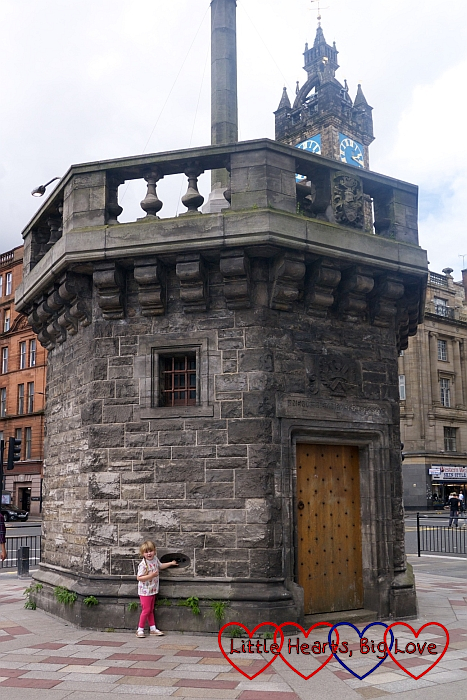 The rest of the Oor Wullies on our list were less spread out as we worked out way back towards Buchanan Galleries. I was glad we’d gone for the more spread out ones first as the short distances between the remaining Oor Wullies were much better for tired feet! I loved how Sophie copied the pose in her photos with a lot of the Oor Wullies. 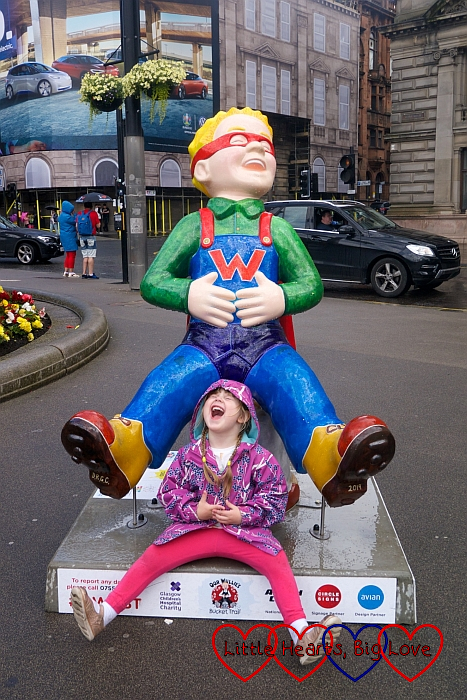 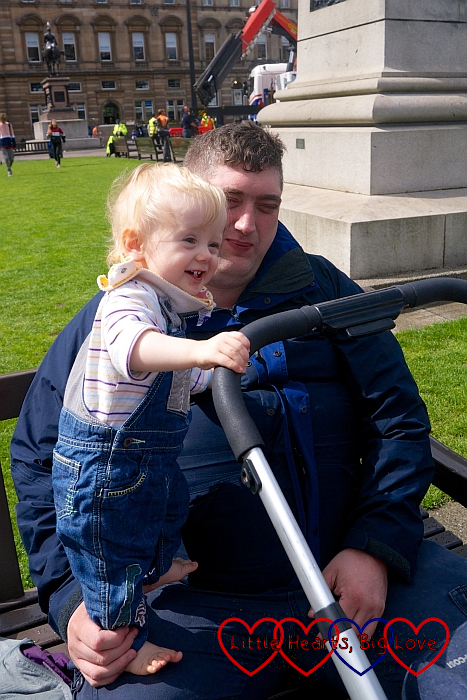 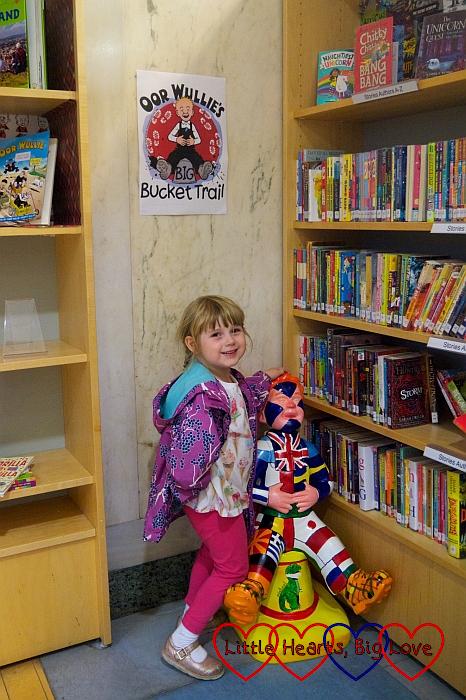 We finished off with a cluster of Oor Wullies at Buchanan Galleries – Oor Wullington who was next to a group of eight Wee Oor Wullies. Our final total for the day – 24 Oor Wullies and 43 Wee Oor Wullies making 67 in all. Not bad for one day! We’d pretty much found all the ones within reasonable walking distance – the others on the map would have required more time and probably a bus or subway ride to get to them. 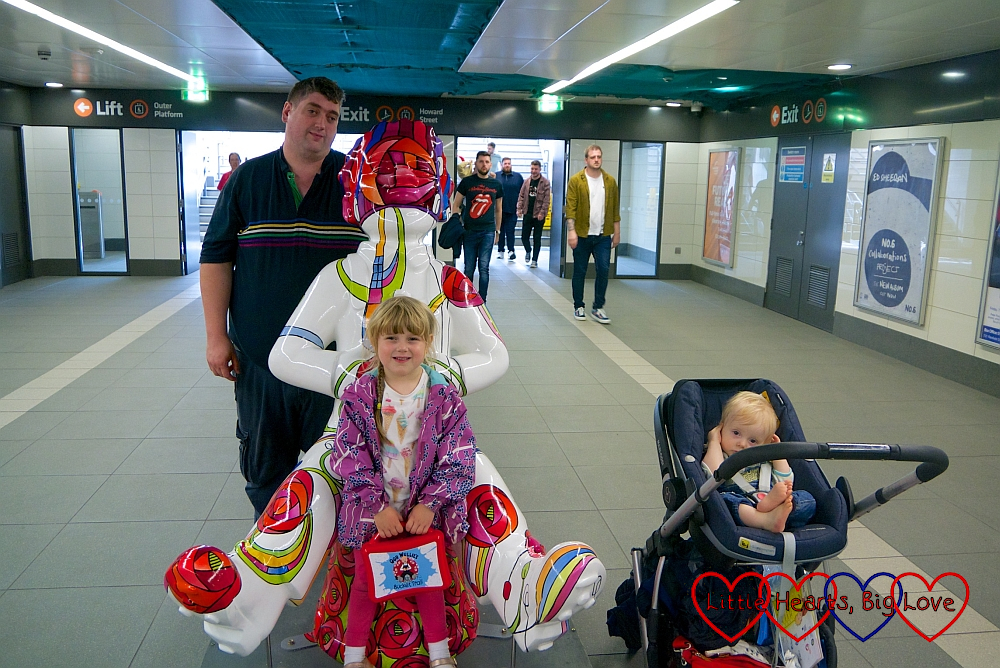 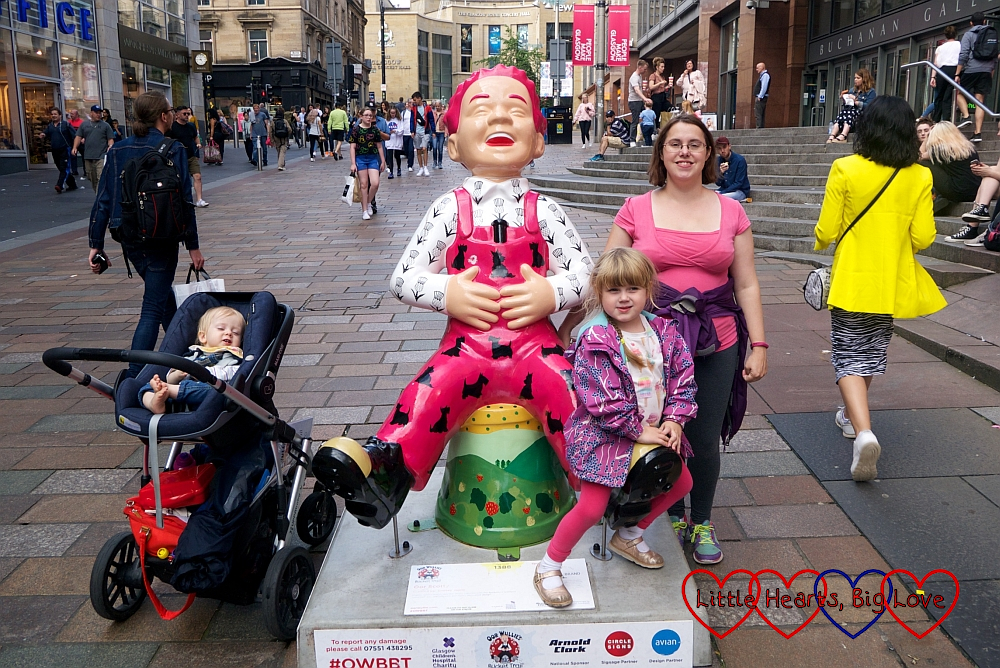 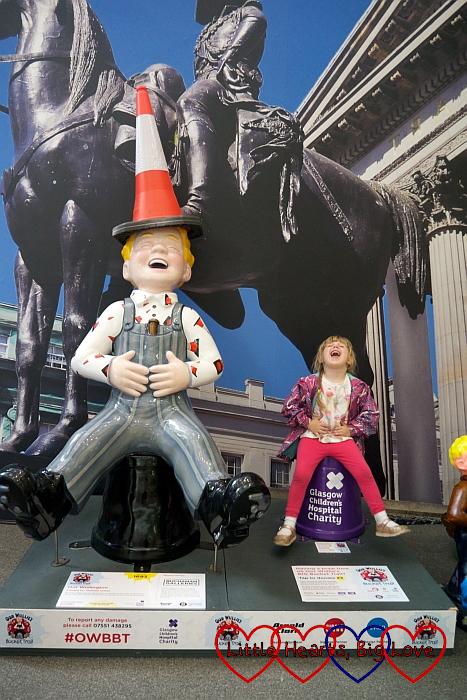 Sophie certainly enjoyed our hunt and was a little disappointed that we weren’t going to continue and find them all. While we tend to be quite determined to finish these kinds of trails, this one is just too big and too far away! We had managed to find more Oor Wullies than the average stated on the app though and that is good enough for me! 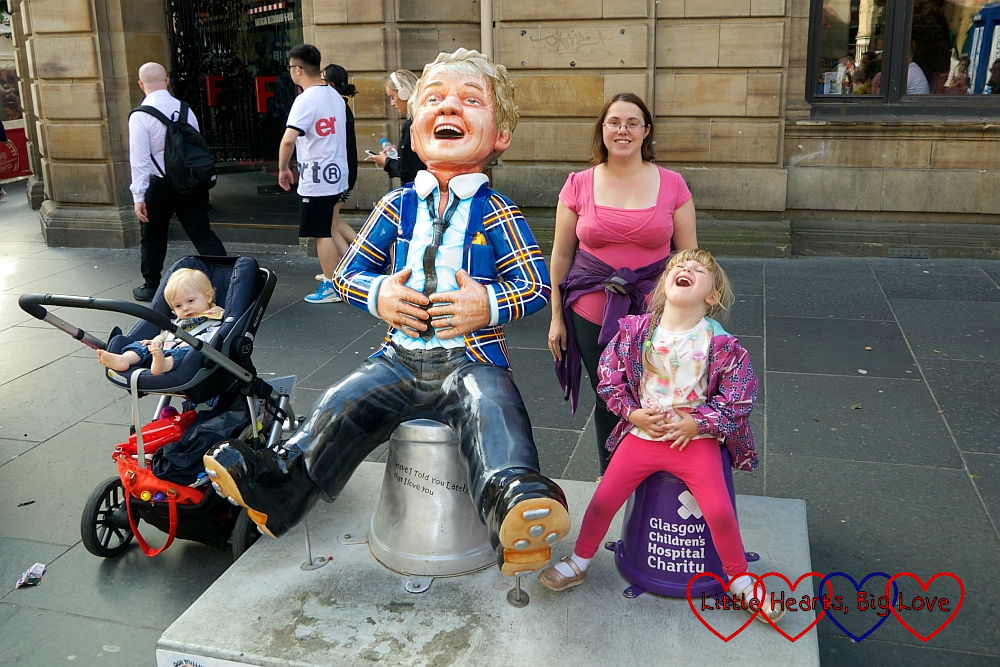