Sophie has suffered from eczema since around the time of her first birthday. At first I thought the dry patches on her wrists and cheeks were just irritation from the juice of the satsumas she had been eating at the time. I started using some baby moisturising cream on the dry areas although it didn’t seem to make much of difference. I wasn’t too concerned at the time though – Jessica had had a bout of very dry skin during the winter after her first birthday too and it had disappeared in the spring and never returned.

As the weeks went on though, it became clear that Sophie’s dry skin was worse than Jessica’s had been. We tried various products aimed at easing dry skin – paraffin-based bath products, emollients, moisturisers – a whole host of products that had been recommended by friends and family or the health visitor but none seemed very effective and a few of the products even made it worse. 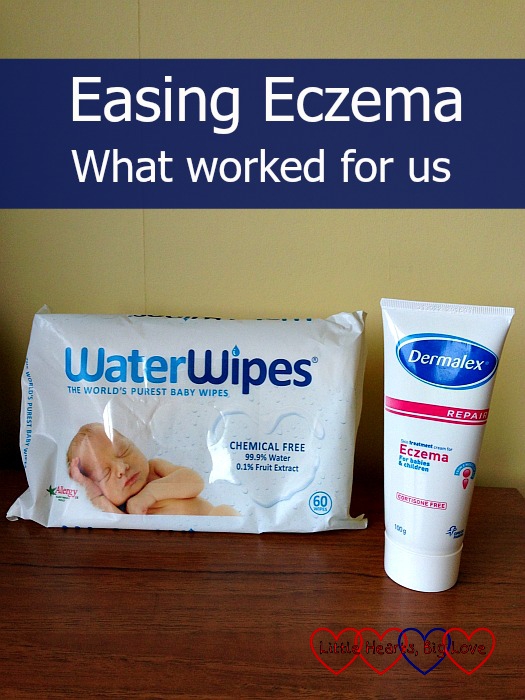 The most recent cream that we’ve tried is Dermalex Repair skin treatment cream for eczema in babies and children. Since we started using it, Sophie’s skin has improved considerably and whilst she still gets the occasional red, dry patches on her cheeks and arms (mostly after mealtimes when she has been smearing food everywhere!), these occur much less frequently than they have done previously.

Dermalex Repair is a cream aimed at treating mild to moderate atopic dermatitis and eczema in babies (over 8 weeks) and children. According to the information leaflet, it does not contain corticosteroids, calcineurin inhibitors, artificial colouring, perfumes or parabens. It’s available in Boots (where we bought it) or Lloyds pharmacy at £11.99 for 30g or £24.99 for 100g although you may be able to get it on prescription if needed.

The other product that we switched to that also seems to have made a real difference is WaterWipes wet wipes. These are chemical free wet wipes, endorsed by Allergy UK, containing 99.9% water and 0.1% citrus grandis seed extract. I have found these to be considerably less irritating to Sophie’s skin than any other brand of wipe I have tried and the difference has been quite noticeable on the few occasions I have had to use other wipes (even the hypoallergenic, fragrance free ones). They are a little more expensive than the other wipes we have previously used, costing around £2.49 a packet, although we now buy them through subscribe and save on Amazon at £18.99 for a box of nine.

Disclaimer: This post is not written in collaboration with any of the brands mentioned or to provide medical advice – I am purely sharing my experience on what products have worked for us with easing eczema. If you require medical advice with regards to eczema treatment then you should contact your pharmacist, GP or another healthcare professional.

13 thoughts on “Easing eczema – what worked for us”